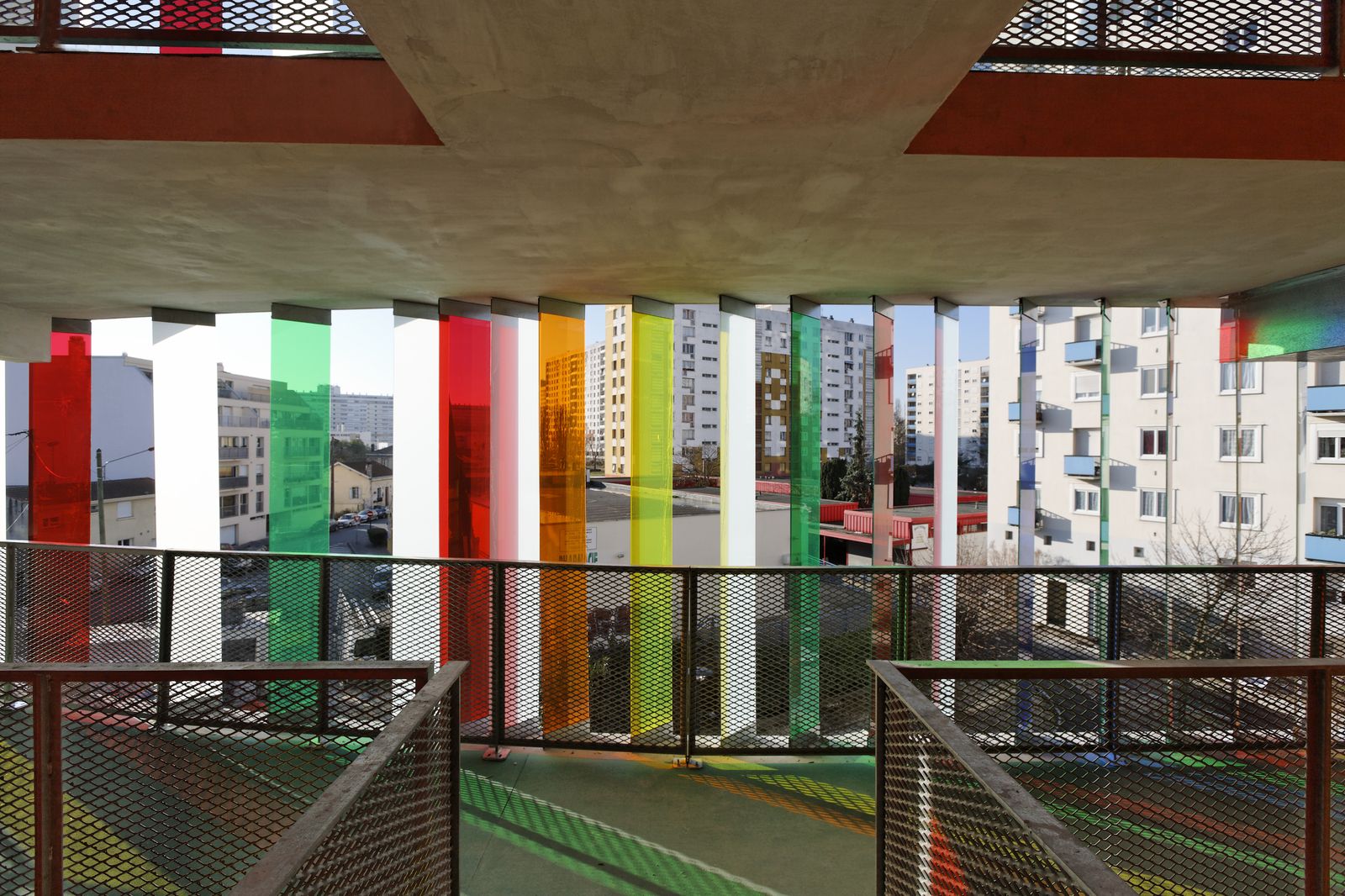 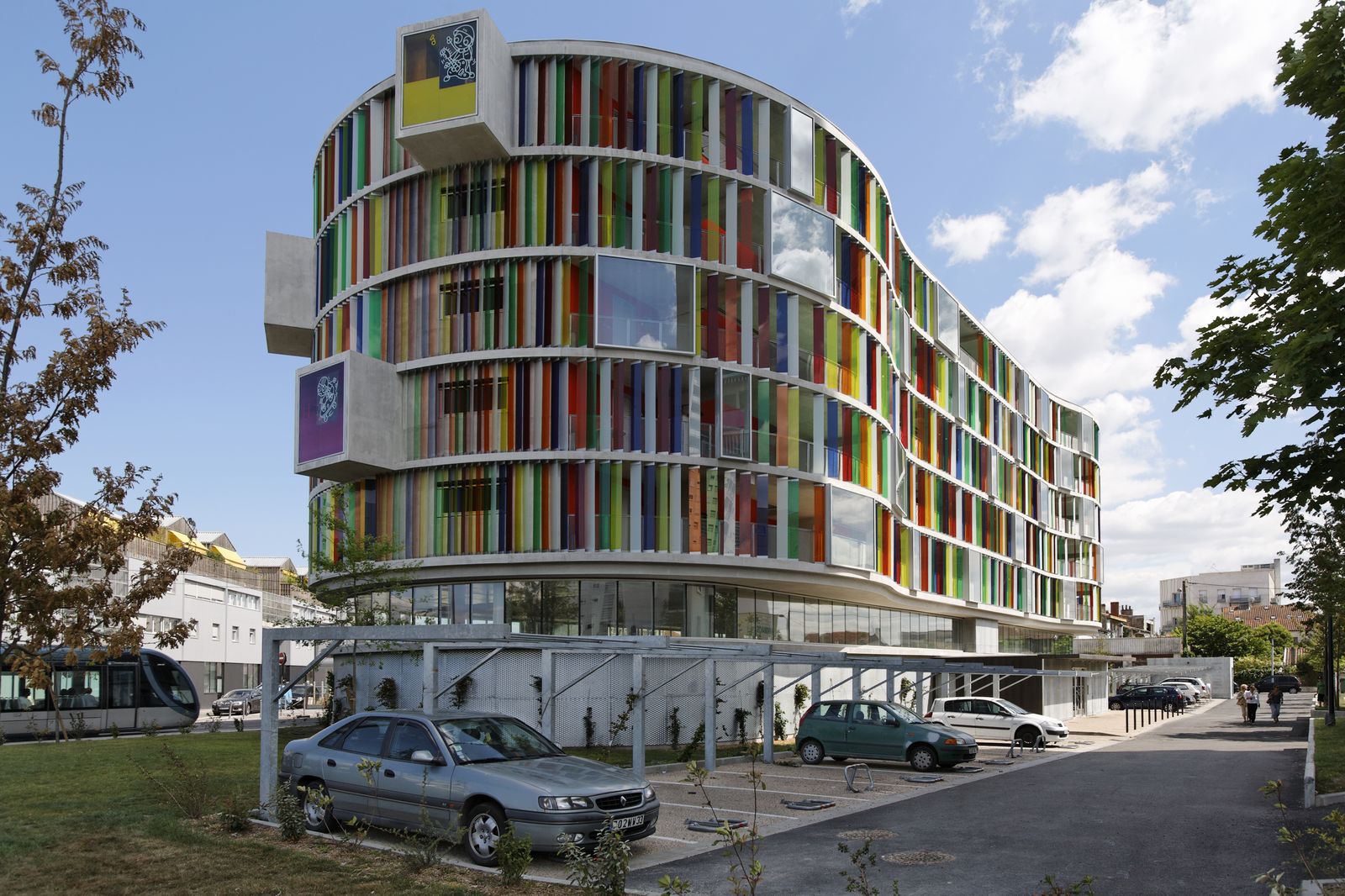 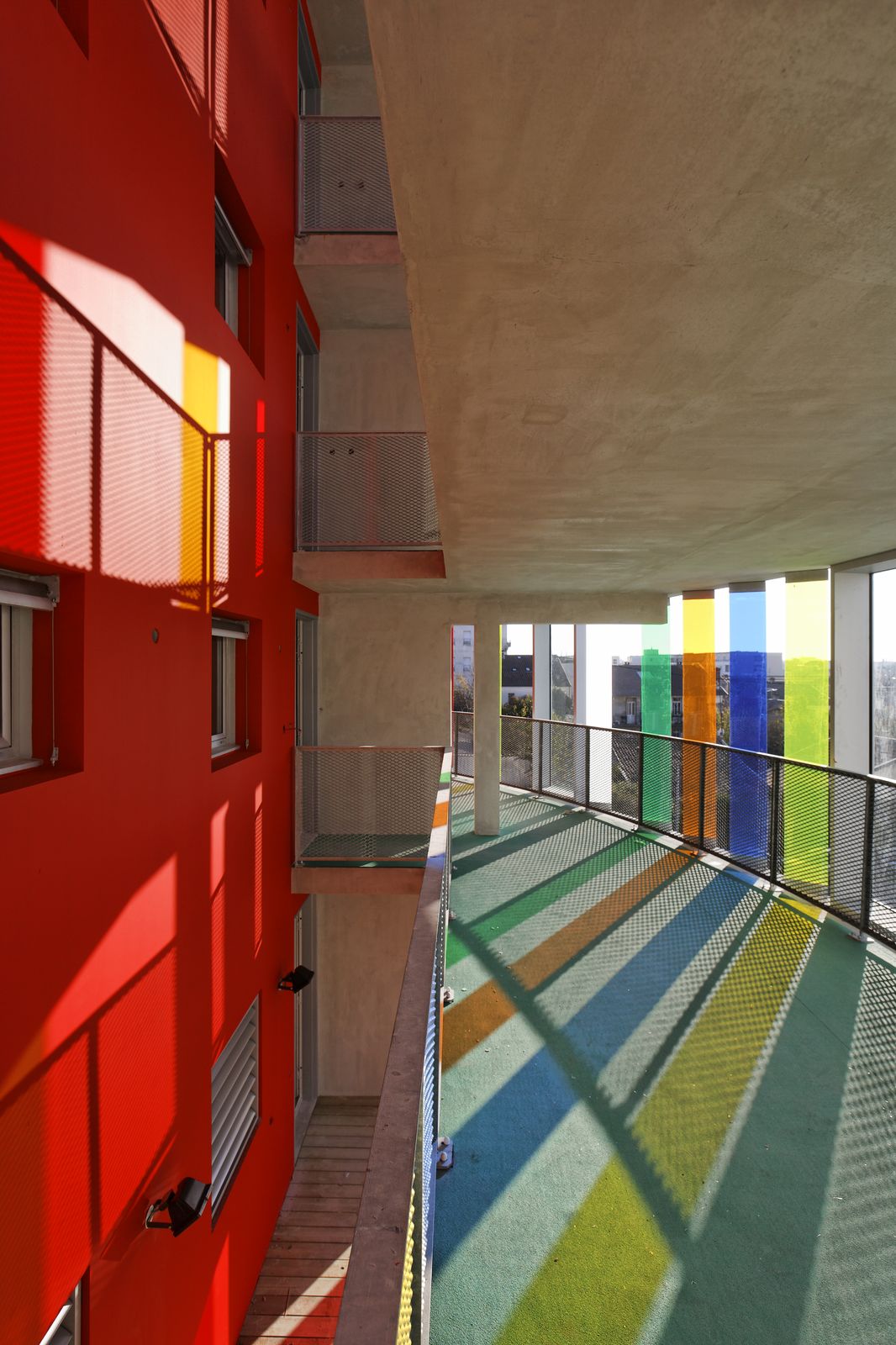 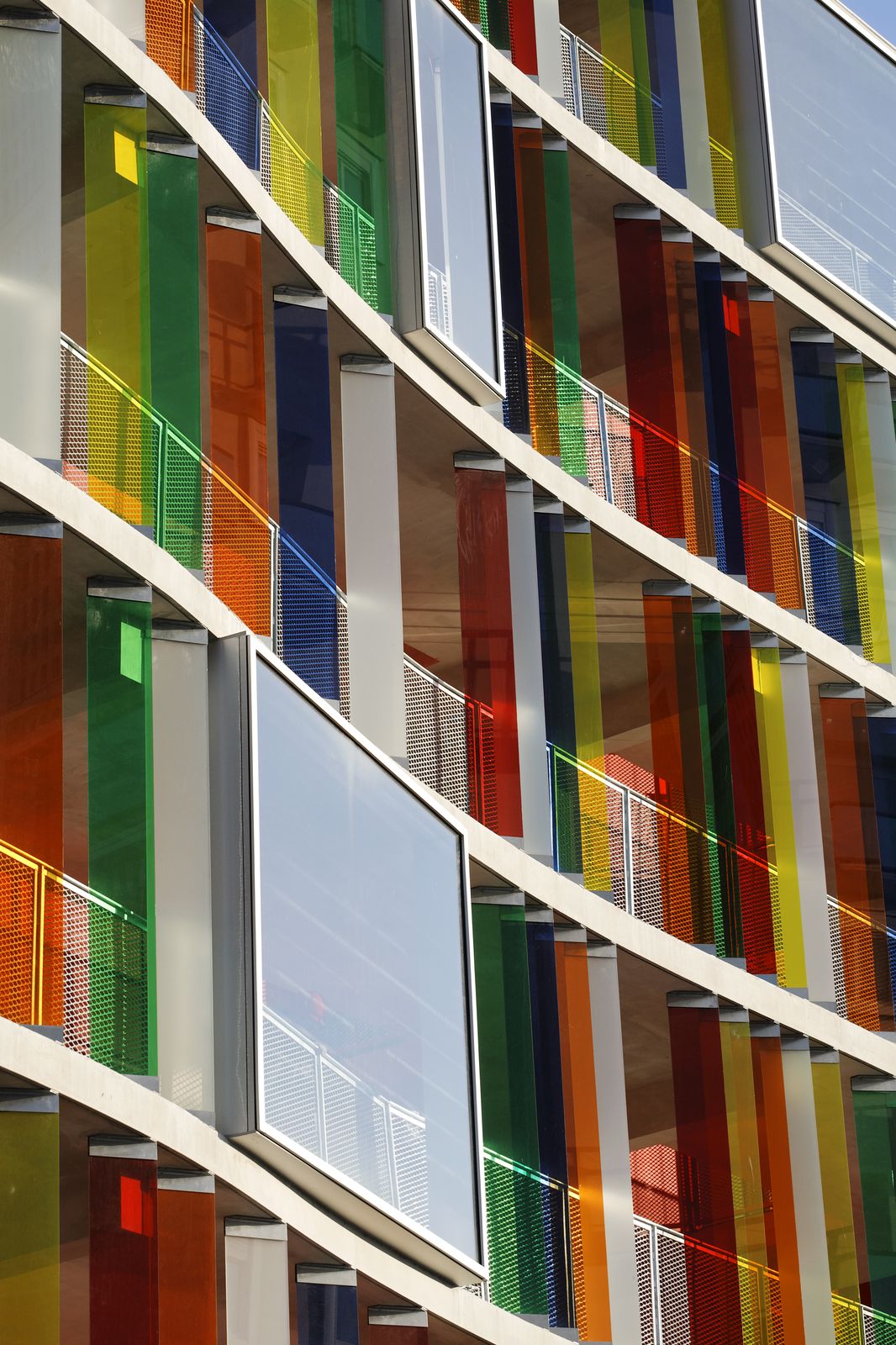 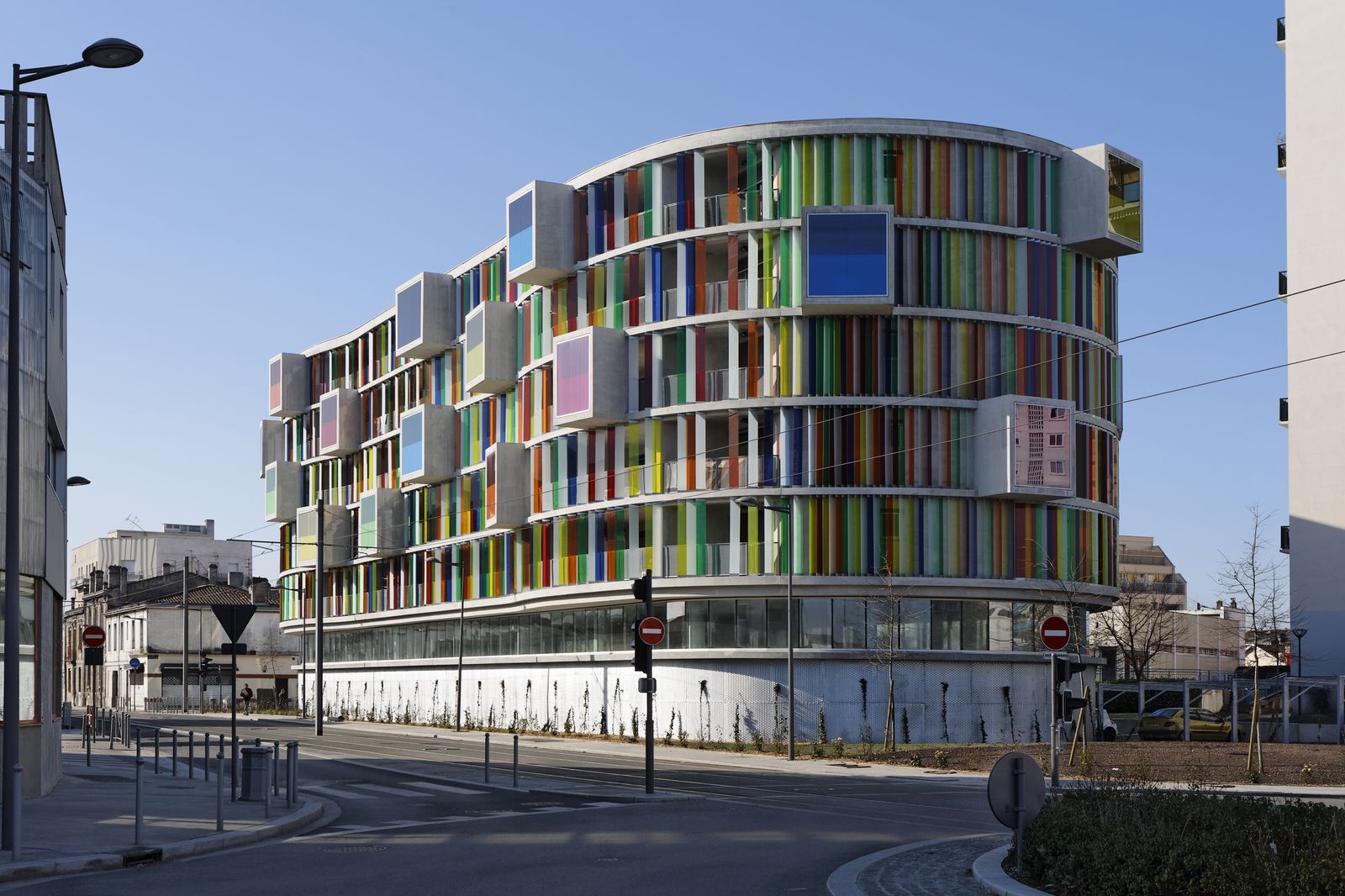 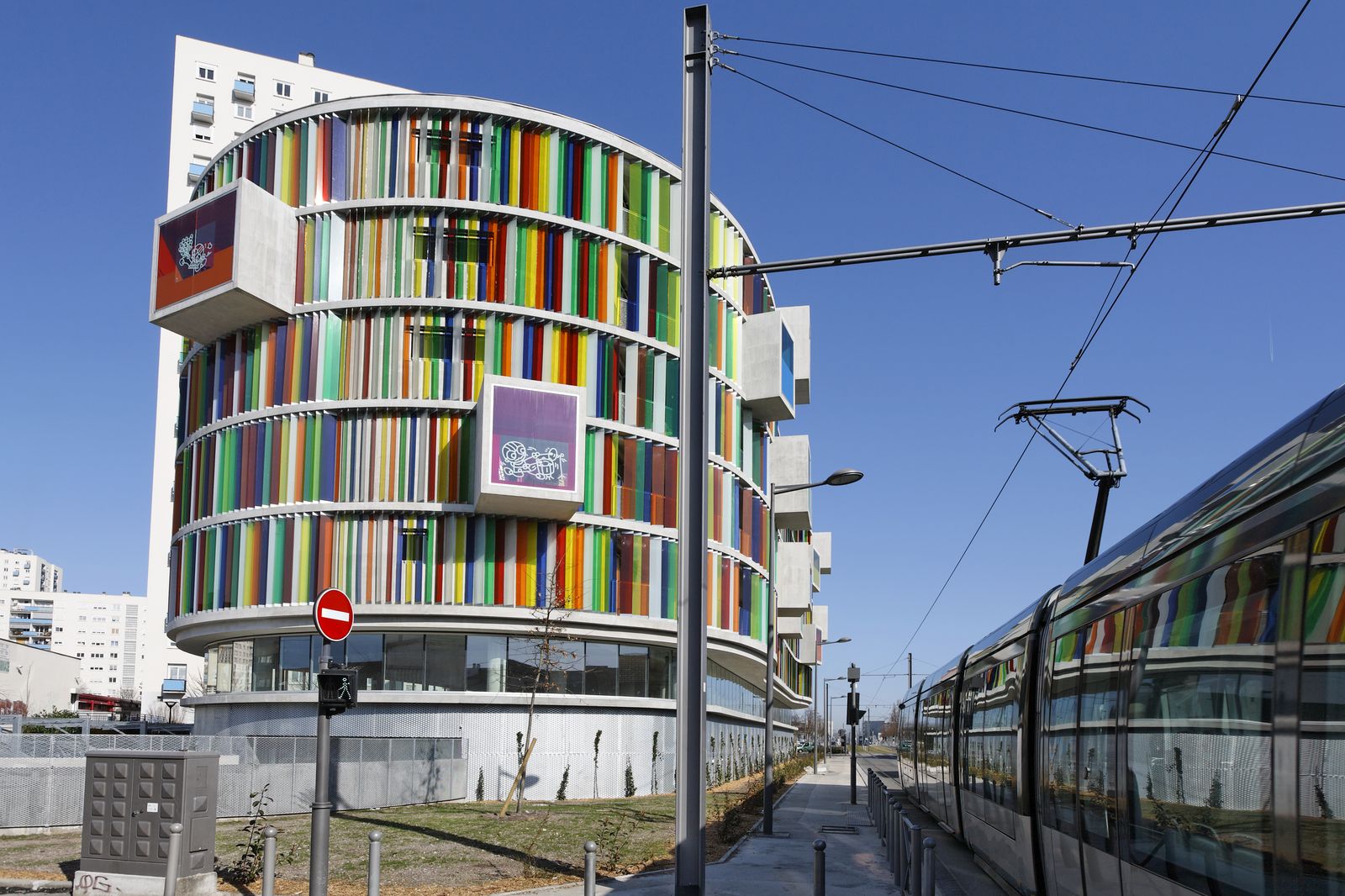 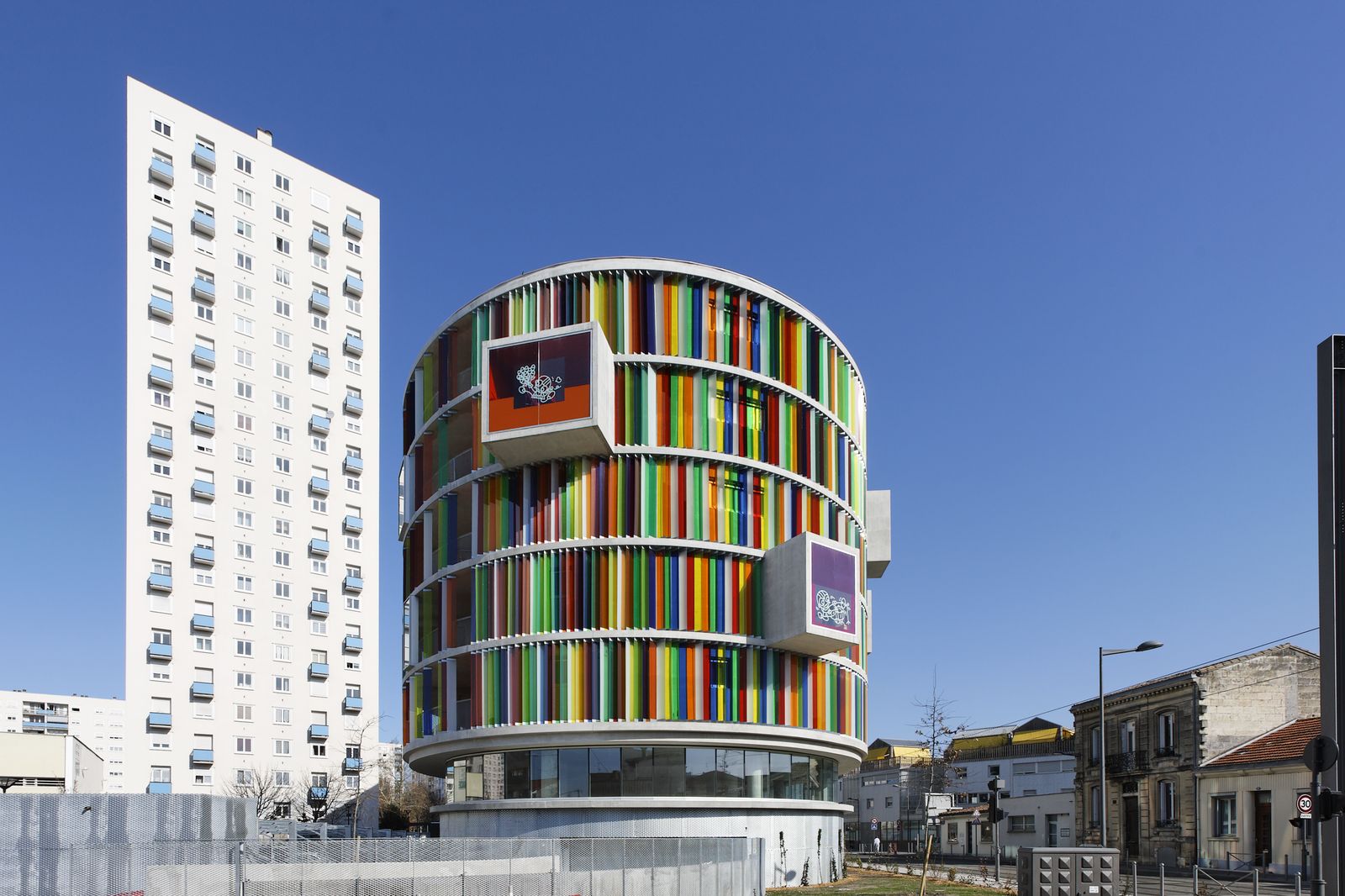 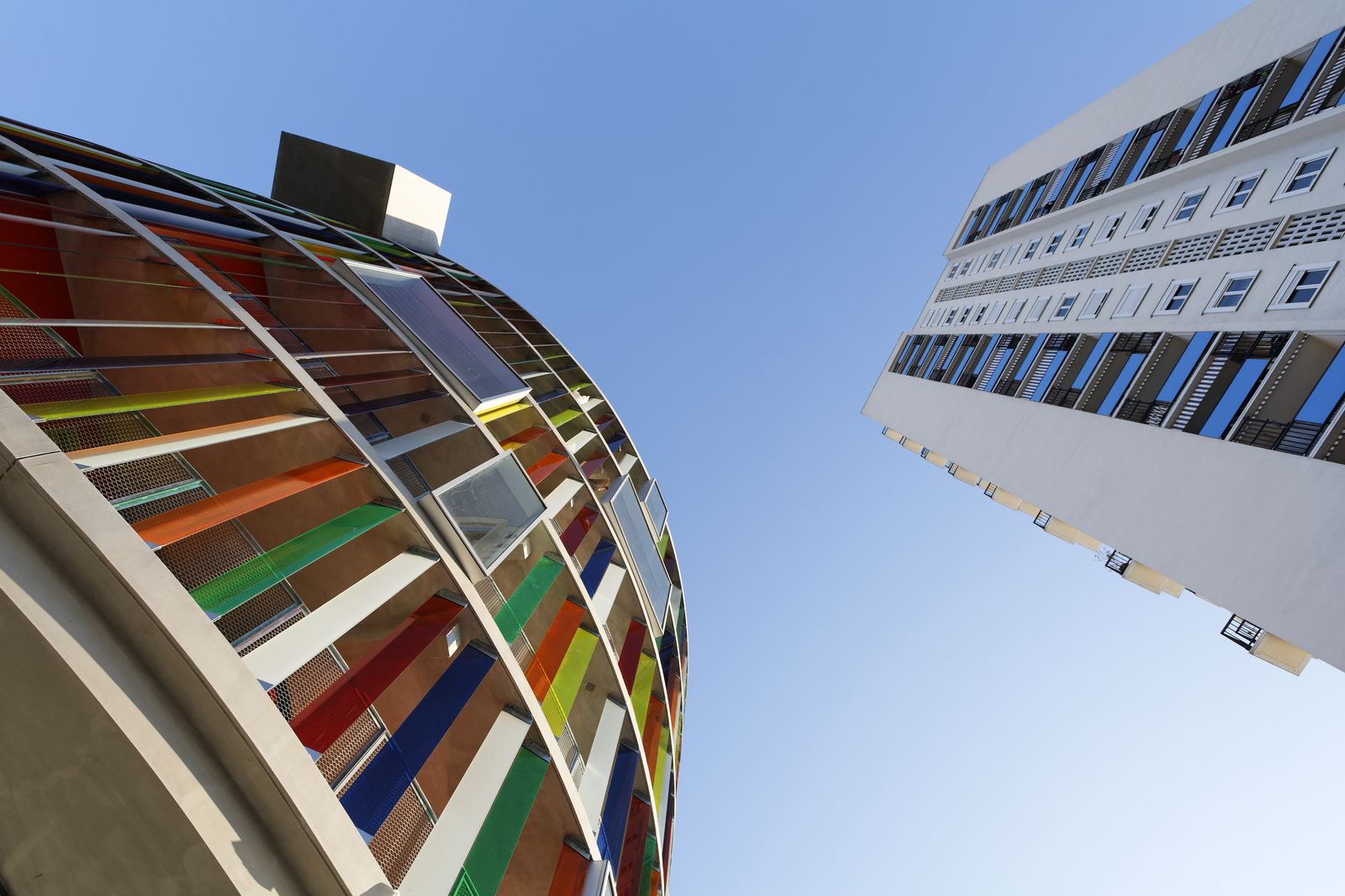 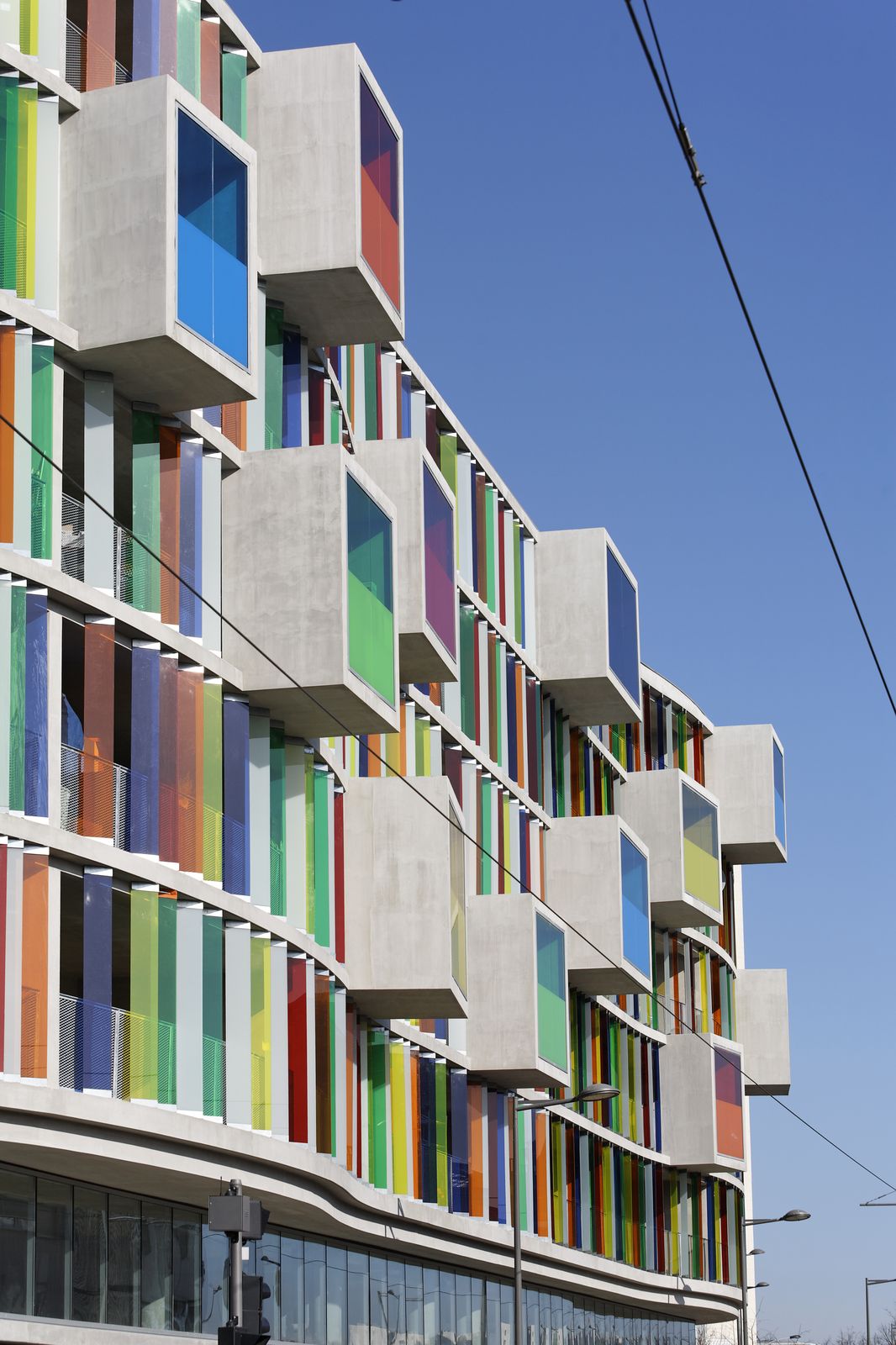 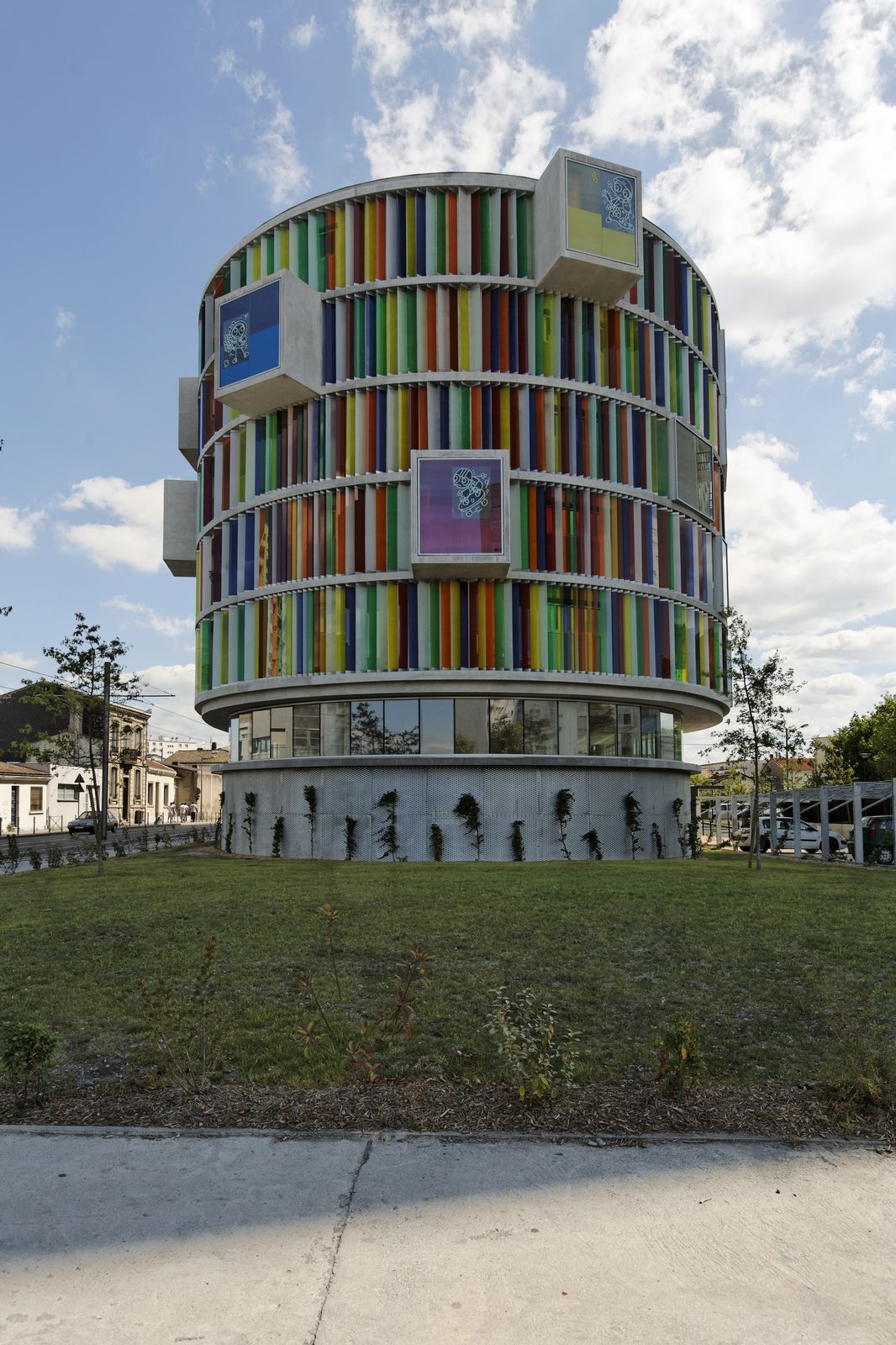 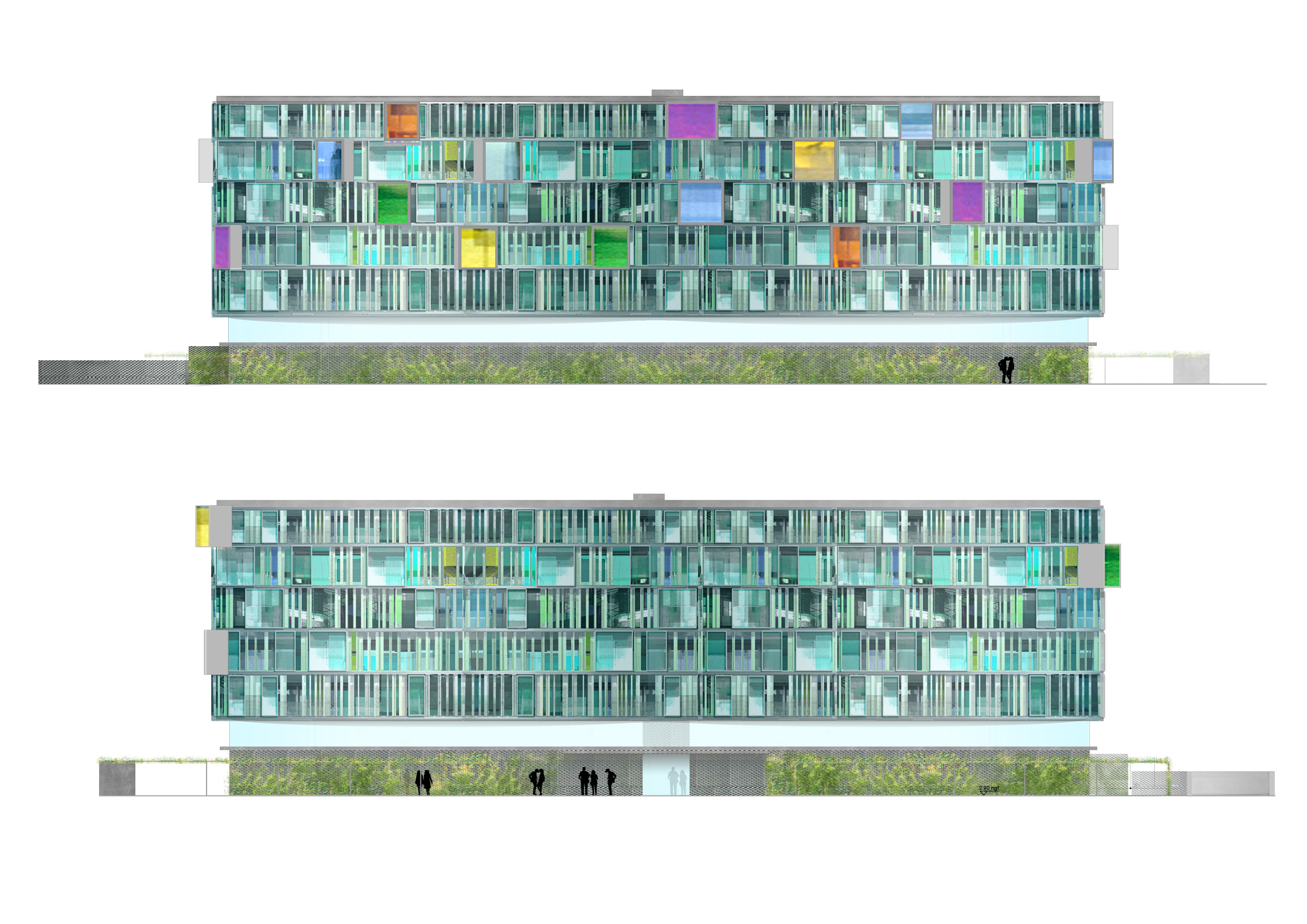 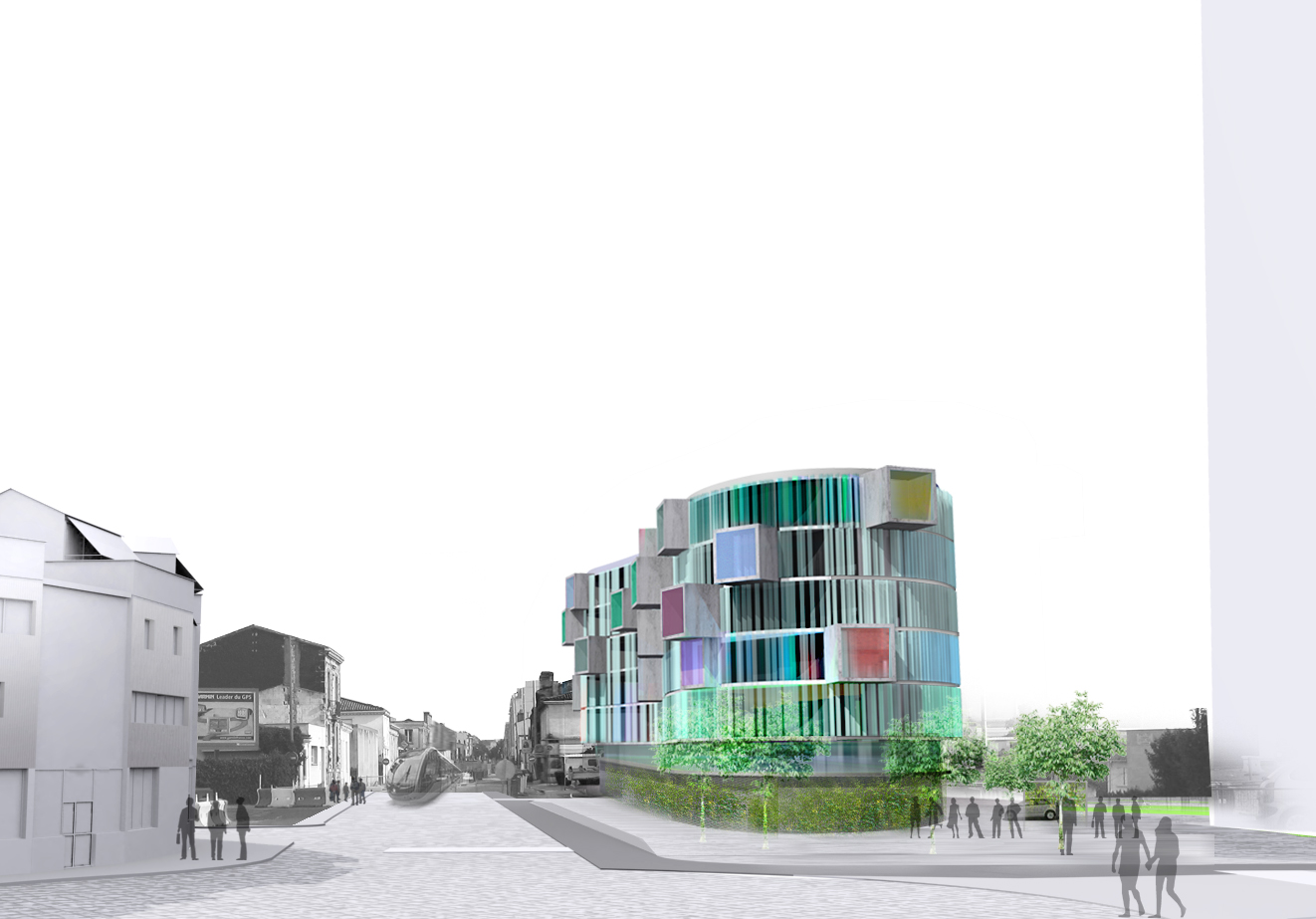 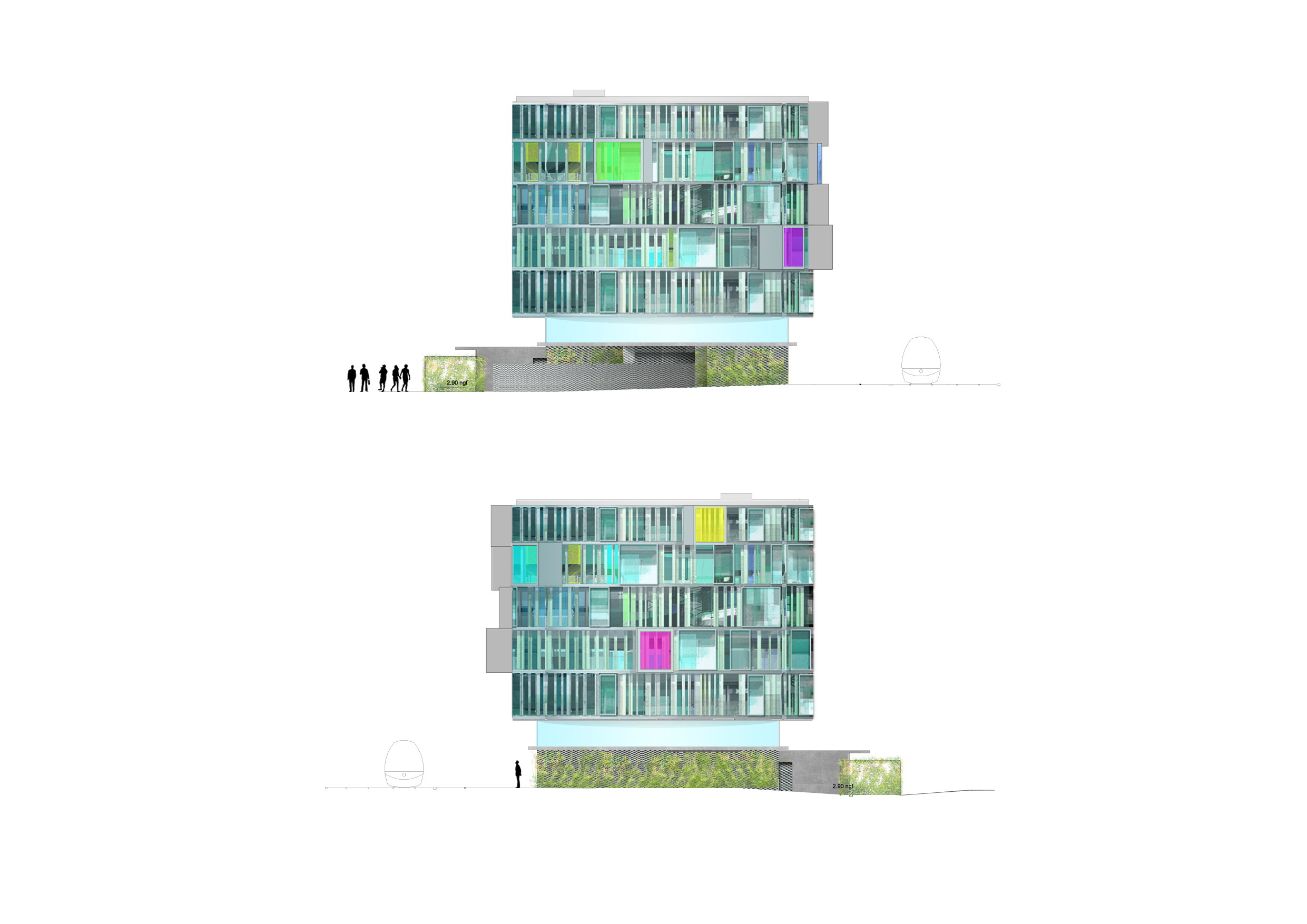 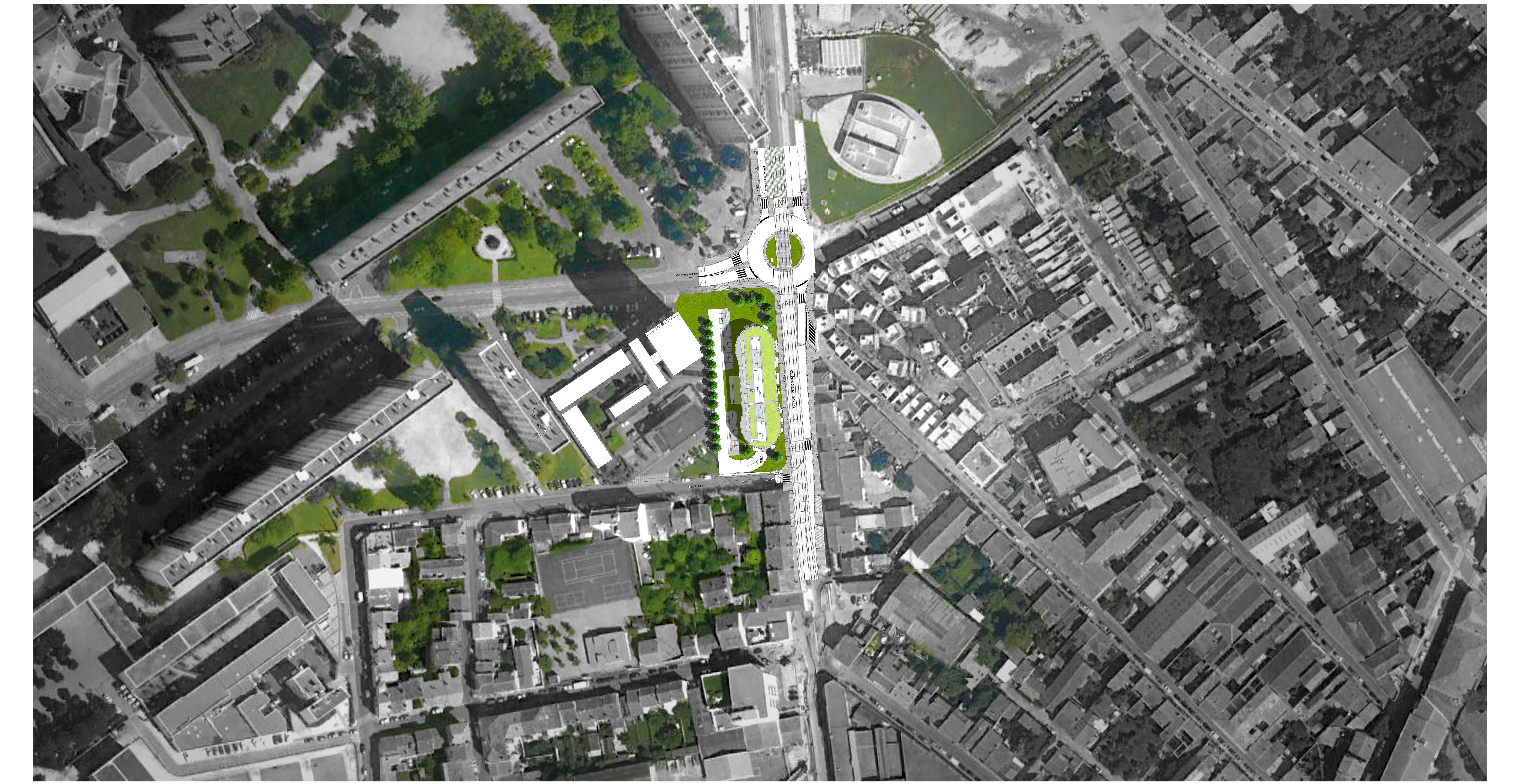 Recommending party
The project has been submitted by: Agence Bernard Buhler

Of which residential: 82%
Public/communal areas:
Facilities for the public:
Business/trade:
Offices: 18 %

The project “Arc en Ciel” expands at the entrance to the neighborhood of Grand Park, to the corner of rue Portmann Huyard and Avenue Emile Counord in Bordeaux. The building, unusual in the neighborhood by its curved shape and colorful, hosts about forty homes and offices.

Positioned at an intersection and near a shopping center (which is part of a renovation project), it must manage its urban context, the flow of cars, tramway flows and thus pedestrians flows. This concentration has led to the creation of a square mineral easing movement and allowing the building to sit in the continuity of the public domain.

In appearance, the group consists of three layers:
– The ground floor: A grid of expanded metal wraps and mask a parking on half level of around thirty parking spaces. The grid that protects the ground floor of shots and theft will be a support for climbing plants.
– The R+1: This level is fully glazed office space. He comes to transition between the ground (traffic, pedestrian) and dwellings.
– R+2 and R+6: 5 levels of bands of colored glass STADIP, divided by the floor, wrap the housing part of the collective. Colored boxes out of the front and just break the rhythm of stained slides. We will see later that these advances are extensions of terraces or appartments.

Despite this skin that wraps entirely around the building, there are indeed two different facades. It may be noted that the colored boxes that appear on three facades. Indeed, there are no boxes on the Part circulation and housing service.

This corridor, which could be a handicap, create spaces for open meetings, lighted and ventilated. This will also help create housing traversing. Indeed, housing open on one side to the loggia and the other on the gangway, the latter being recessed relative to the openings to prevent access and for the privacy (see Figure 3). We are committed to be assigned to different apartments real spatial quality, they have a double orientation, living areas are well lit well.

This skin consists of vertical strips of colored glass STADIP leads to the building interior spaces qualitative acting as buffers between the city and housing; We are privatizing the living areas and away from the urban context, without obscure the view to the environment who’s possible through the windows of balconies but also through the space between each blade.

We had, as explained earlier, a special attention to the creation of housing themselves, in order to improve the quality of life. By reducing traffic, we decorated the living spaces. Note that the stays are systematically turned to the loggias, this allows the housing to benefit from any natural light necessary.