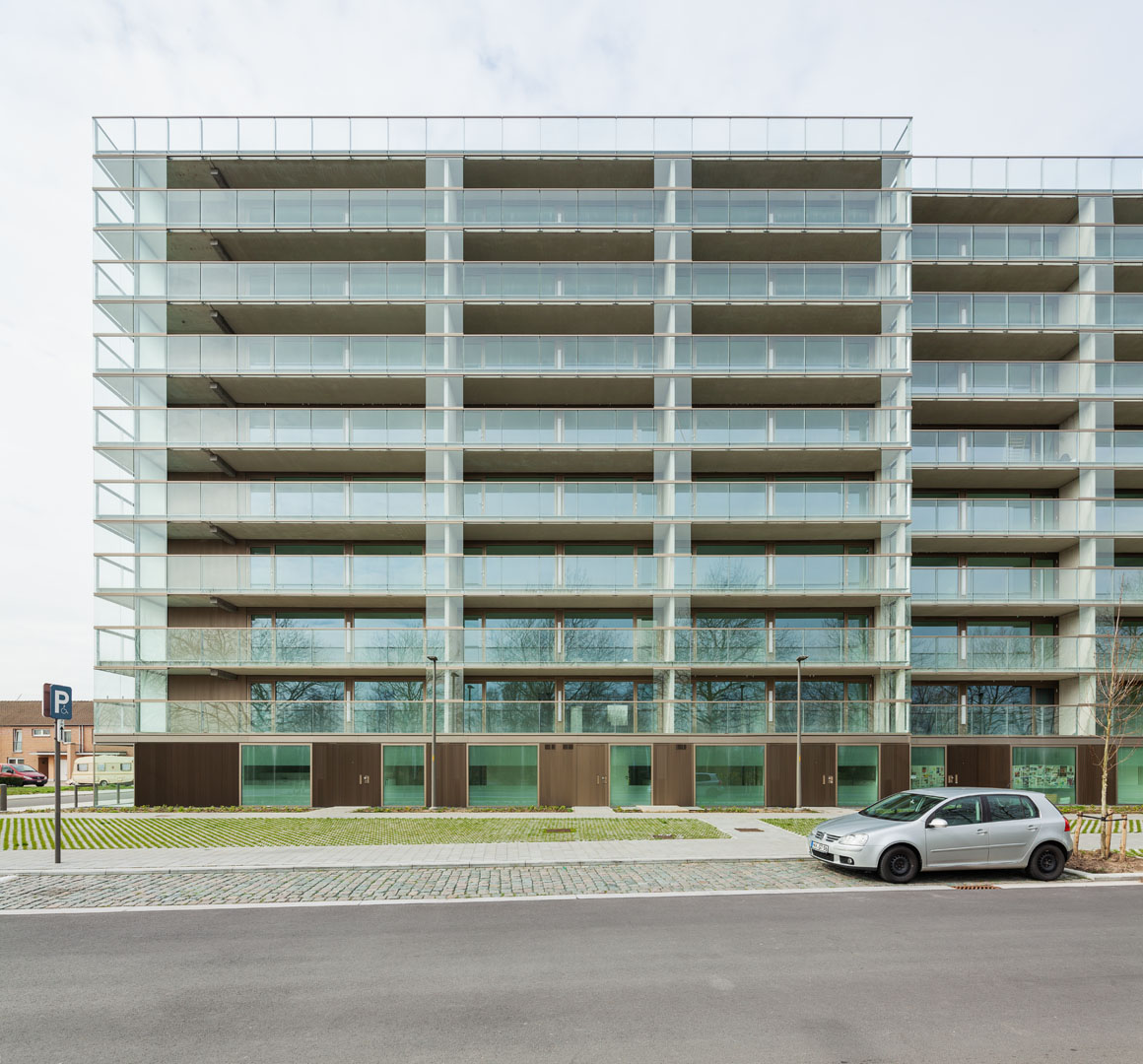 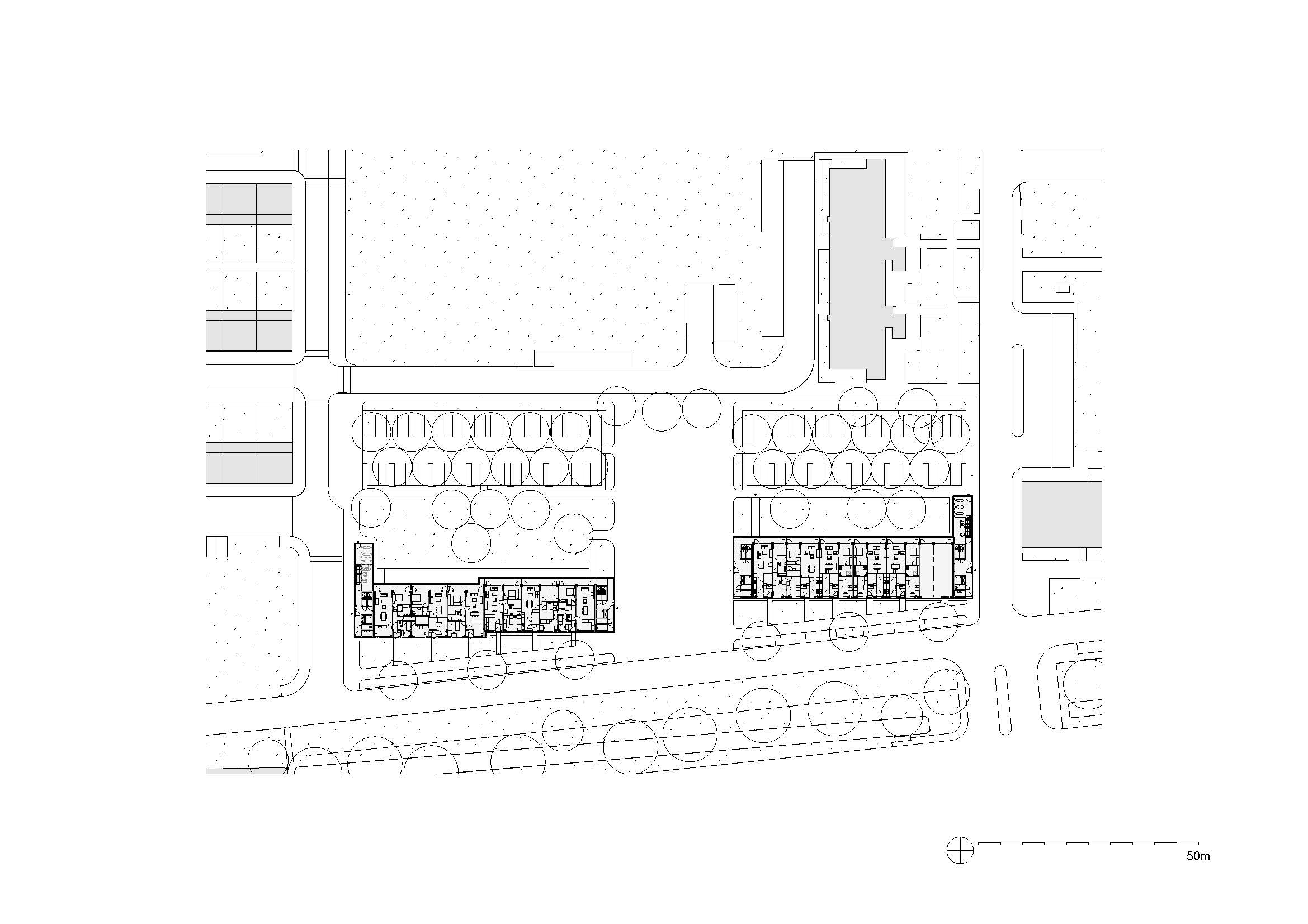 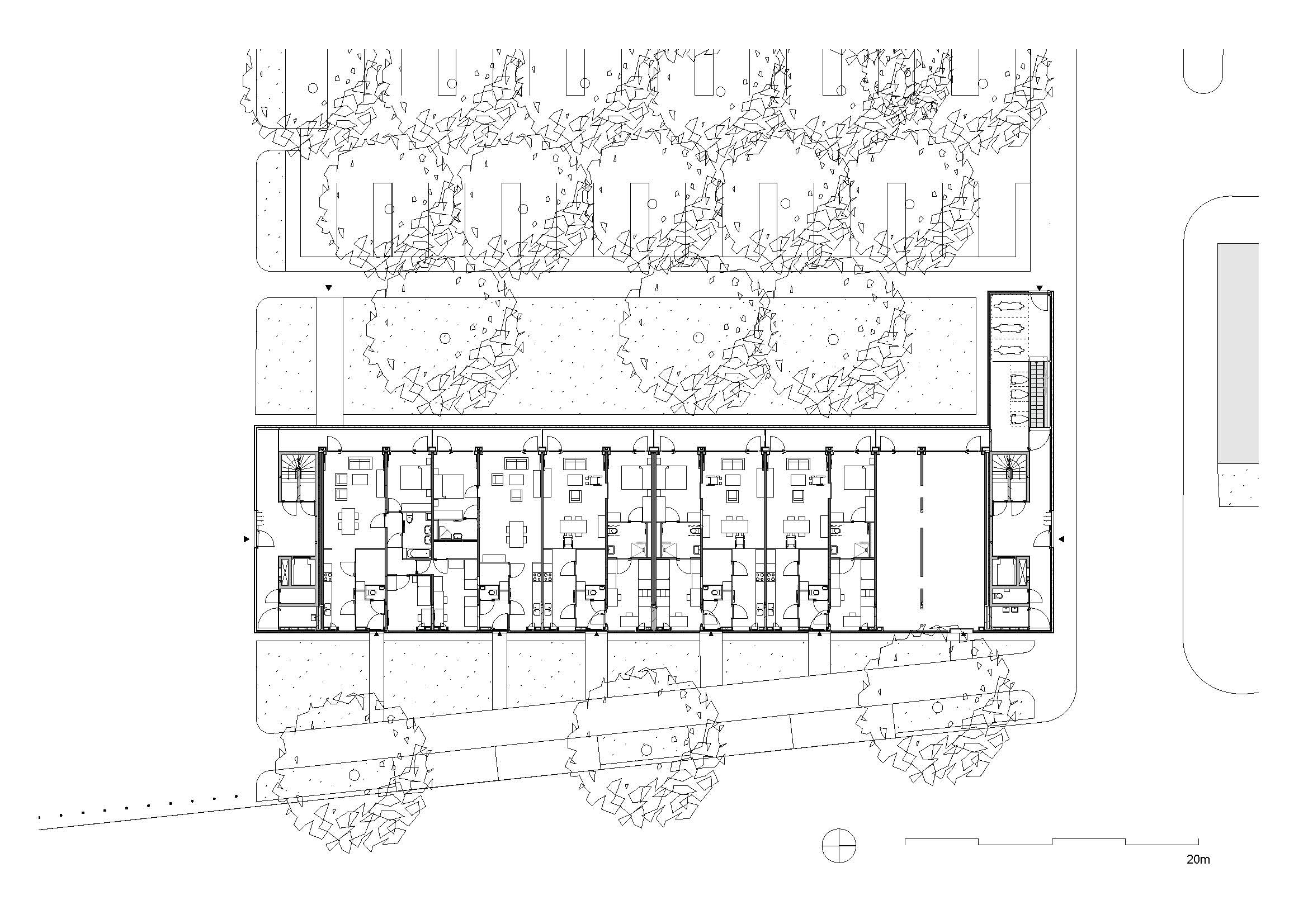 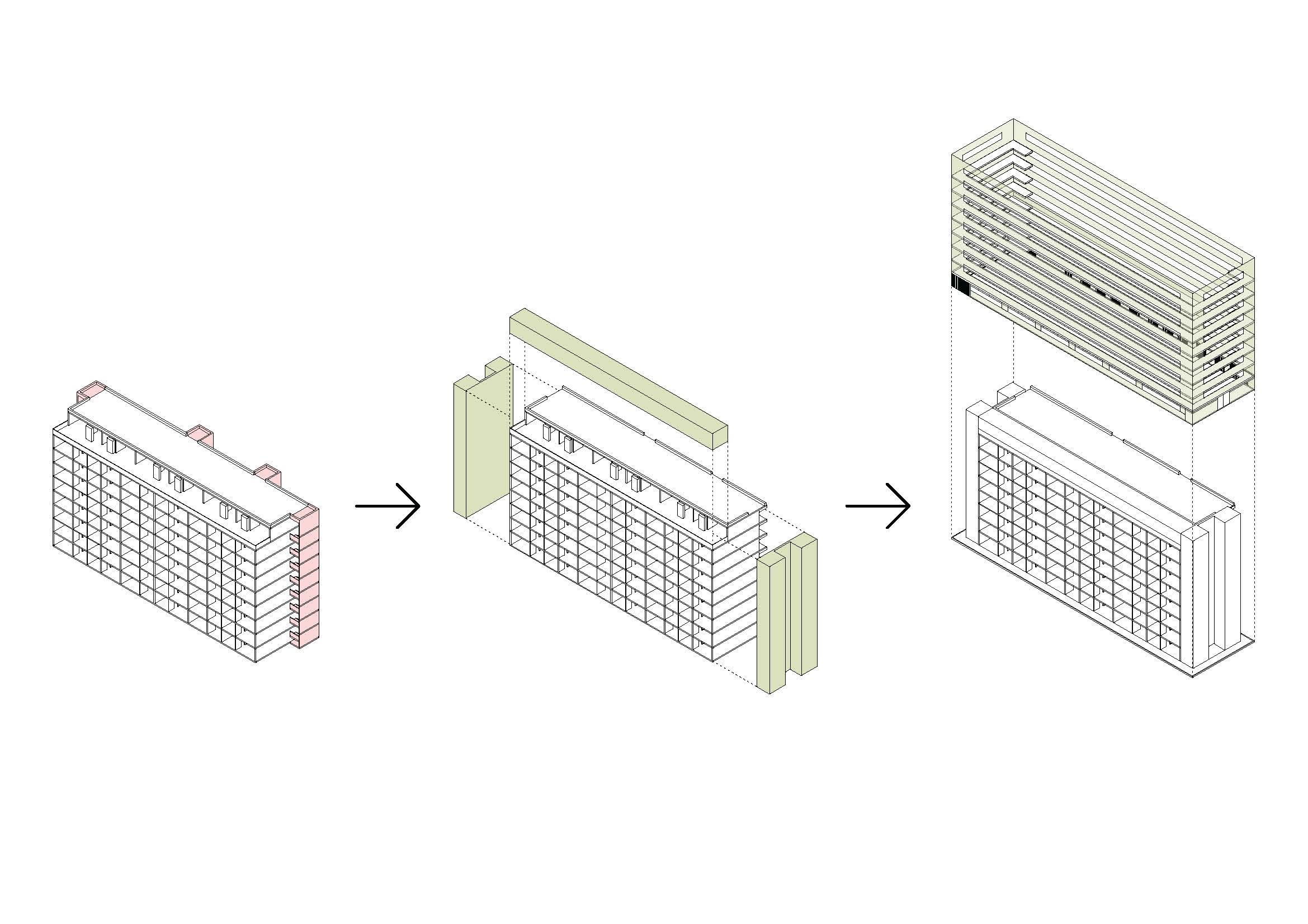 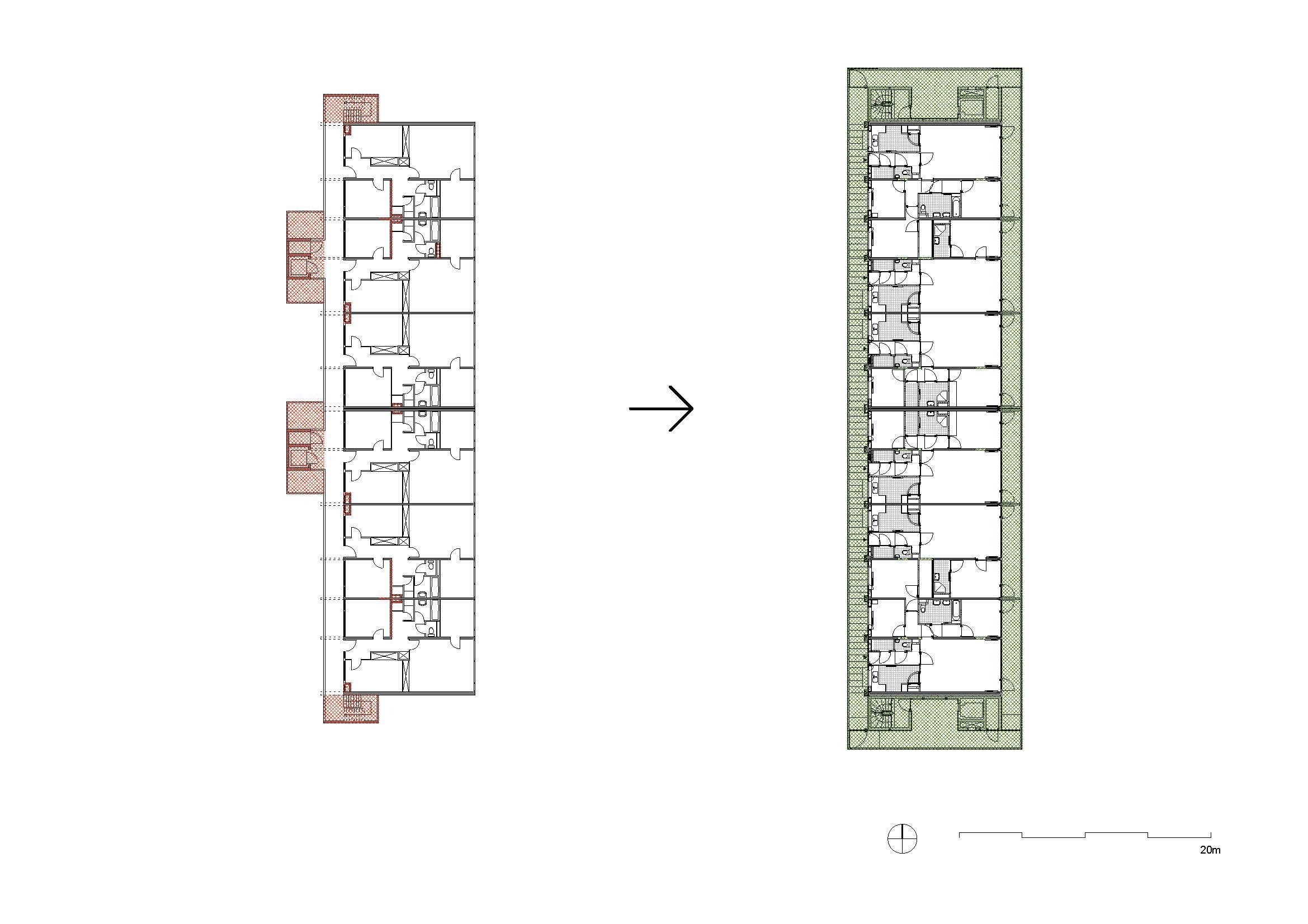 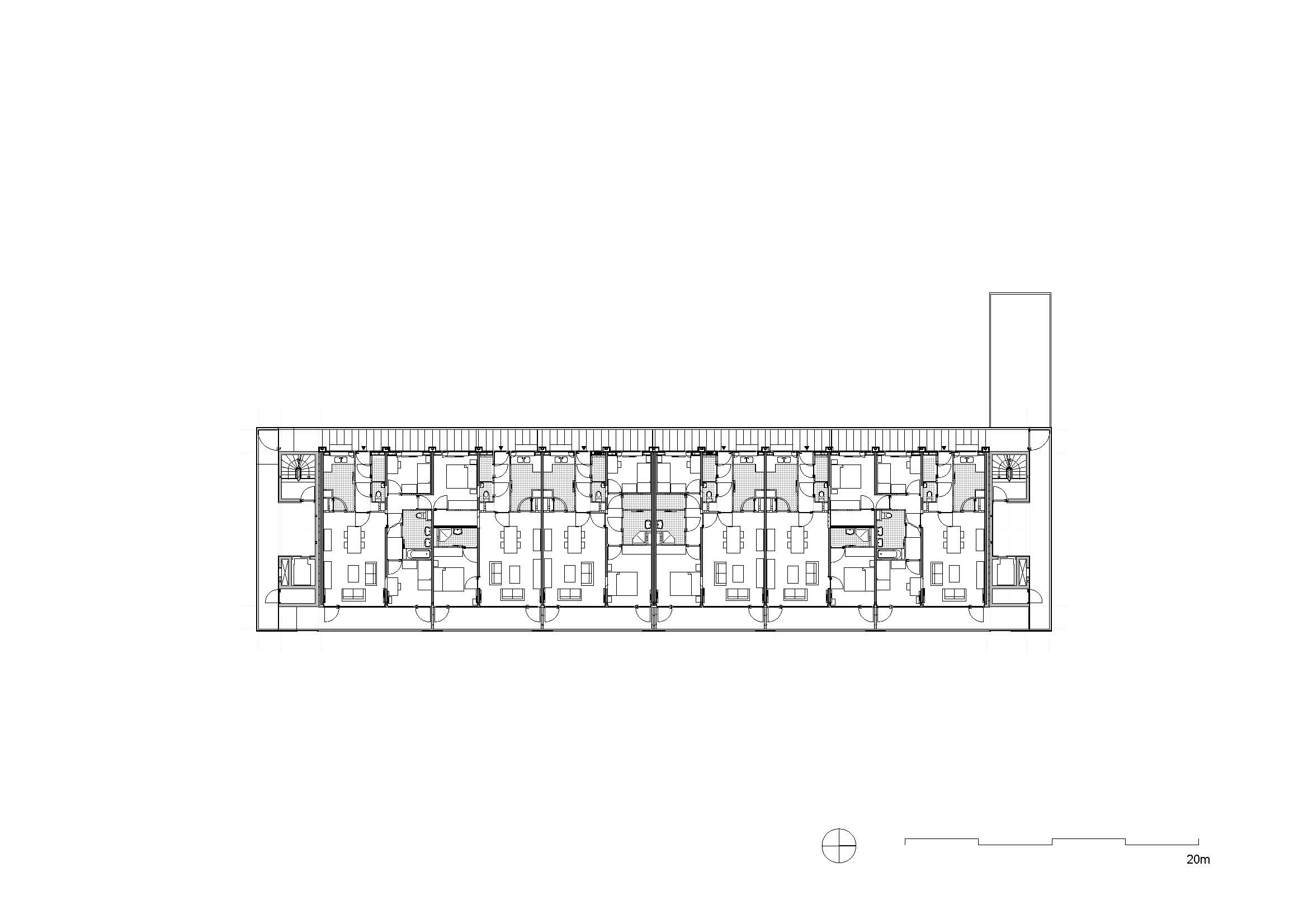 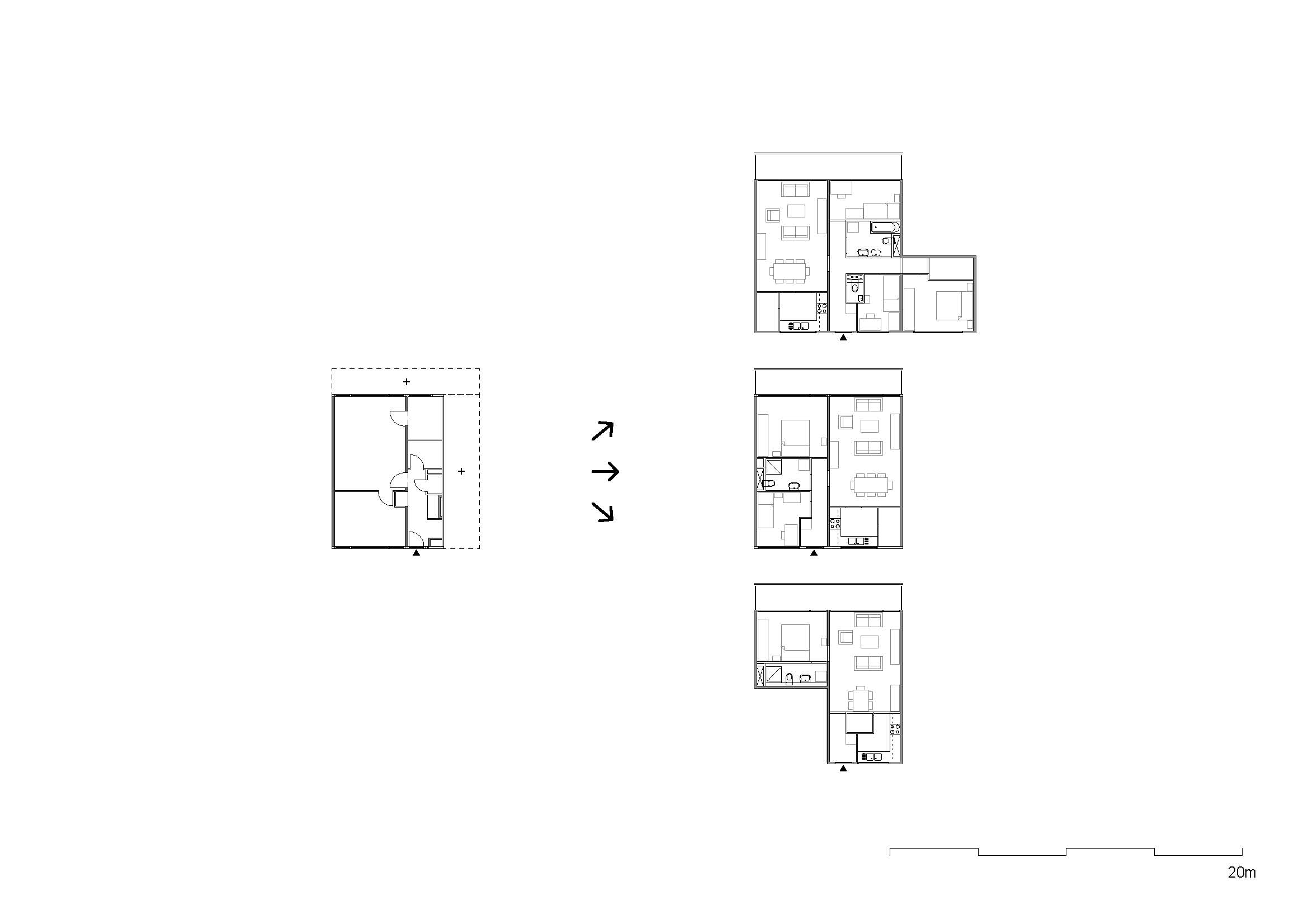 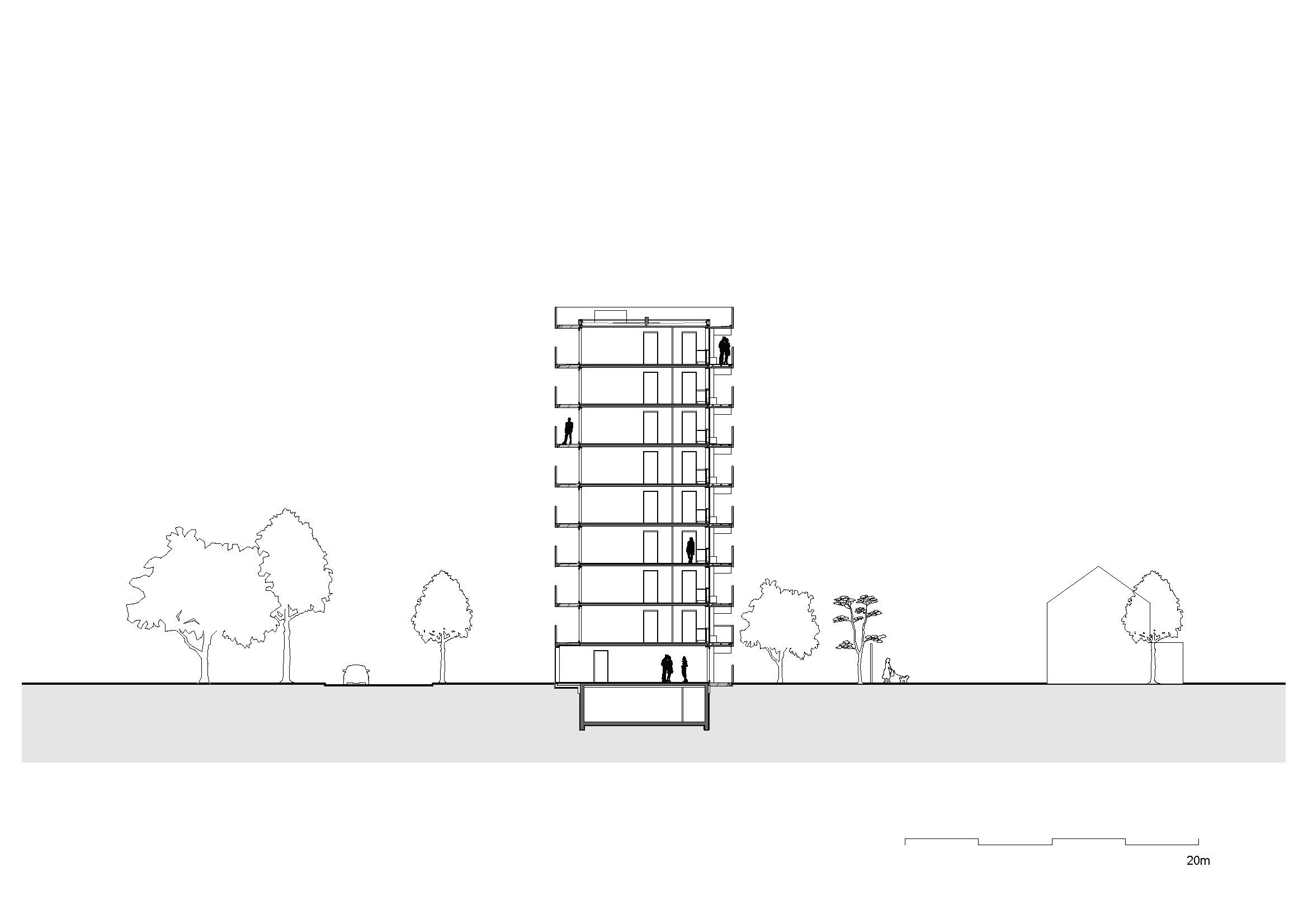 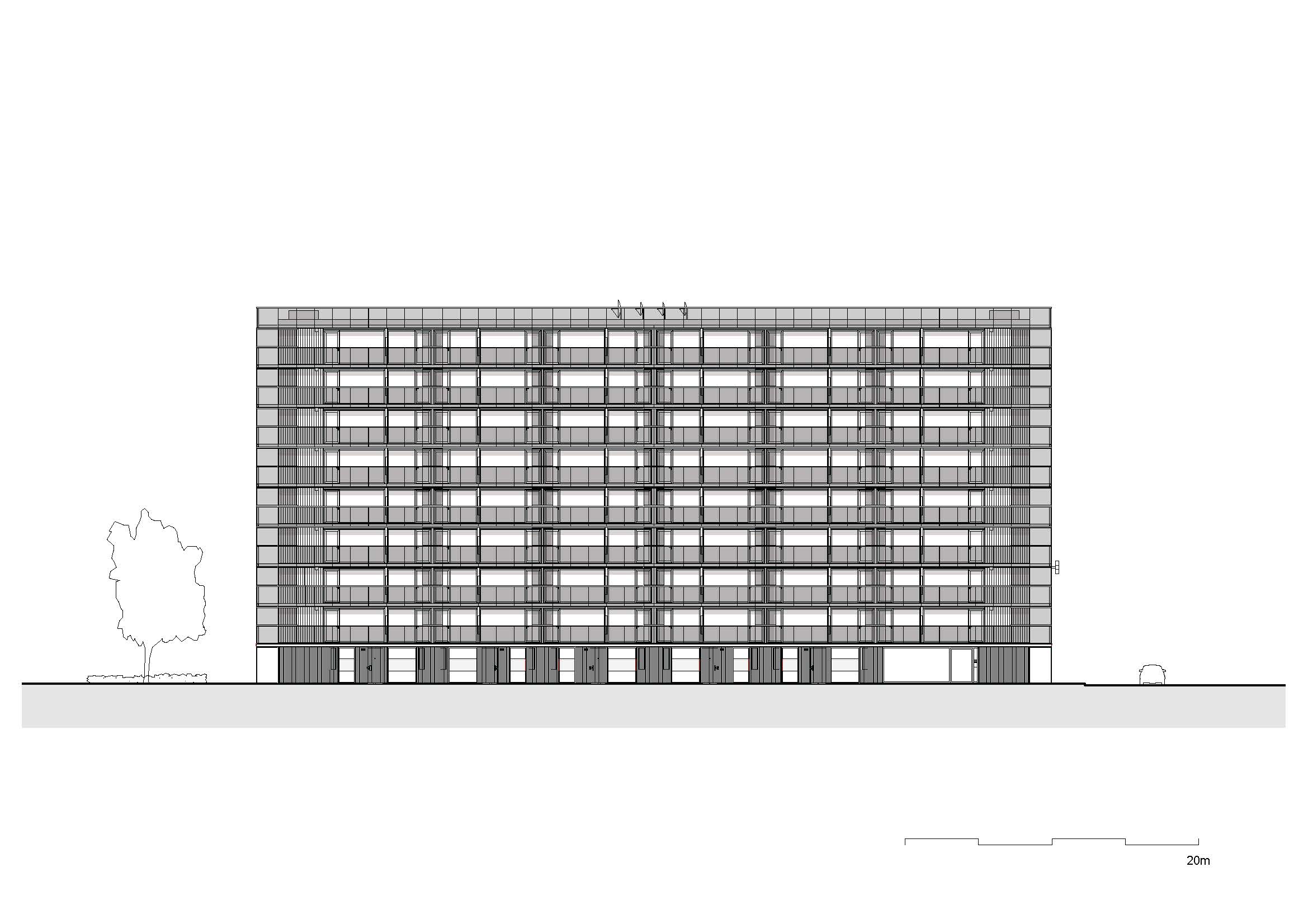 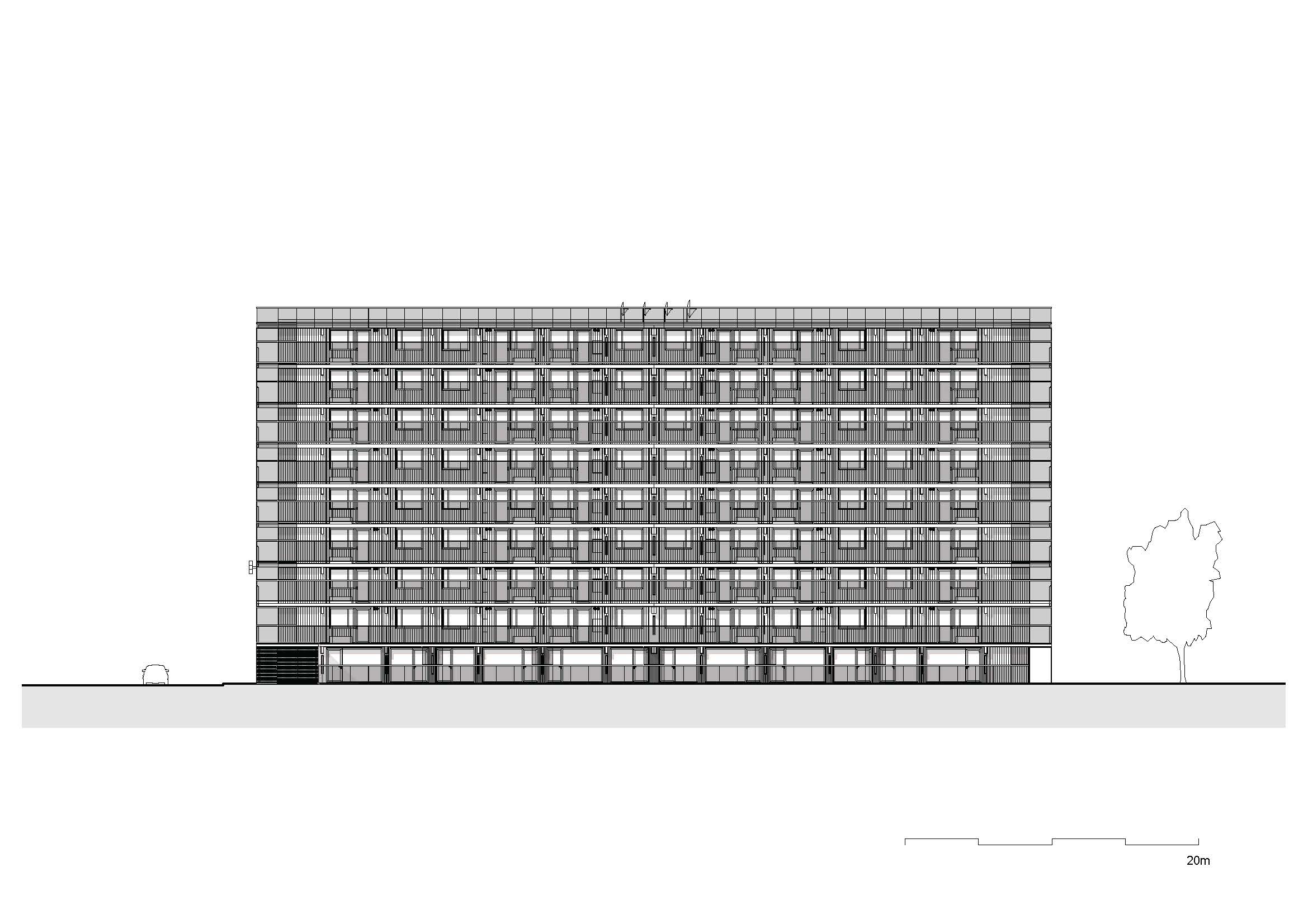 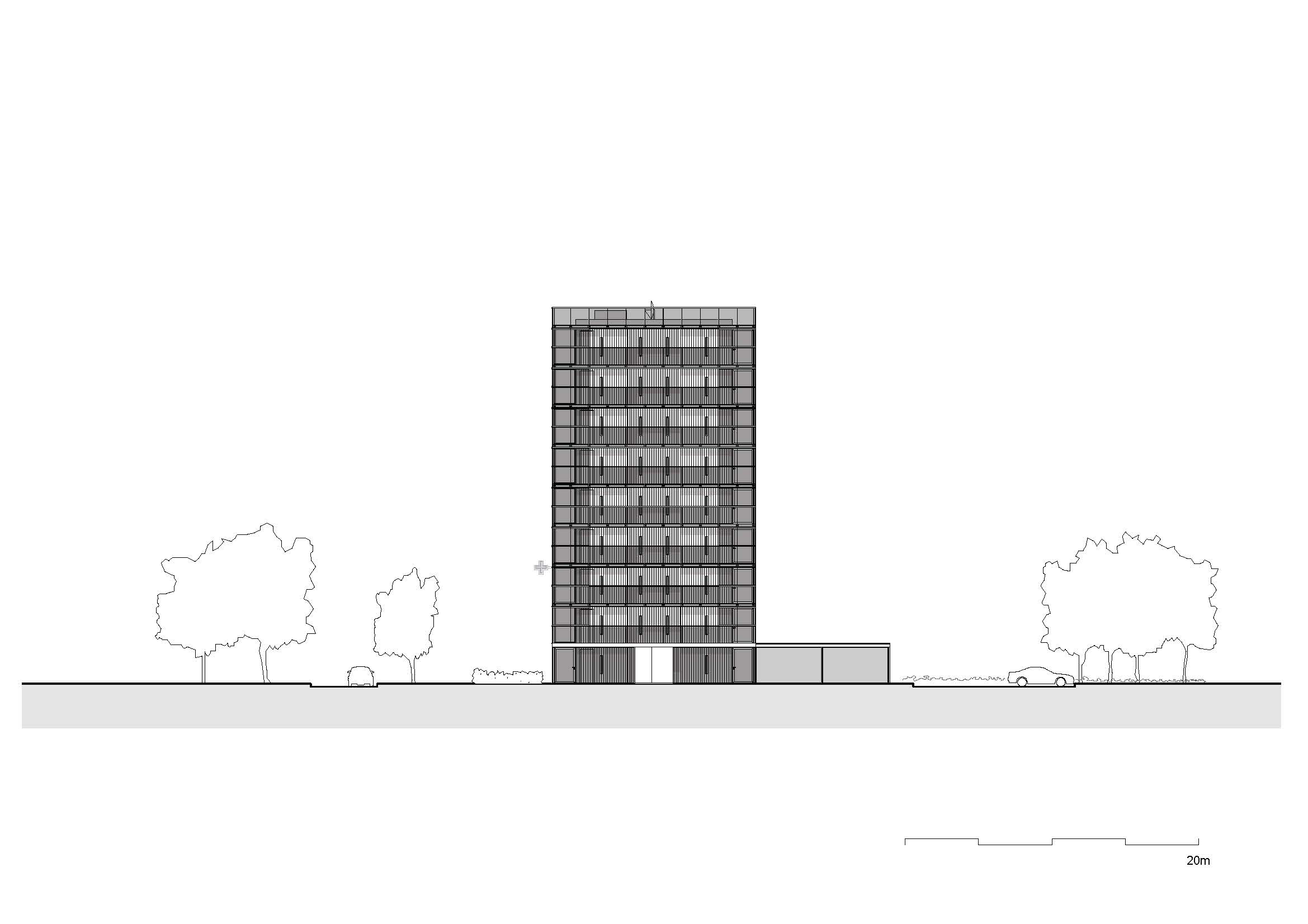 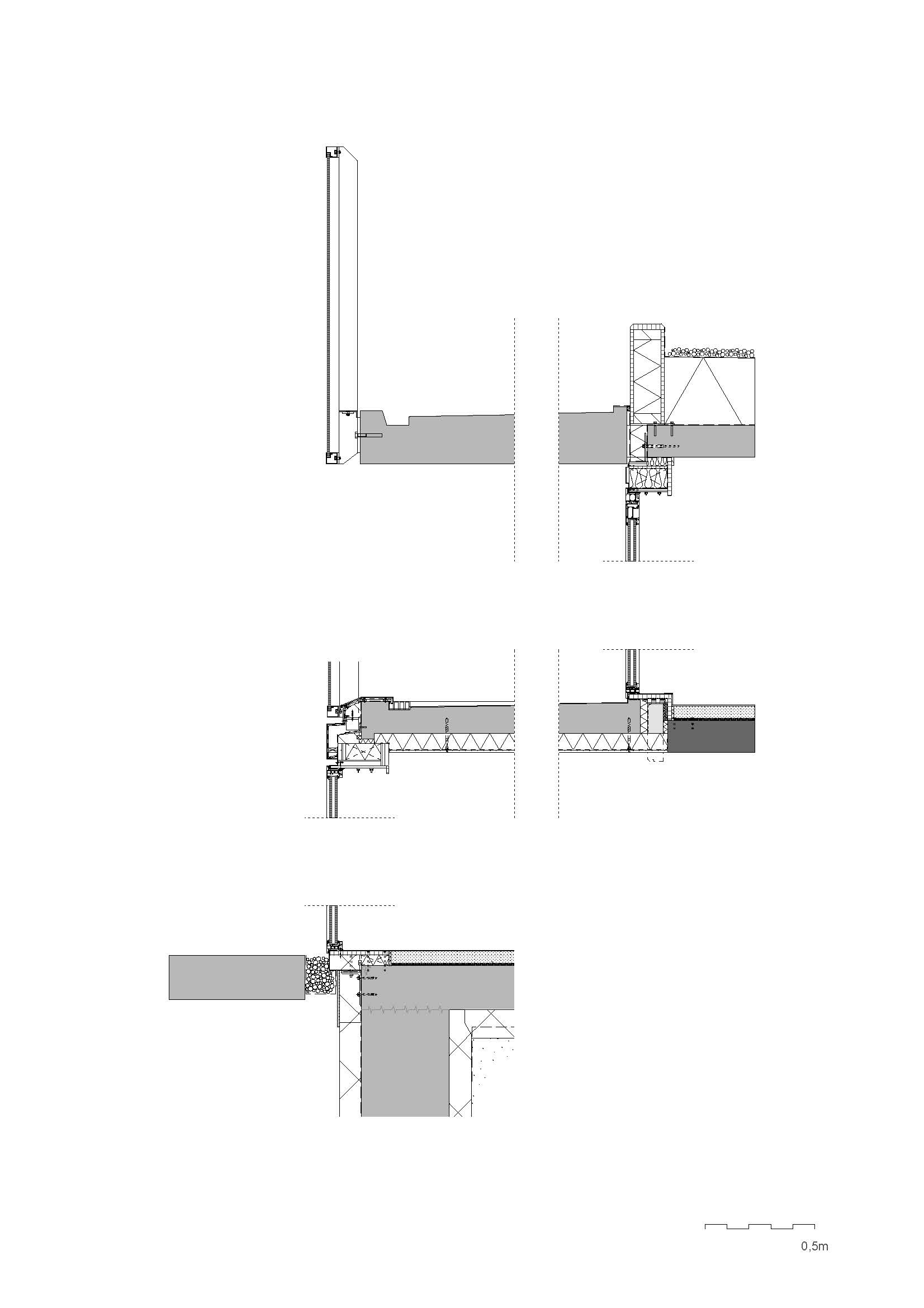 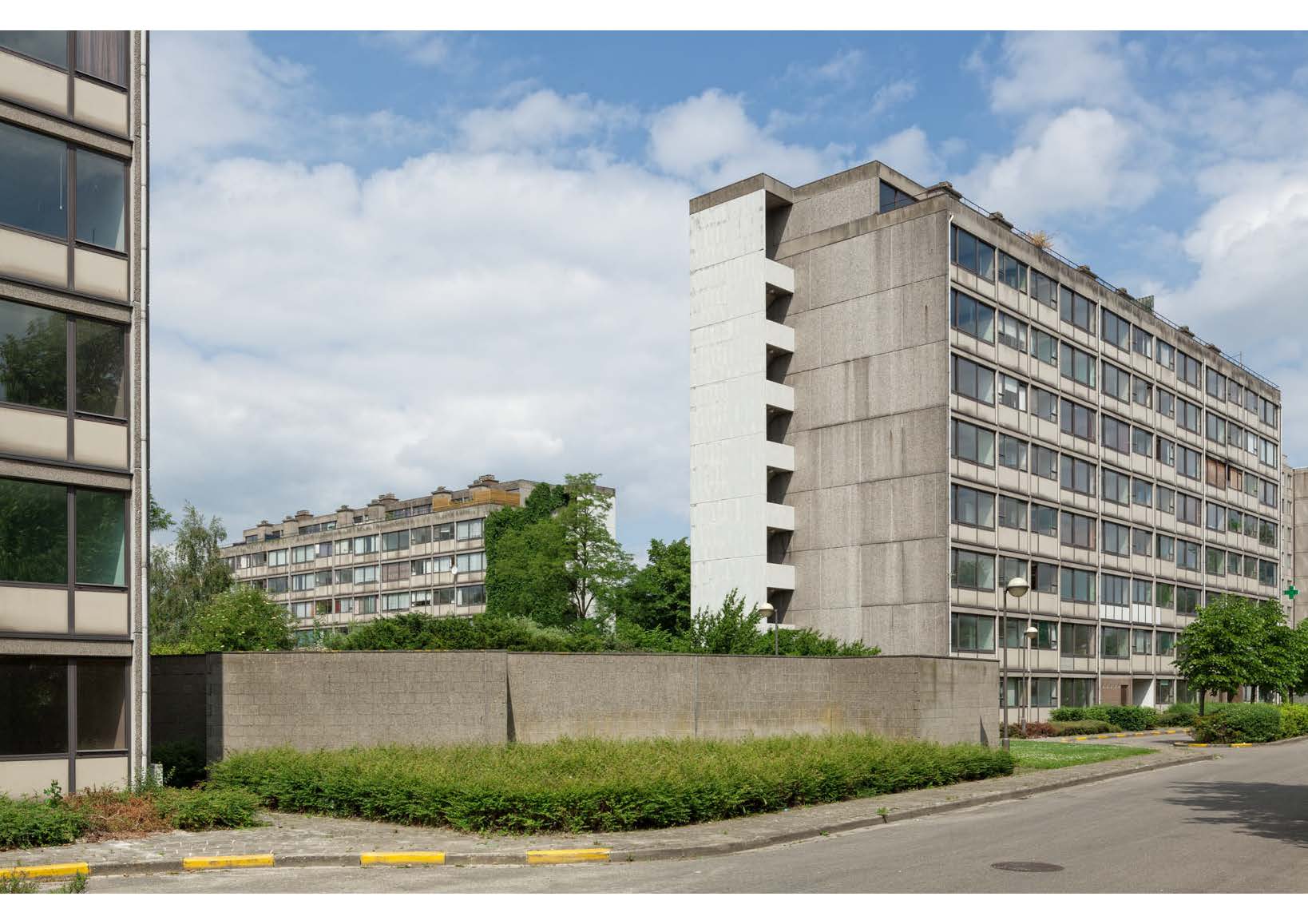 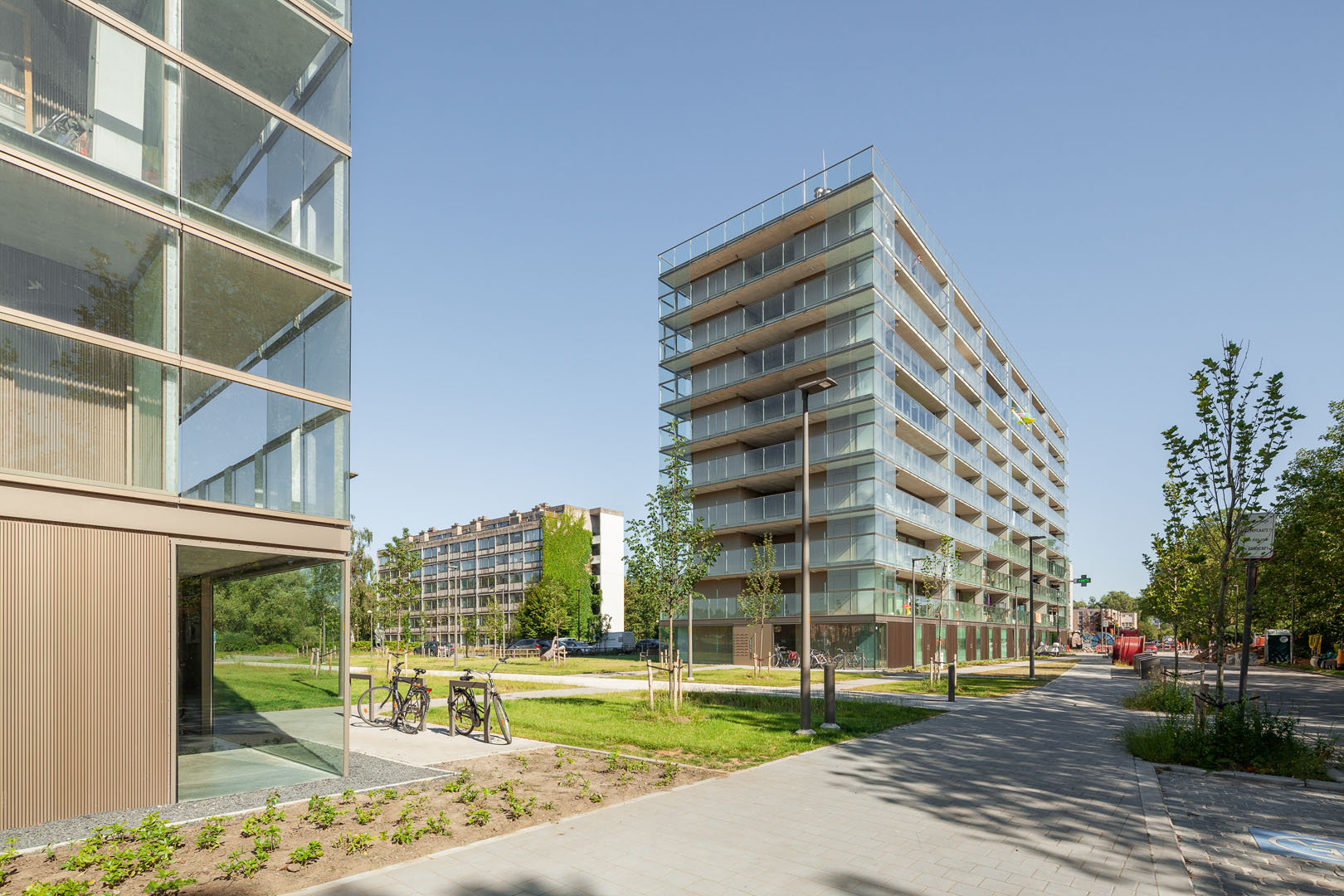 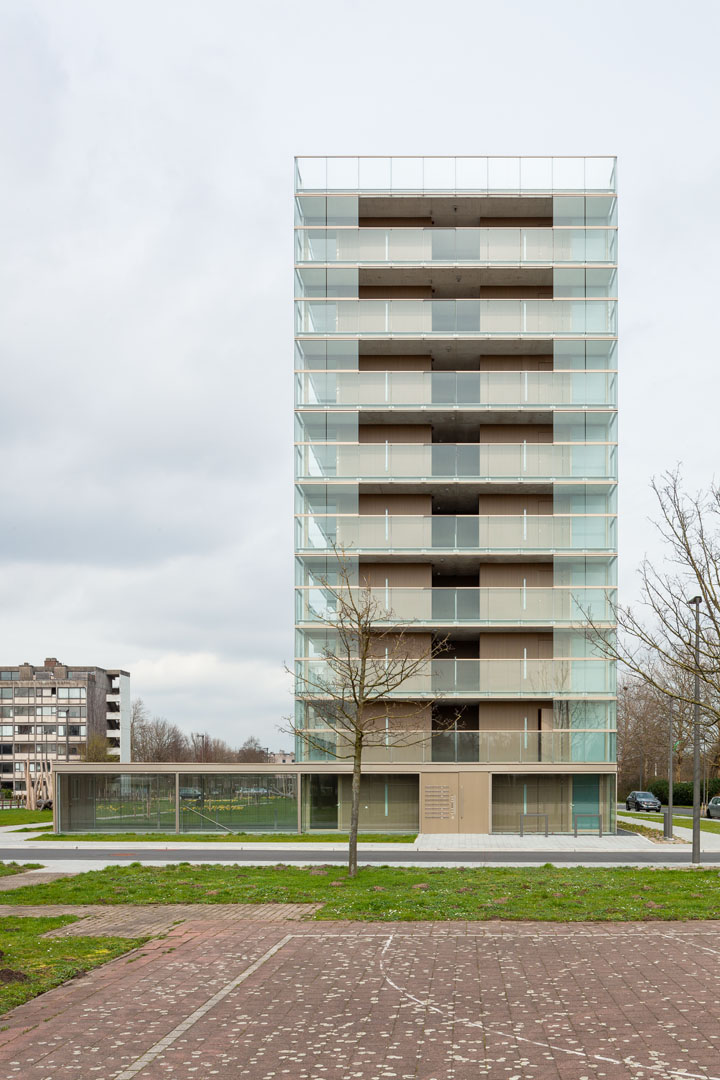 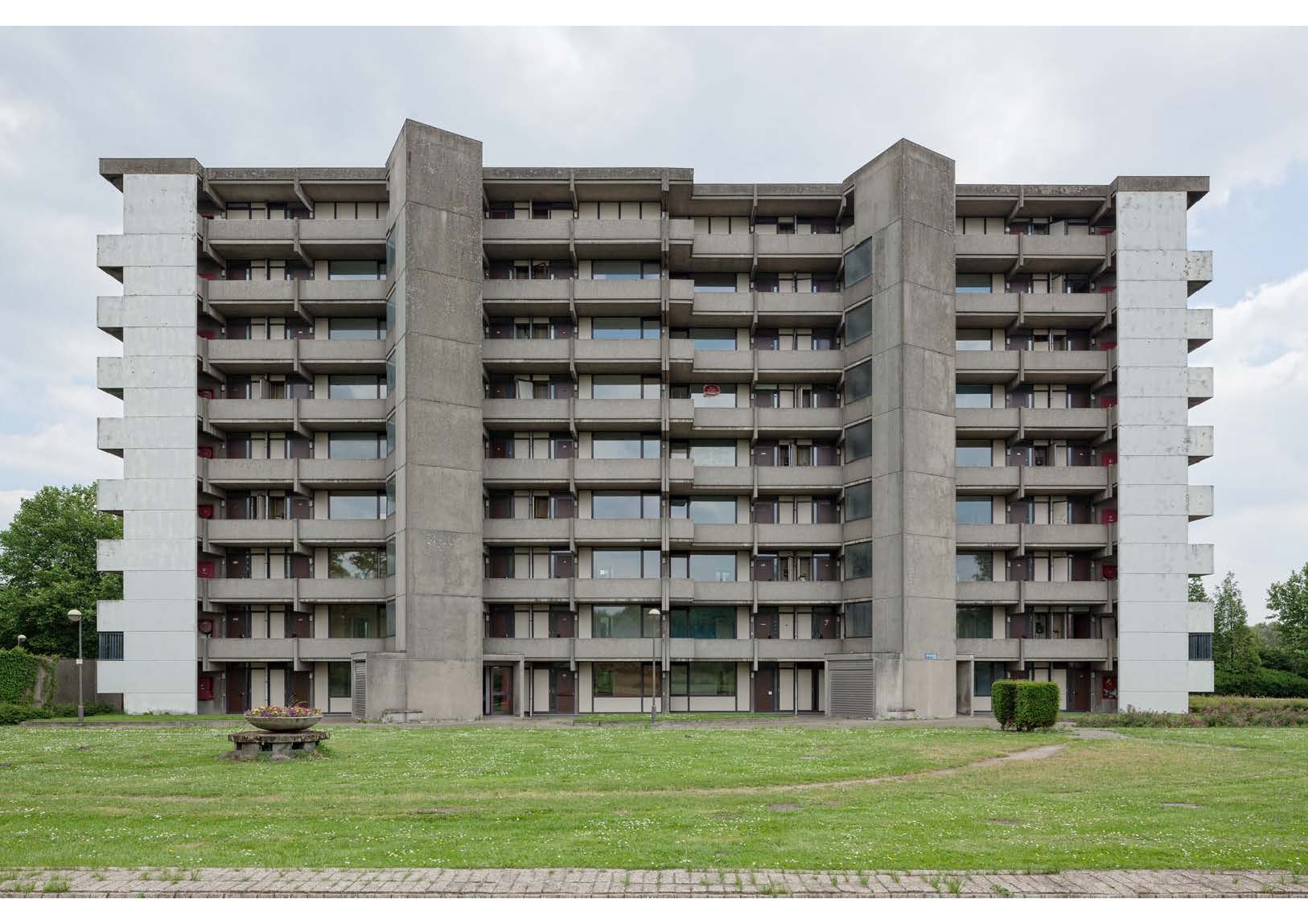 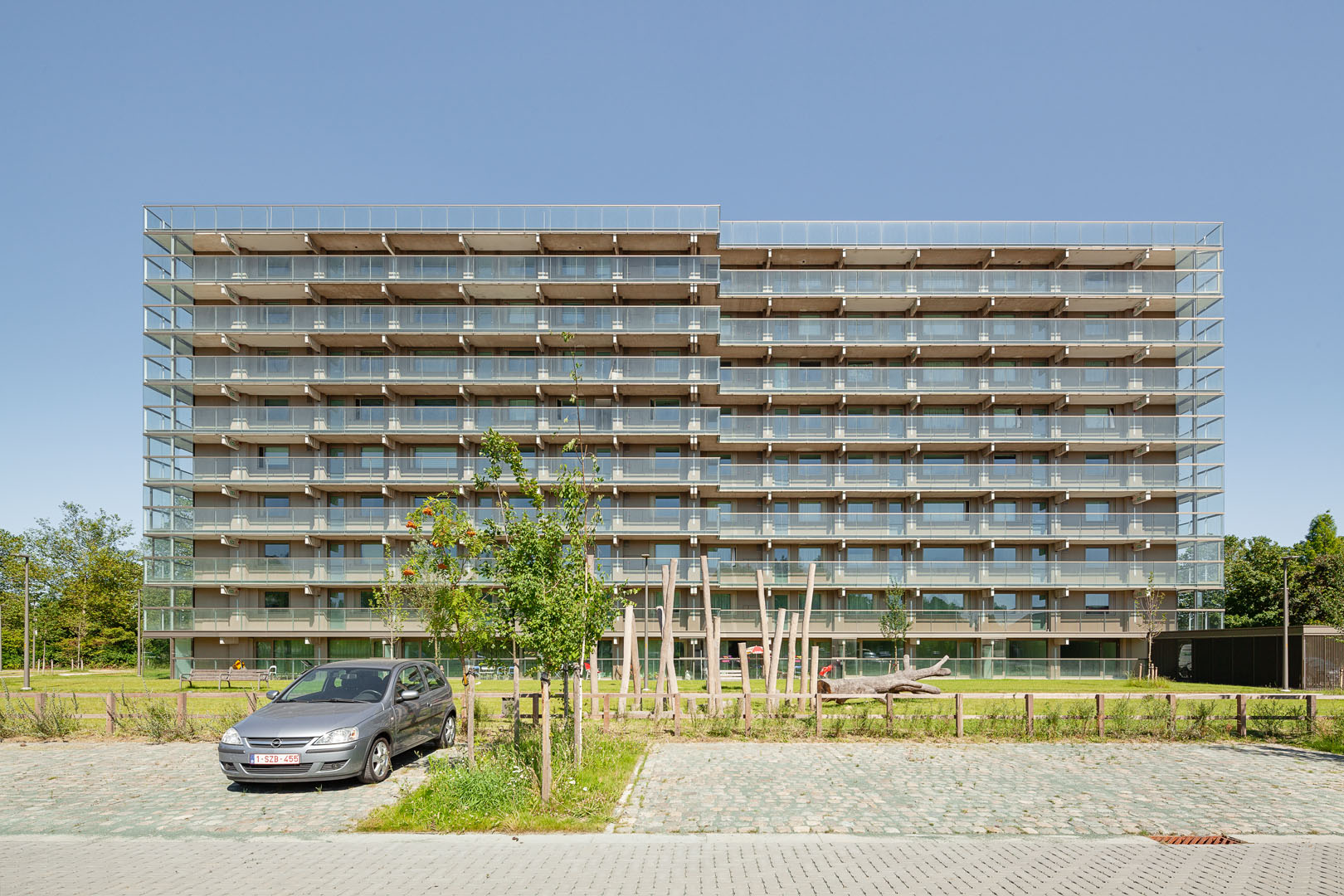 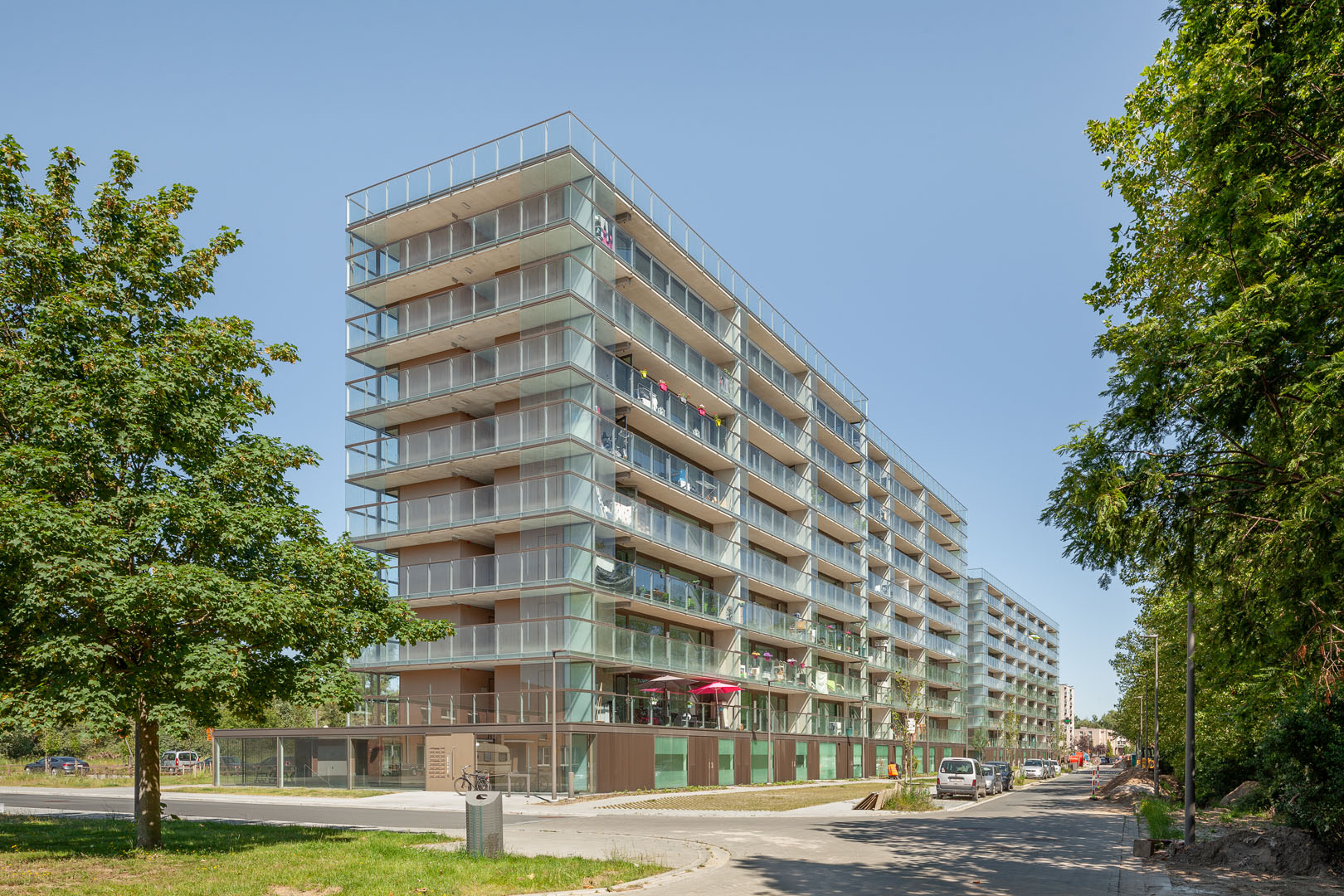 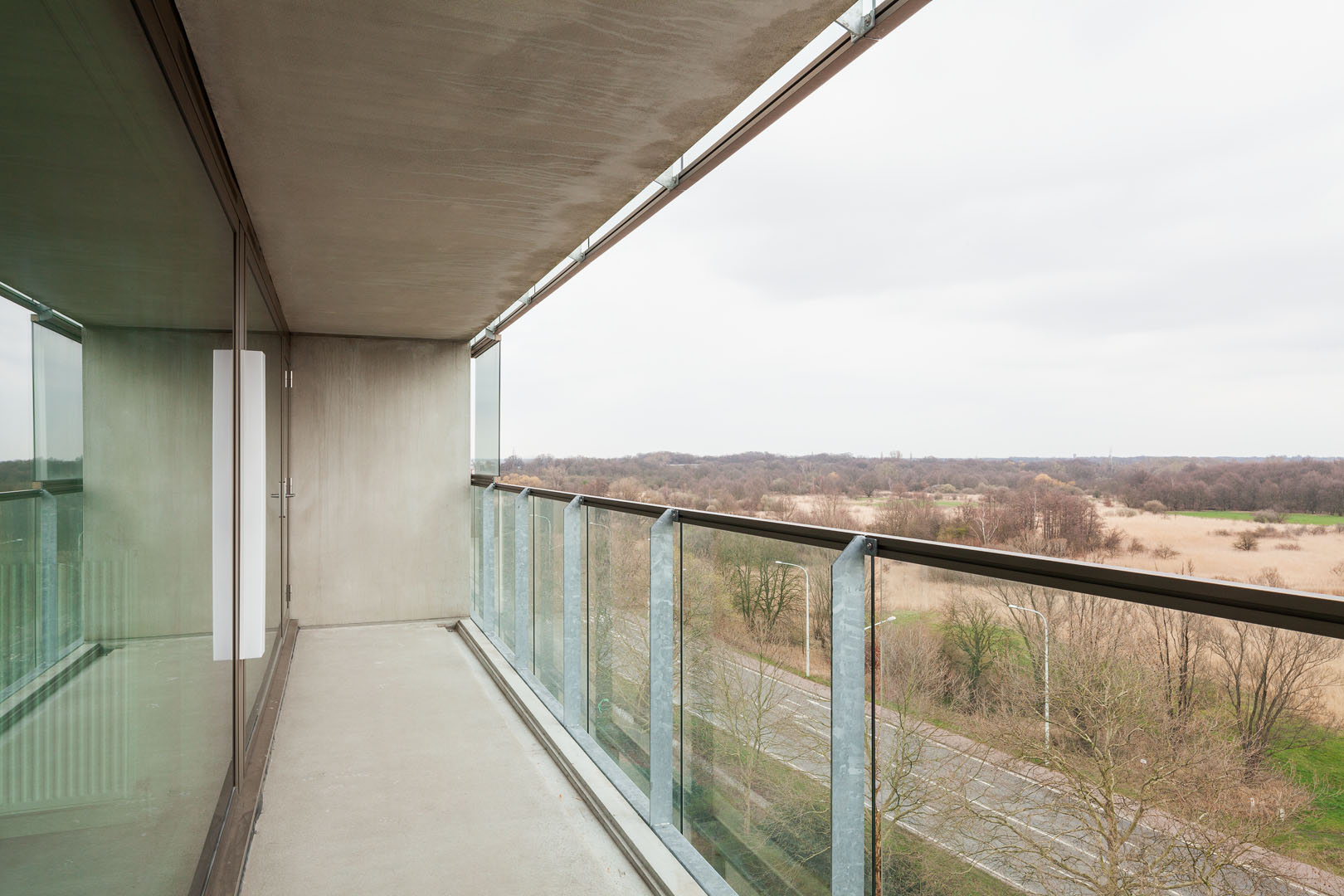 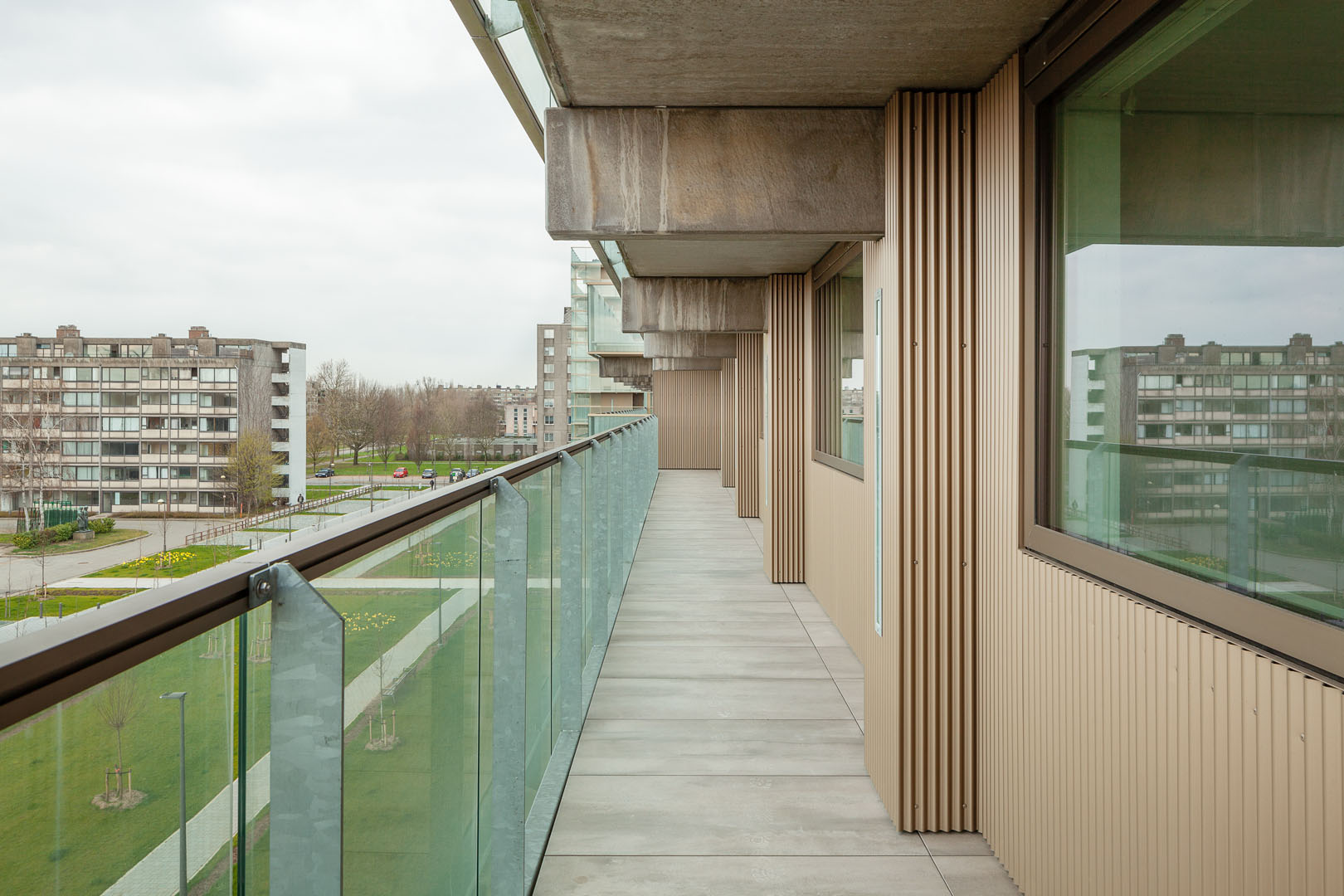 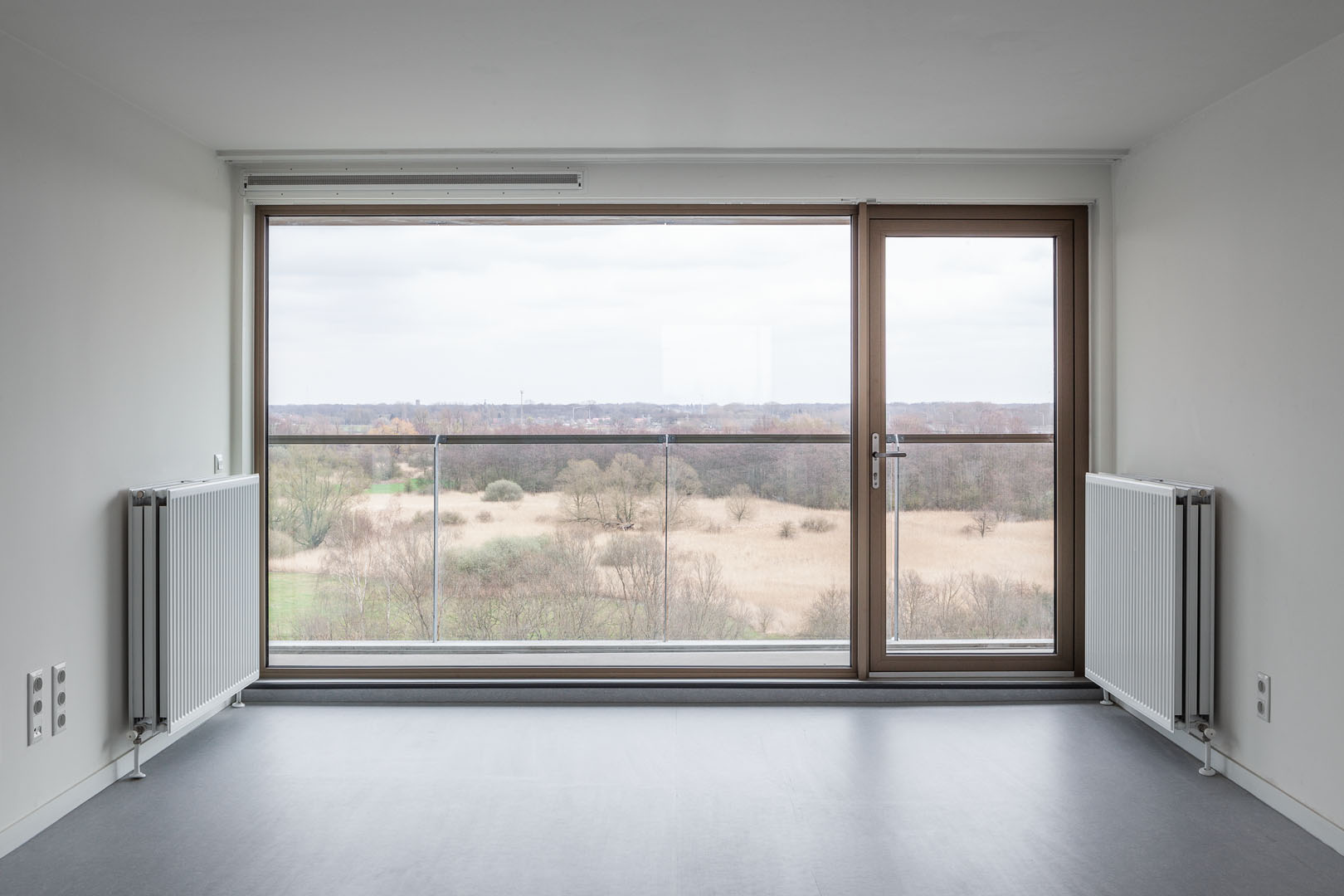 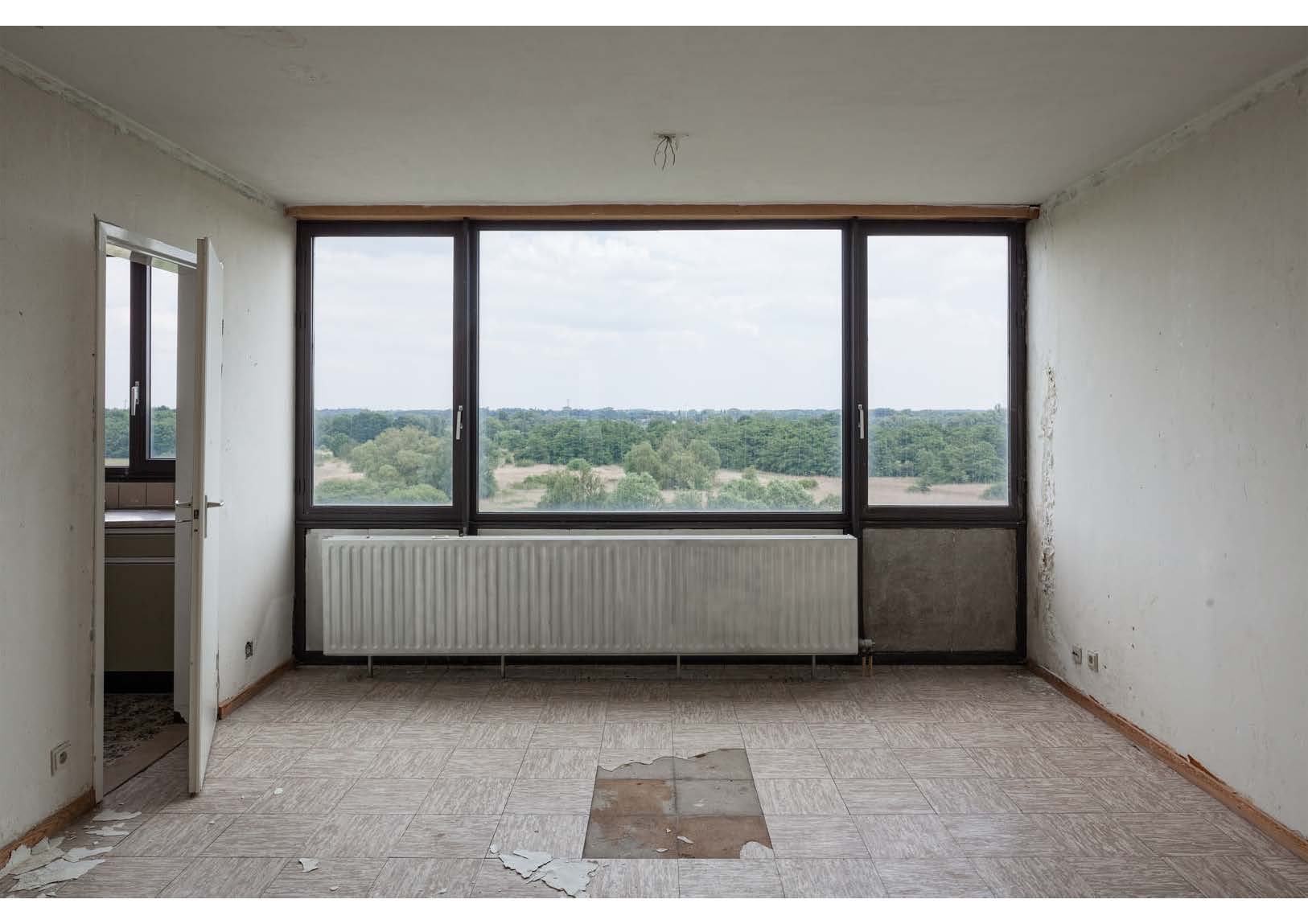 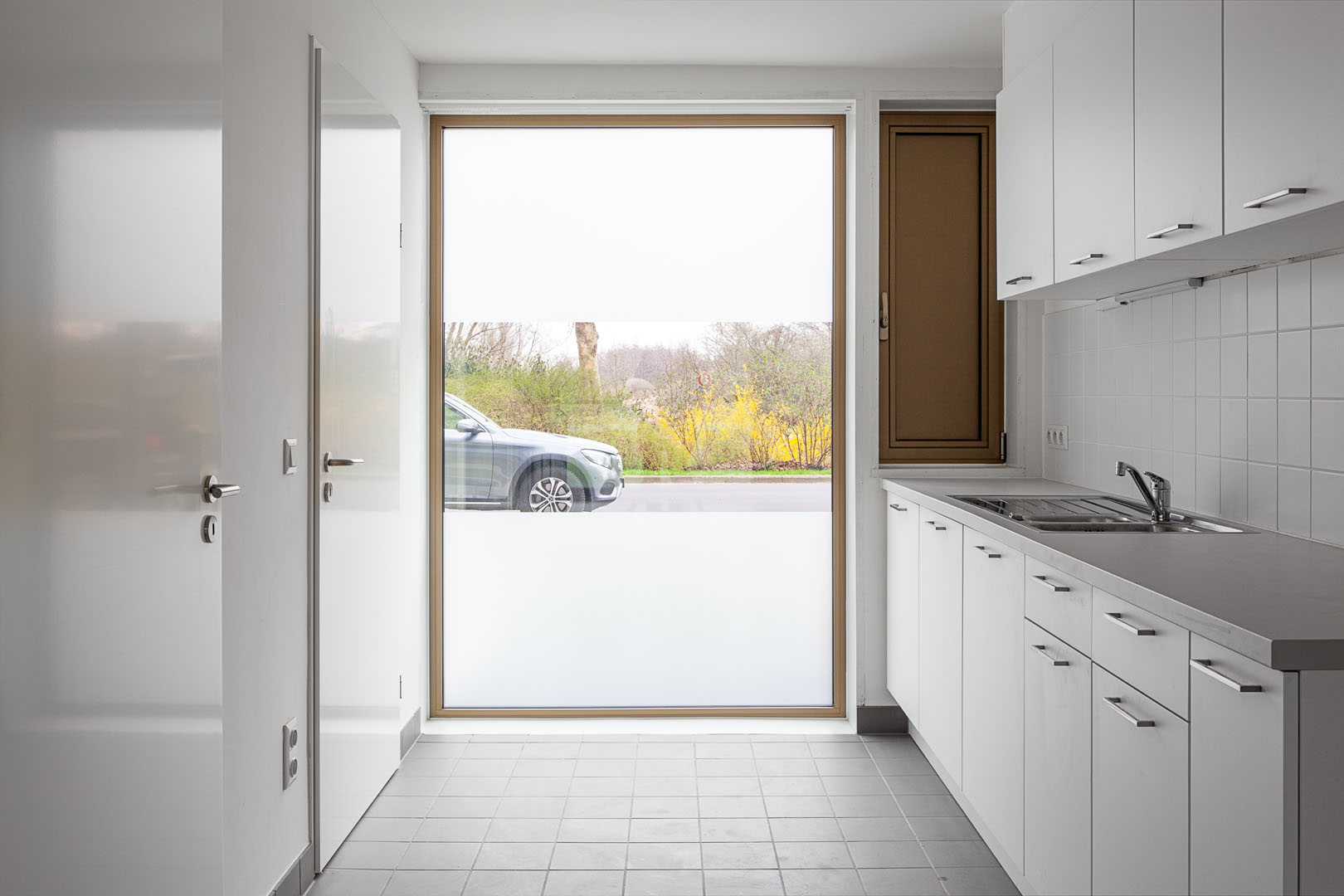 Of which
residential – Di cui Residenziale: % 98

Facilities for the public – Attrezzature pubbliche: % 0

Costs are app. 60% of the average costs in Belgium.
This was achieved by:
a) re-use existing building structure of the two 1970’s buildings
b) an access system with only two main staircase per building
c) a repetitive building system with the same grid-line dimensions, facade elements and interior components.

Community accompaniment in the life of the building – Accompagnamento della comunità nella vita dell’edificio:
NO

The Rozemaai housing estate in the far north of the city of Antwerp was built on a rather isolated urban plot as an extension of the suburban village of Ekeren. The site faces the impressive landscape park “Oude landen” on one side, while on the other side the plot is enclosed by the noisy motorway A12 and the nearby harbour with its large industrial estates. The urban plan was based on CIAM principles and proposed the construction of a series of mainly gallery-accessed slab buildings for social housing that rise up to eight floors in an open park-like setting. The impressive buildings with prefab-concrete façades designed in a brutalist manner encountered various social problems from the beginning that have been – among others – the result of a rather problematic architectural design with limited interaction between the houses, the street and public space. Apart from that, the houses suffered from various technical problems that were the result of poor construction in combination with postponed maintenance. After a long discussion, the housing cooperation finally decided to renovate at least two of the almost ruined buildings.

To be able to tackle the various urban, architectural, social and technical problems, Atelier Kempe Thill decided to transform the two buildings in quite a radical way. The starting point was the ambition to improve the integration of the two buildings into the urban framework and to realize a more convincing interaction between the houses and the public space. To ensure this, the building site was cleaned up in three steps. The first step was to remove an existing abandoned 150m long parking garage and several garage boxes that – besides causing social problems like drug dealing – blocked the fluent relationship between the buildings and the surrounding park landscape. As a second step, all existing staircases and lift shafts of the two buildings were demolished to allow organising the access zone of the two flat buildings in a more appropriate way. The final step included removing the concrete balustrades of the galleries and nearly all façades to create a fluent relation between interior and surrounding landscape. At the end of this operation, only the stripped structural skeleton of the two houses remained on-site, forming a good basis for two “almost-like-new” buildings with an unexpected high quality for social housing in Flanders.