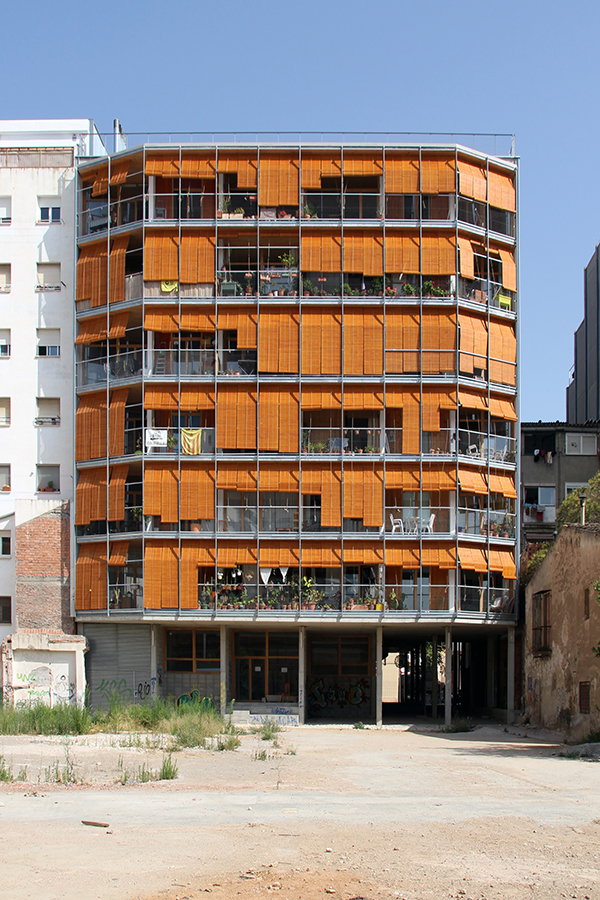 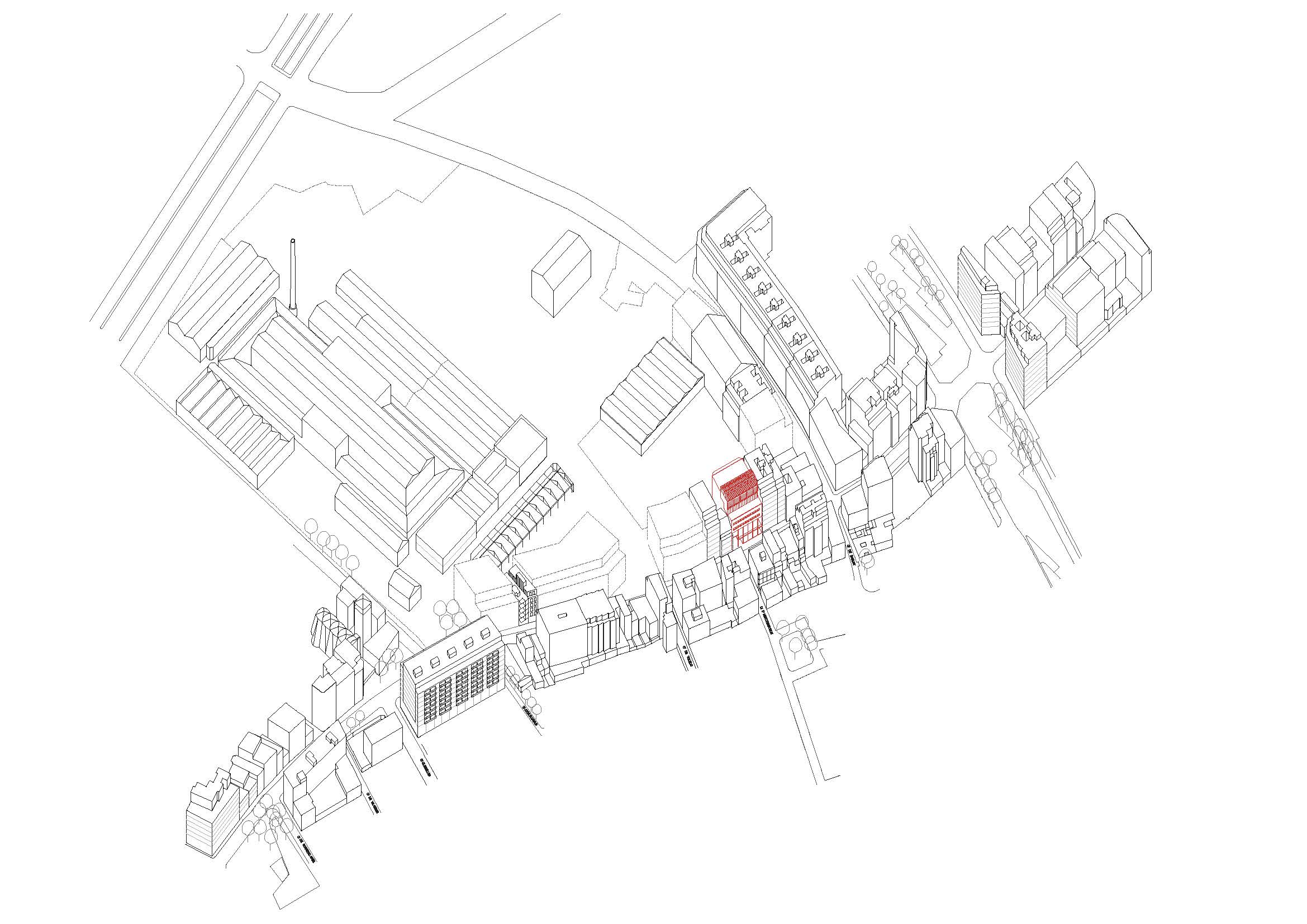 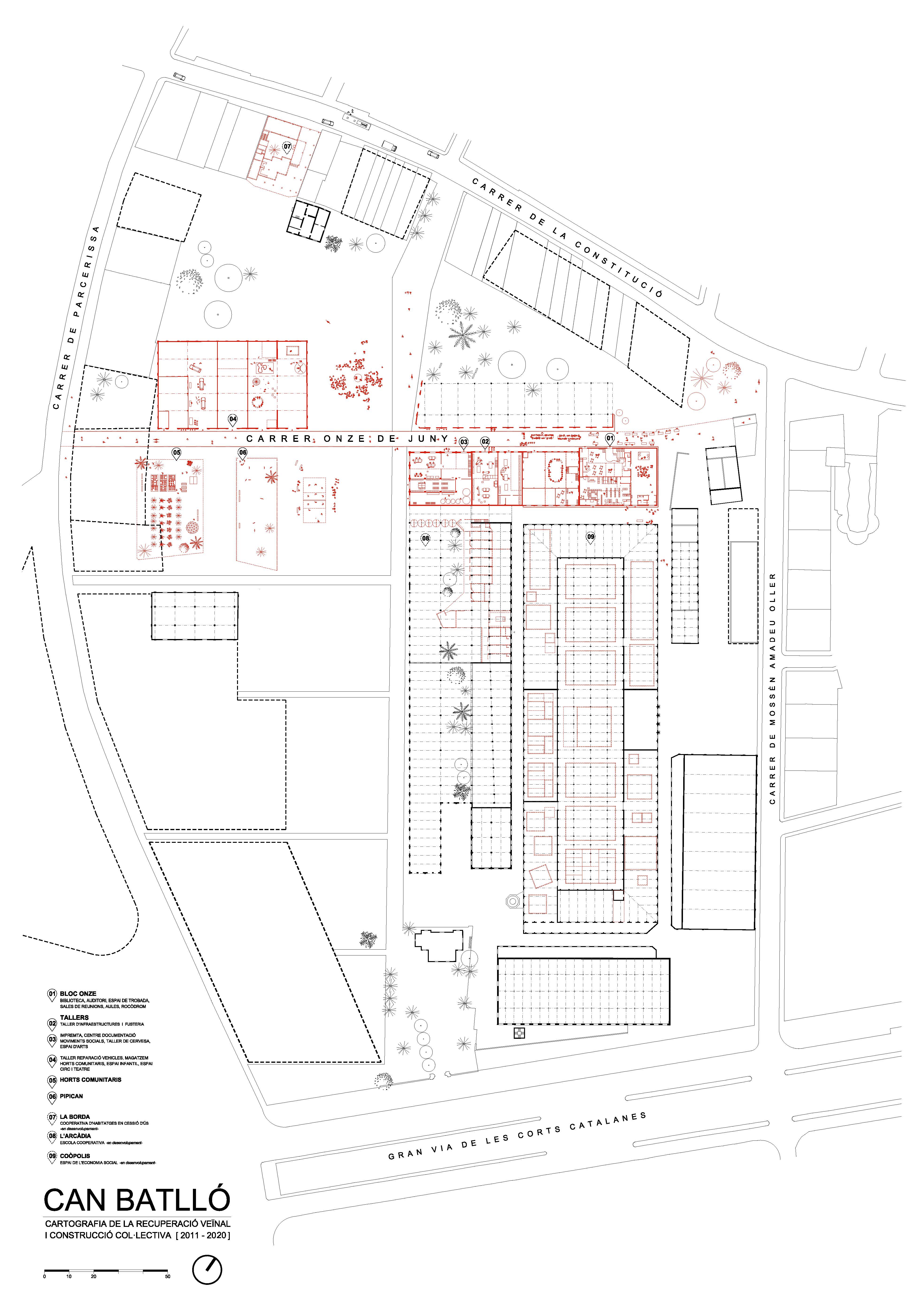 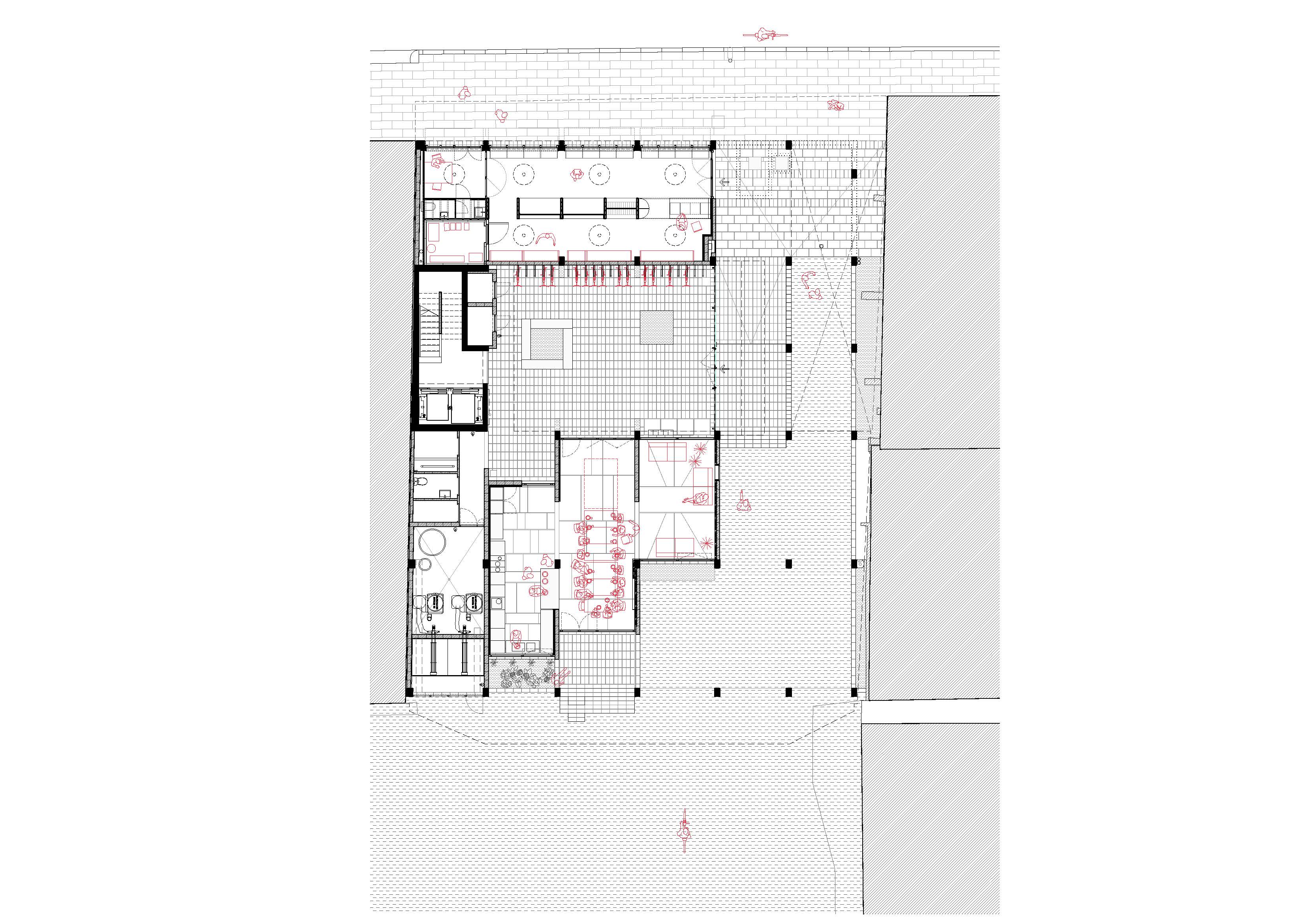 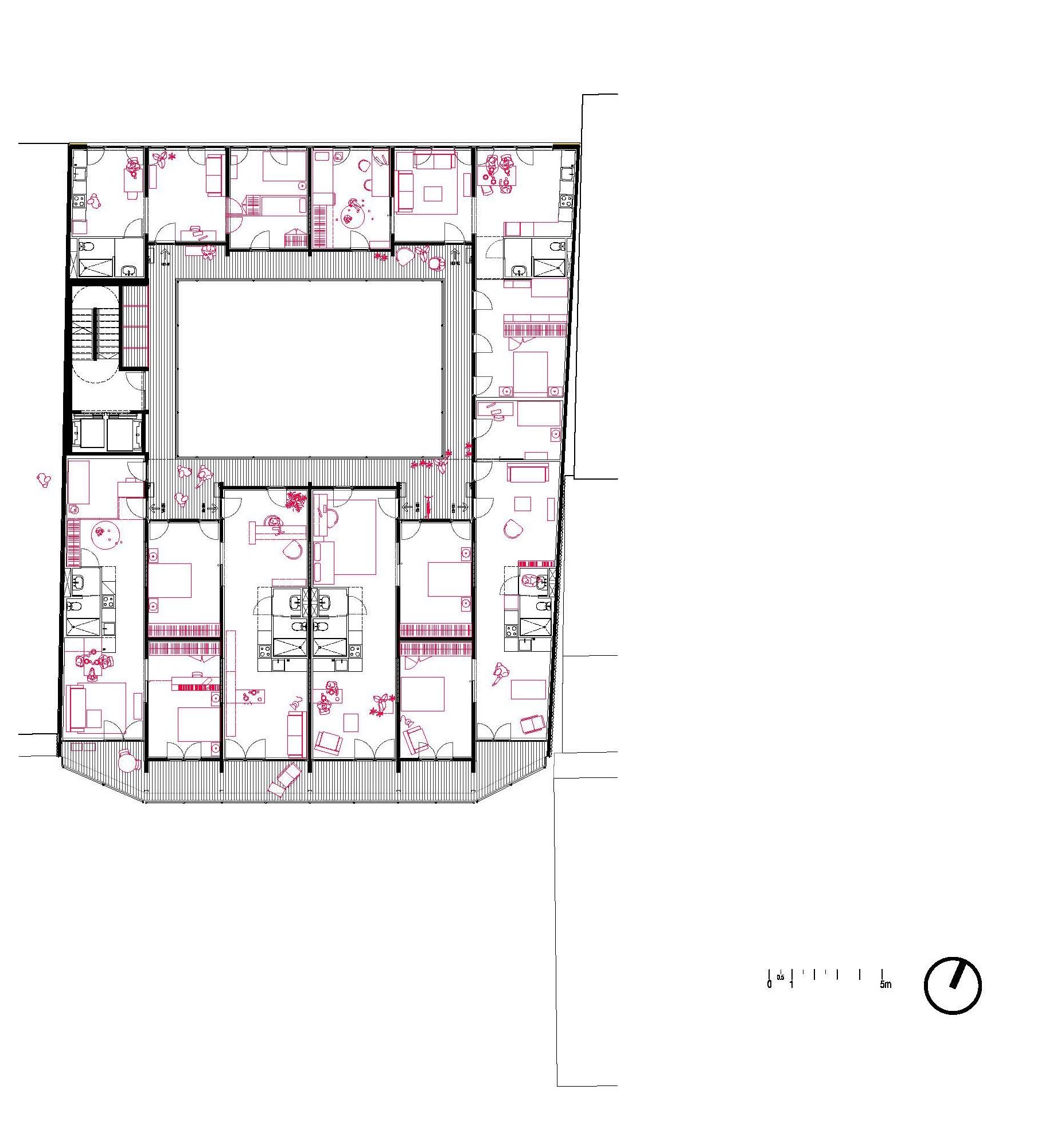 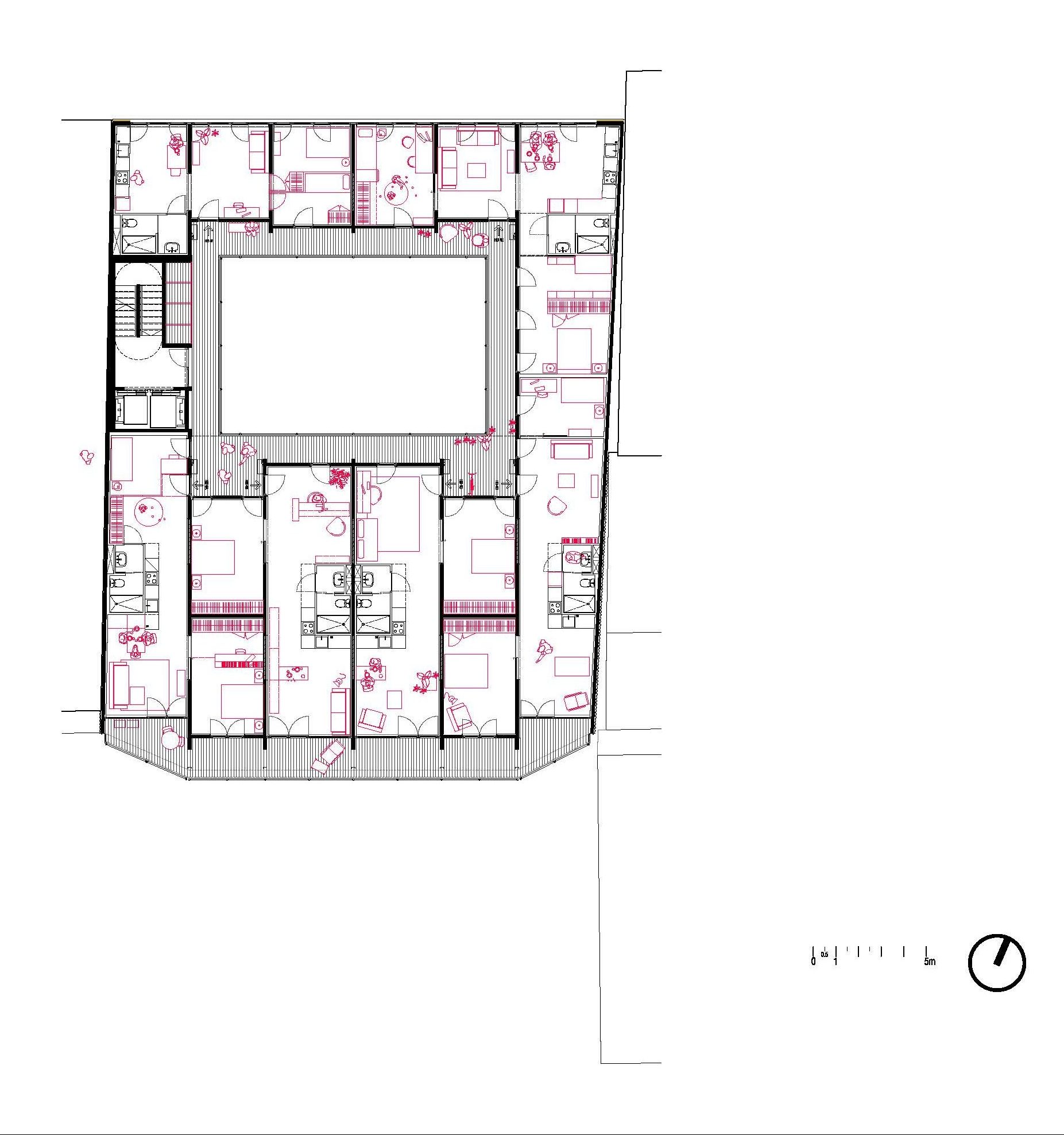 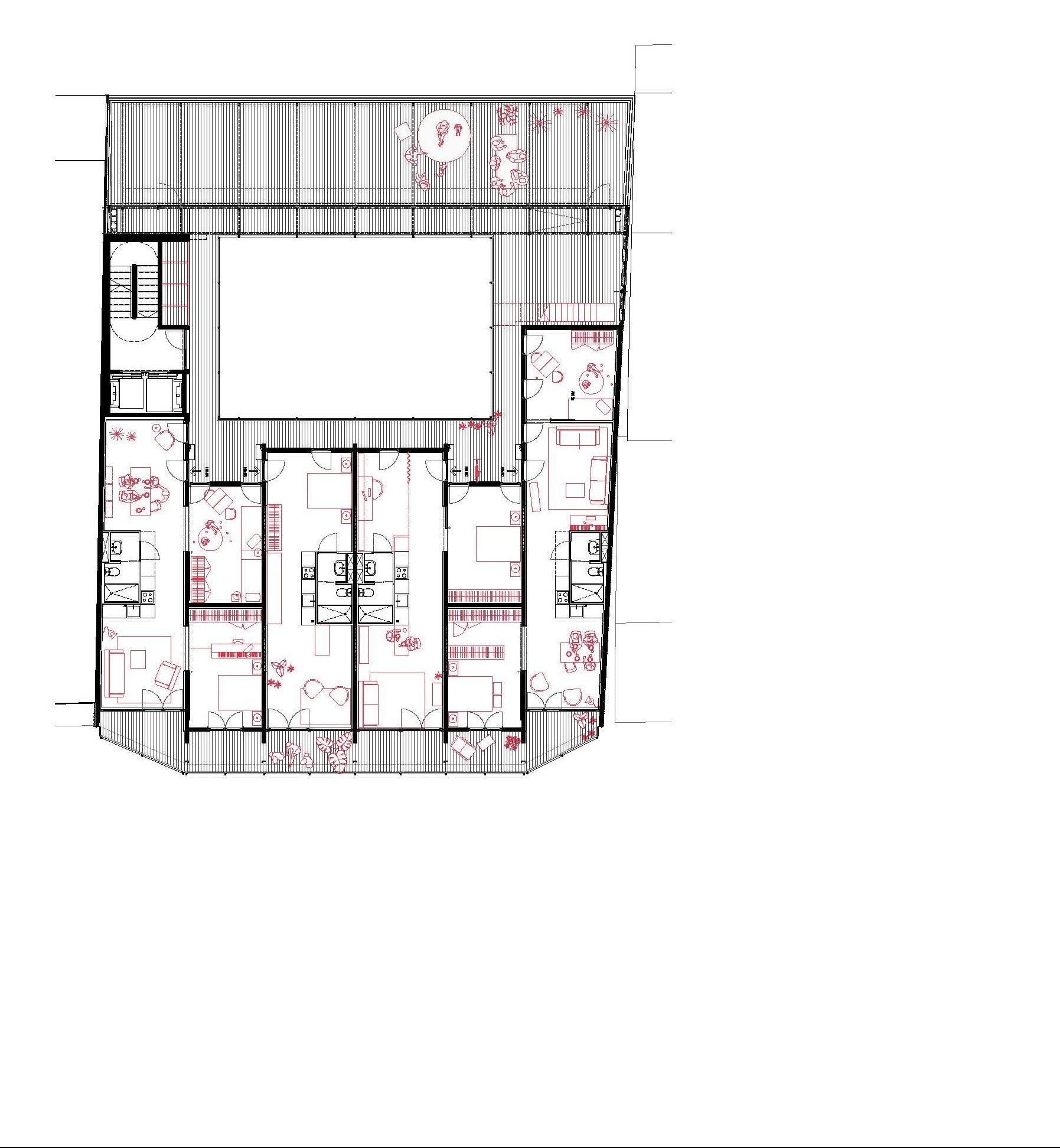 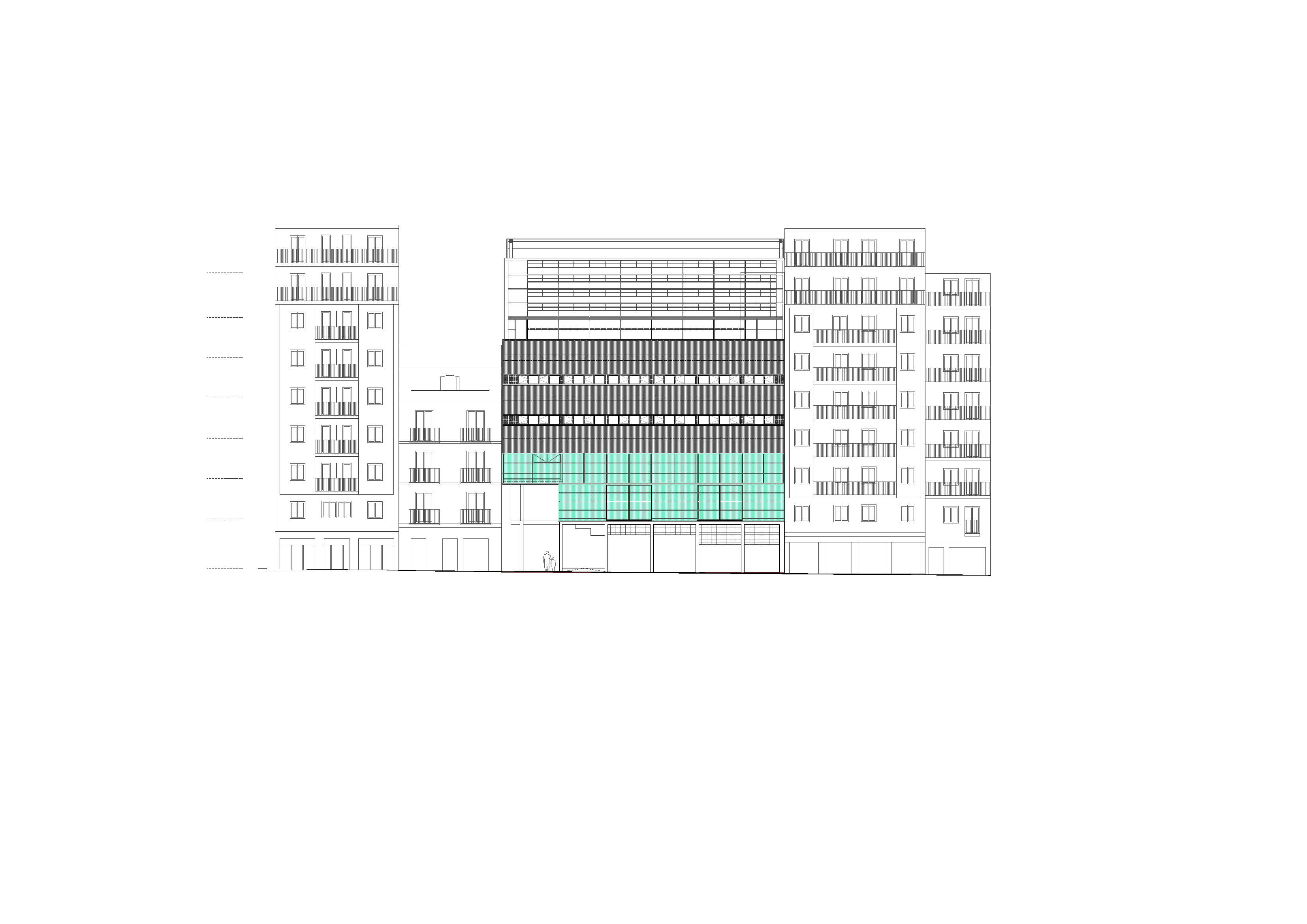 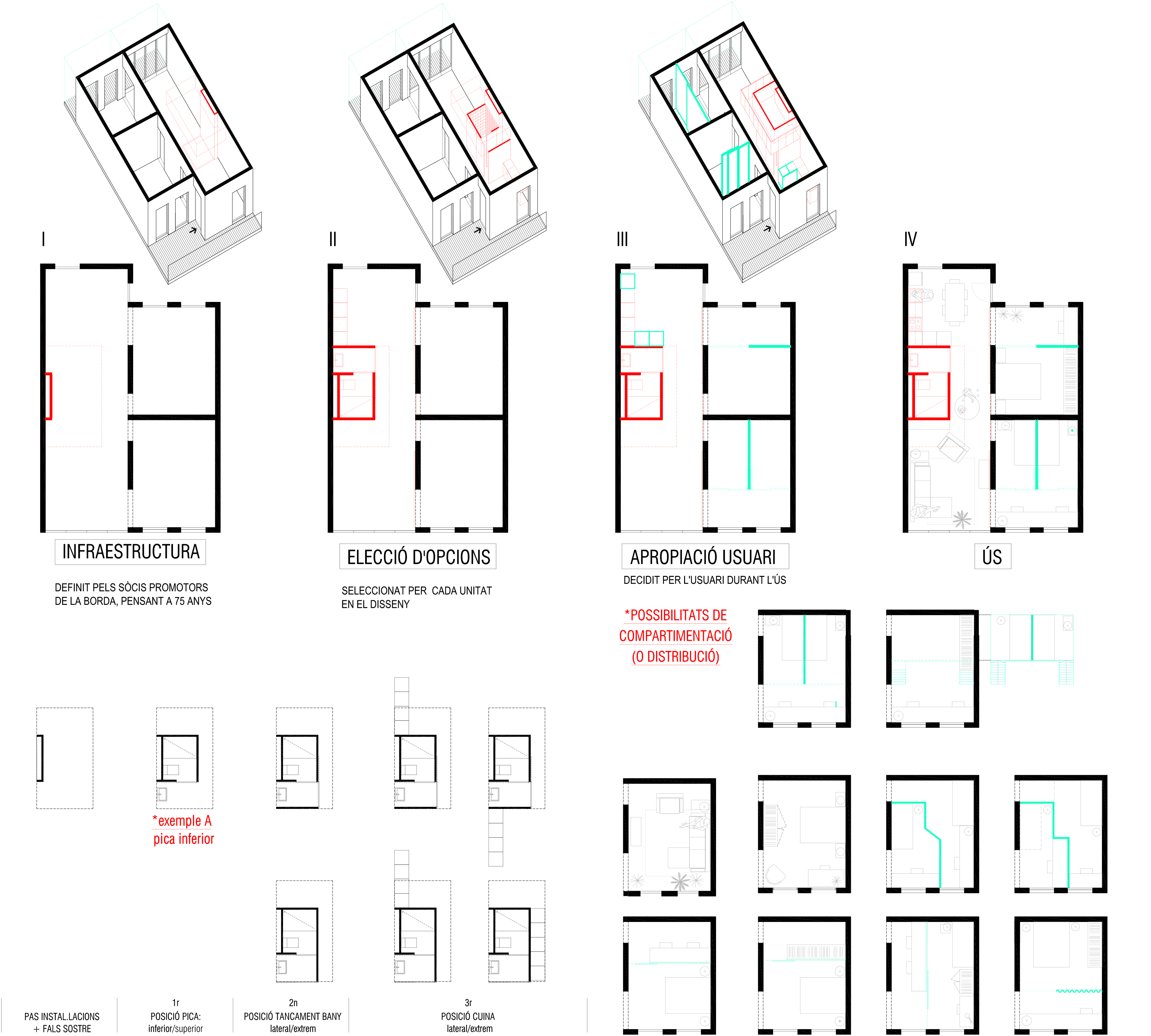 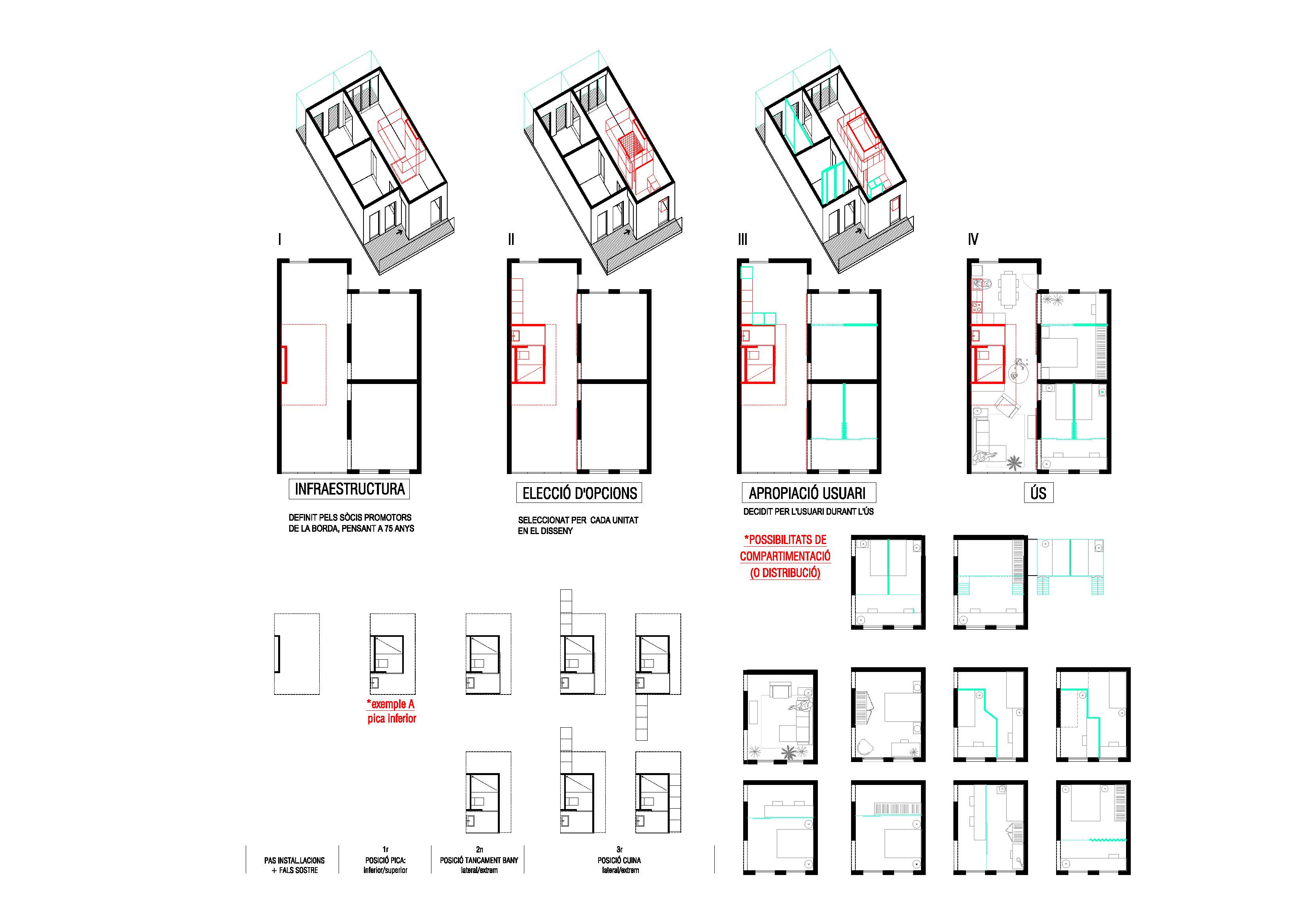 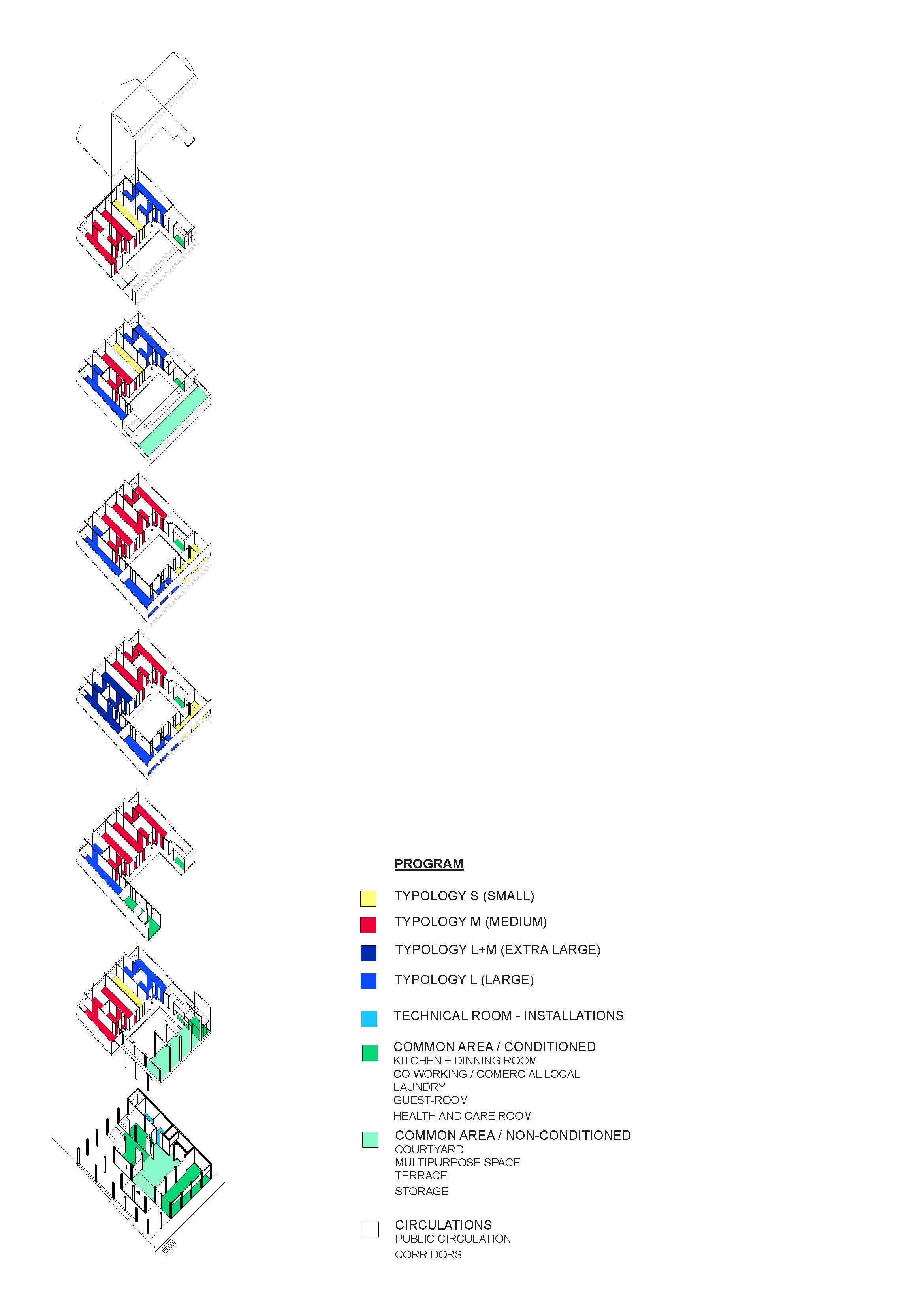 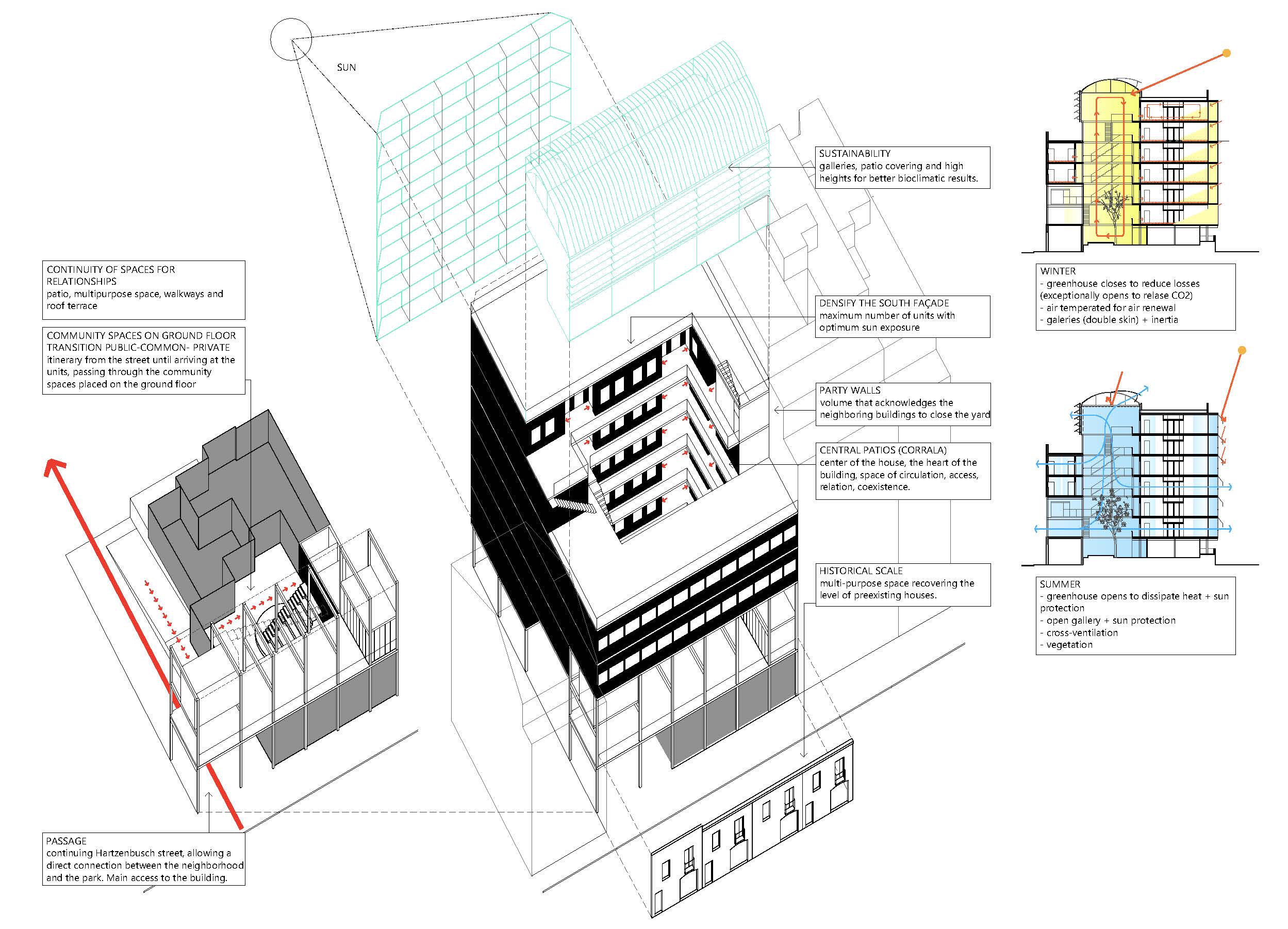 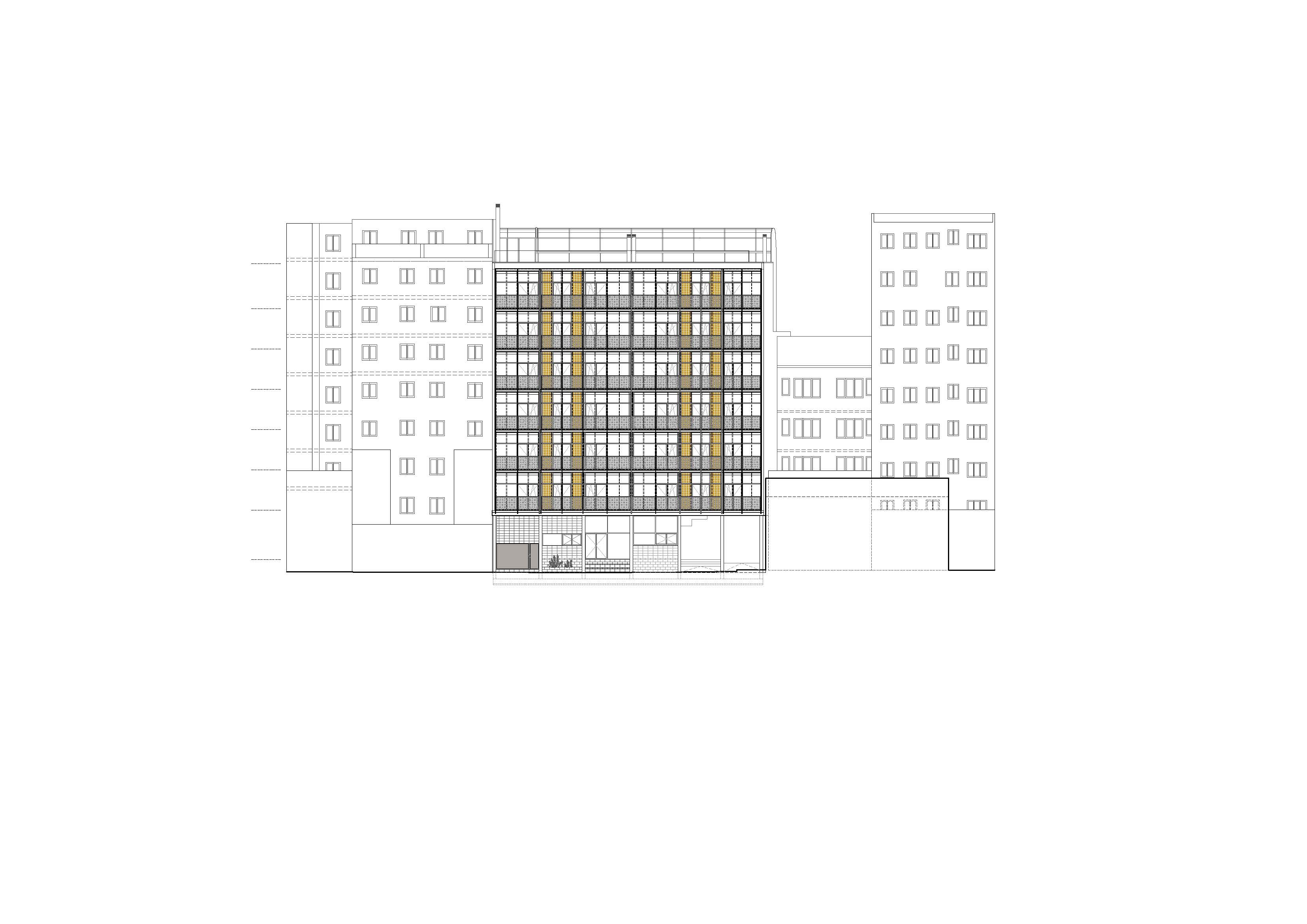 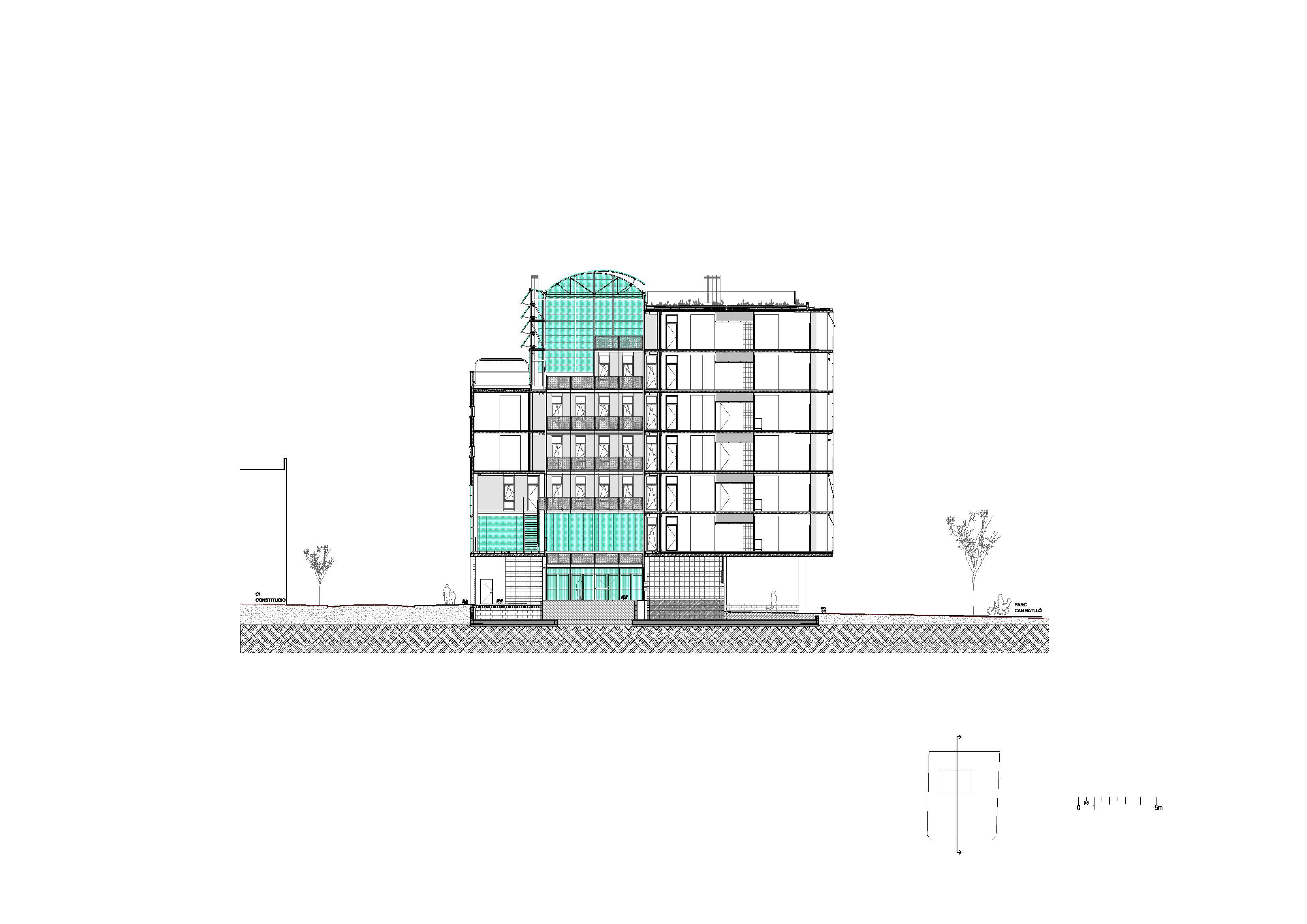 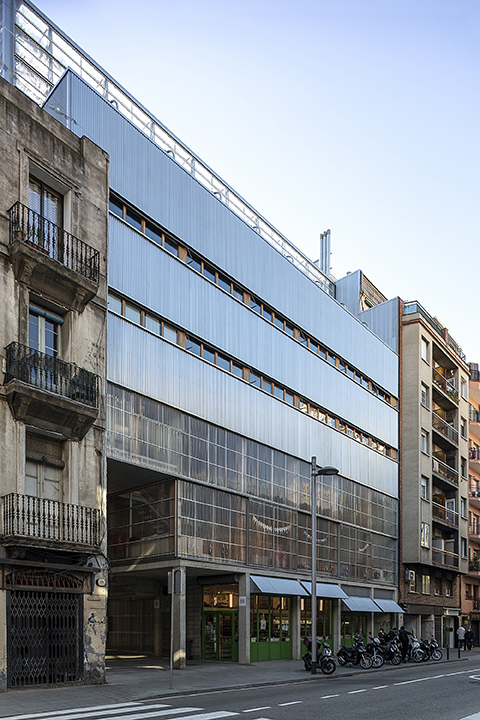 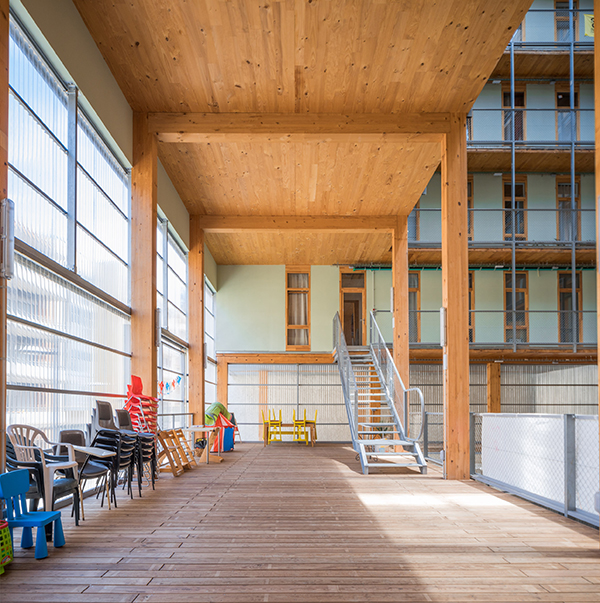 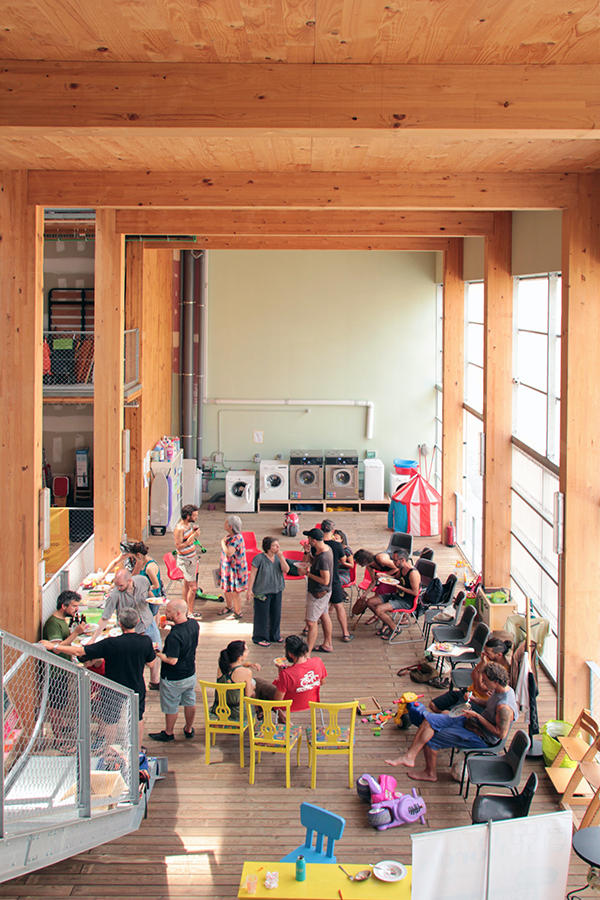 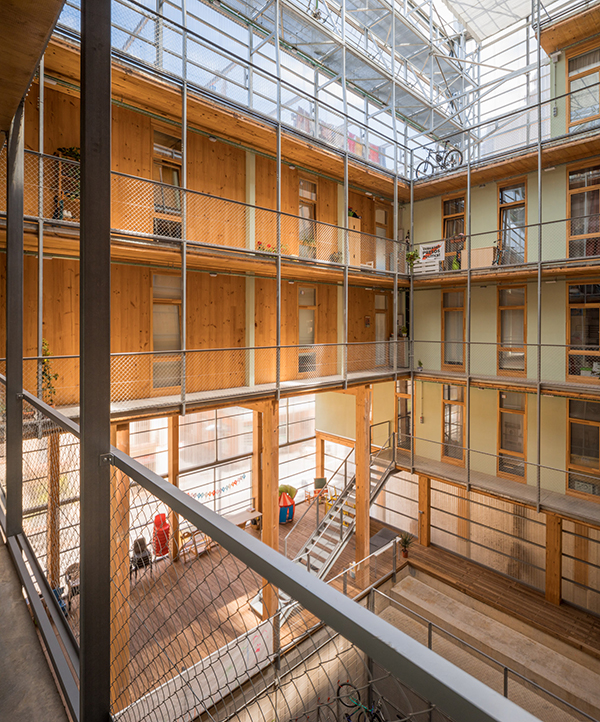 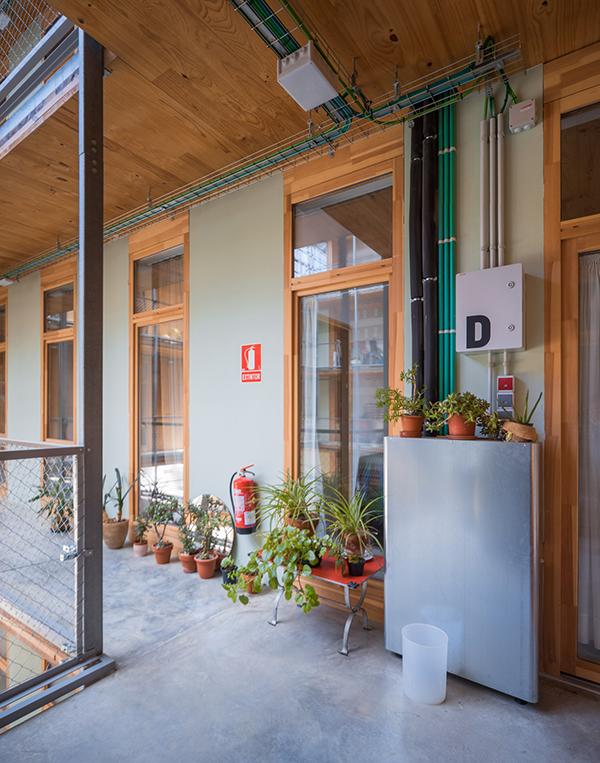 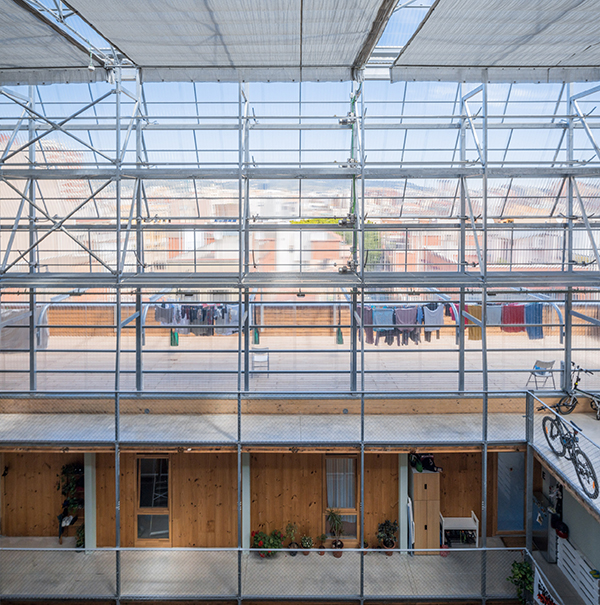 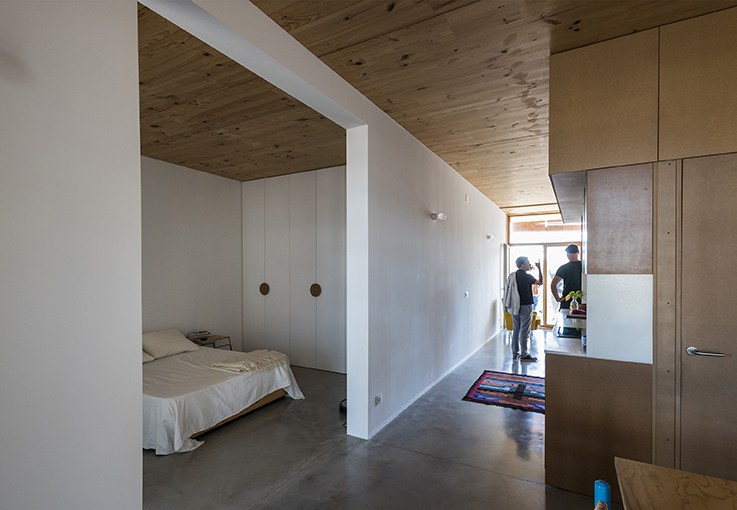 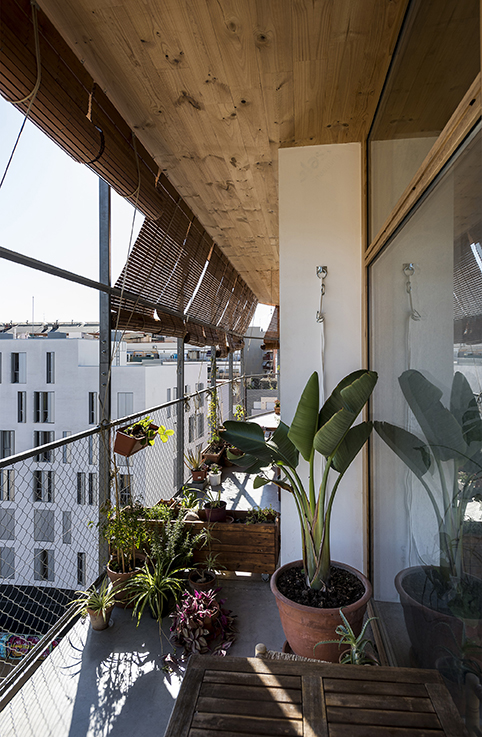 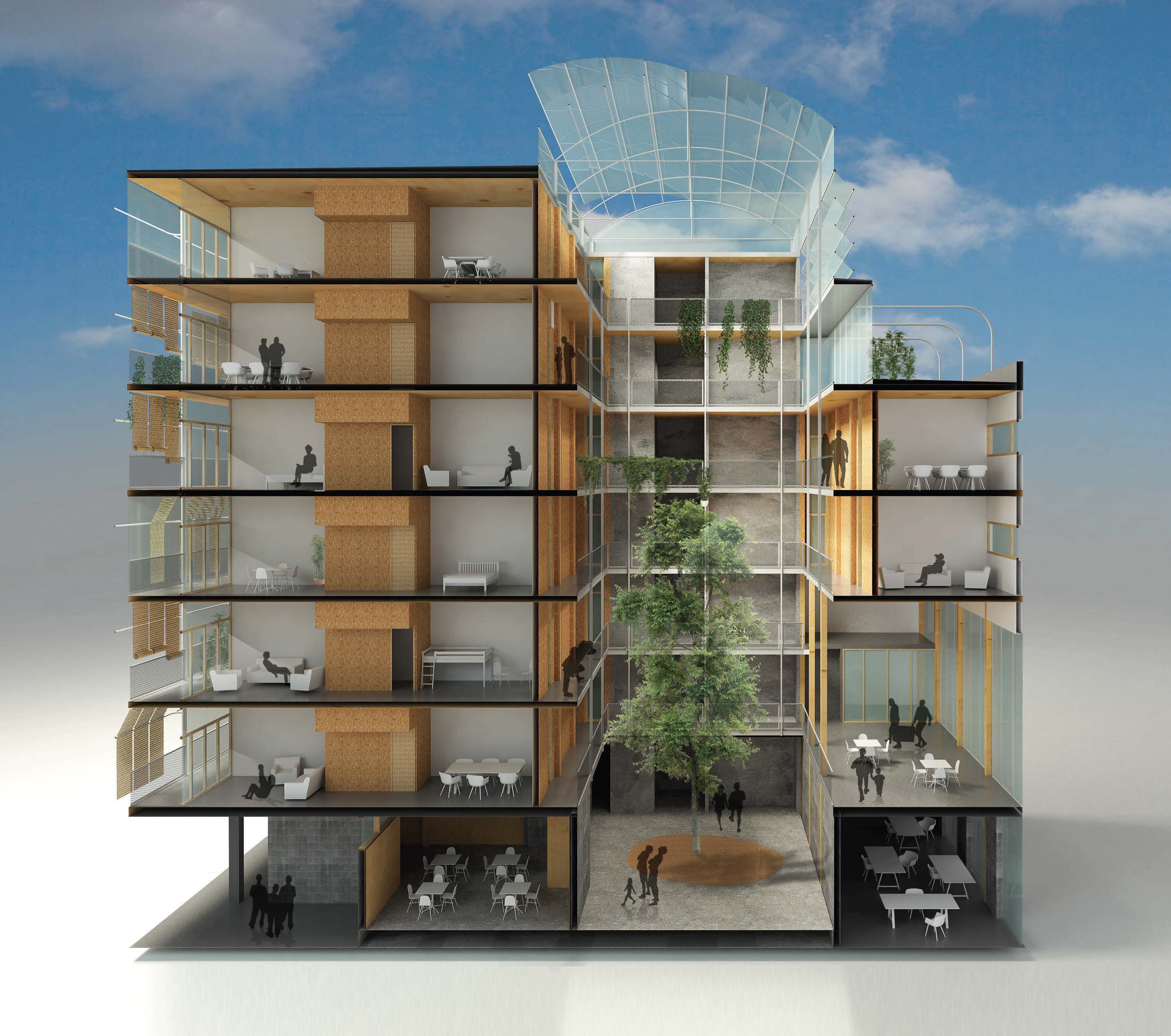 Of which
residential – Di cui Residenziale: % 70

Facilities for the public – Attrezzature pubbliche: % 4

The construction cost of La Borda was 841 €/m2. Similar rates where only achieved in bigger developments, where an economy of scale applies, and using more conventional and less sustainable solutions.
Looking at the Boletín Económico de la Construcción (Construction Economic Bulletin) of Spain, a building of collective housing for rental between party walls building cost should be around 1.193€/m2, while social housing at 916€/m2.
If we compare with two other social housing project developed by the local government in Barcelona in similar years we find much higher rates: housing for young people in Fabra i Coats (2018, 4.252m2): 1.316€/m2; and social housing at the Marina del Prat Vermell 1.094€/m2 (2021, 72 units).
Because the community had to find the funding themselves, lowering the construction cost was always a priority to not compromise affordability. Different mechanisms where applied, for instance a certain degree of self-construction by the inhabitants. Also, construction was divided in several phases, being the first one the minimum to be able to settle, and leaving certain aspects pending on the arrival of new funds and days of self-construction. After people moved in, and in only two years, solar panels have been installed, and the communal kitchen and dining room finished.

Rental/sale cost compared to market price
Costo di affitto/ vendita rispetto al mercato
According to the Rental Price Reference Index by the regional government, a house of similar characteristics would cost 12,63€/m2, while La Borda’s monthly fee is around 7€/m2 (incorporating the share of communal spaces). Also the contract is for life (as long as the inhabitants fulfil the rules), instead of the 5 year contract without obligation of renovation of the free rental market, giving more stability to the tenants.
The average price in Barcelona is 13,10€/m2, and it increased almost 40% only from 2014 to 2020. The monthly fee in La Borda would be stable in time, so if the prices keep growing, the project would be even more affordable.
The monthly fee also includes maintenance, so no extra costs are expected in the future for the residents.

Rules of allocation – Regole di assegnazione
All the inhabitants should be under a maximum monthly income and shouldn’t have any property. Also, solidarity mechanisms have been included, like a mutual fund to cover the expenses of people who can not pay the monthly fee, under certain criteria.

Vulnerable users are not included in a special way nowadays. Only certain people (elders, pregnant, convalescent,…) are except of certain duties that the community imposes to its members. Right now the community is discussing the introduction of criteria of positive discrimination for certain collectives or not when choosing new inhabitants.

Involvement of inhabitants in the building process – Coinvolgimento degli abitanti nel processo
The project was self-promoted. This implies that the participation of future users in the process (design, construction and use) is the most important and differential variable of the project, generating an opportunity to meet and project with them and their specific needs.
In the early stages of the project, Lacol interviewed the future residents to gain a detailed understanding of their individual energy usage and needs, while increasing their collective awareness of energy poverty and the climatic performance of different buildings and materials.
During the design, the participation was articulated through the architecture commission, which was the link between the technical team and the general assembly, and the one in charge of preparing the architectural workshops. We have conducted several participatory workshops, including how inhabitants imagined the project, program, project strategies, environmental strategies, typology, and sessions for the validation of the preliminary project.

Community accompaniment in the life of the building – Accompagnamento della comunità nella vita dell’edificio:
The building is now managed by the community in different working groups, and still advised by the architects and some of the consultants. Some of the apartments are being monitored with different sensors, and energy and water consumptions are being analyzed. This is helping to improve the performance of the building. For instance, an important reduction of wood pellets for the collective boiler was done, after studying the performance of the building the first year of use.

Functional mixitè – Mix funzionale:
In the ground floor there is a commercial space where an organic food coop, already existing in the neighborhood, is now located. This use was discussed by the community and it was intentional that an existing Social Economy project, specially related with food, was chosen. They pay reduced rent compared to the free market, and due to their new location they doubled members and transactions.
Also, a public passage was opened to better connect the area with the future park that would be built in front of the building. The space was built by La Borda but it is now considered a public street open 24h and maintained by the municipality.

Common spaces and shared living-Spazi comuni e abitare condiviso:
The building program proposes community spaces that allow stretching the fact of living, from the private space to the public space to enhance the community life. These spaces are: kitchen-dining room, laundry, multipurpose space, space for guests, health and care space (to be finished in a near future), storage in each plant, bike parking, and exterior and semi-exterior spaces such as the patio and roofs. All of them articulated around a central courtyard, a large relationship space reminiscent of the “corralas”, a typology of popular housing in central and southern parts of Spain.

ENVIRONMENTAL SUSTAINABILITY-SOSTENIBILITÀ AMBIENTALE
The participation of the user in all its phases has been crucial for defining the environmental strategies, and for challenging standards and current regulations.
The first action to reduce the environmental impact during construction was to redefine the program. The co-operative decided to not build underground parking for cars and estimated a saving, after 75 years, (construction and use) of 500-800 tons of carbon dioxide. This strategy also gives a direct benefit in sustainable mobility and reducing the inhabitants’ ecological footprint. A change in the regulations was needed; this was made at city level and now applies to all new buildings. The second action was the use of wood for the structure; this became the highest building constructed from cross-laminated timber in Spain.
Once the program was defined, passive bioclimatic strategies were developed, as much as possible with solutions that involve the users’ active role in climate management. The patio covered with a greenhouse allows solar radiation to be captured in winter, while the chimney has been designed to assist ventilation in the summer. A high level of air-tightness was specified in doors and windows. La Borda has a centralized system to generate hot water and heating using a biomass boiler, and solar panels installed in the upper terrace. The result is a net energy consumption rate of almost zero while maintaining a level of comfort in the domestic spaces that comes with the least associated cost.

La Borda housing cooperative is a development self-organized by its users to access decent, non-speculative housing that places its use value in the center, through a collective structure. The idea of a housing cooperative was born in 2012 as a project of Can Batlló driven by the community in the process of recovery of the industrial premises, and the neighborhood and cooperative fabric of the Sants neighborhood of Barcelona.
The project is located on a public land of social housing, with a leasehold of 75 years. Located in Constitució Street, in a bordering position of the industrial area of Can Batlló with a facade to the existing neighborhood of La Bordeta.

There are three fundamental and cross-sectional principles of the project,
(1) redefine the collective housing program
The building program proposes 28 units (40, 60 and 75m²) and community spaces that allow stretching the fact of living, from the private space to the public space to enhance the community life. These spaces are: kitchen-dining room, laundry, multipurpose space, space for guests, health and care space, storage in each plant, and exterior and semi-exterior spaces such as the patio and roofs. All of them articulated around a central courtyard, a large relationship space reminiscent of the “corralas”, a typology of popular housing in central and southern parts of Spain.

(2) sustainability and environmental quality
The objective is to build with the lowest environmental impact possible, both in the construction work and during its life and, above all, achieve comfort in homes with minimum consumption, to reduce the overall costs of access to housing and eliminate the possibility of energy poverty among users. We started from the conviction that the best strategy is to reduce the initial demand of all the environmental vectors of the building (energy, water, materials and waste), especially at the energy level, where we prioritized passive strategies to achieve maximum use of existing resources.

(3) user participation
Self-promotion and subsequent collective management implies that the participation of future users in the process (design, construction and use) is the most important and differential variable of the project, generating an opportunity to meet and project with them and their specific needs .