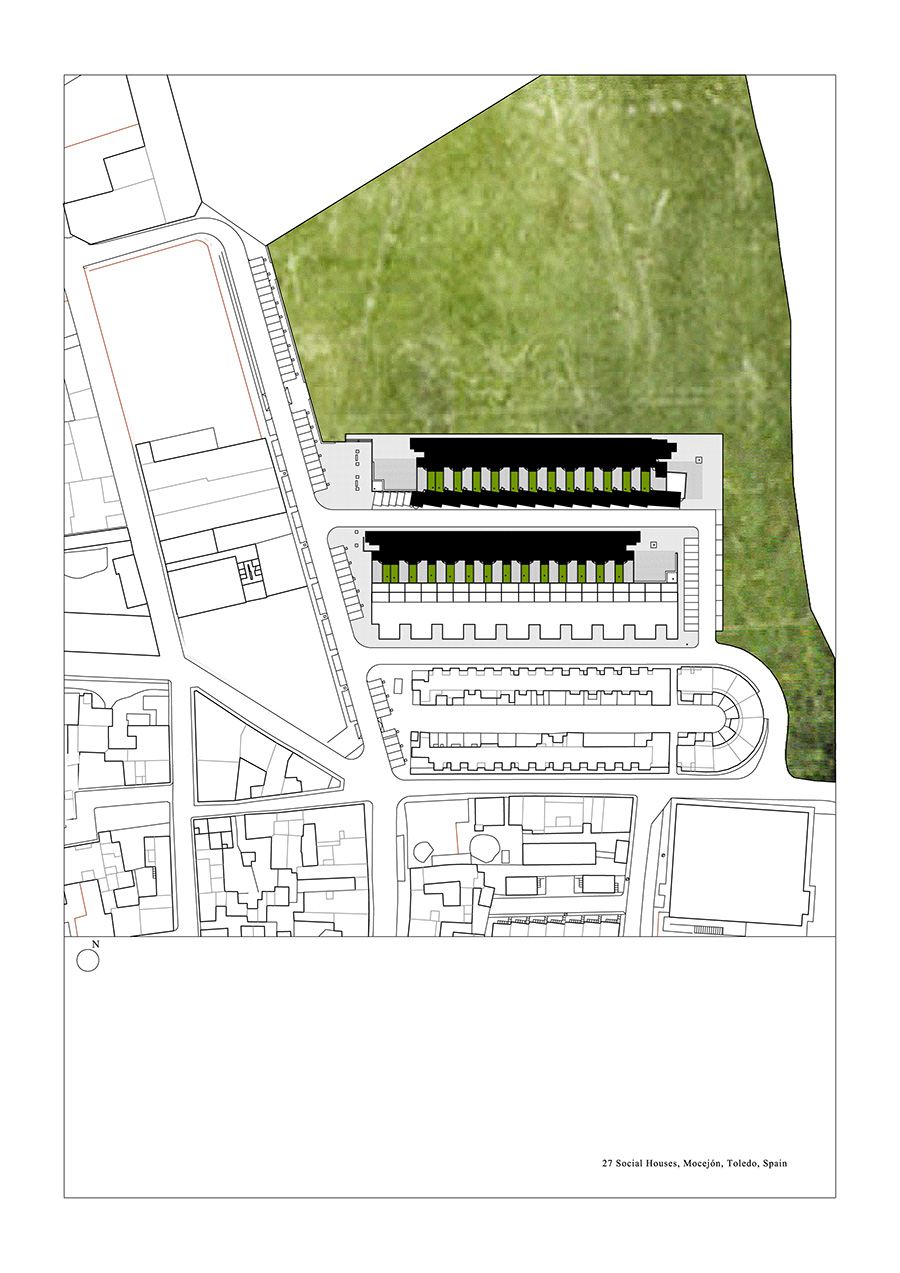 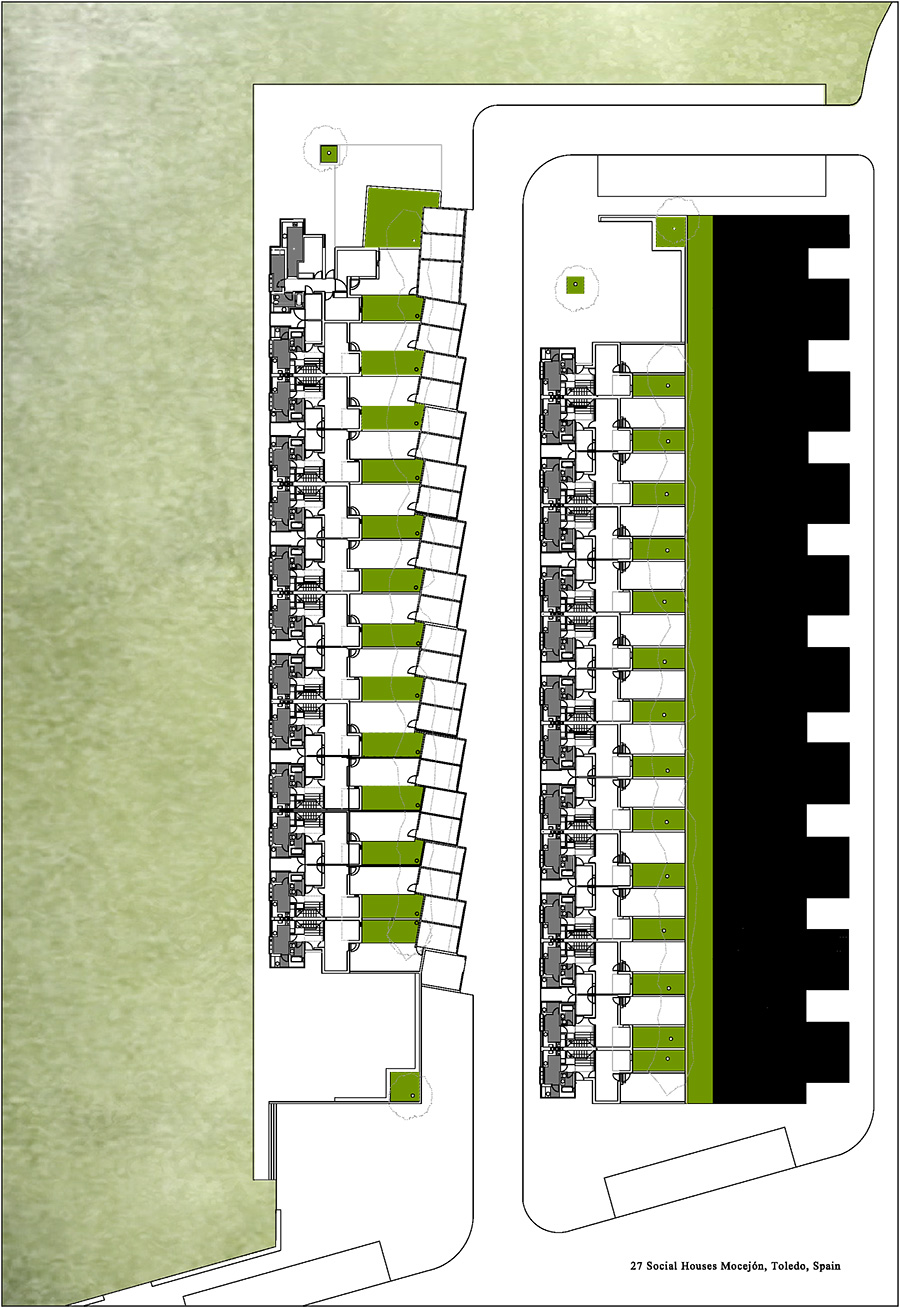 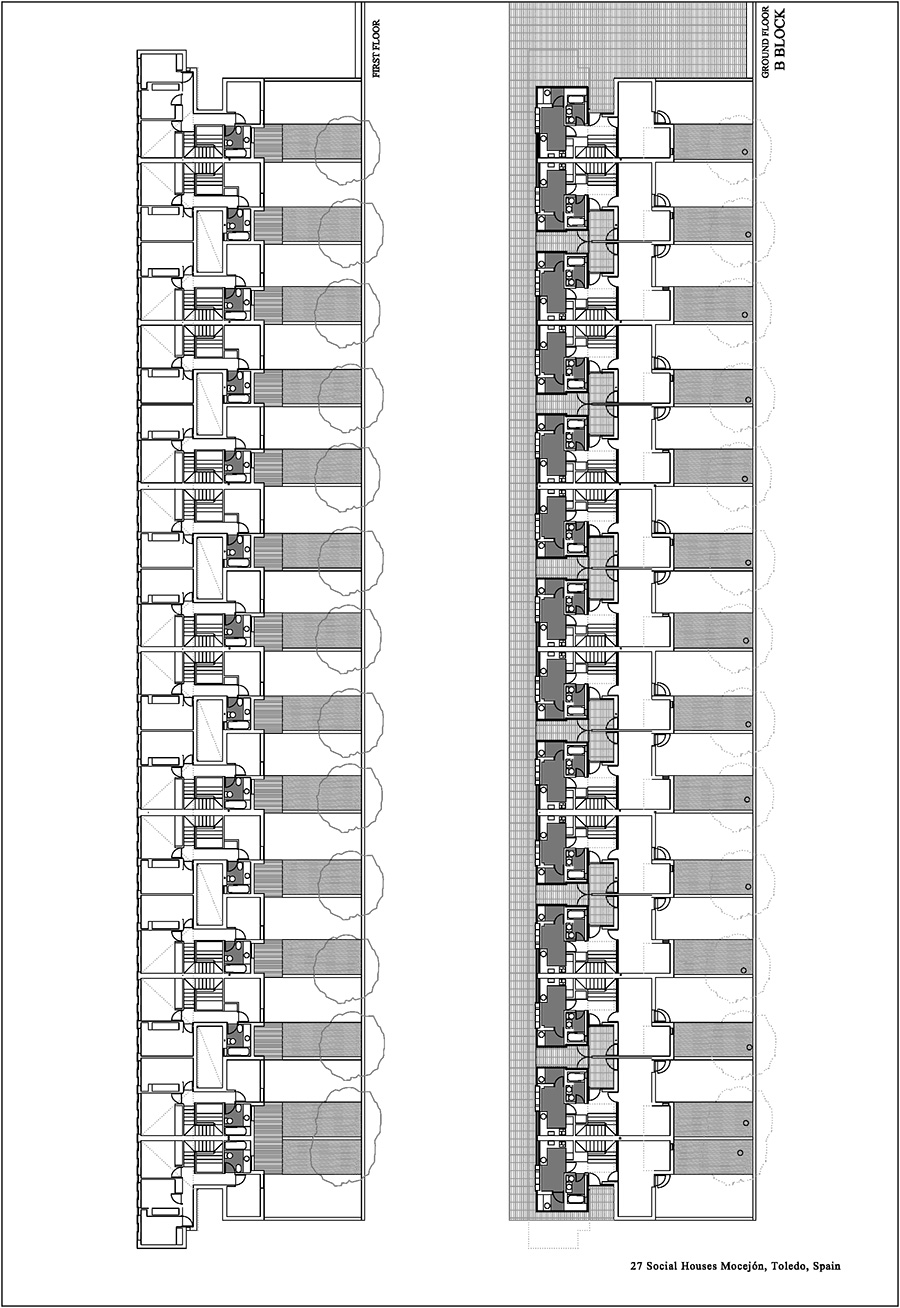 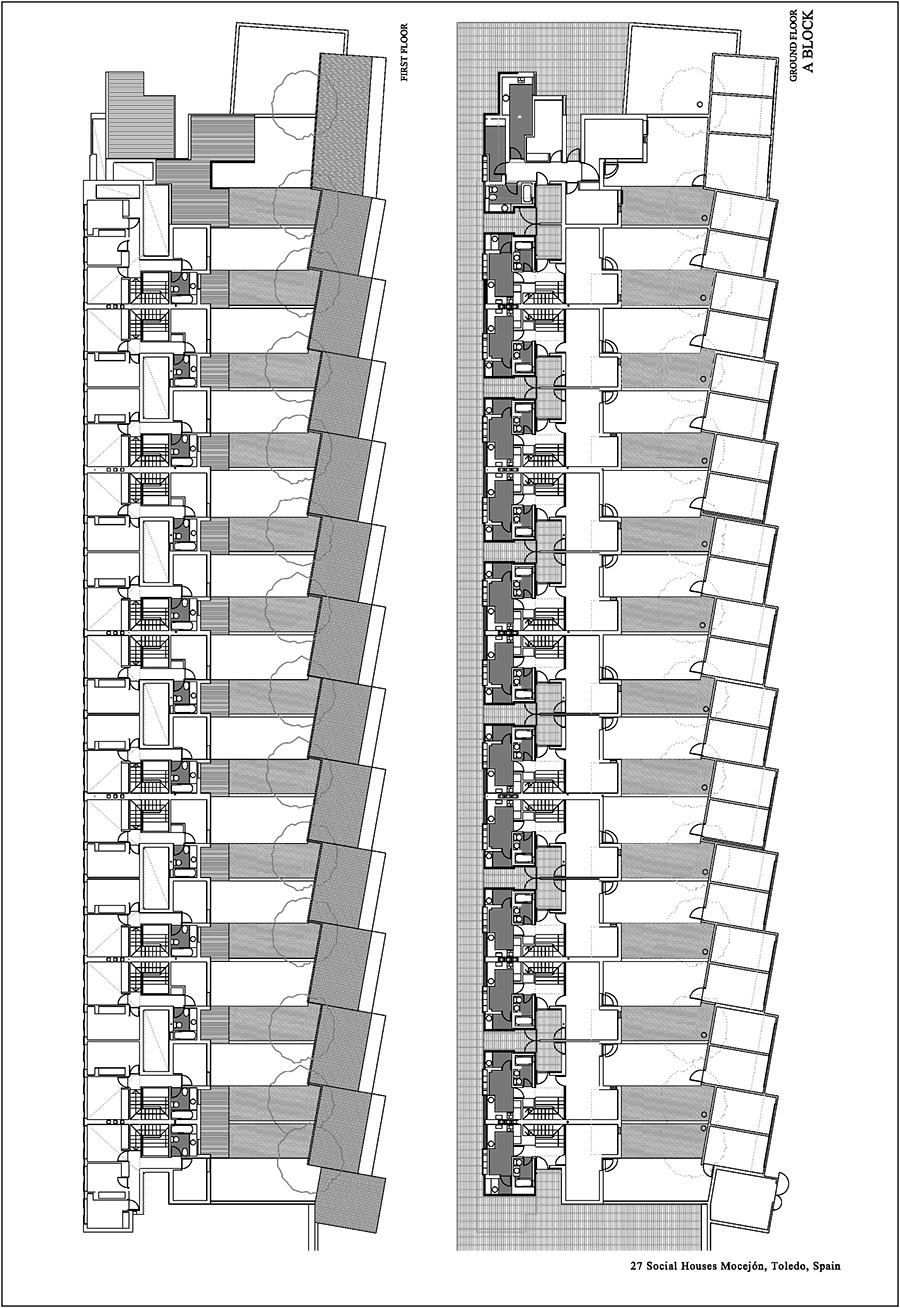 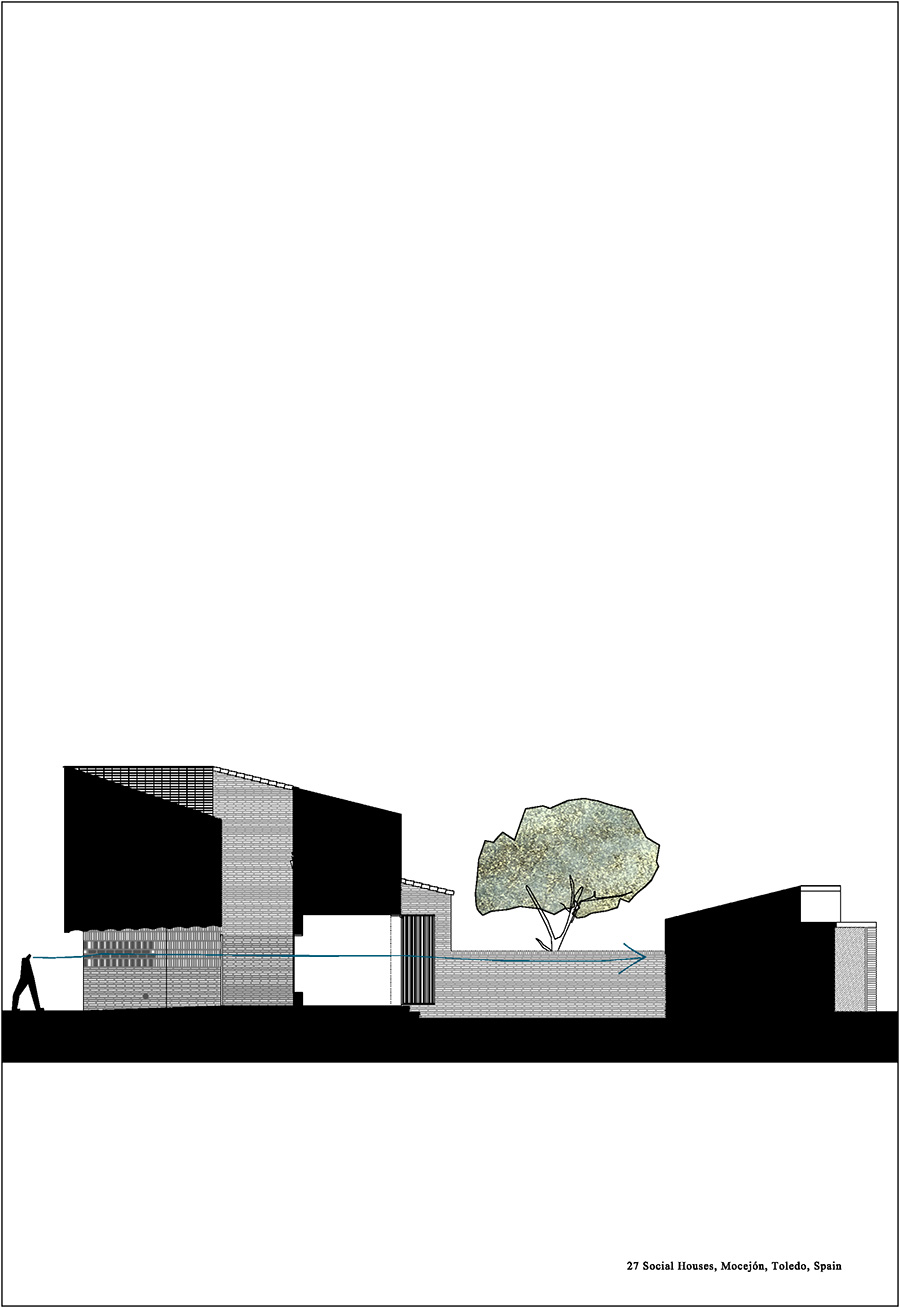 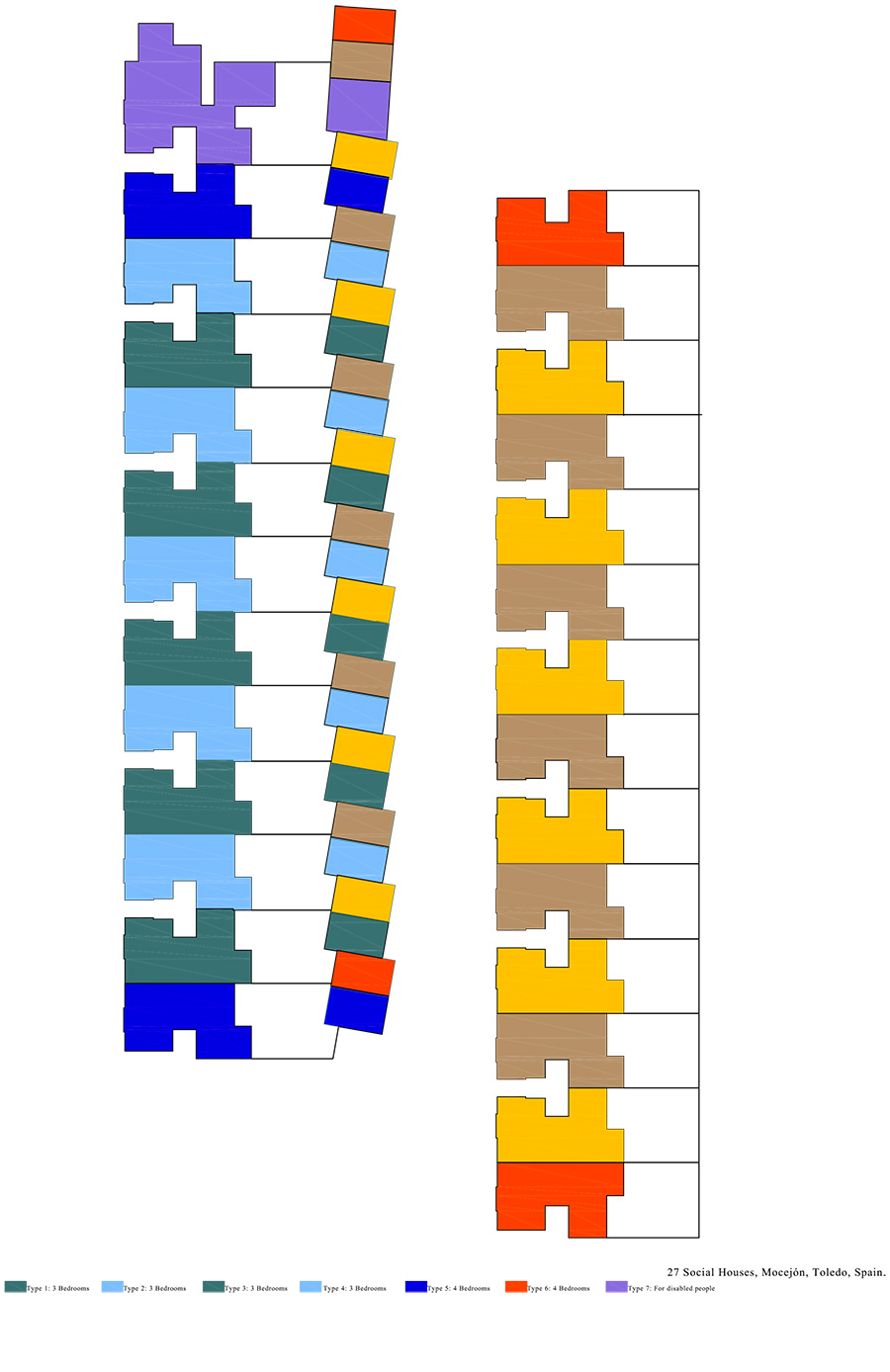 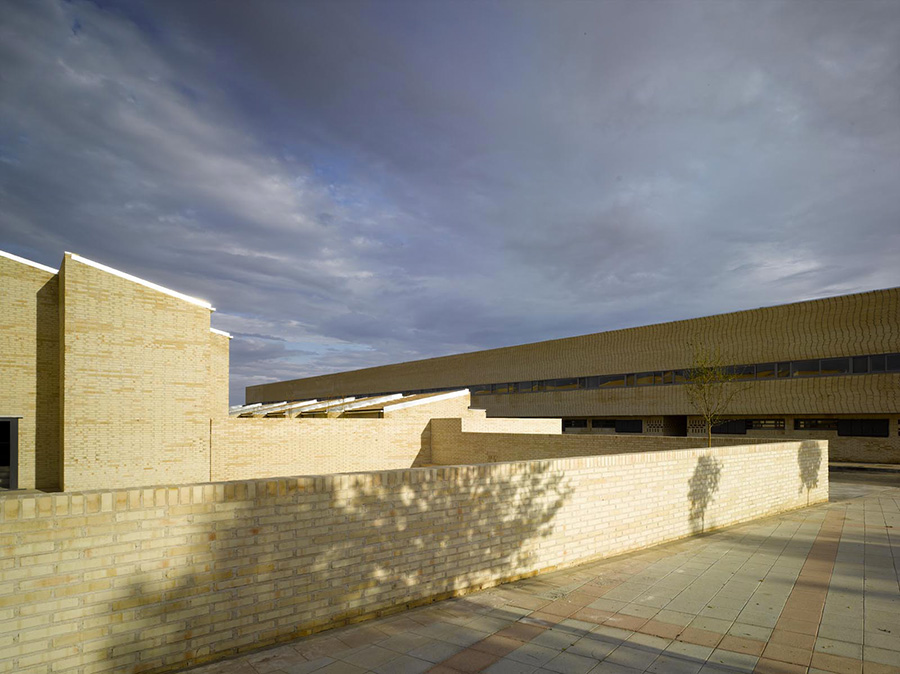 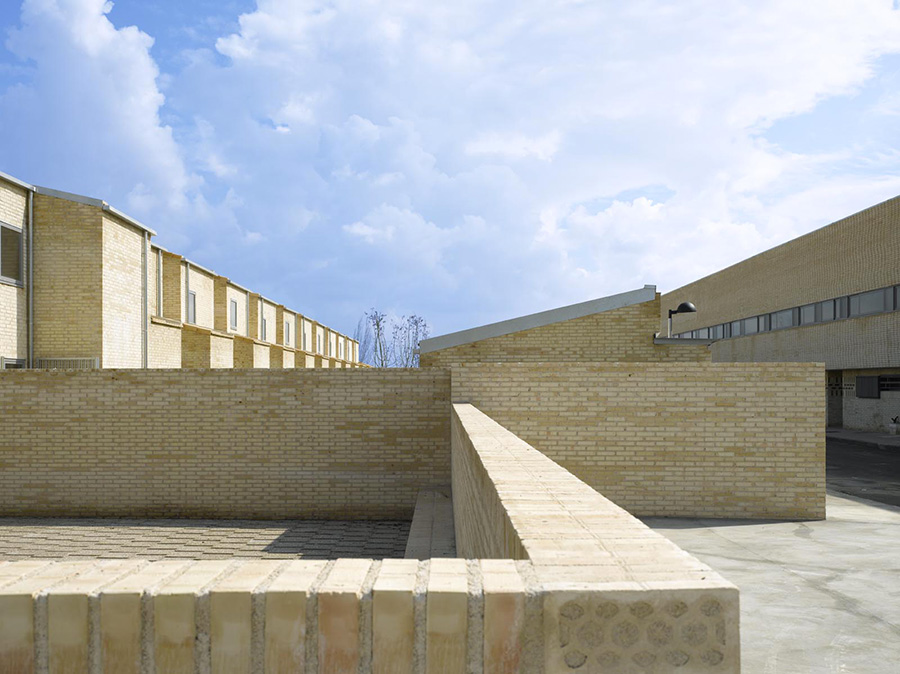 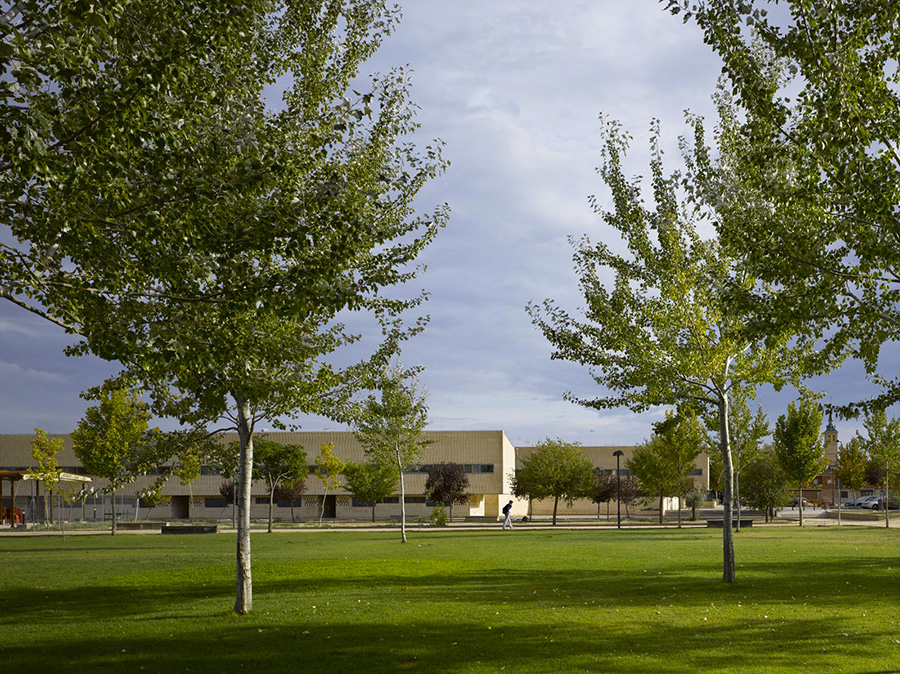 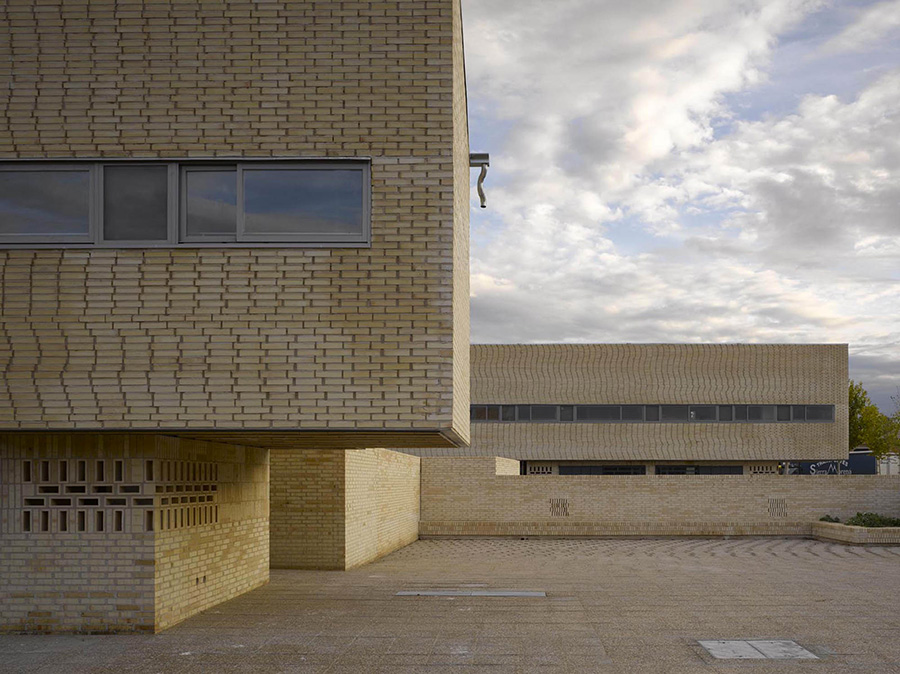 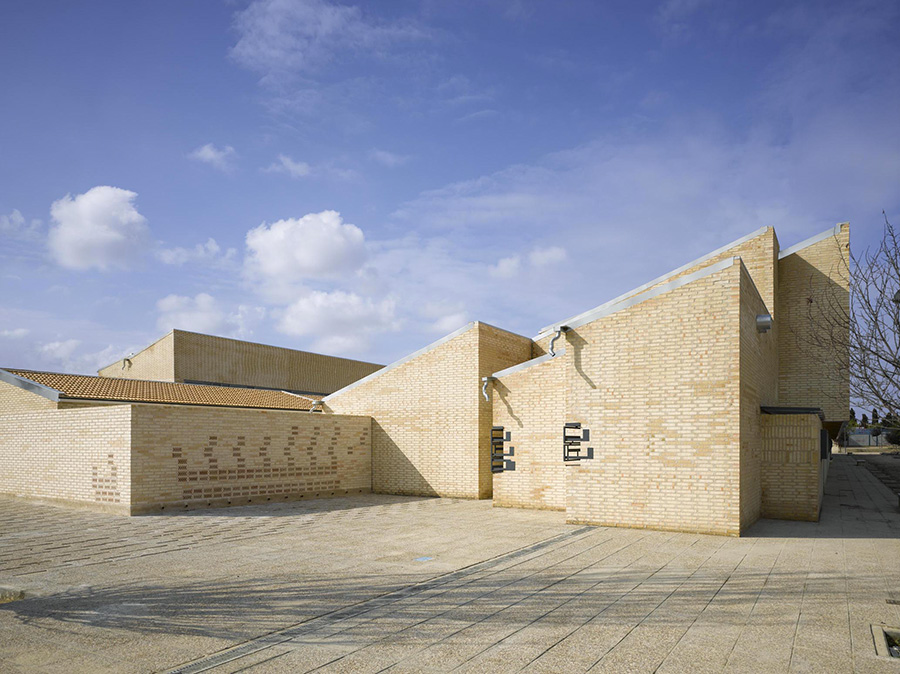 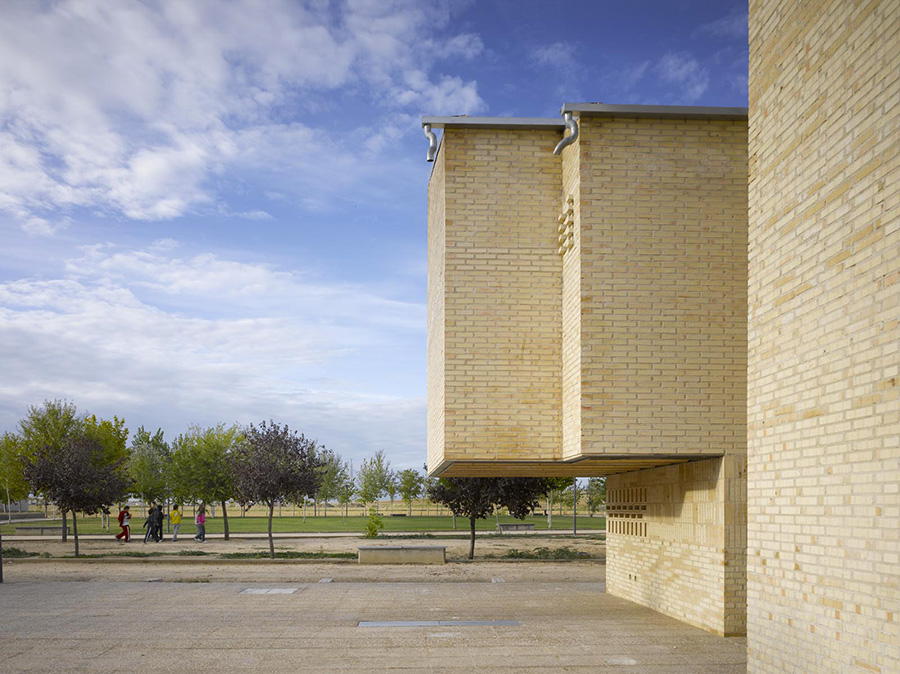 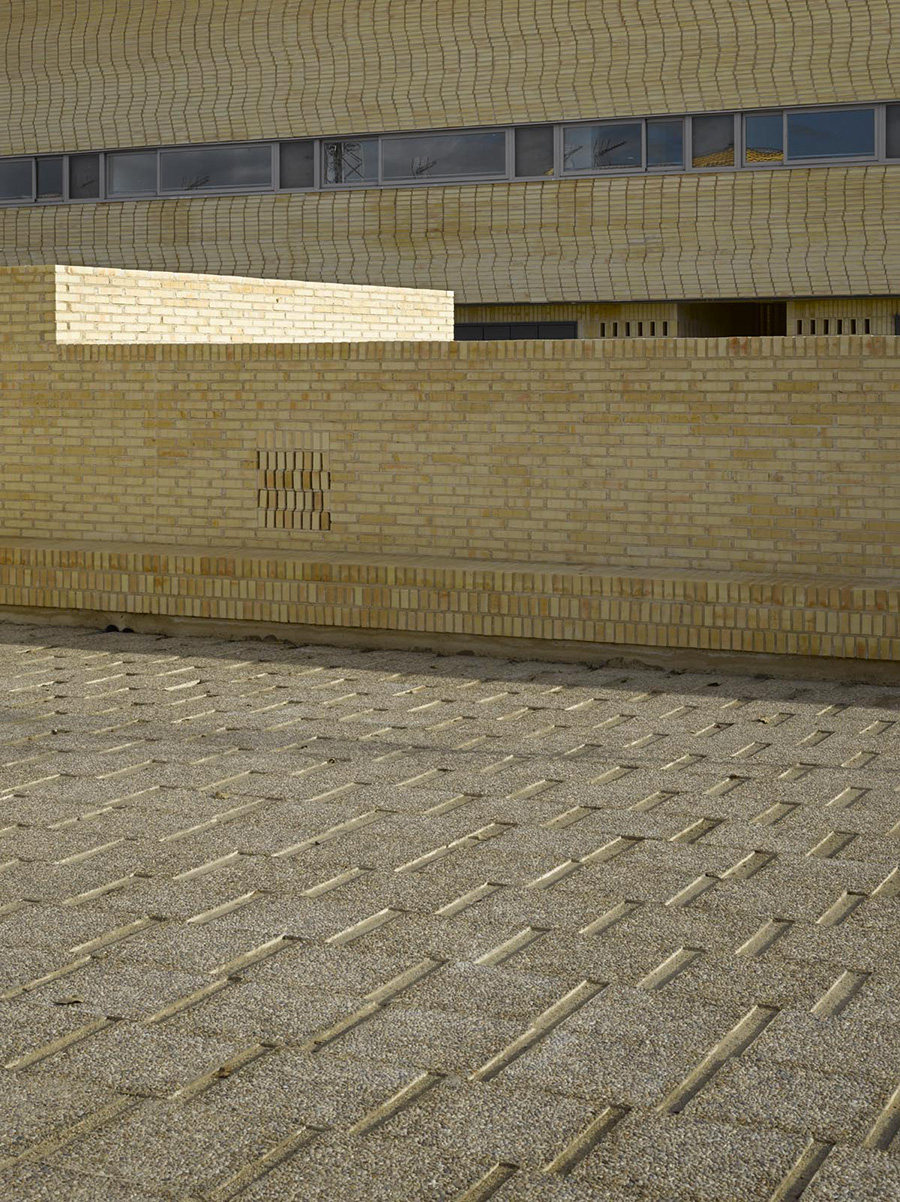 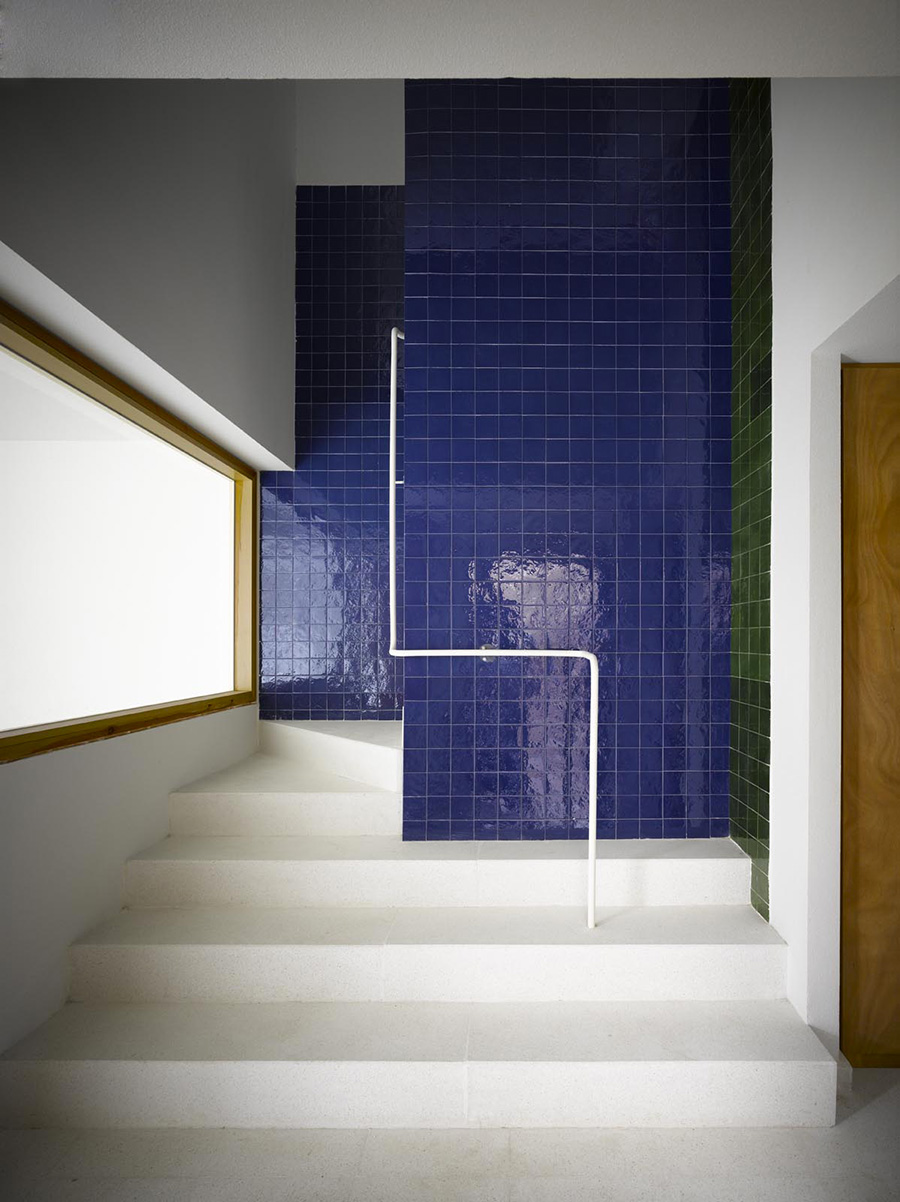 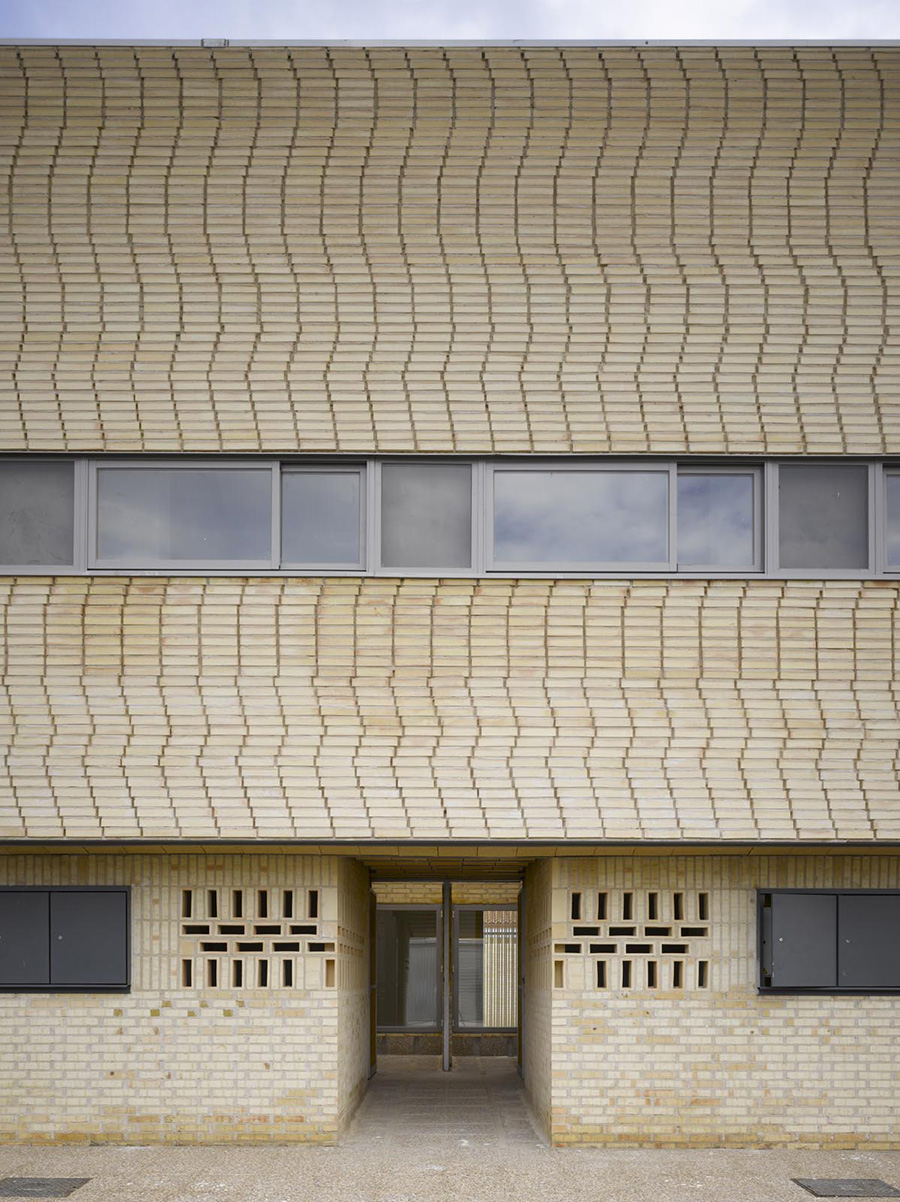 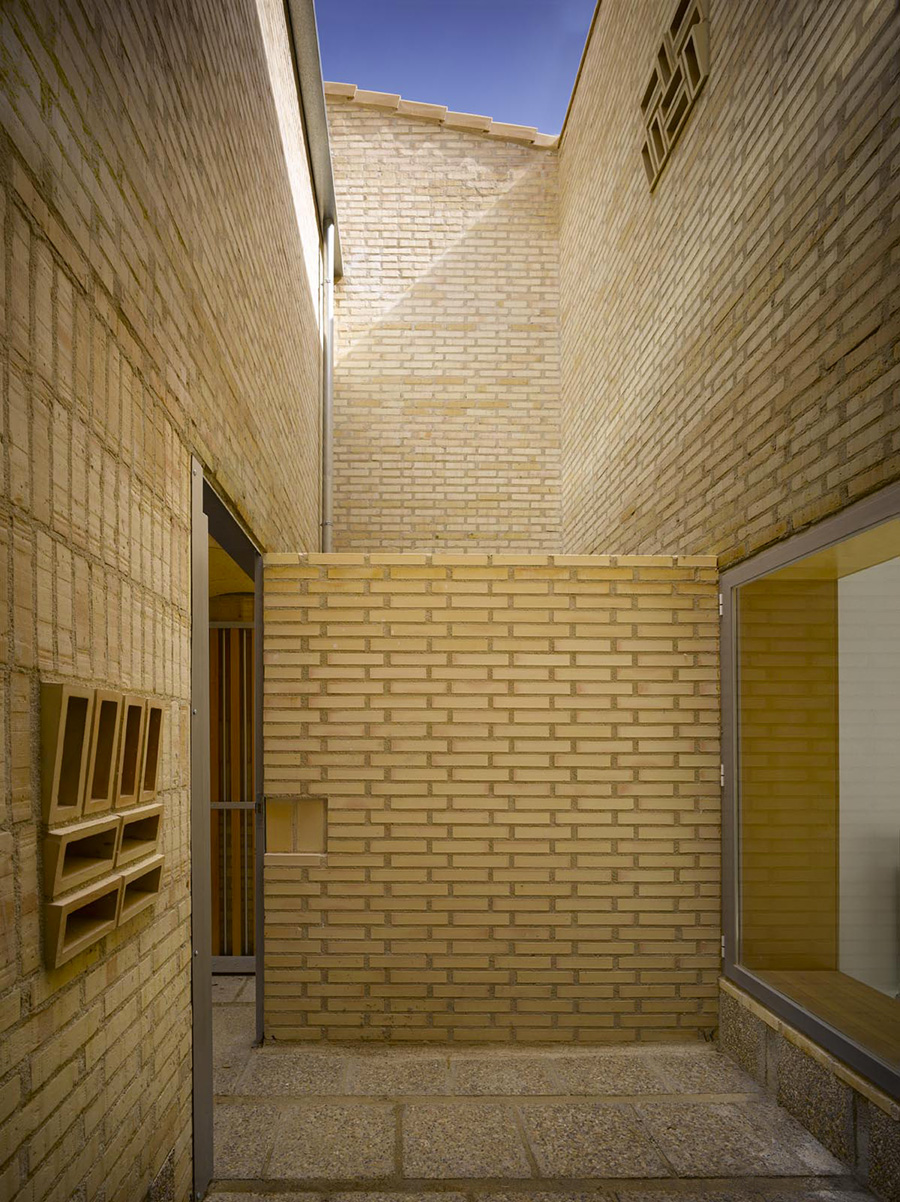 Recommending party
The project has been submitted by: Luis Martínez Santa-María, architect

1. Mocejon dwellings are located in a plain, just at the end of the village. From far distanced visions they will appear as two elongated bars. A deep and horizontal shadow line, correspondent to the linear upper window, also will be clearly appreciated.
Passing-by trains or agricultural and cattle ships floating abstractly in the middle of the countryside could have been influential images at the beginning or the project.

2. There are not frontal doors to the dwellings. Each one of the several openings positioned in the façade drives you to a little court which is shared by every two houses. This absence of ground floor door, close to the existence of the first floor fenetre a longeur,  impedes the reading of the exact measure of each house. And that is important because every house does not measure very much.

3. During building process the use of brick was winning and gaining importance. We could say that there was a radicalization of the use of the bricks. But, is it not each work the amazing expression of a matter radicalization?

4. The investigation carried out in this work centres on some mechanisms of organization, join and significance, all melted in order to achieve a house bigger than it really is.
You go into the house just in its centre, a fact which eludes the presence of corridors and distributors and that allows obtaining an extra of useful surface destined to increase the surface of the main rooms. The house’s door is hidden in order to prevent the reading of the real measurements, always too limited and disappointing. A dimensional alteration is also insisted on with the long top north window, related to the scale of the place, a big park, and no to the inner divisions of the dwellings.

5. The size of the threshold is increased by means of the court and the entrance corridor. The distance between houses is also augmented by means of interposed garden surfaces. The lack of simmetry can also be observed in the plan composition. Simmetry: such a pernicious characteristic in the usual solutions of attached housings.
There are realized sloping covers which skirts appear inside the housing to encourage this one to which it sits the value of his ceiling and therefore his proximity to the archetype of house.

6. Trough a wide window the stair and the sitting room are connected. It is again the aim to look forward some mechanisms able to make a house to appear bigger than it really is.

7. An abstract composition is obtained using only brick. Could we say that brick, which prize is a constant number, increases progressively its value with each problem resolved, with each constructive responsibility assumed successfully. This is an economical way to build a building with a material which finally seems more expensive that it really is

8. In the upper floor brick has been placed by a disconcerted apparel. Could someone think: it is formalism but it is just the opposite. These brick paraments are in projecting and the brick is being used here as adornment. It is time to recognize that nowadays we are more interested in what bricks adorne than in what bricks support. It is brick signification whith which we are concerned at heart.

9. We have payed a lot of attention to the brick texture. Most of bricks are backside layered in order to make visible the marks and imperfections, the reality of its composition and manufacture. This action turns the brick fabrics nearest, less impenetrable, and that is important. When bricks are placed near hands and eyes, they interact mysteriously with the body.