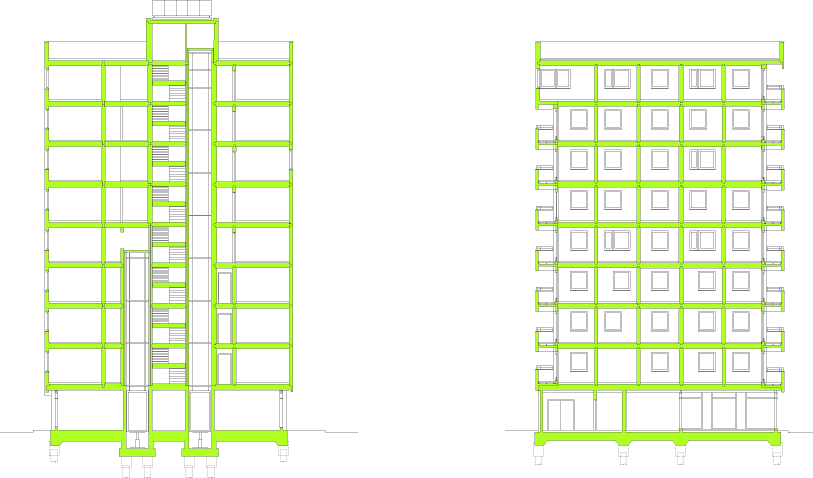 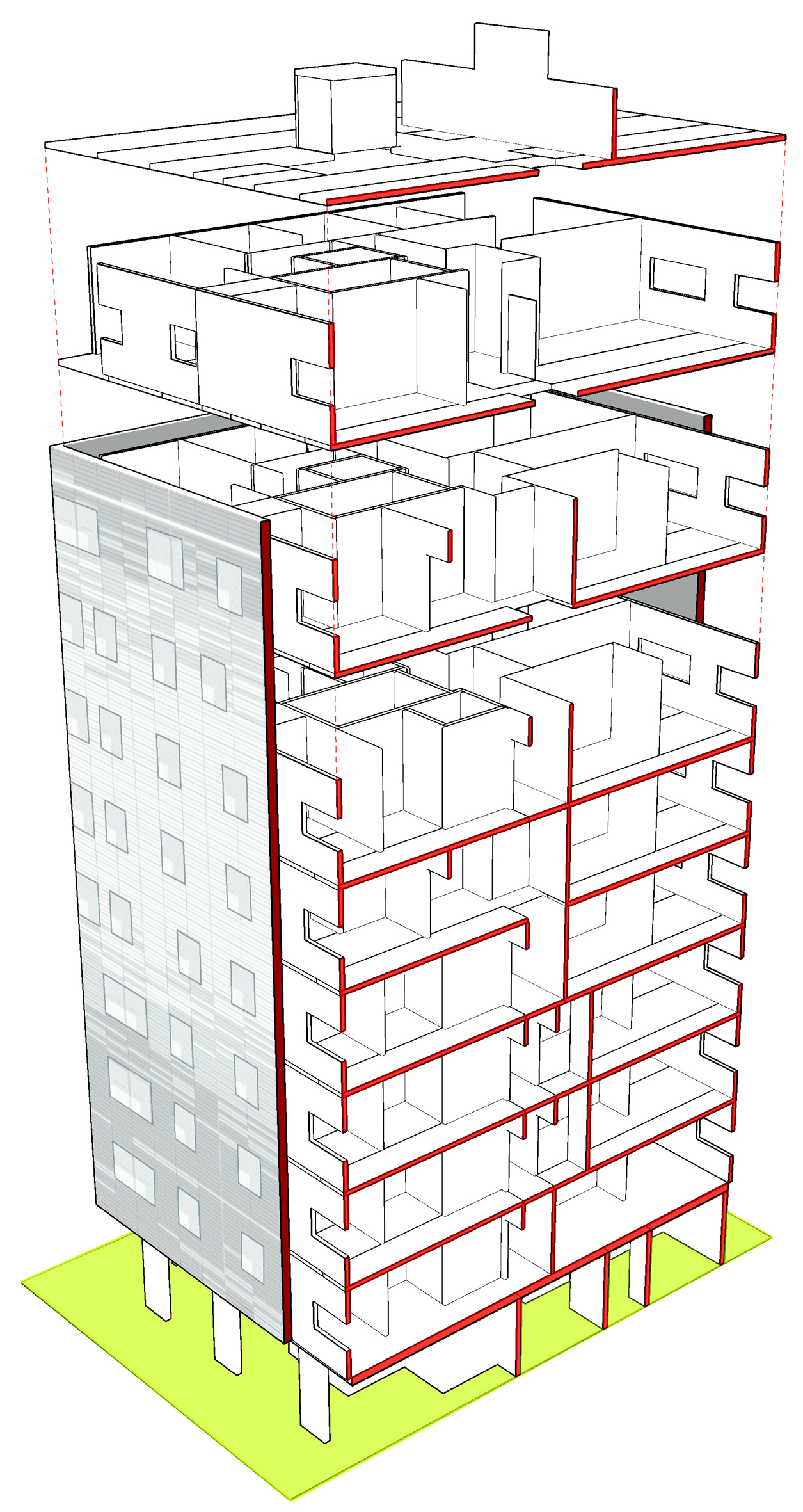 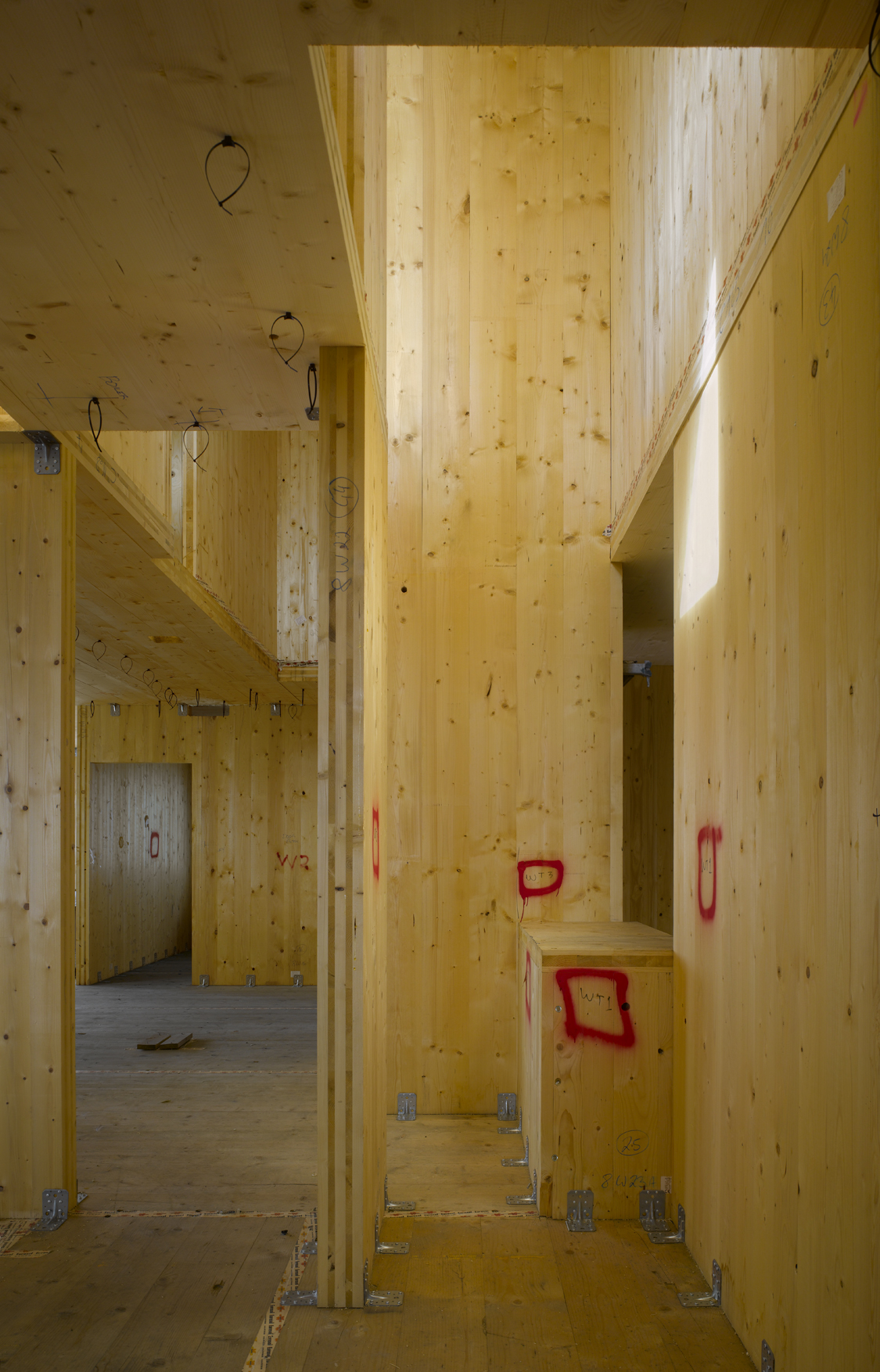 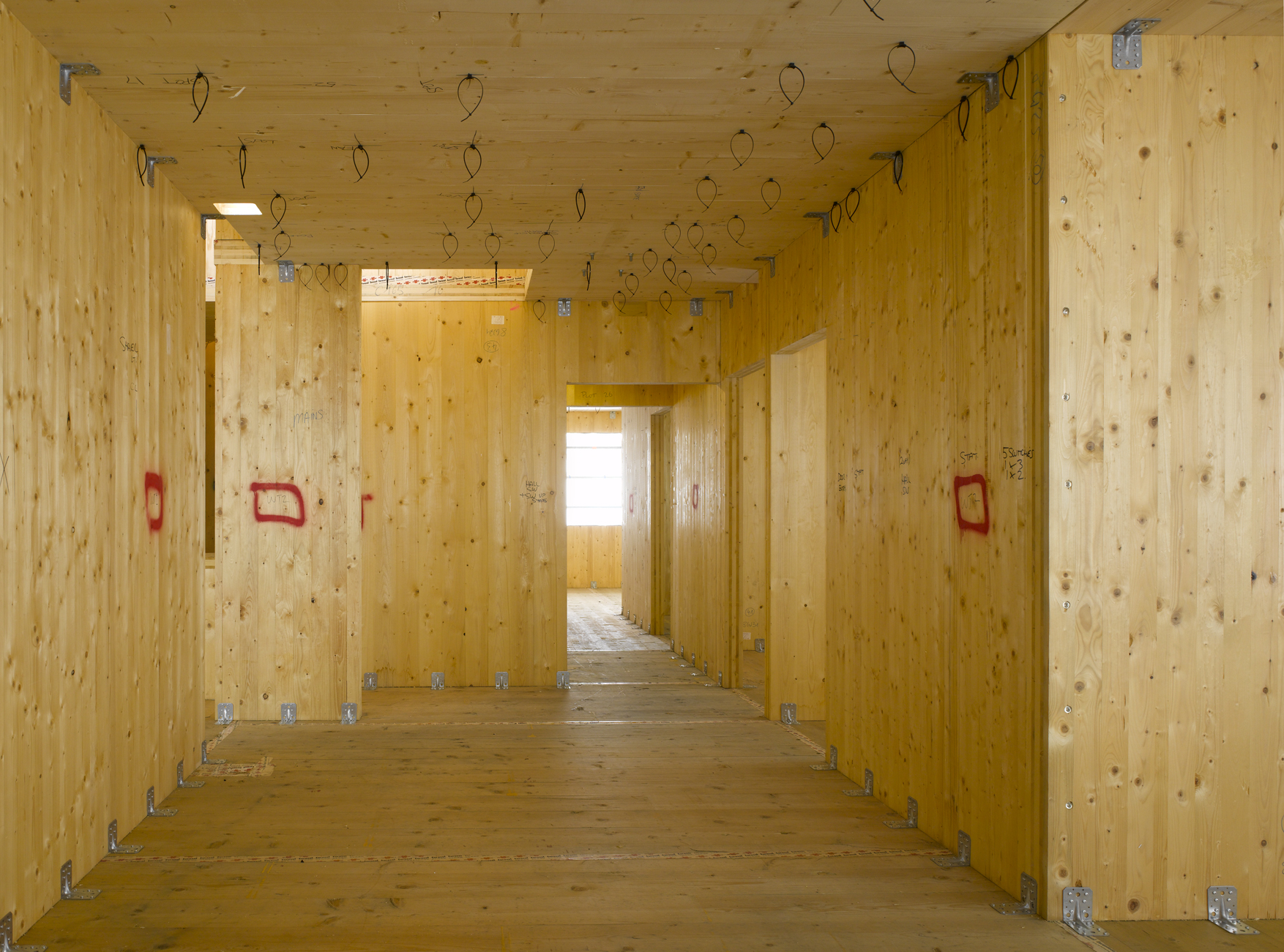 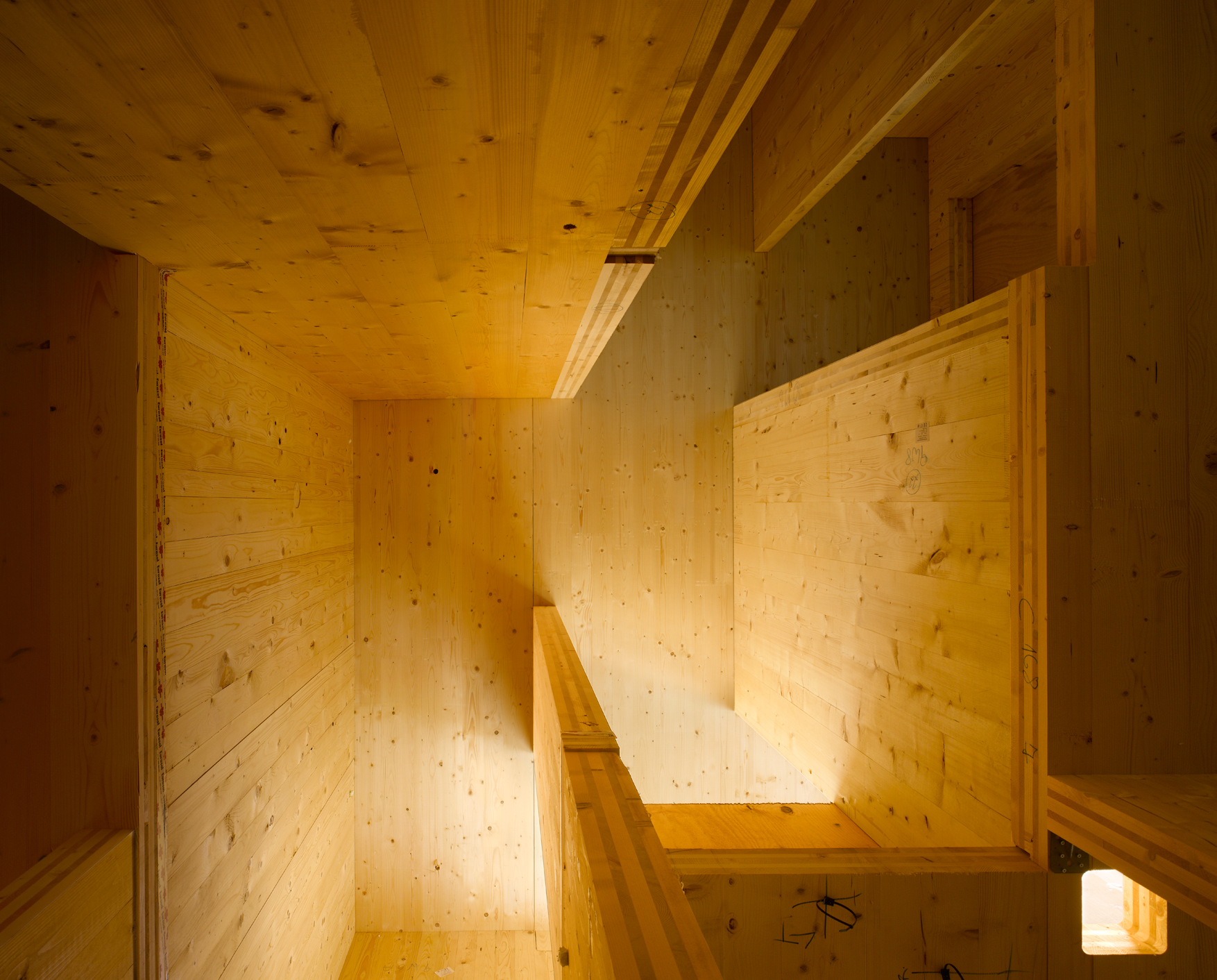 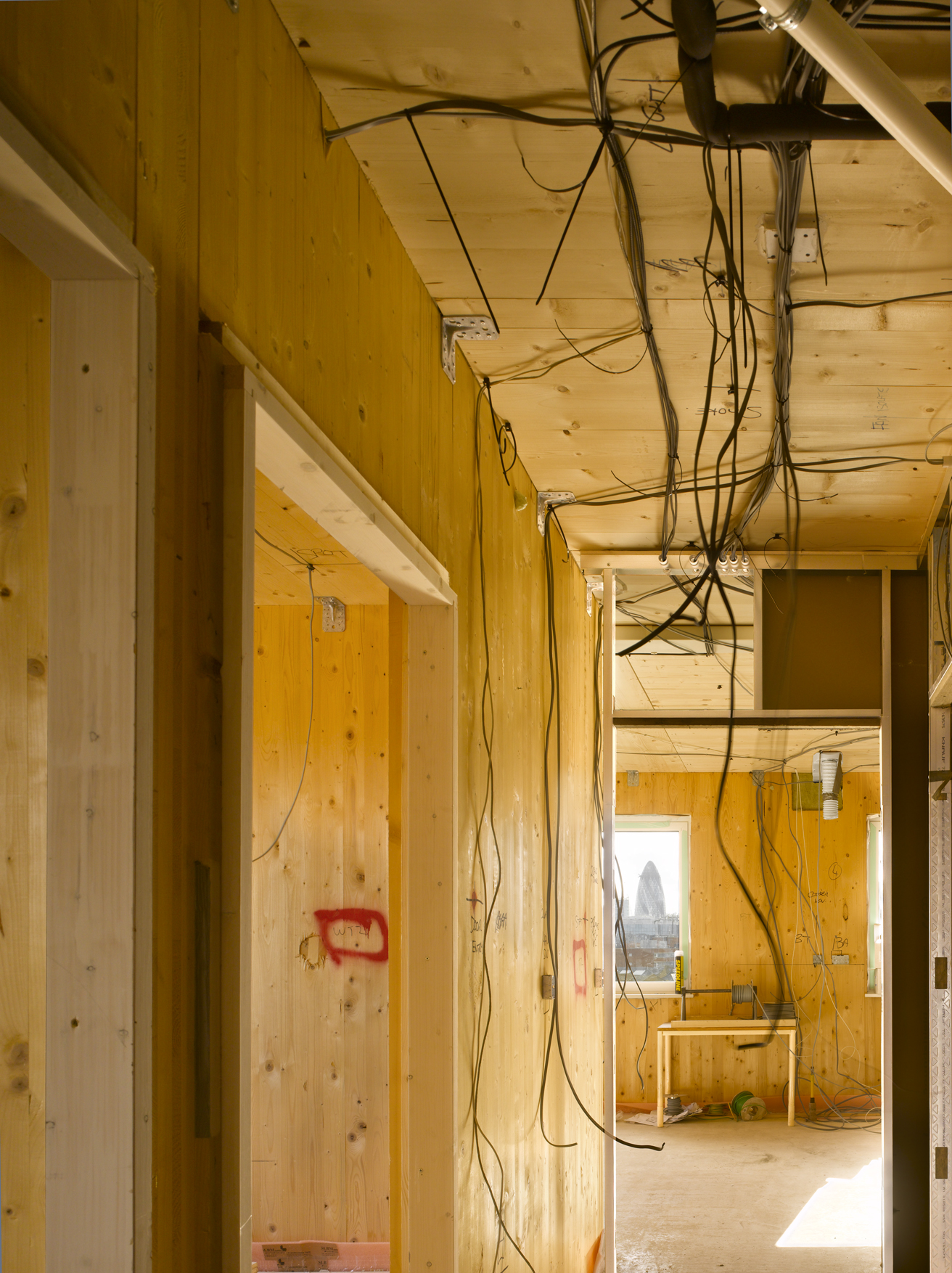 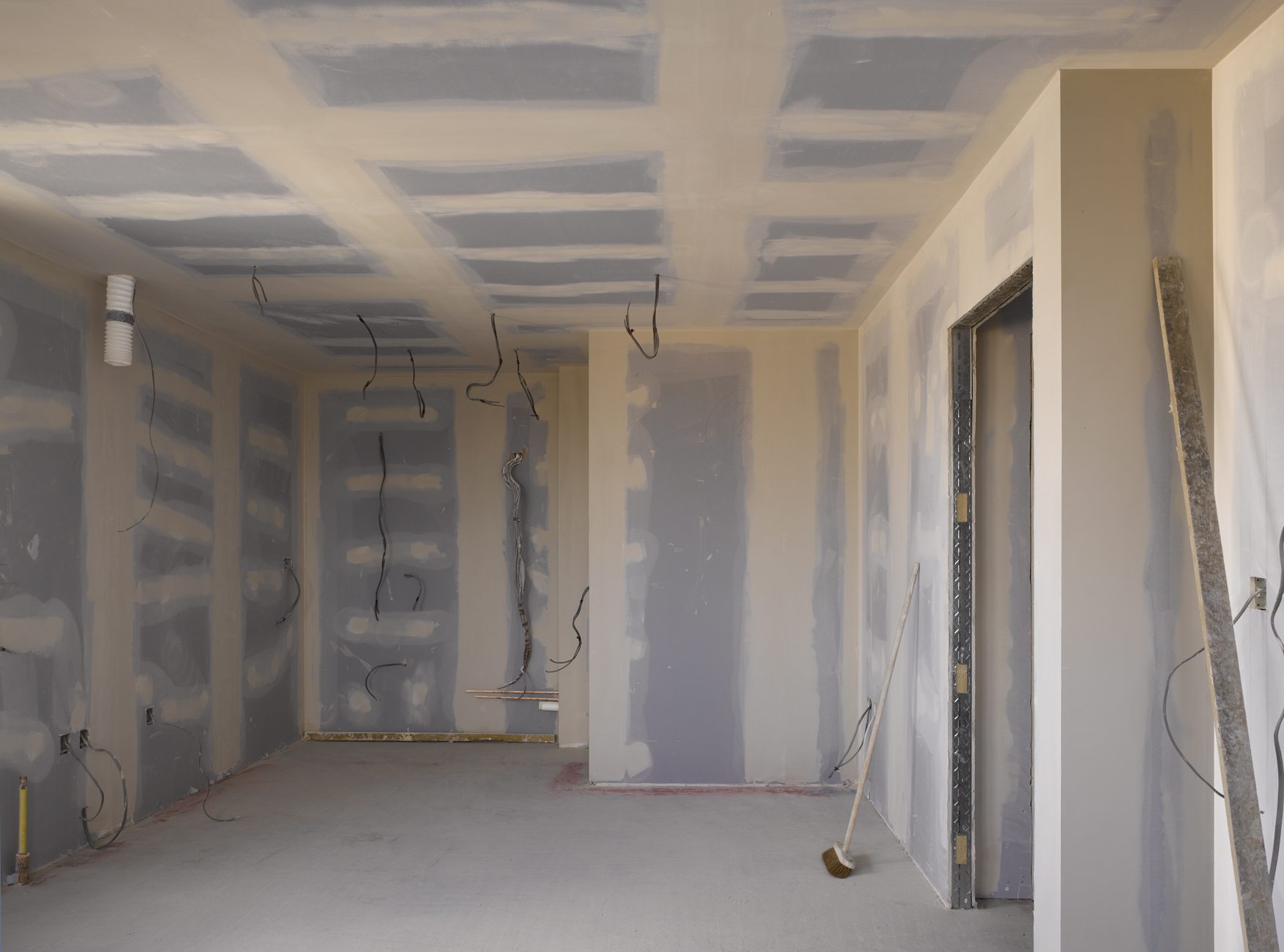 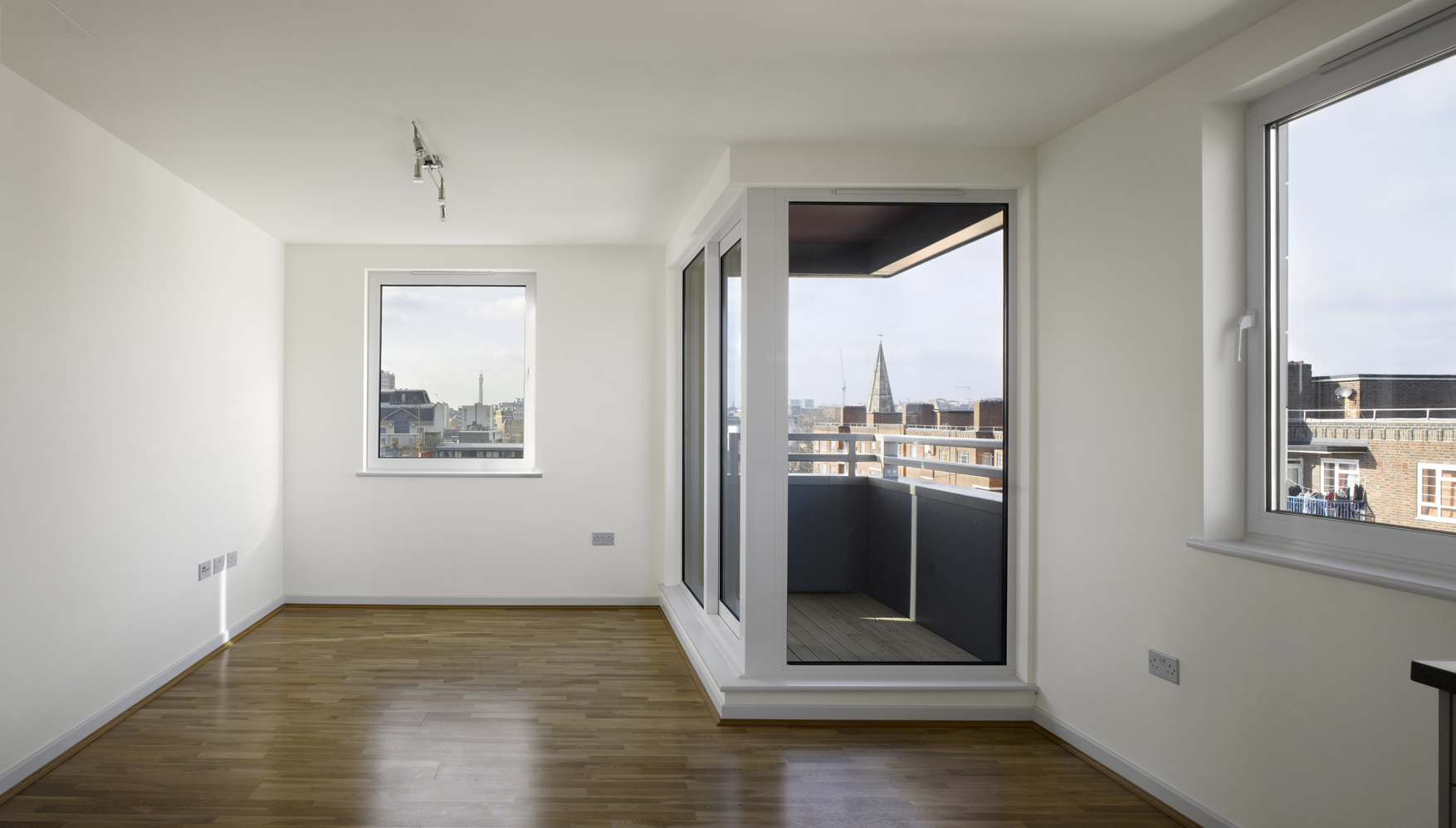 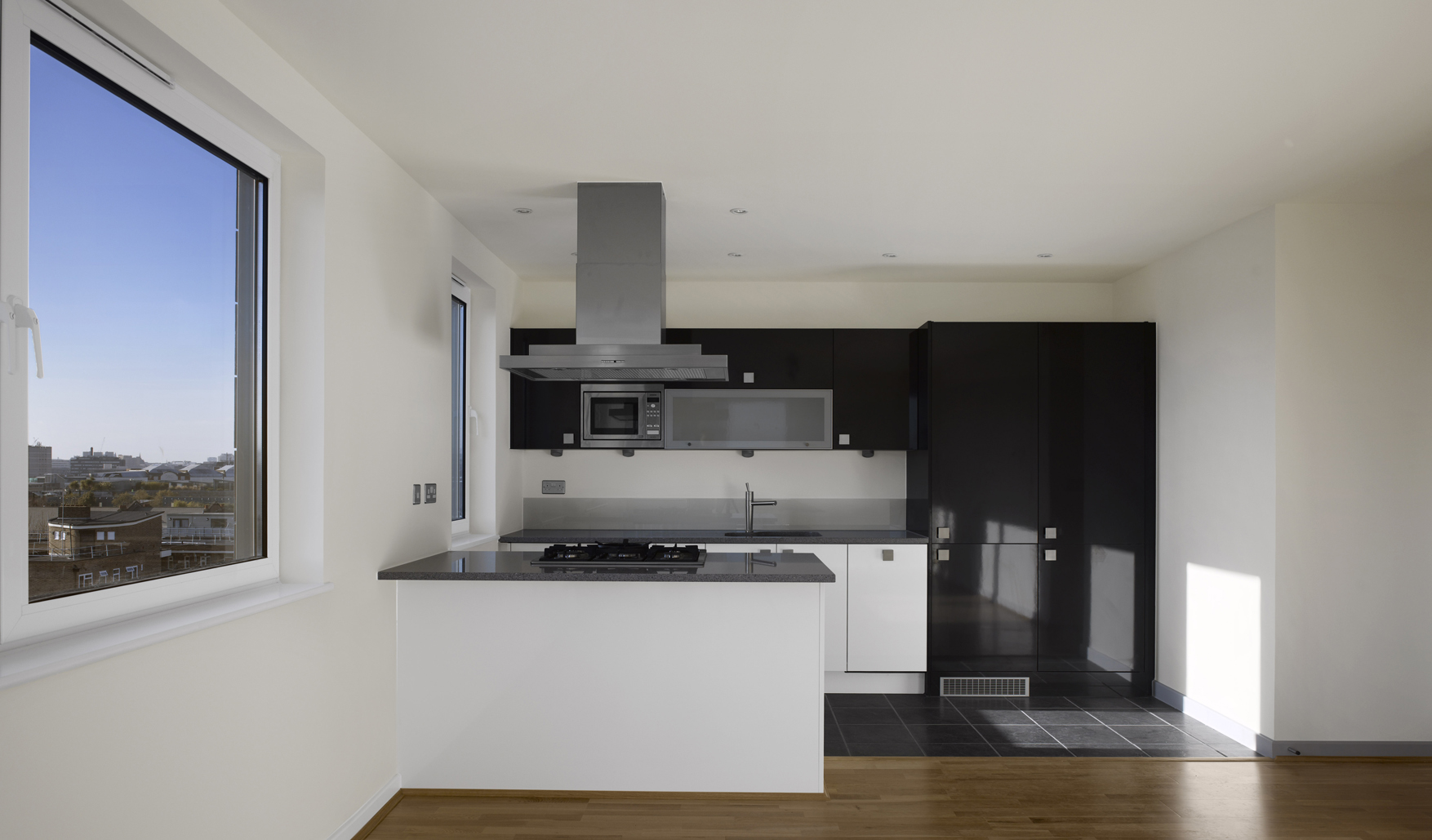 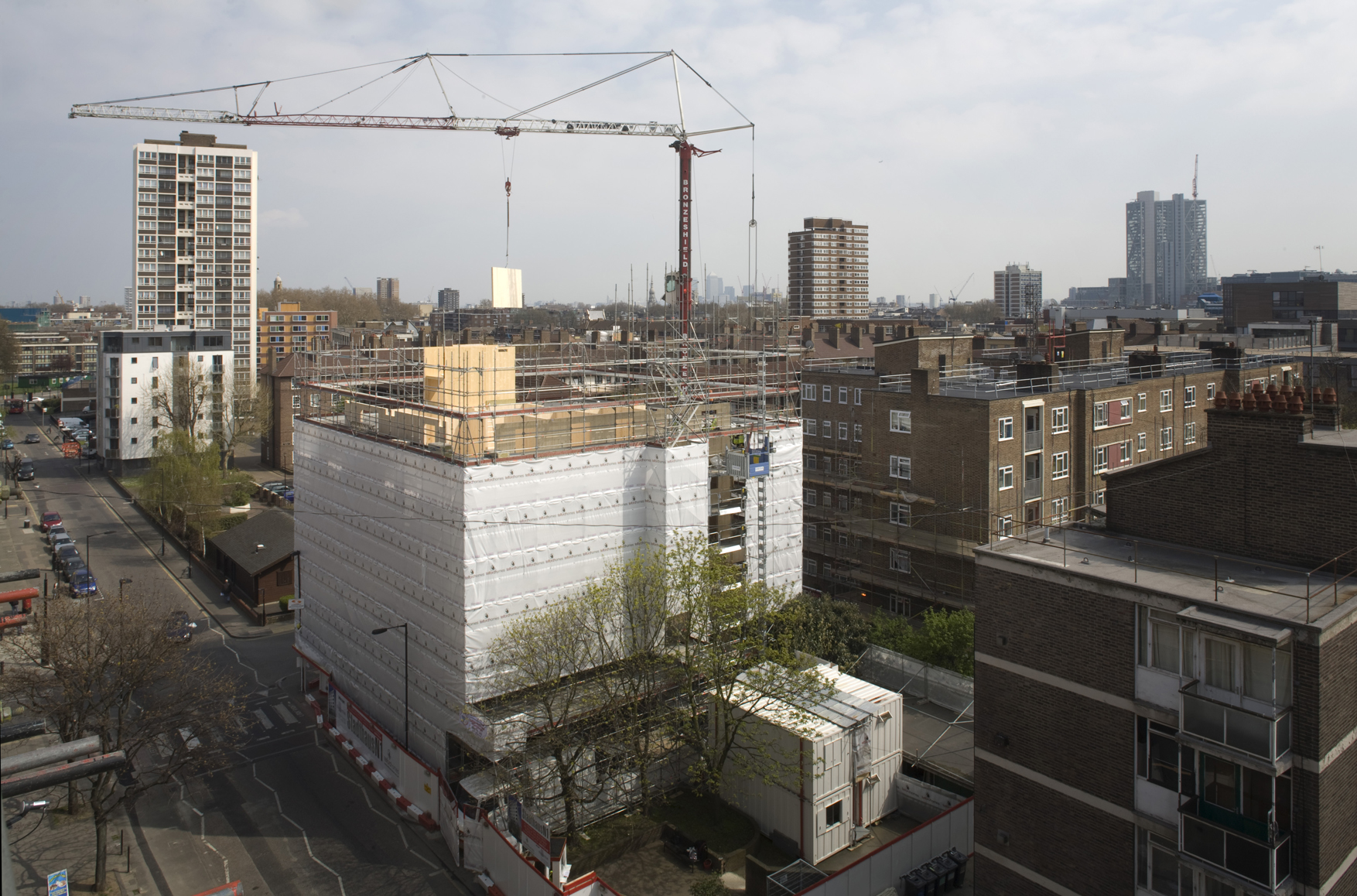 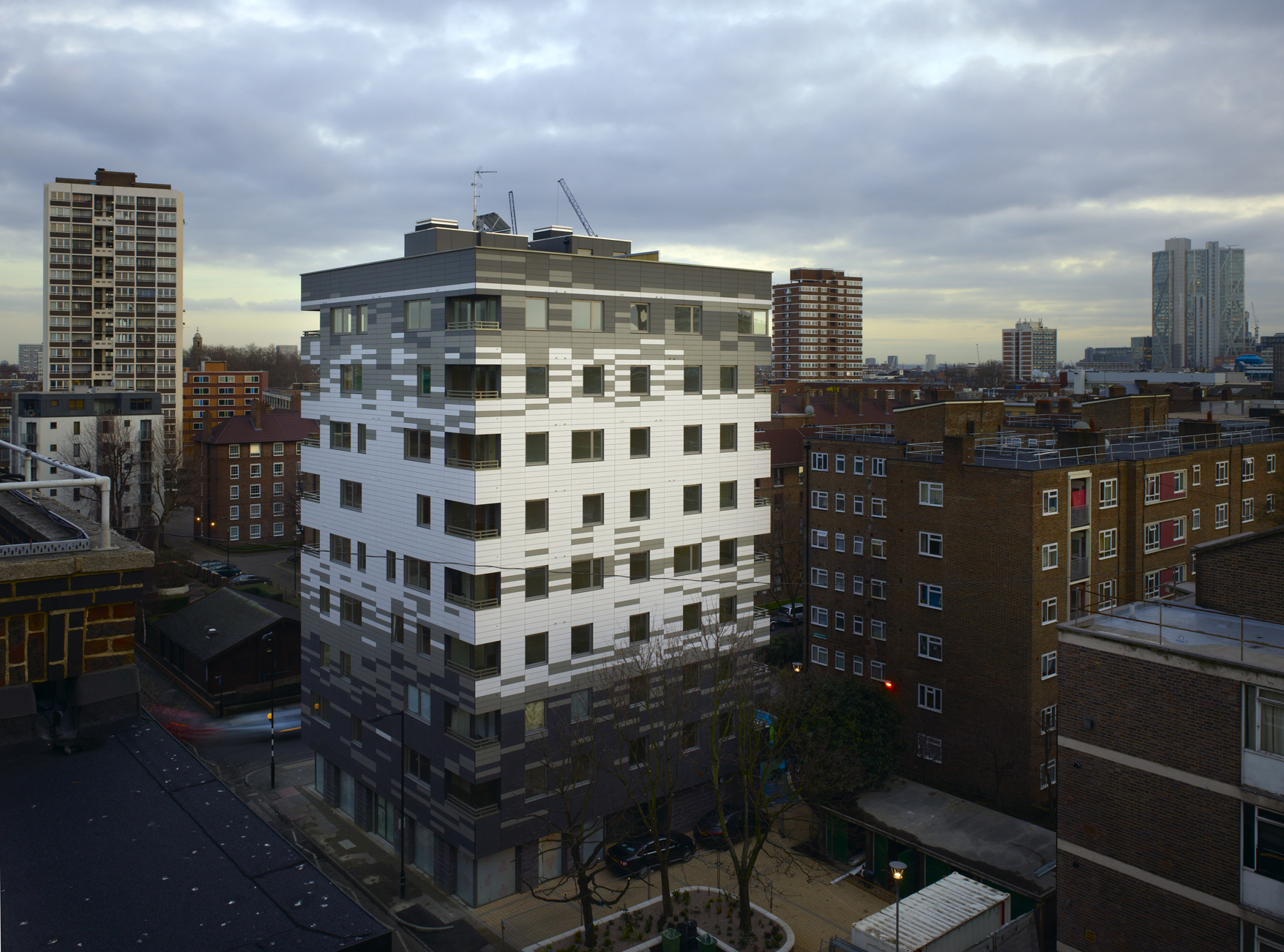 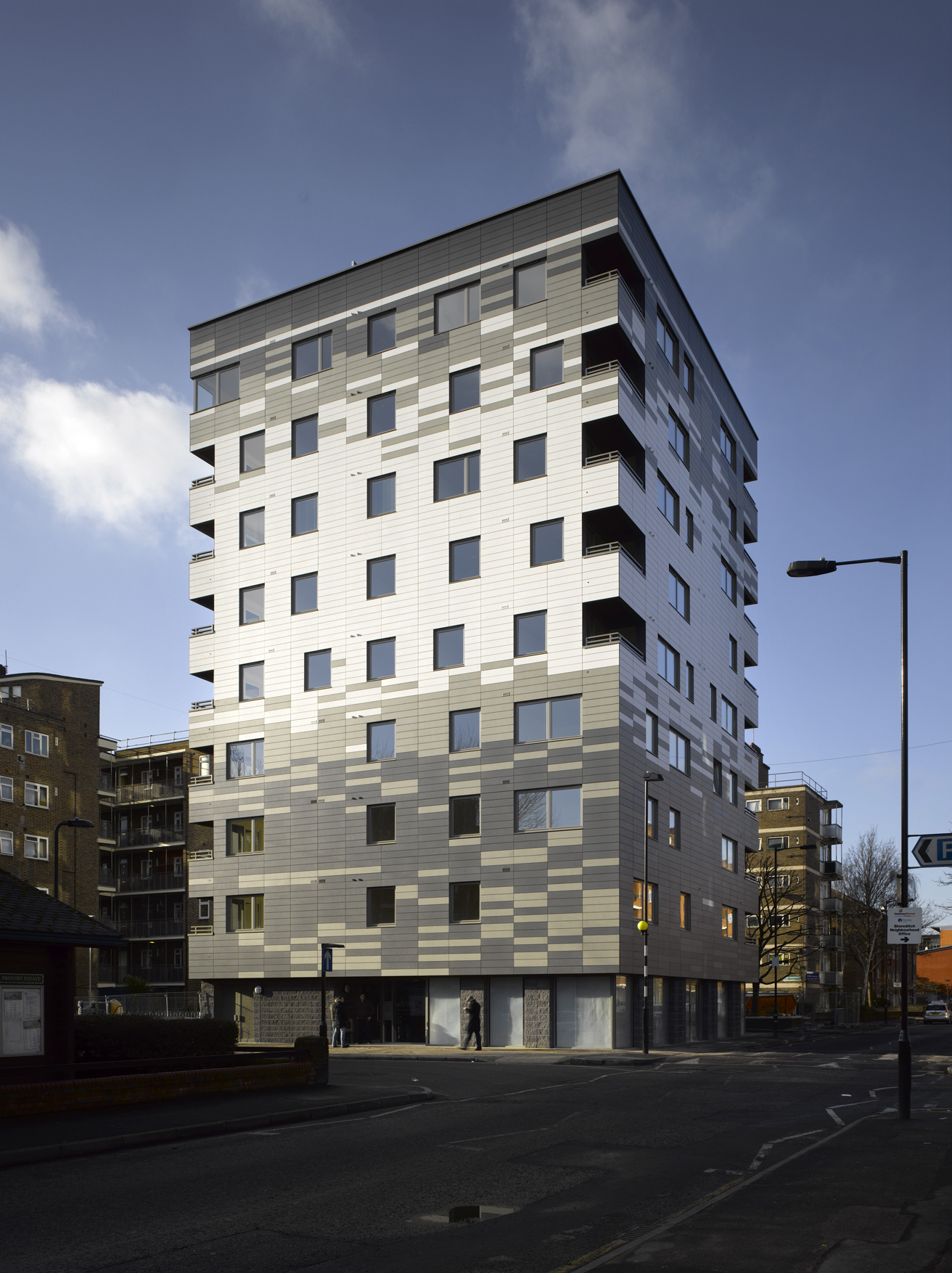 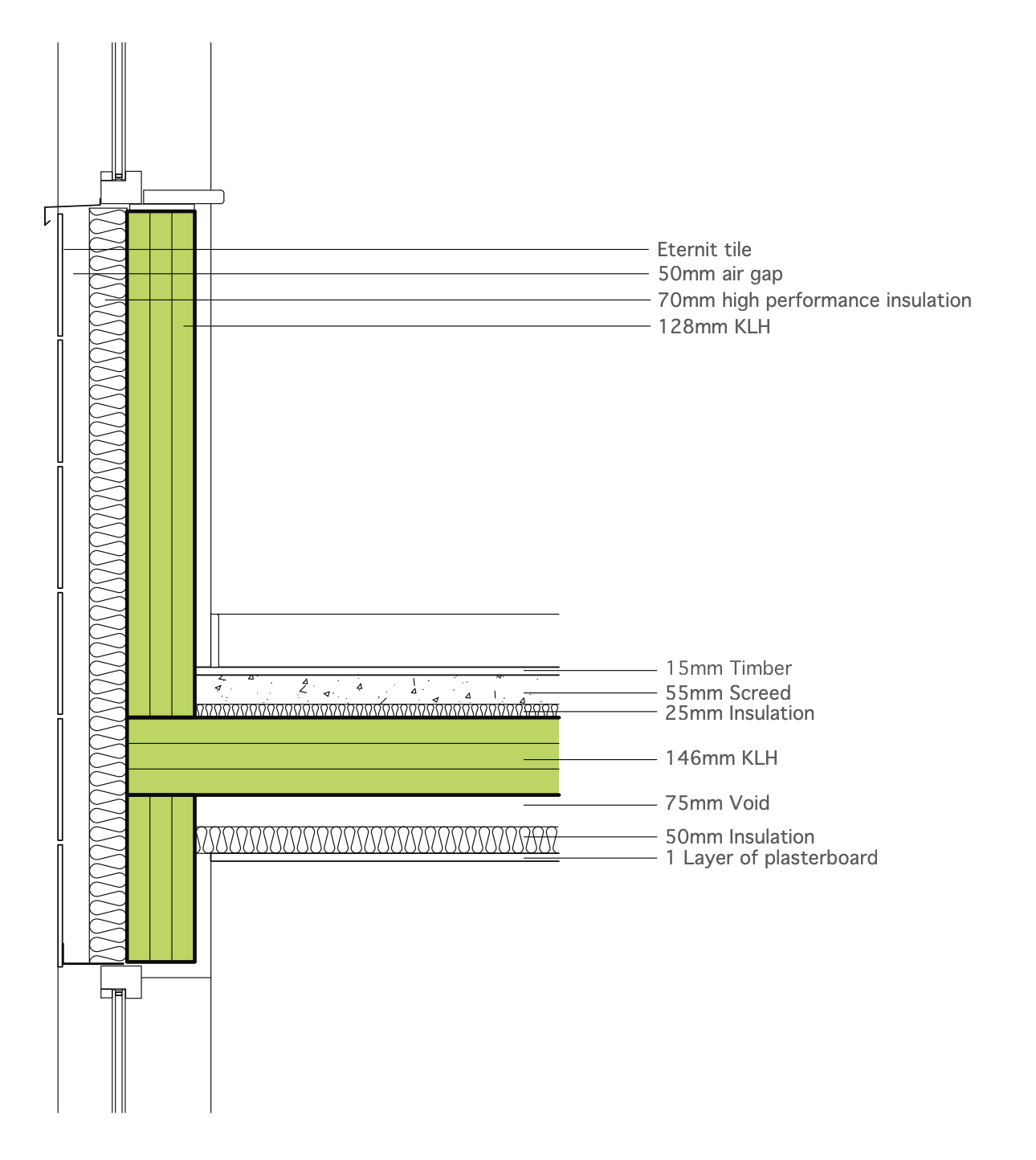 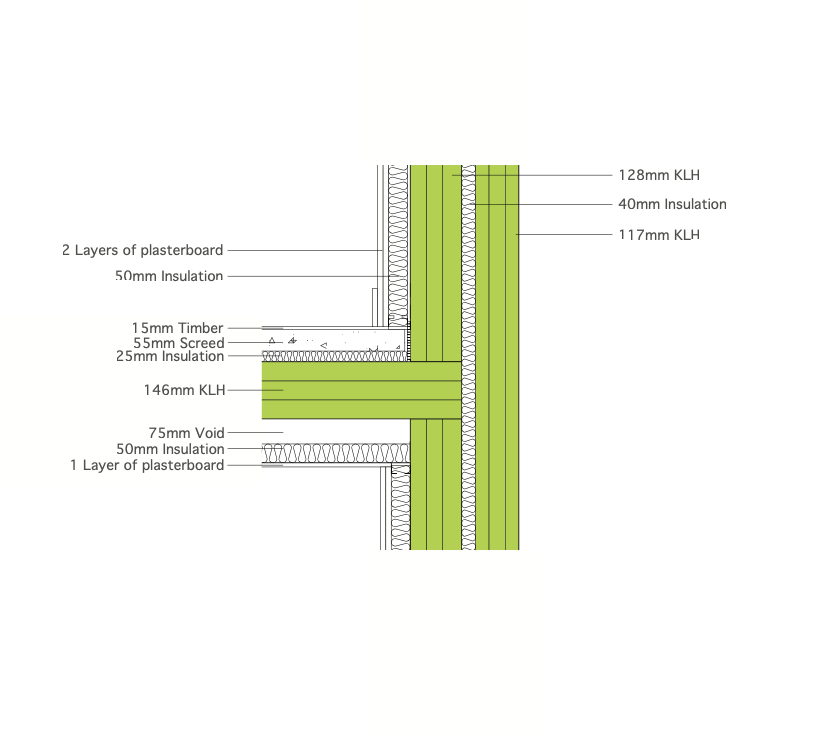 Stadthaus, Waugh Thistleton’s nine-storey residential building in London, is thought to be the tallest timber residential structure in the world. It is the first building in the world of this height to construct not only load-bearing walls and floor slabs but also stair and lift cores entirely from timber.

The form of the design was predetermined by the site area of 17m x 17m, bound on all sides by other residential buildings. An extrusion of the site area set the building’s plan form, with the height set at nine storeys by the local planning authority. The client requested a separate ground floor entrance for the affordable units, resulting in a mirrored floor plan from east to west, with an identical entrance to each aspect. Both tenures are served by an individual staircase and lift. The five upper storeys are designated for private sale and the three lower storeys for social housing. The majority of social housing is made up of family apartments, which overlook the play area to the rear of the building.

The building was assembled using a structural cross-laminated timber panel system produced in Austria by KLH. Each panel is prefabricated including cutouts for windows and doors and routed service channels. As the panels arrived on site they were immediately craned into position. Four carpenters assembled the eight-storey structure in twenty-seven days. The speed of the construction coupled with the lack of noise and waste created far less intrusion on the local community than a traditional concrete frame construction.

Designing a building constructed from load-bearing panels creates a number of opportunities. Any internal wall can become a party wall, allowing for different plan types and an animated façade where windows were placed according to the best advantage. Traditional trades followed on once the structure of each floor was complete. The ease of the build resulted in the building being delivered in 49 weeks – estimated to be a saving of five months over a notional concrete frame construction.

Regulations in Europe have meant there are no precedents for Stadthaus. However, architectural and engineering methods in timber construction pioneered by Waugh Thistleton and Techniker are now accepted internationally.