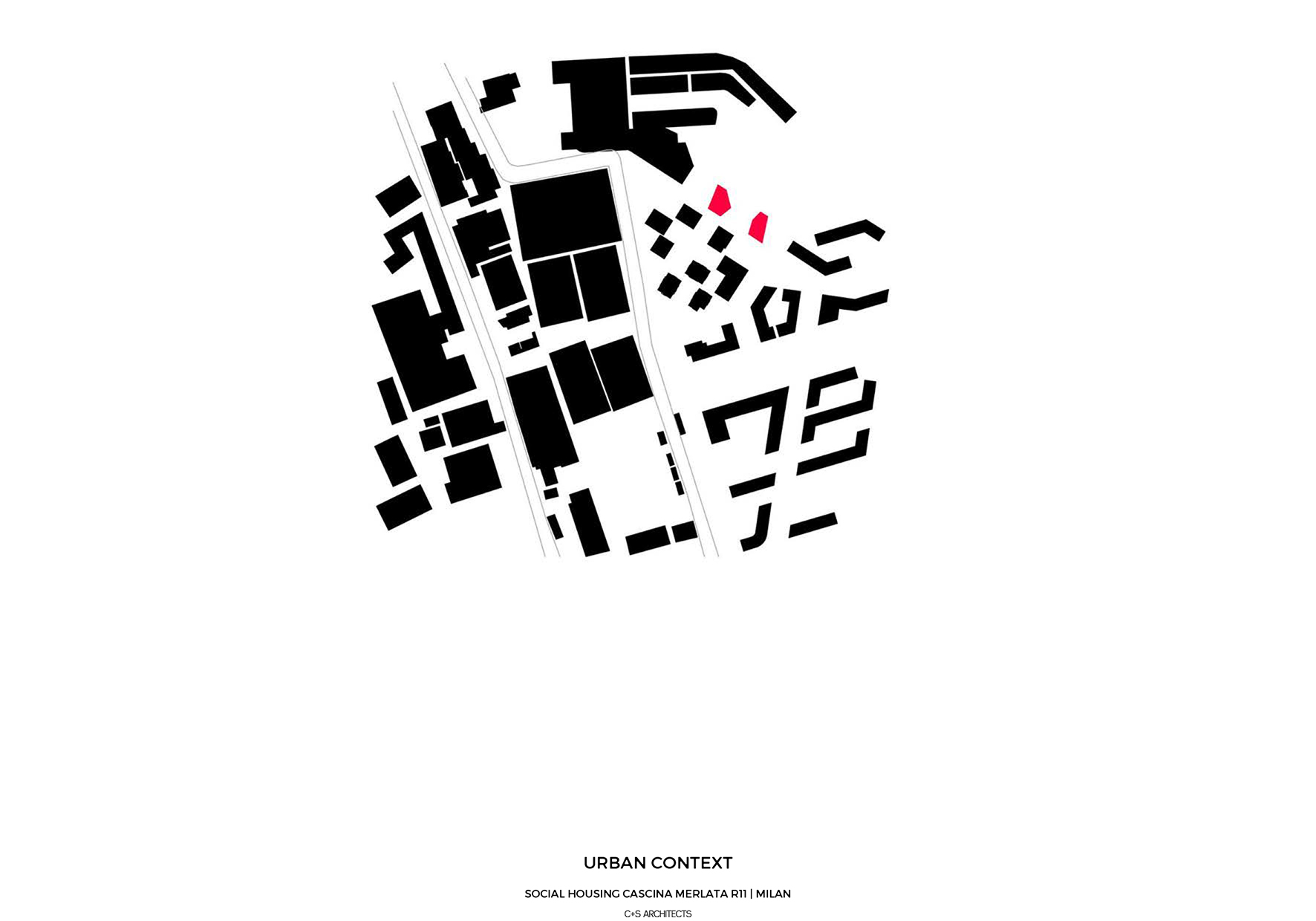 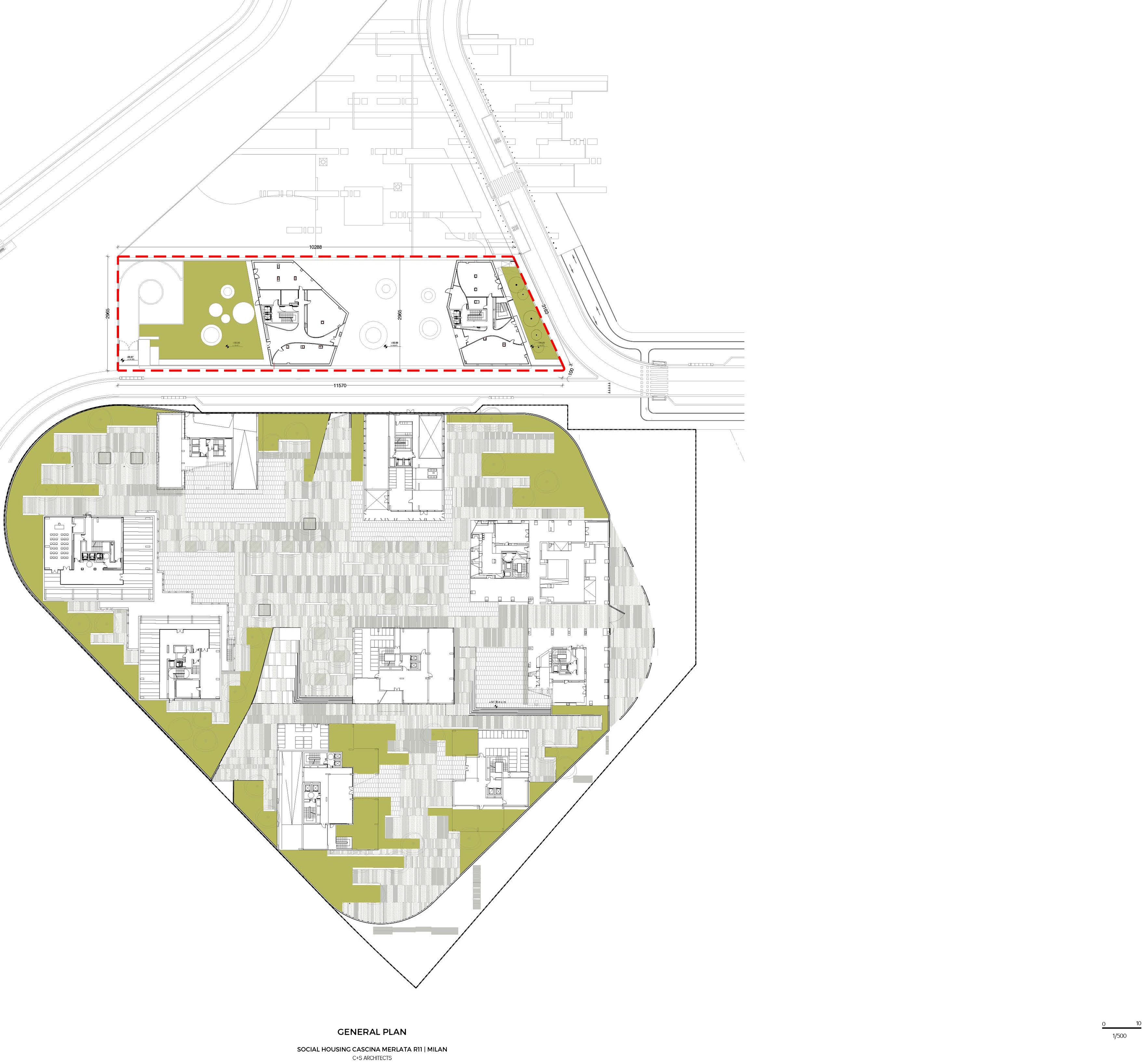 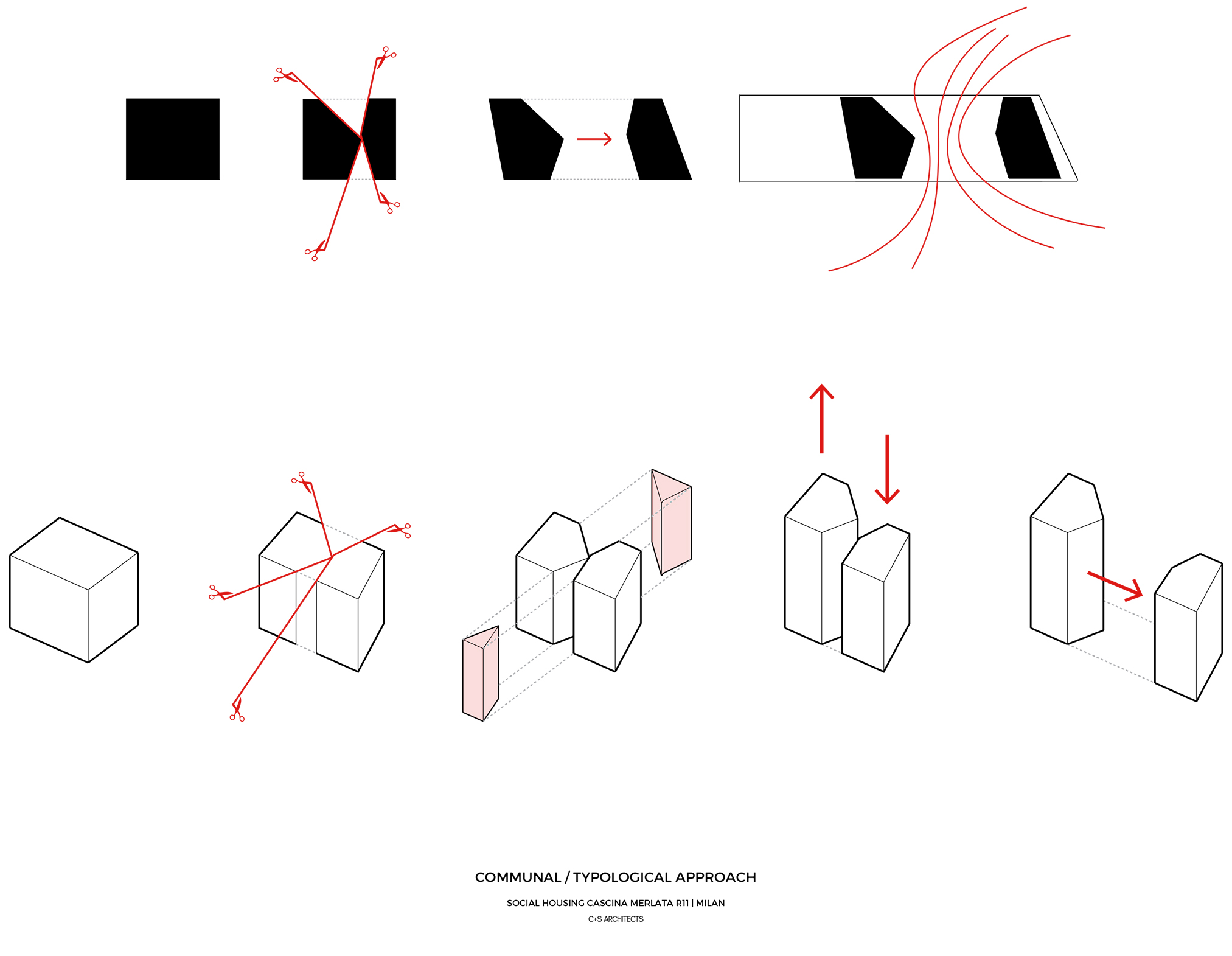 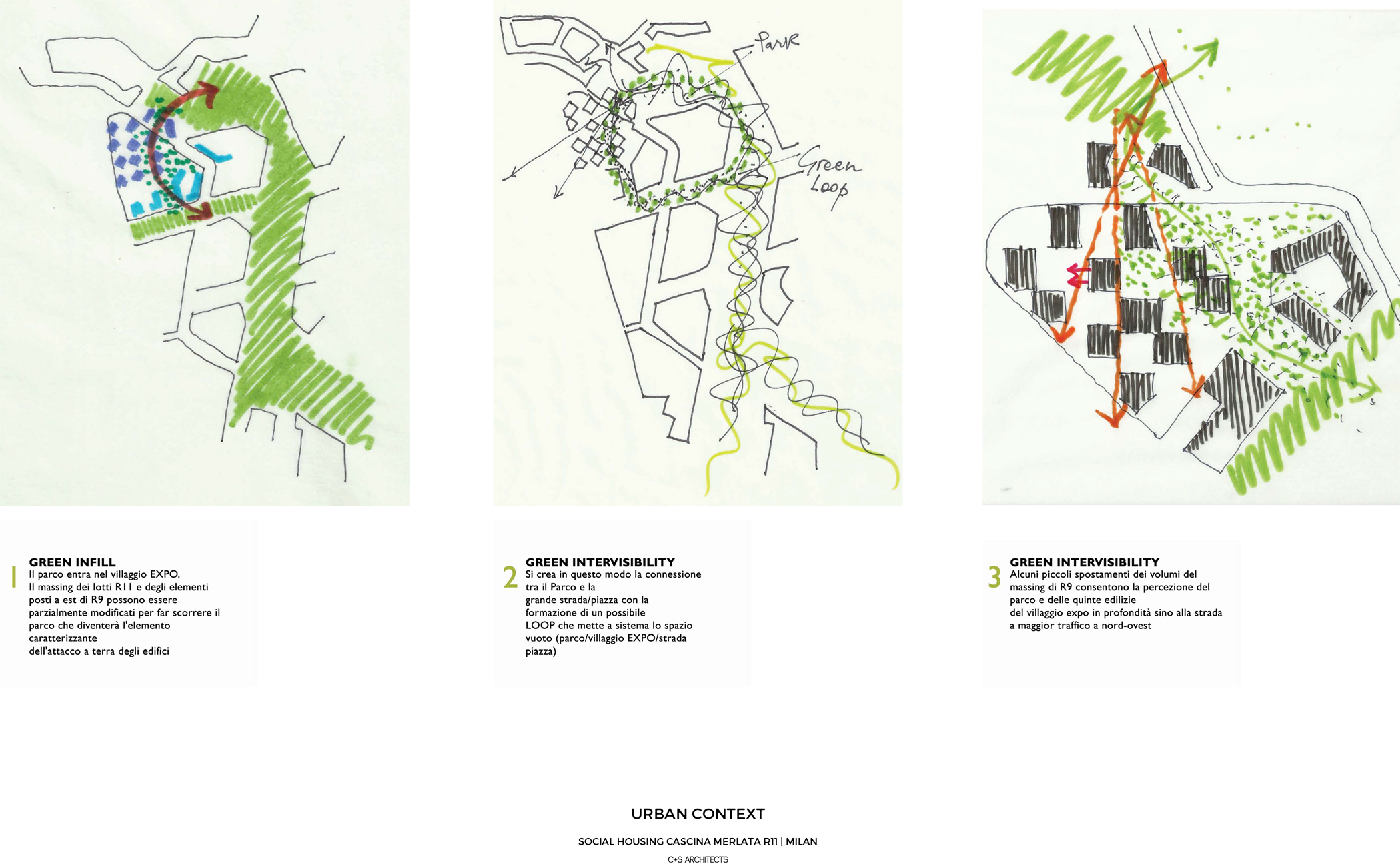 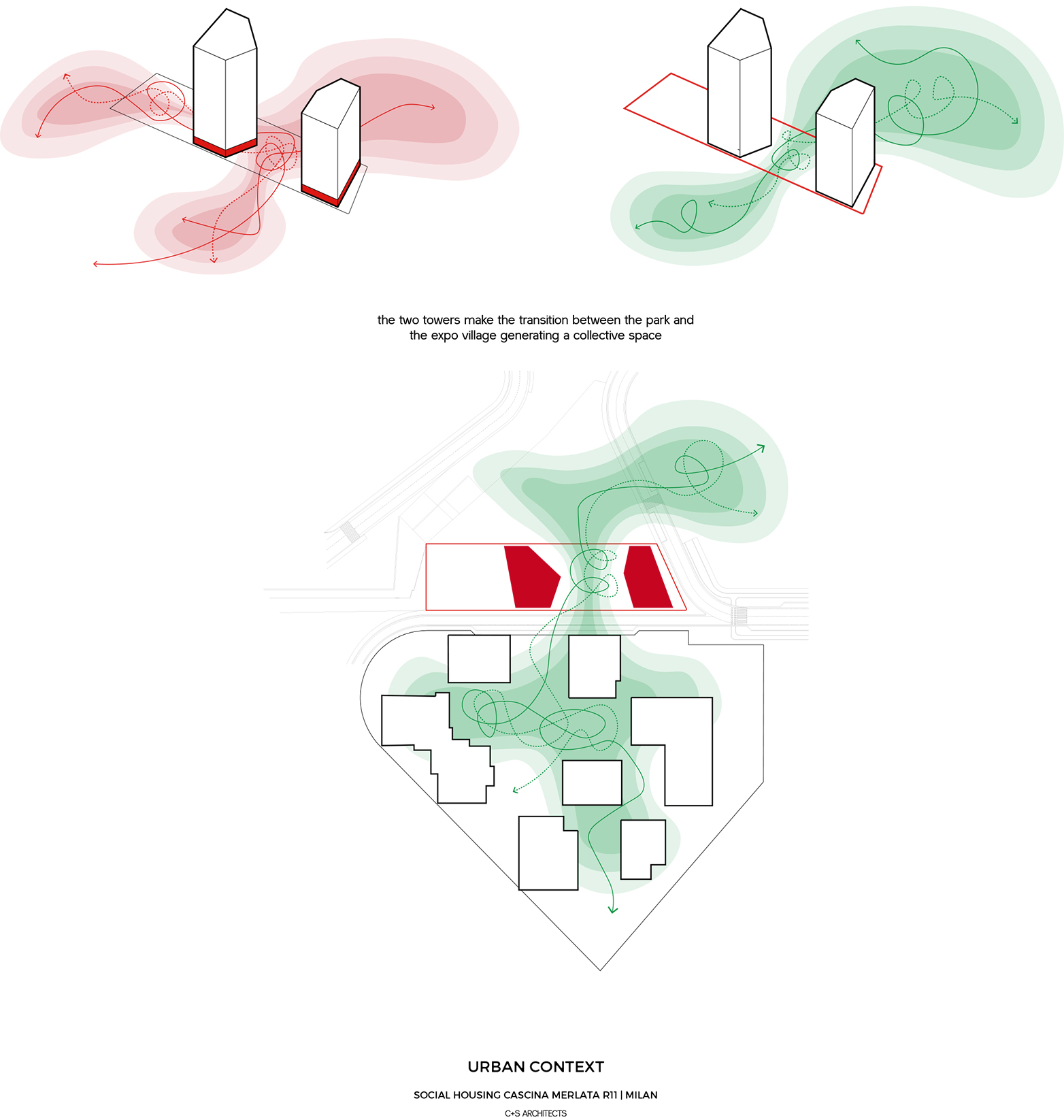 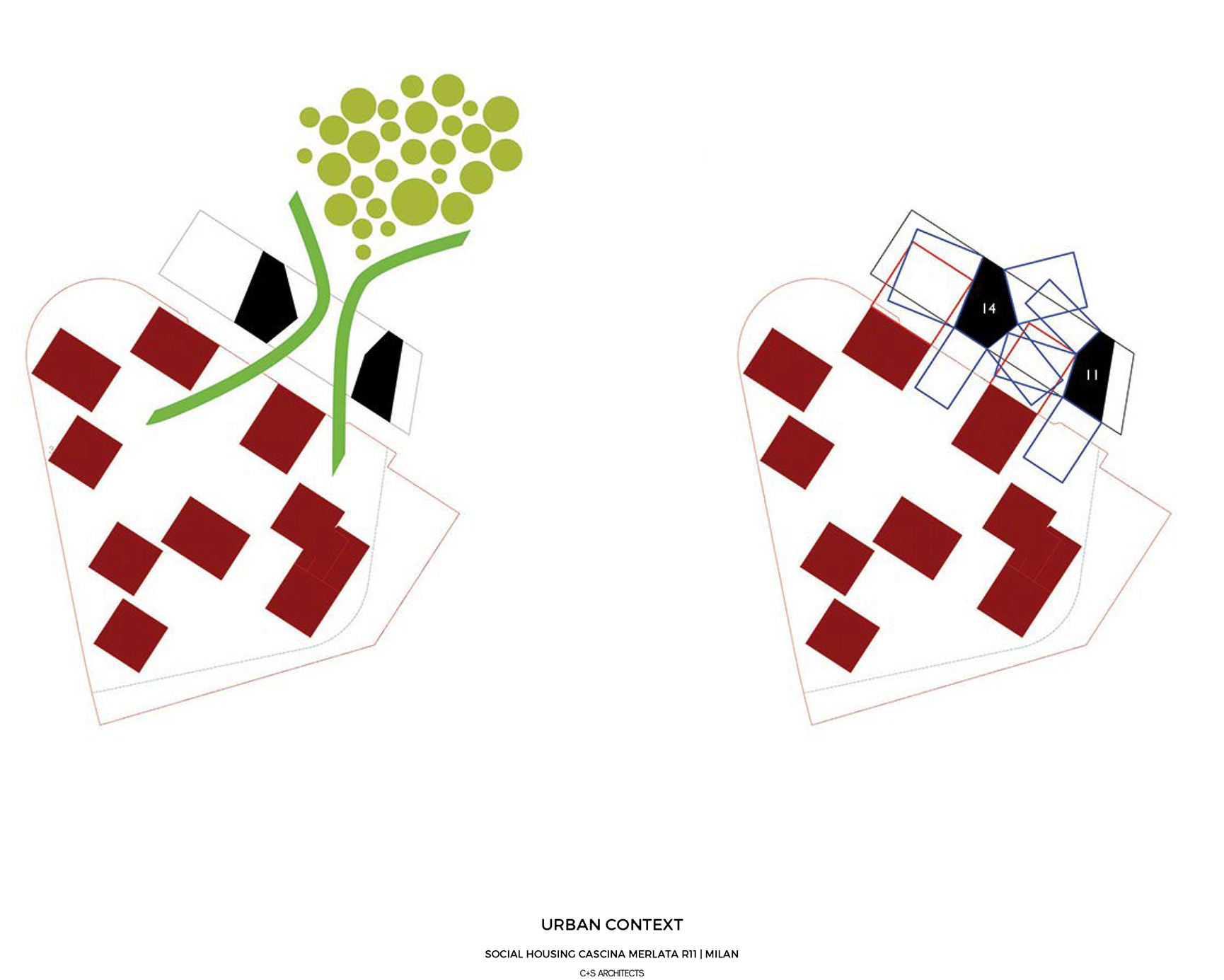 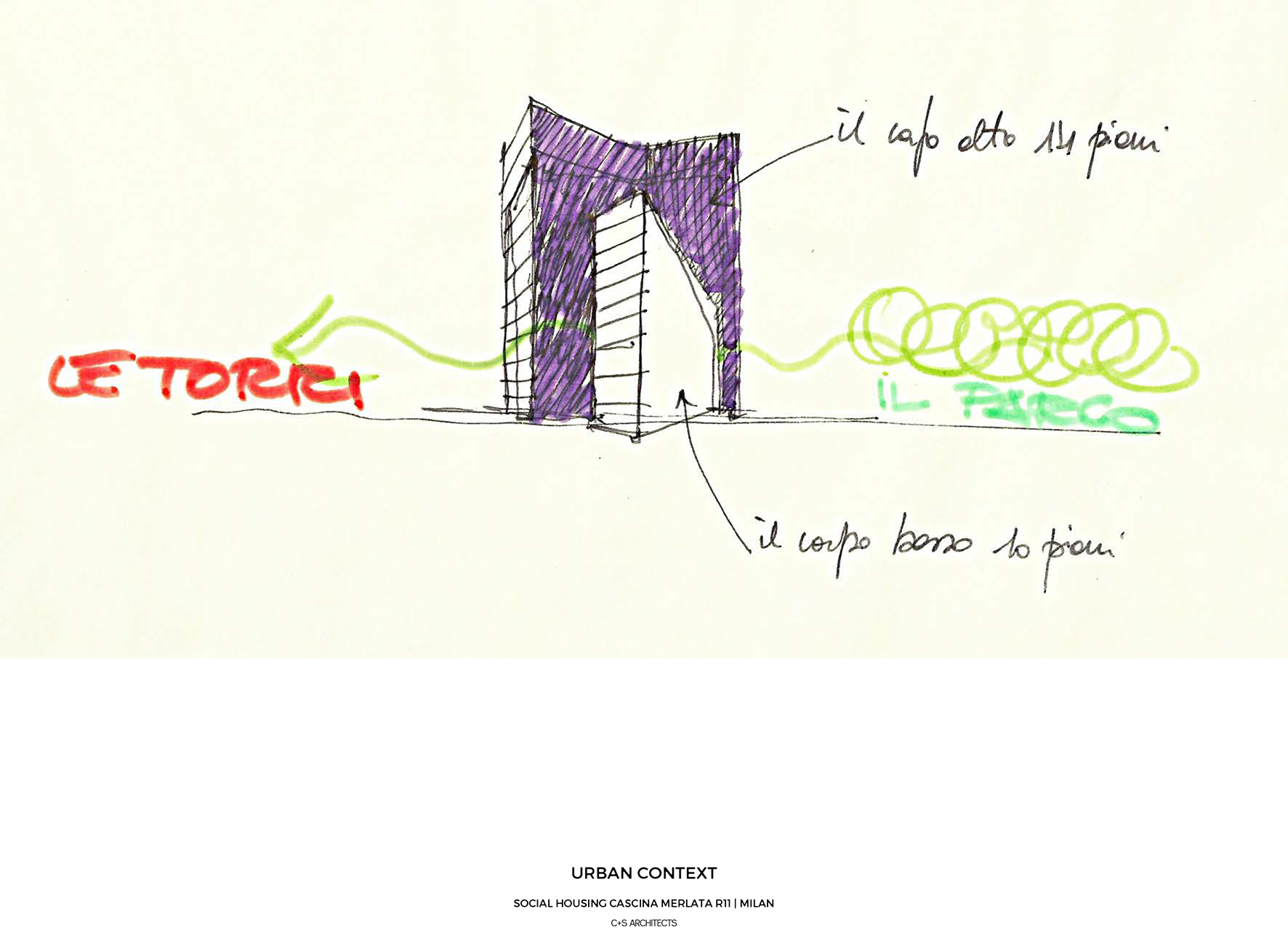 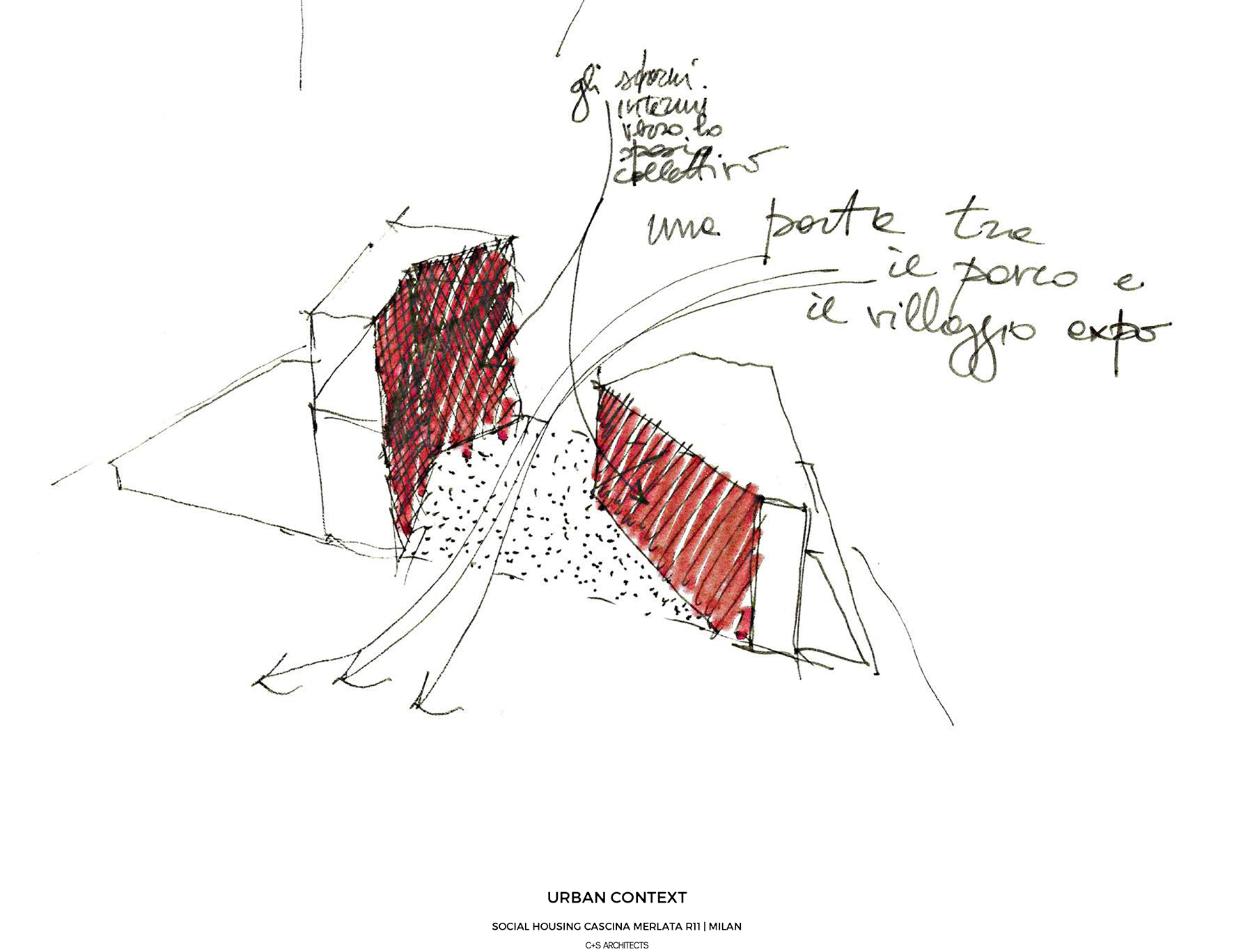 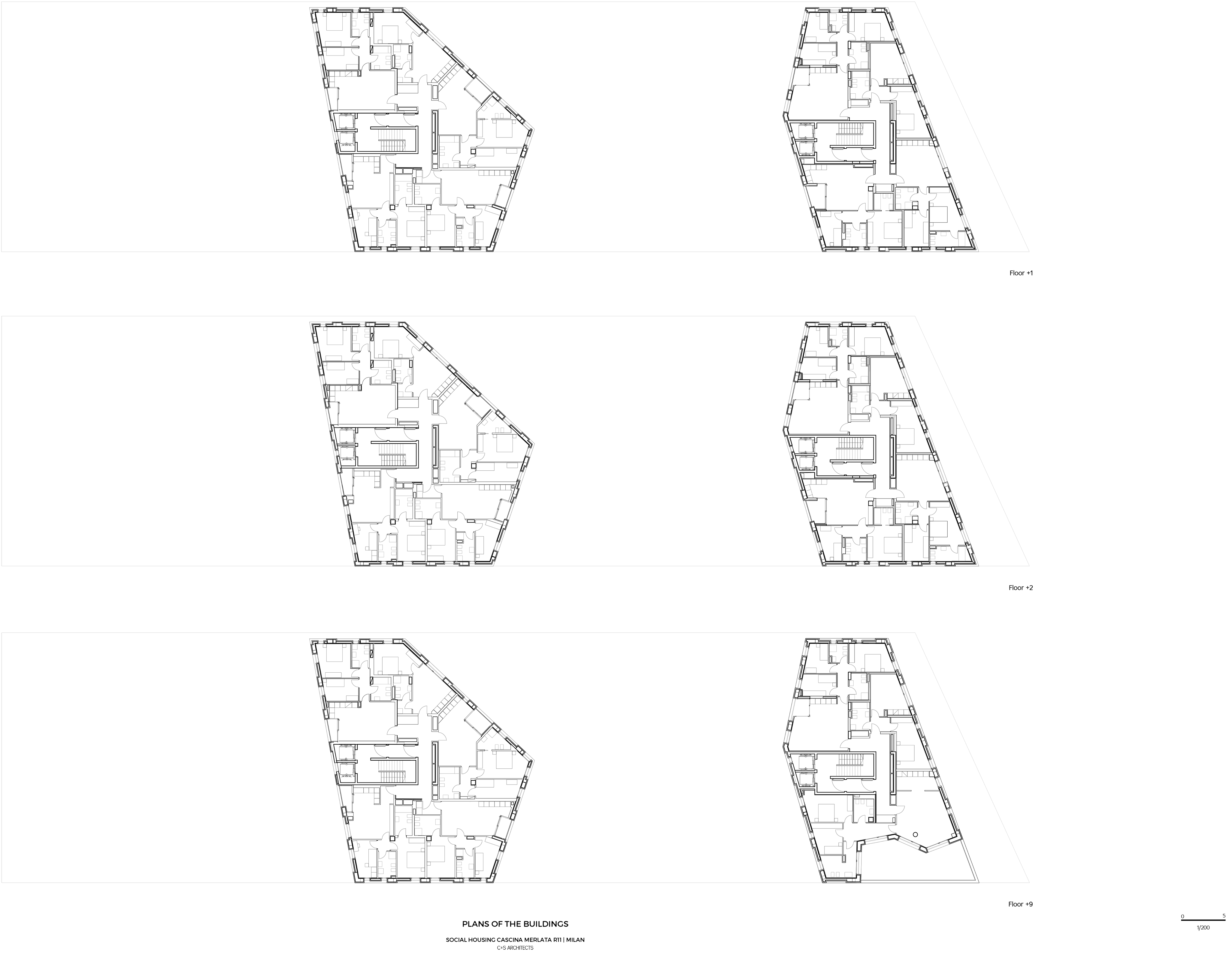 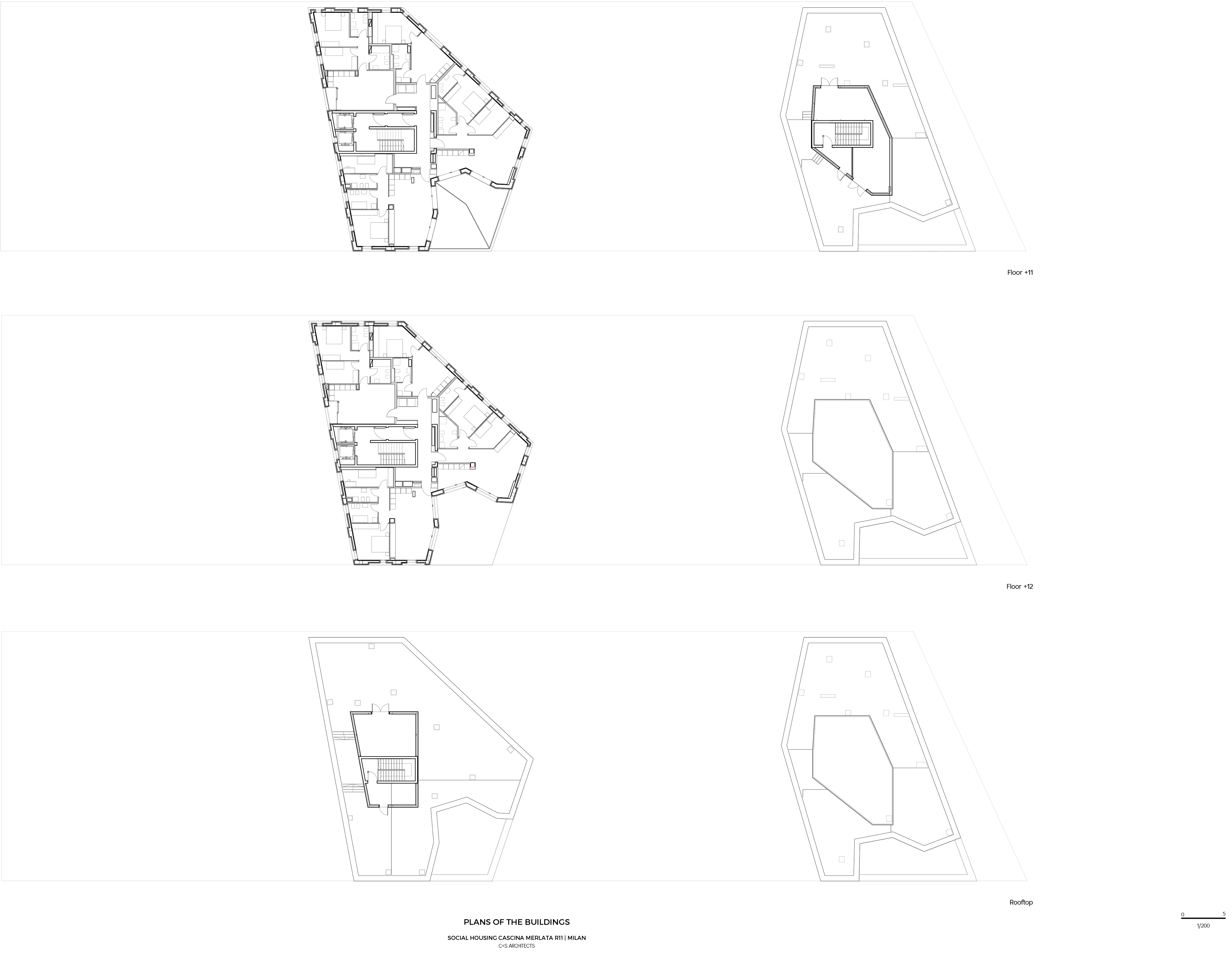 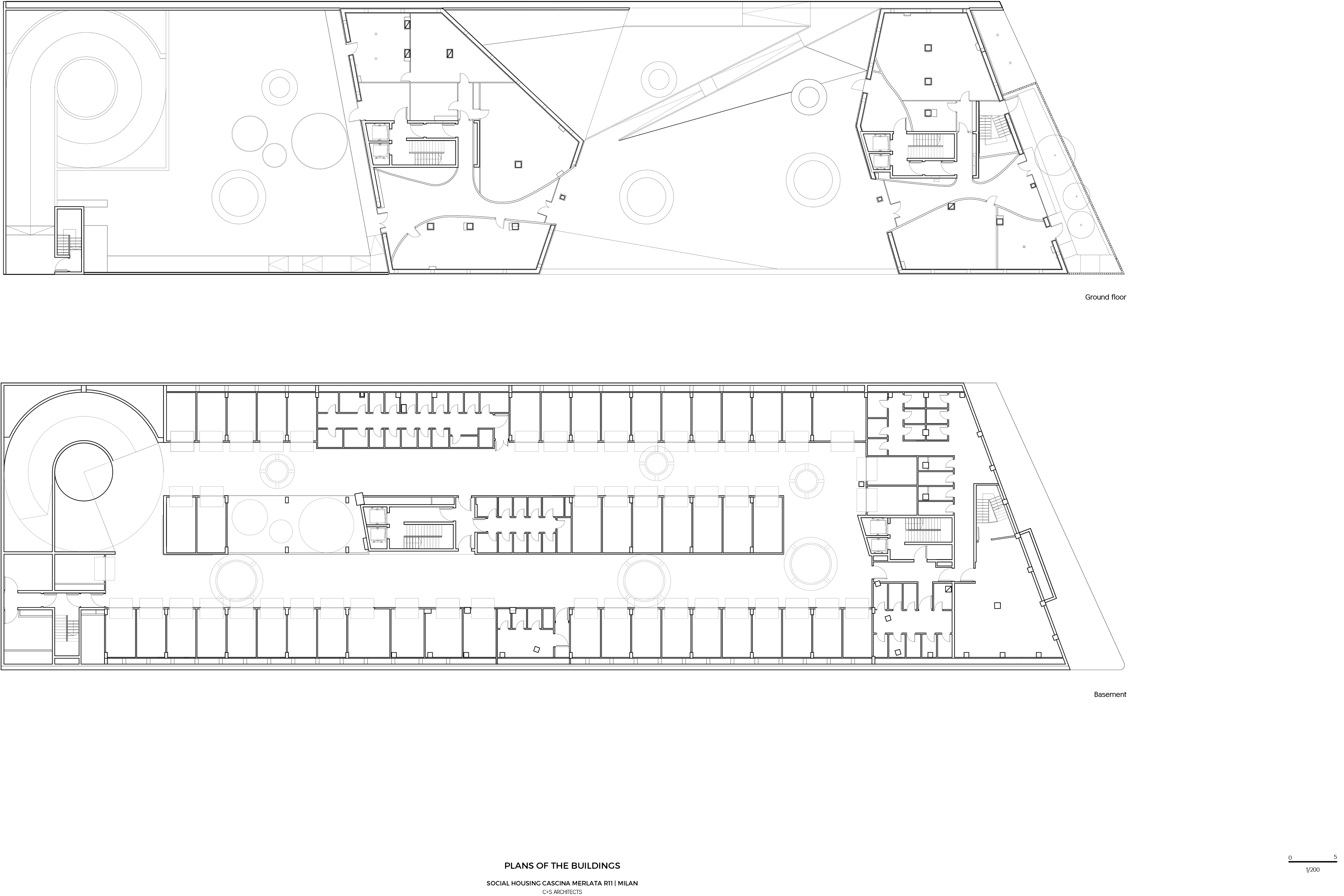 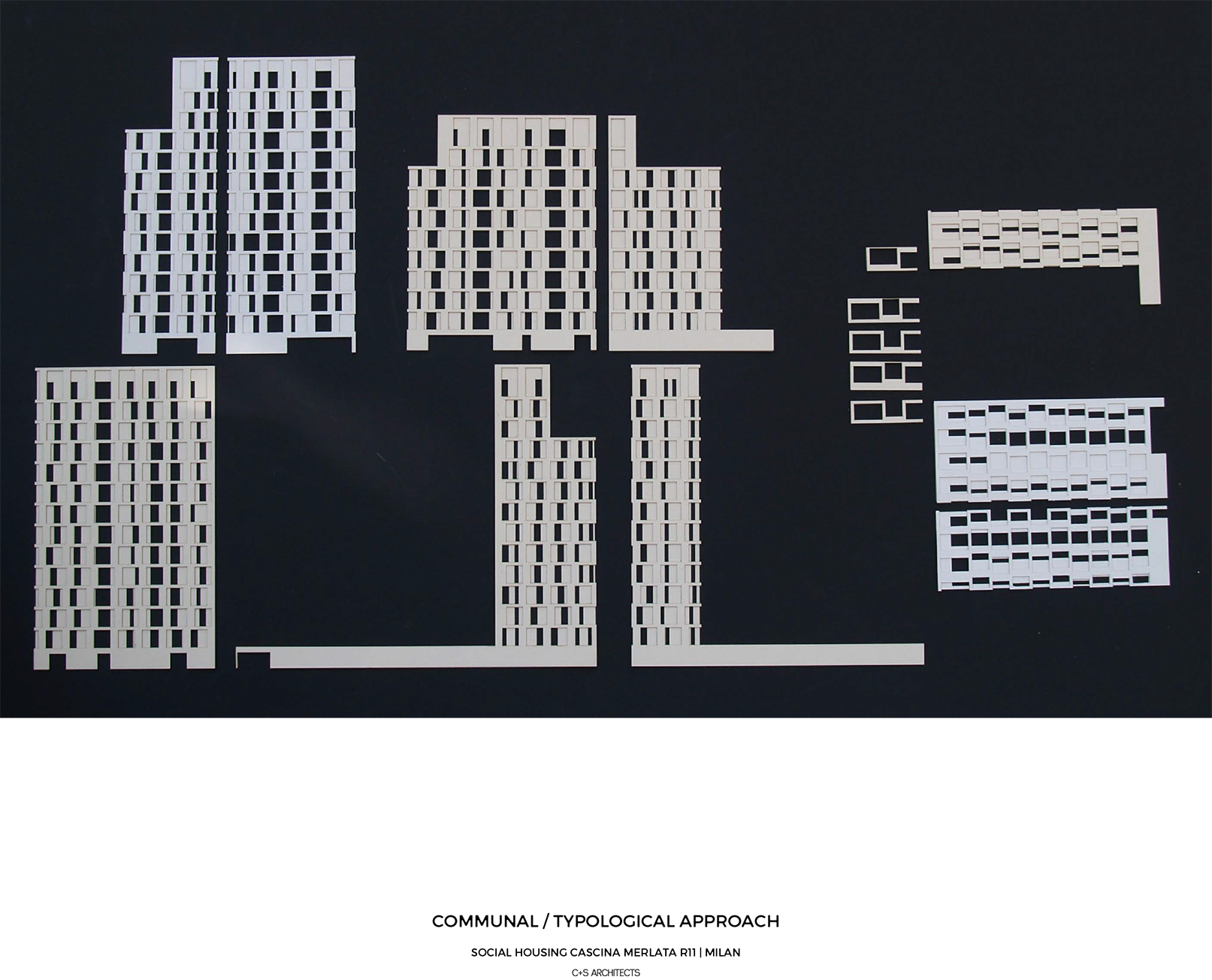 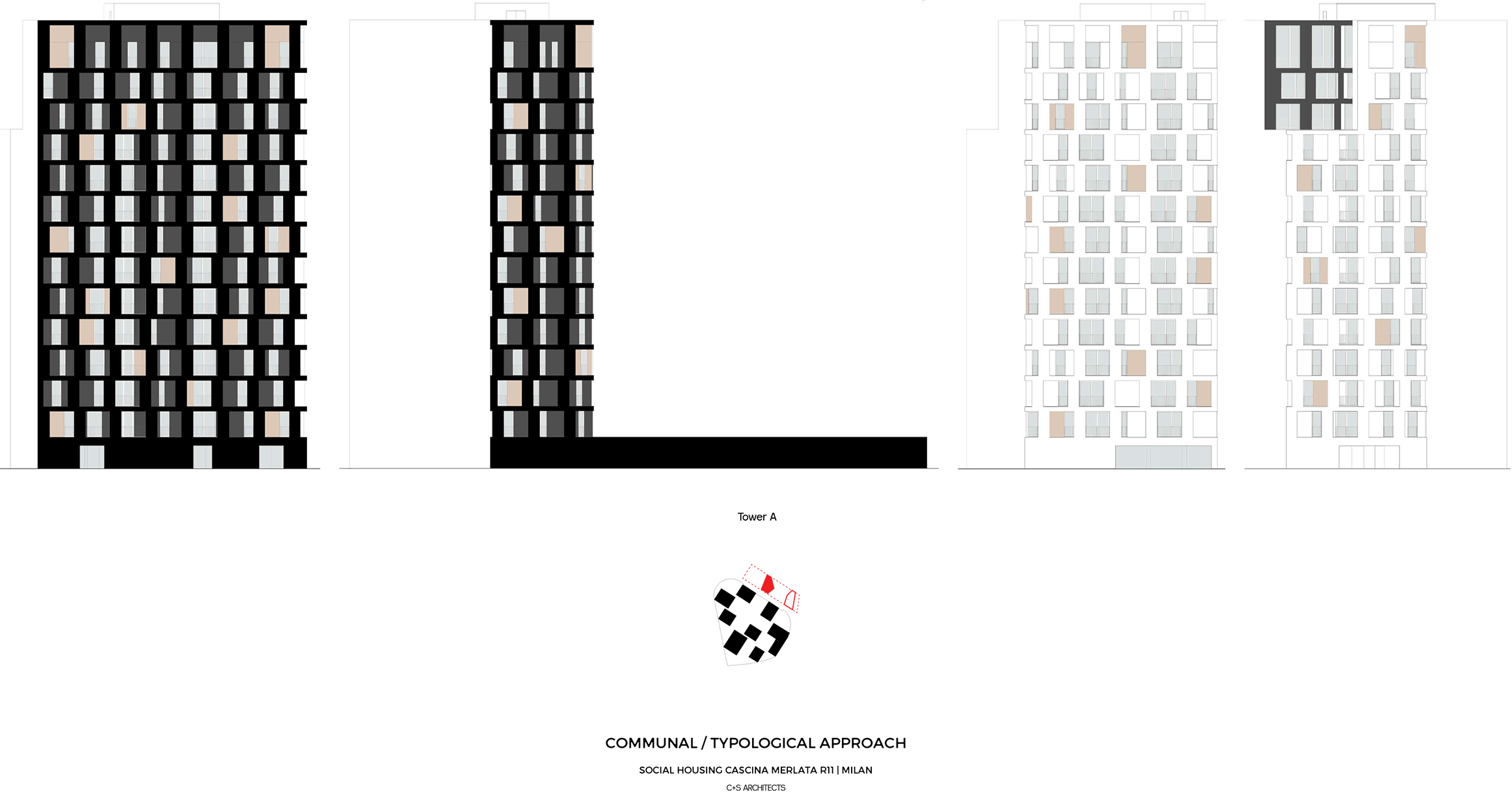 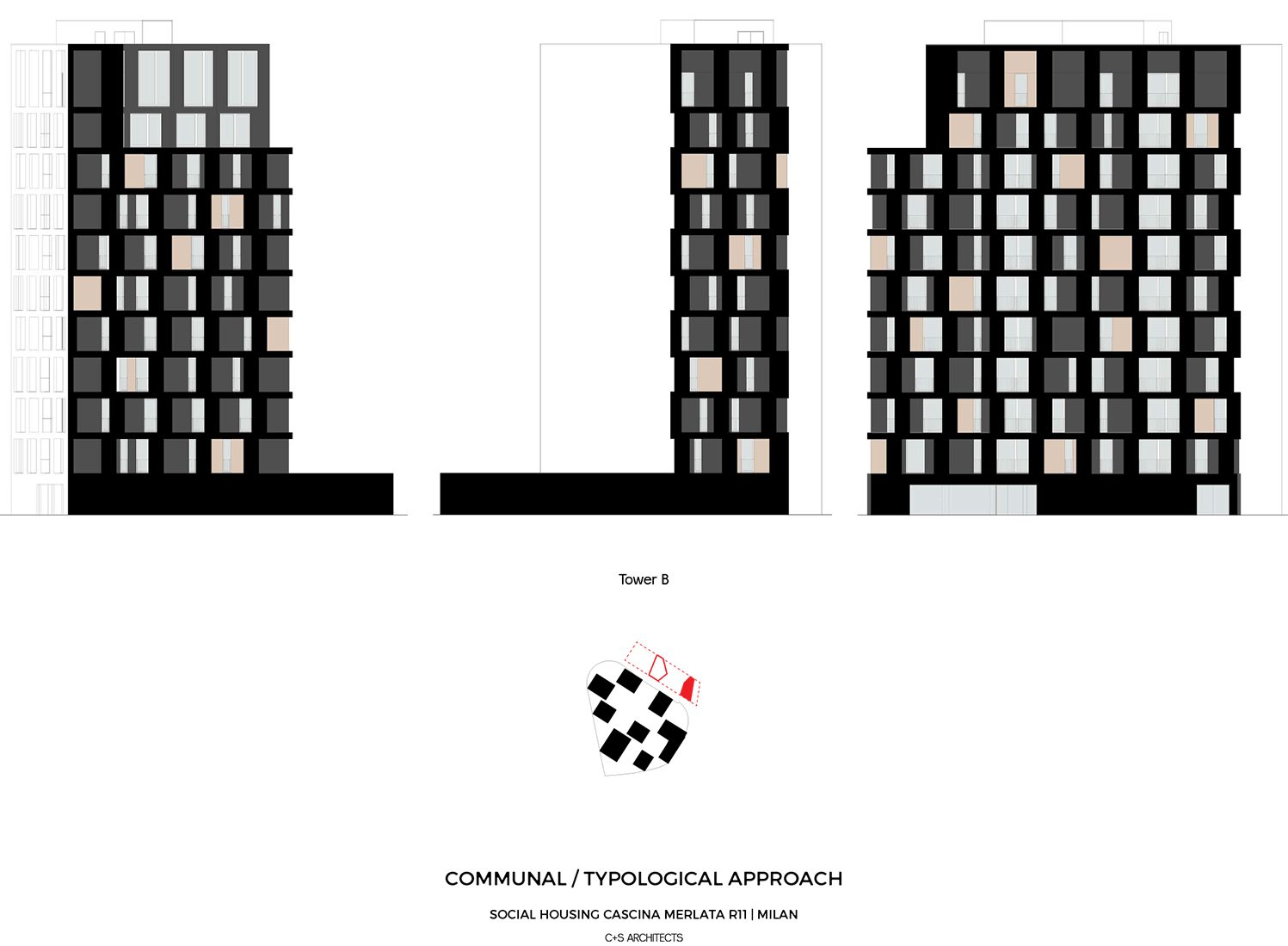 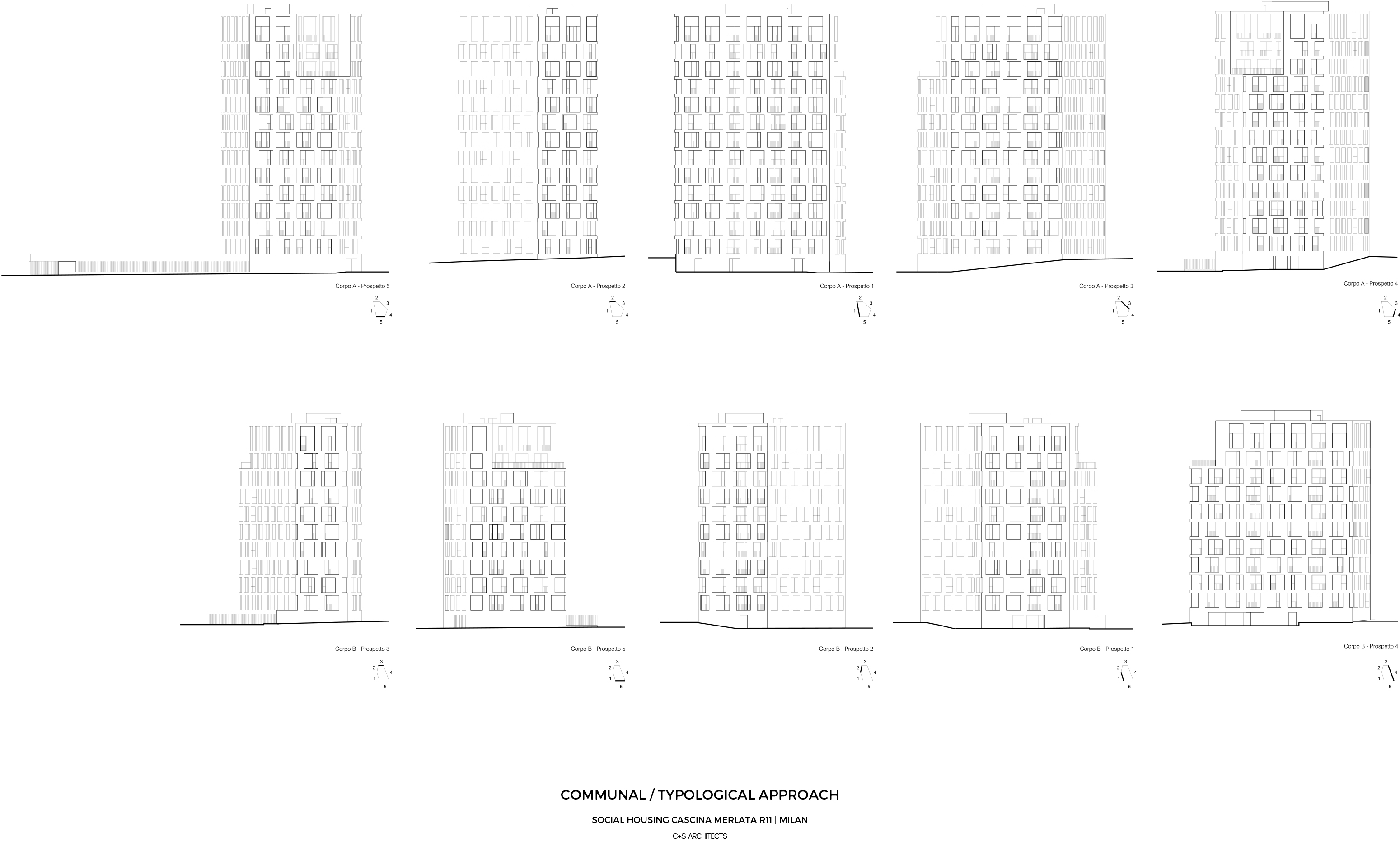 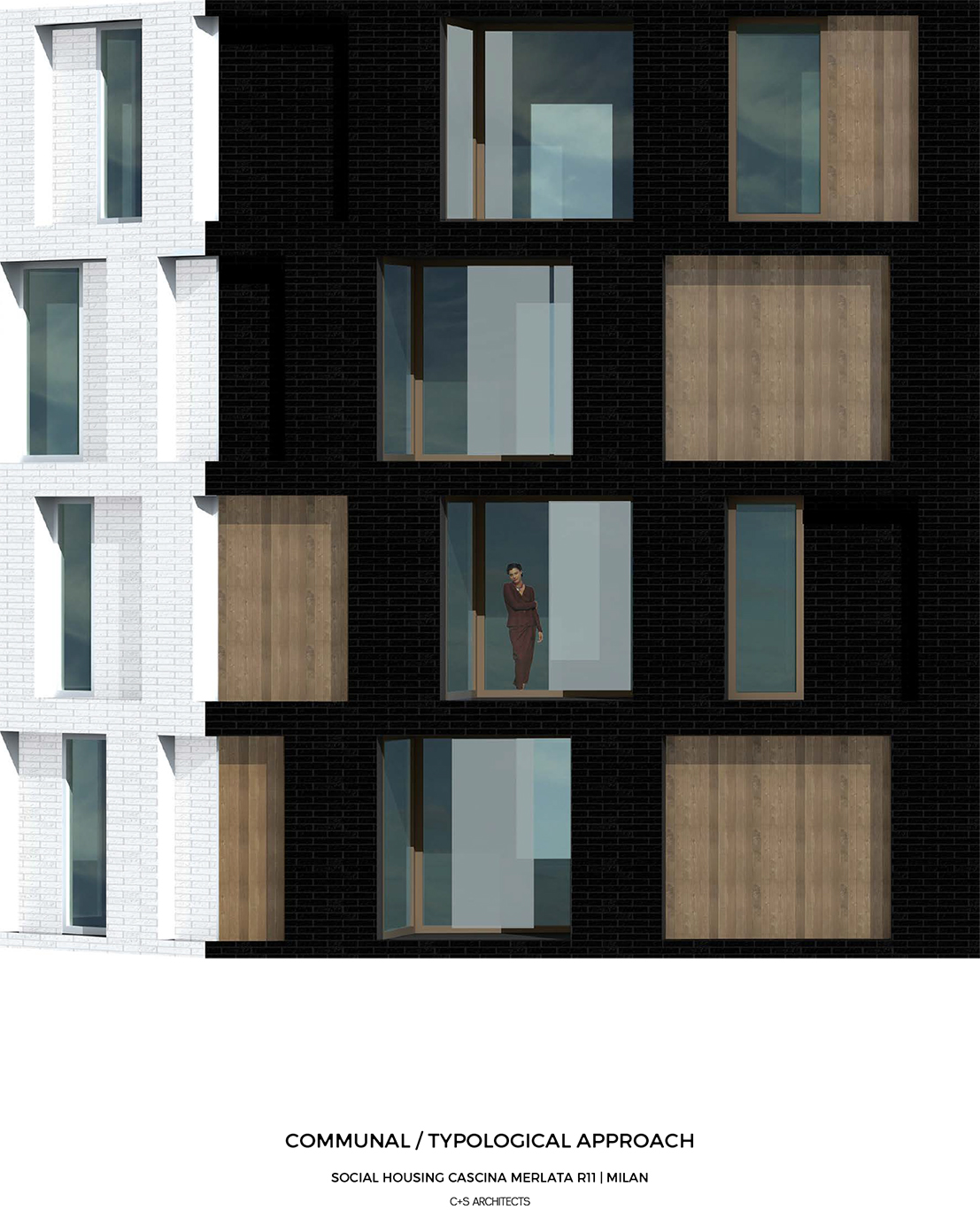 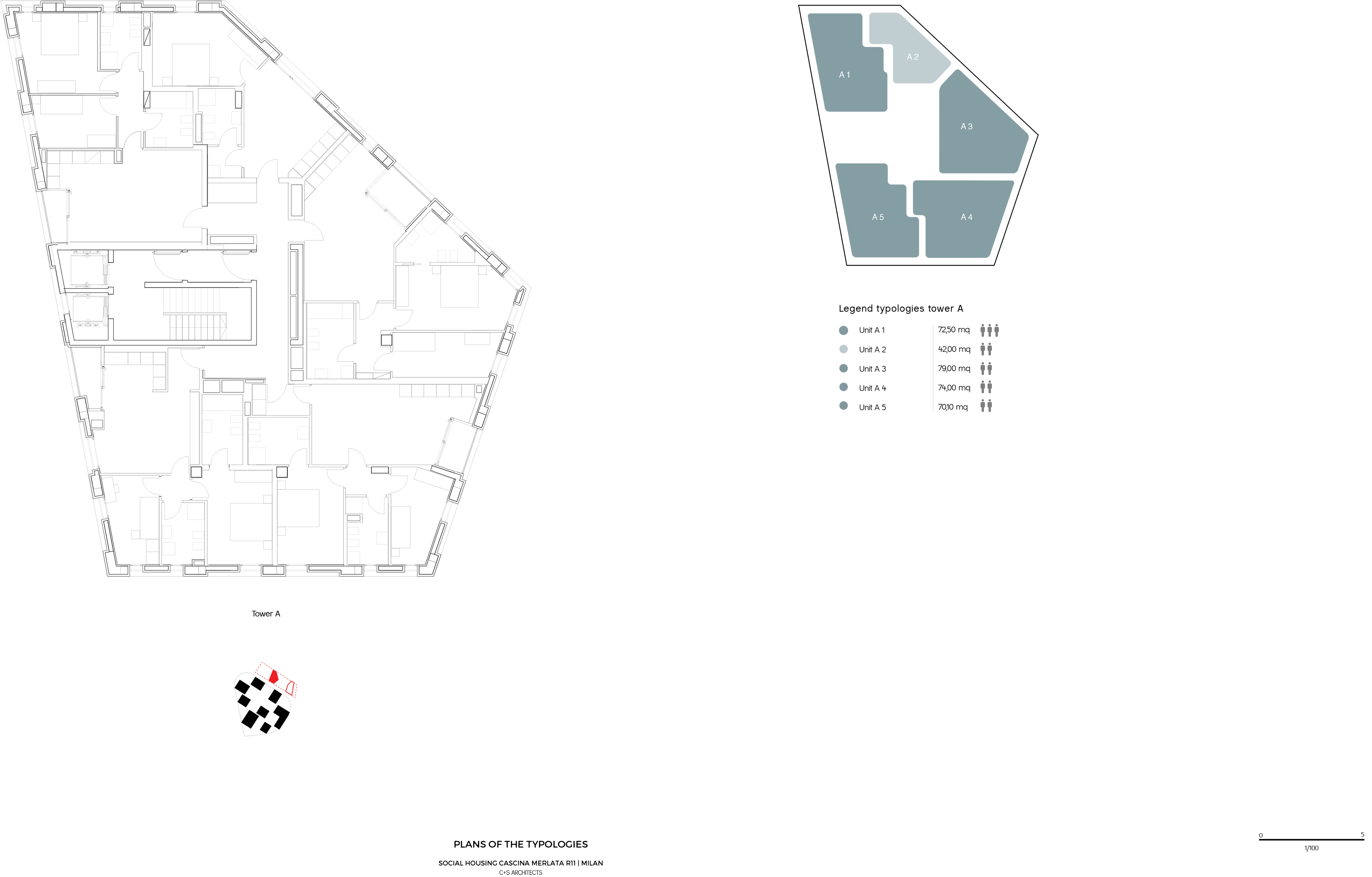 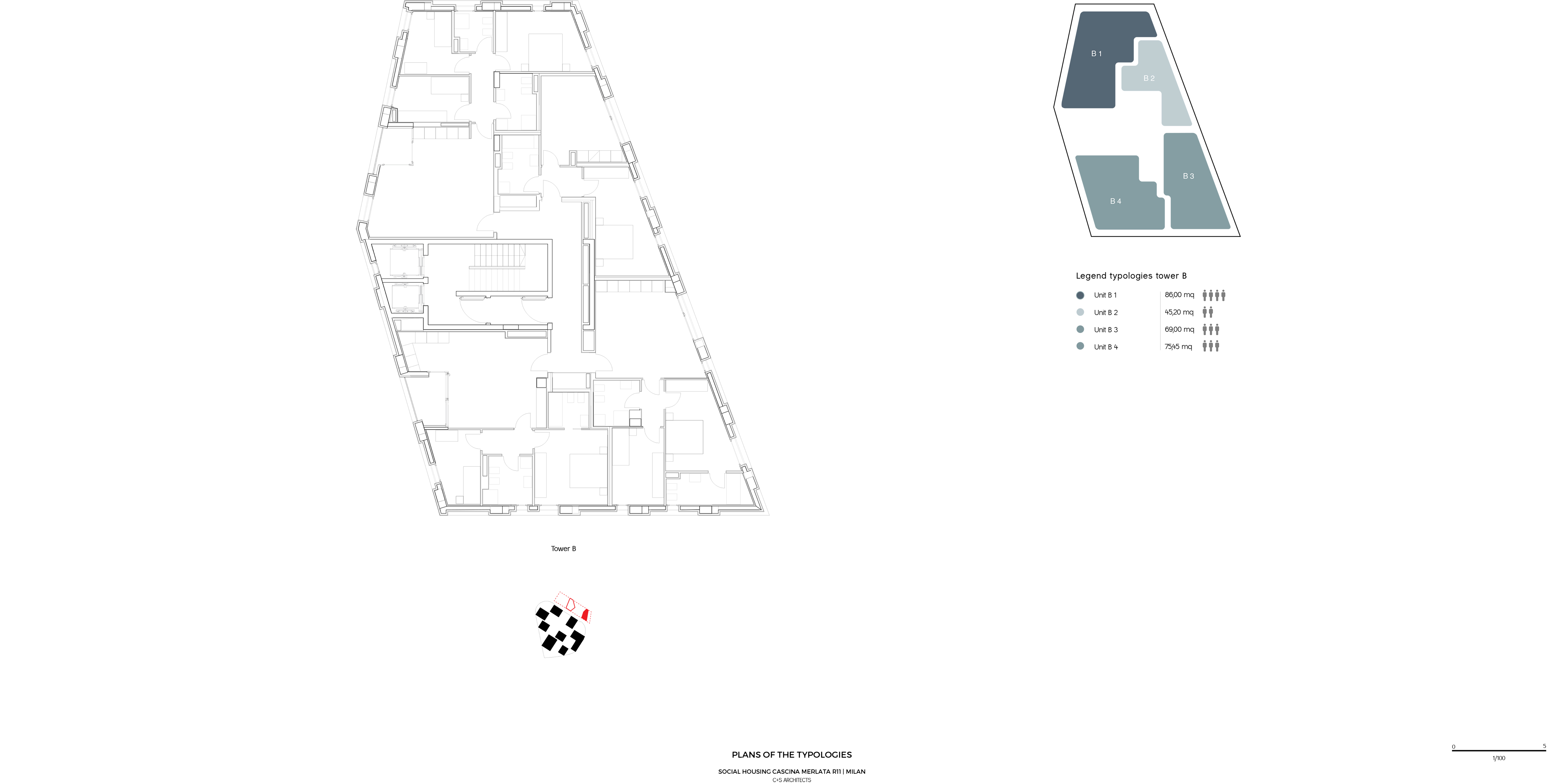 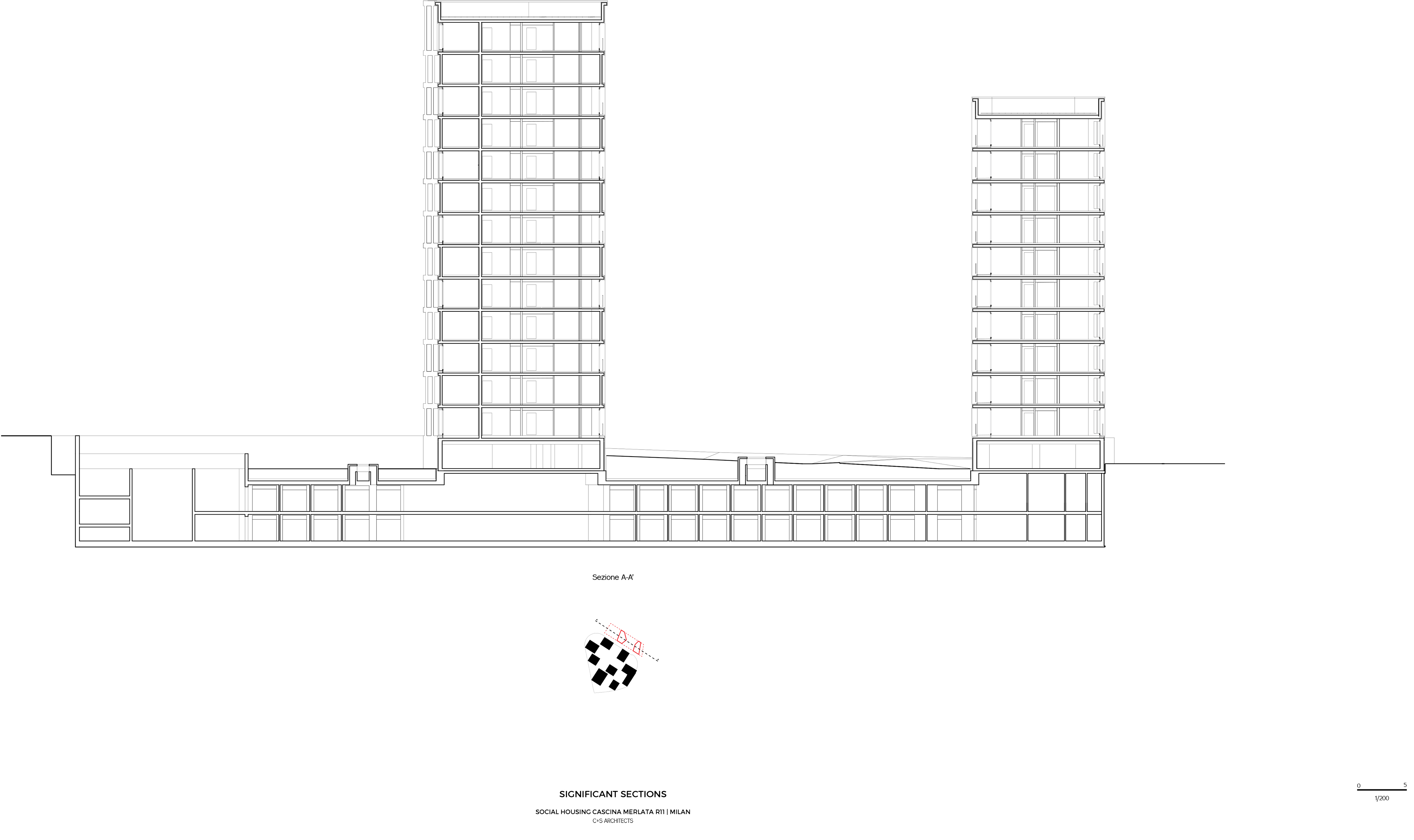 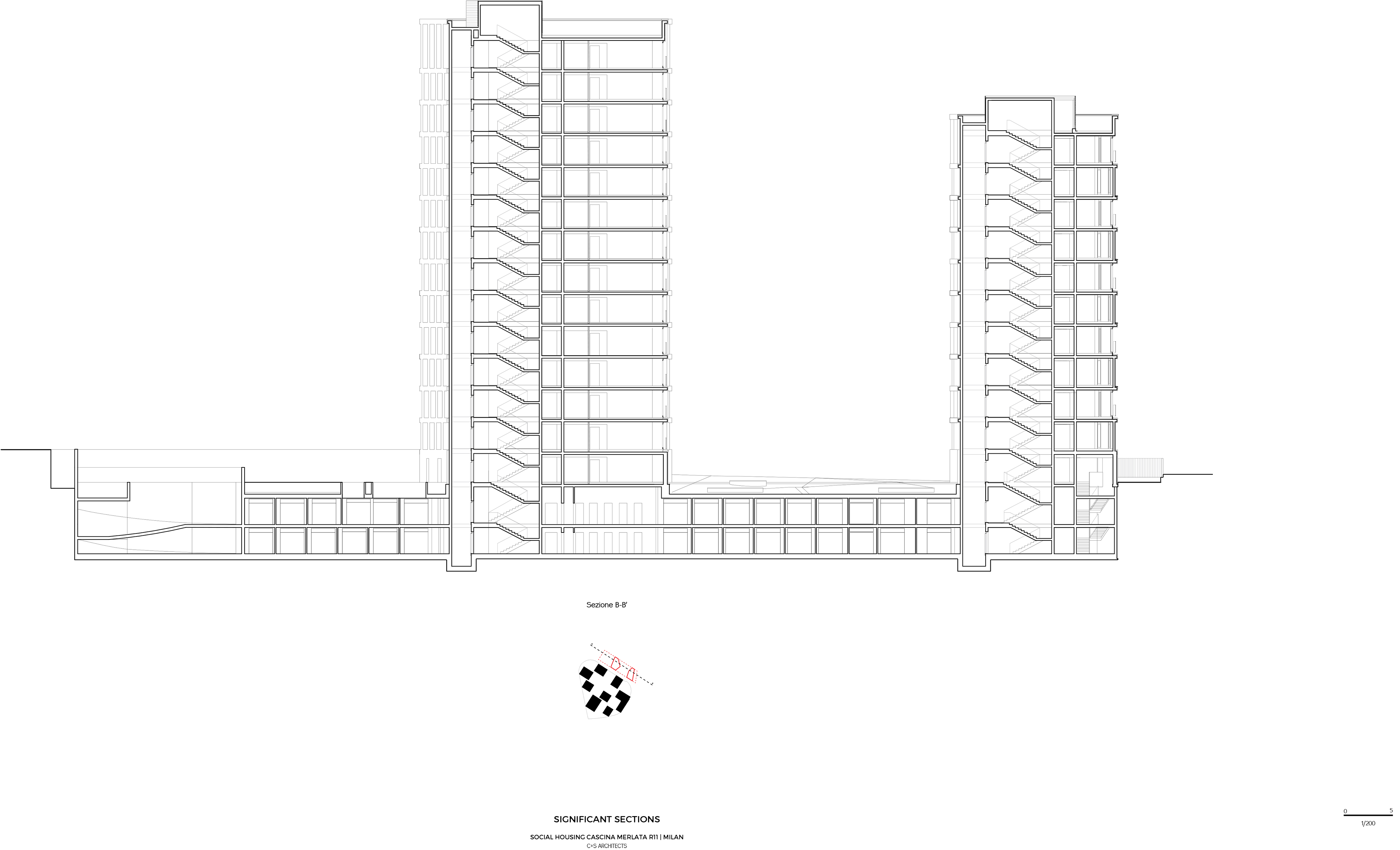 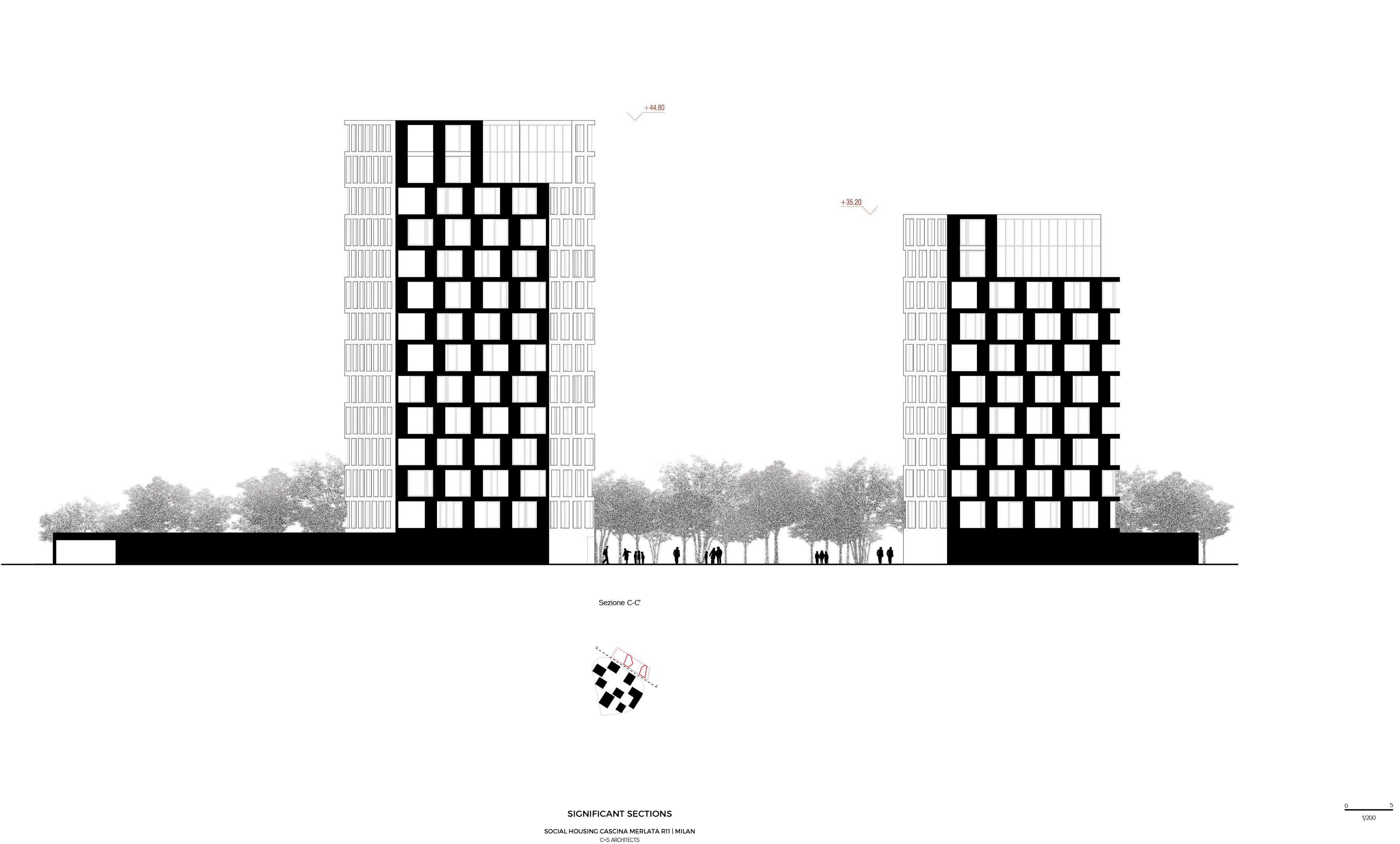 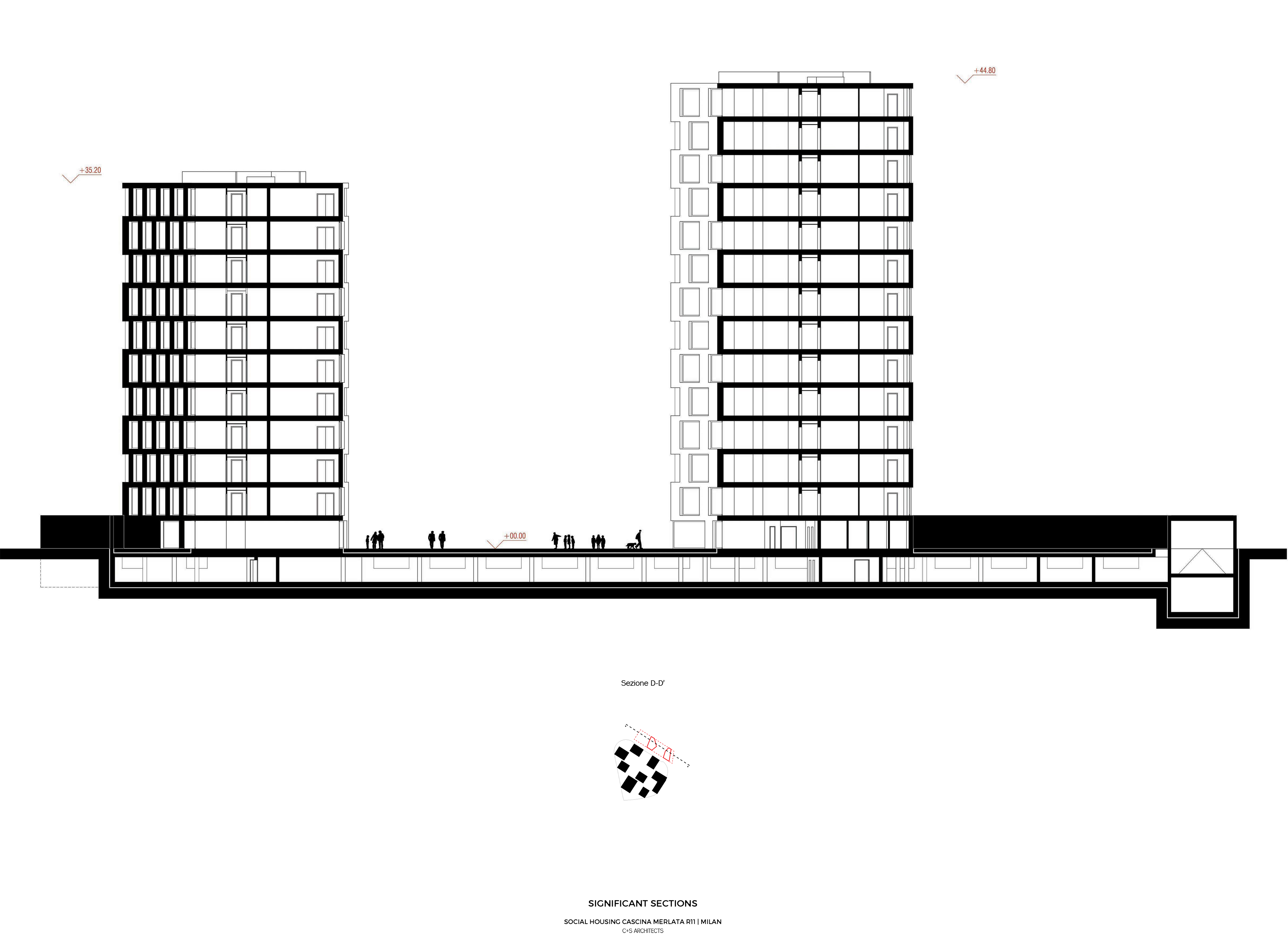 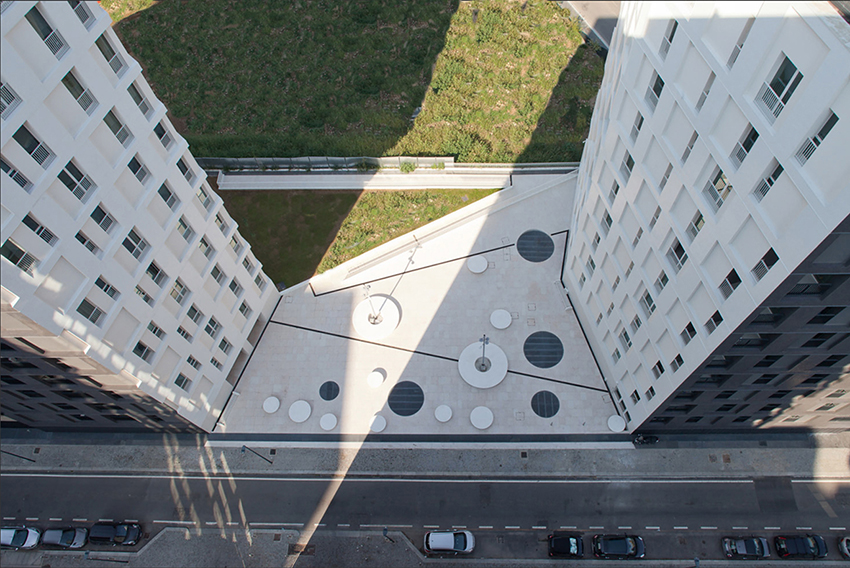 Of which
residential – Di cui Residenziale: % 90

Facilities for the public – Attrezzature pubbliche: % 5

The design started in 2011, with a construction cost, which was never updated. Compared to other similar projects in Milan and at present times, where we see a huge increment of construction costs, the overall cost is 20% lower than what it should be

Rental/sale cost compared to market price
Costo di affitto/ vendita rispetto al mercato The 103 apartments were all sold in less than 3 months when proposed to the market. The buyers are families with medium to low income as described in Milan codes for assignment. The project foresees 10% of large apartments with 4 bedrooms, 67% of middle-size apartments with 2 bedrooms and 23% of small one-bedroom apartments

SOCIAL SUSTAINABILITY – SOSTENIBILITÀ SOCIALE
Rules of allocation – Regole di assegnazione: The buyers are families with medium to low income as described in Milan codes for assignment.

Involvement of inhabitants in the building process – Coinvolgimento degli abitanti nel processo: Worshops in collaboration with the Fondazione Housing Sociale were organized to design the collective spaces and the outdoor playground.

Community accompaniment in the life of the building – Accompagnamento della comunità nella vita dell’edificio:
Euromilano has organized a series of meetings with the incoming community to explain the project, the facilities at disposal and the functioning of the building.

ENVIRONMENTAL SUSTAINABILITY
SOSTENIBILITÀ AMBIENTALE:
Functional mixitè – Mix funzionale
The project includes collective spaces on the ground floors of the building, a public Piazza and a playground, beyond the 103 residential units and 104 underground parking places.

Common spaces and shared living – Spazi comuni e abitare condiviso:
The ground floor of both towers houses the entrance hall and ancillary spaces as well as services to the residence such as bicycle storage, common room, gym and storage room for separate waste collection.
The towers are set on two underground levels that contain 104 parking spaces, technical rooms and cellars as well as a colorful outdoor playground for children that was designed with a participatory project in collaboration with the Social Housing Foundation.

ENVIRONMENTAL SUSTAINABILITY
SOSTENIBILITÀ AMBIENTALE
Techniques and strategies for environmental saving:
The project is designed to address environmental and social sustainability principles. The use of heating pumps, a thick coating of the buildings, low-emission glasses for the windows, a considered use of the water consumption are paired with a careful choice of durable and recyclable materials, such as the stone and the glass mosaic tiles for the facades, as well as alluminium frames for the windows and the cladding of the roof volumes.

The plot R11 is located on the northern edge of the Highrise Village, bordering the Cascina Merlata park. The project creates an urban transition between the park and the Village.

C+S Architects designed the two towers as if they were generated from a single volume that was split into two parts to allow the park and the public space to creep in and extend to the neighboring Highrise Village. The fracture forms a concave space, a collective space. In this way the border becomes a threshold.

The fracture shapes an open, concave space, a collective space, a ‘Piazza’. The project is critical of the urban concept of the ‘gated community’, instead opening the buildings to the surrounding community and physically designing a square in material and chromatic continuity with the towers, which underlines the importance of sharing the collective space as a key point for strengthening the identity of the community. The square is a free, durable, open public space, accessible to all (including the visually impaired) that connects the two different levels of the park and the street, through a series of ramps. Made of white Prun stone, the square is dotted with a series of circular benches, which have been positioned to avoid cars parking in the public space. The mono-material and mono-chromatic space emphasizes the urban role of the complex as a threshold space between the park and the city. The ground of the square is an artificial landscape in white stone, modeled and distorted to make the paved pedestrian space of the square and the surface of the park continuous. A difference in height of about two meters between the road and the park is overcome with the design of the inclined planes of the pavement that define a ramp with a slope of 5%.

Along the edge of the square, two towers, of fourteen and twelve floors, are arranged on the sides of the square, defining the space and seem to arise from the same volume, split in two by the public space that has been excavated inside. The two towers develop 10.830 square meters of SLP, distributed in 103 apartments divided into 14 four-room apartments (10%), 68 three-room apartments (67%) and 24 two-room apartments (23%). The ground floor of both towers houses the entrance hall and ancillary spaces as well as services to the residence such as bicycle storage, common room, gym and storage room for separate waste collection.

The towers are set on two underground levels that contain 104 parking spaces, technical rooms and cellars as well as a colorful outdoor playground for children that was designed with a participatory project in collaboration with the Social Housing Foundation. The residential volumes have been distorted and manipulated, to improve the view towards the park of most of the apartments and imagining a continuity of public spaces from the park to the main street / square and vice versa.

The material treatment and the coloring of the facades reinforce the idea of ‘urban gate’ of the complex, thanks to the material and color continuity between the square and the facades, covered with white Prun stone (the same material as the facing of the Piazza) up to the first level and from the glass mosaic on the upper levels.

Beyond the first level, the insulated coat system is covered with Sicis glass mosaic tiles (also white towards the square and black on the other sides) to recall the tradition of Milanese residential construction. The finish of the facades (beyond the ground floor) consists of an external coat wall on which the Sicis-type glass mosaic is glued, with 1.5×1.5 cm tesserae.

Sicis-type glass mosaic is not a flat coating. Each card is variable in section. This choice allows the façade to transform itself by reflecting the light in a different way.

The façade seems to light up and change: it is activated by the variation of the daylight as well as climatic transformations. The other elevations are instead drawn with darker colors. The texture of the surface of these buildings is characterized by a layering of layers, which captures the shadows and reflections of light on the facades. The main pattern  is determined by the regular design of a grid of square openings in which the windows and loggias are placed. The texture is thus characterized by the irregular alternation of glass backgrounds, openings and blind parts covered with two different colors of stone and glass mosaic.

Each material was also chosen for its durability and recyclability over time. “C+S firmly believe in the potential of a free public space, well designed and capable of being activated by people, their memories, their dreams and their experiences that will help create future memories and identity” – write Carlo Cappai and Maria Alessandra Segantini- “For this reason, through the development projects in which we are involved, we work to give back to all citizens the seeds of shared public space that they can cultivate with their actions”