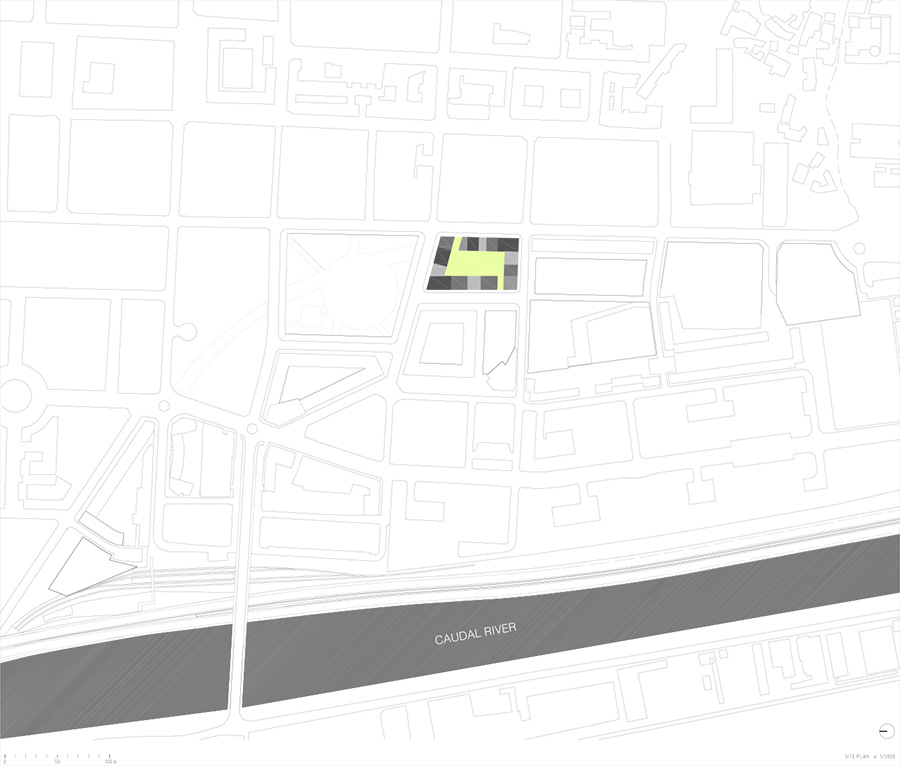 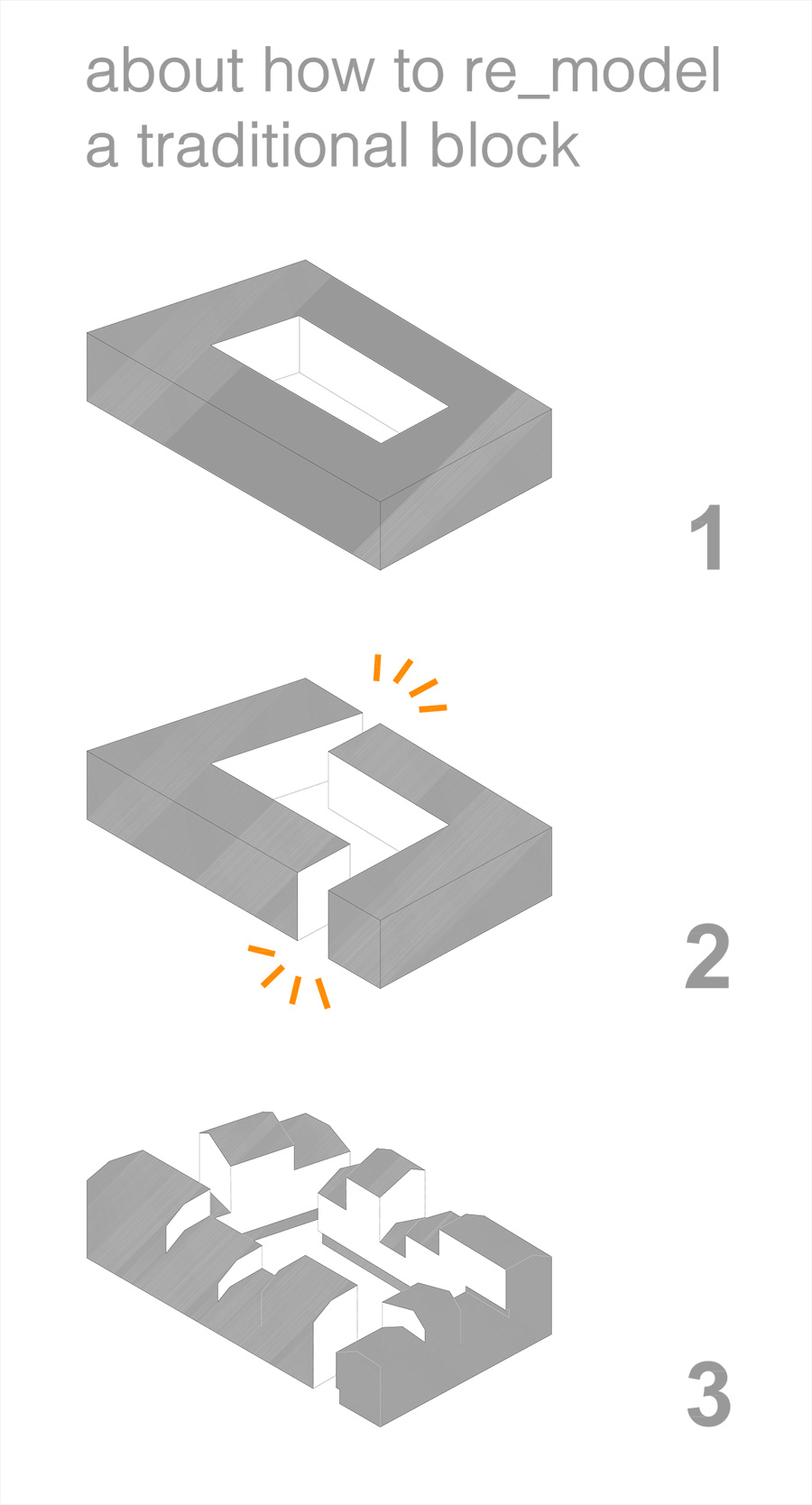 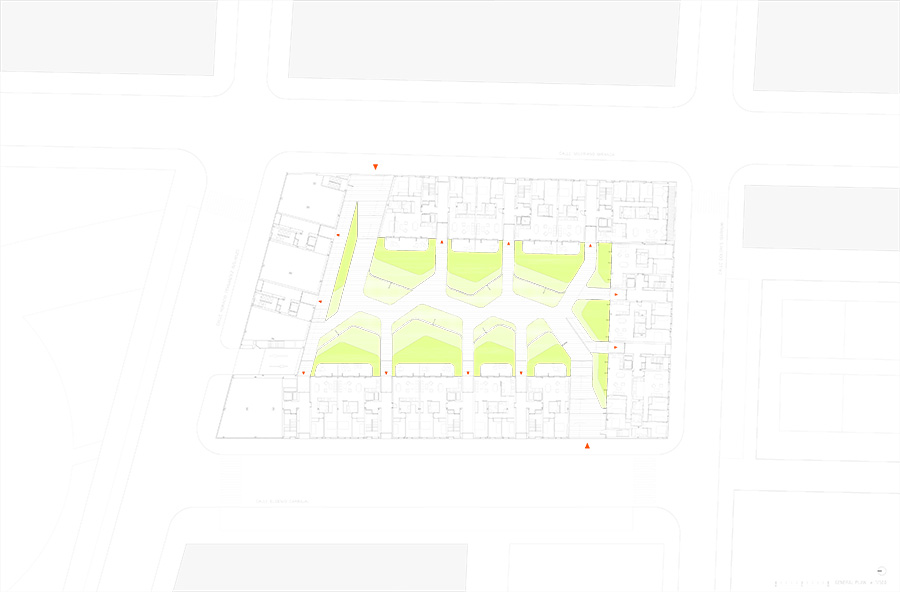 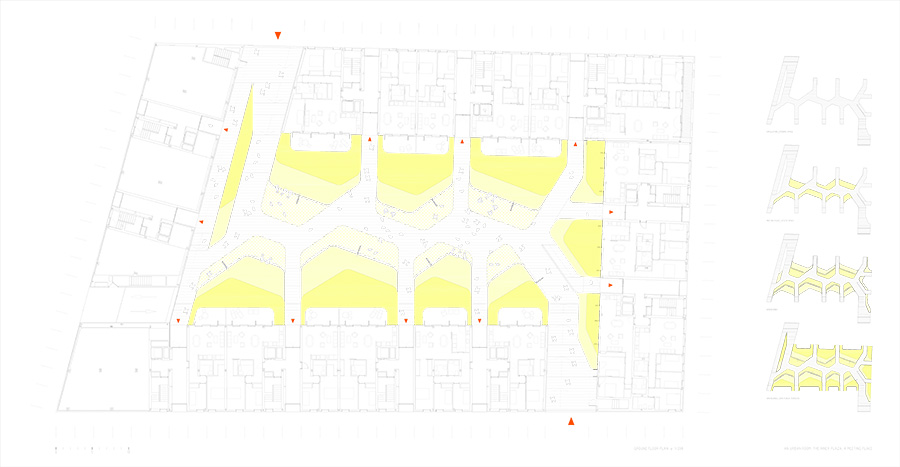 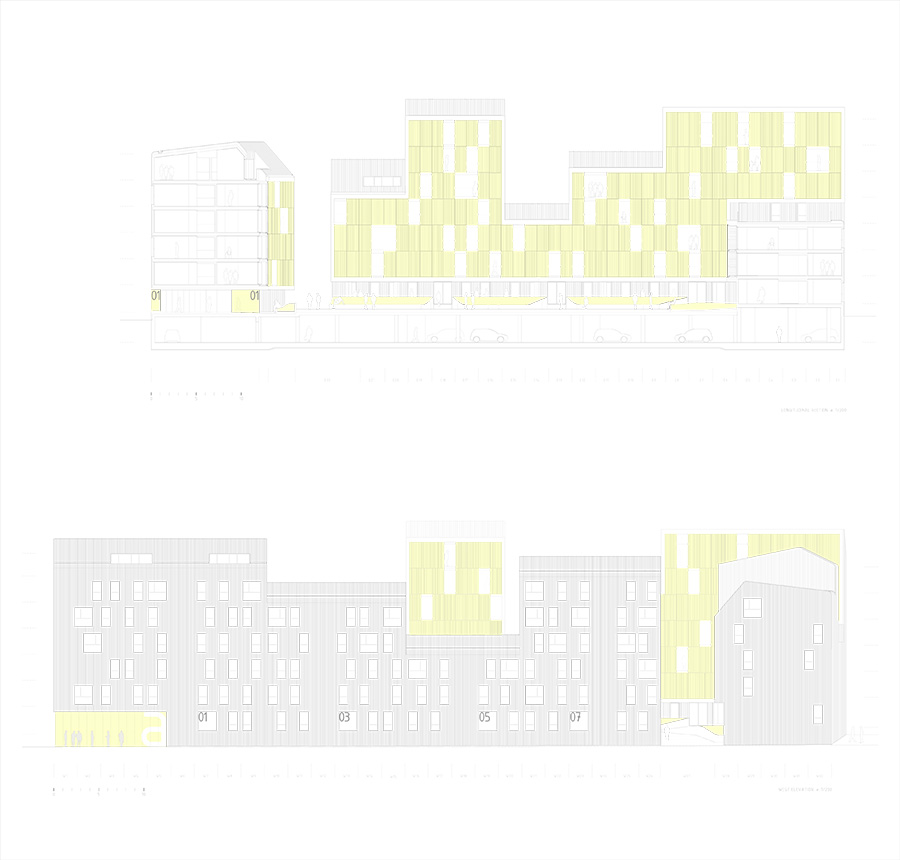 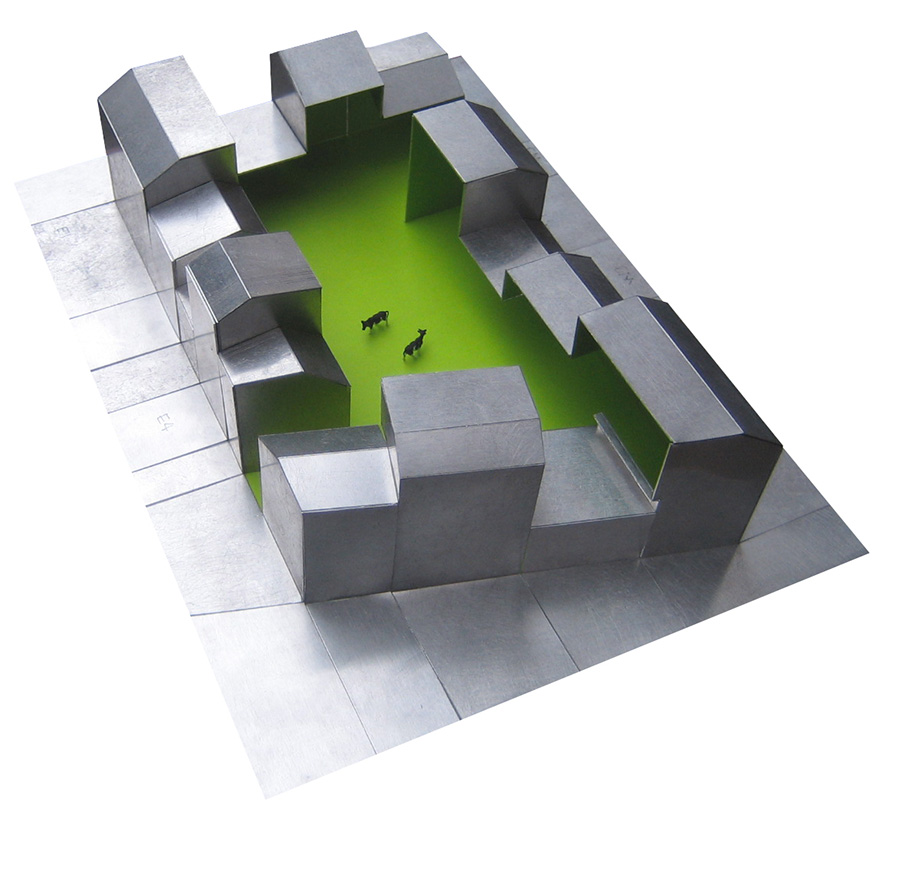 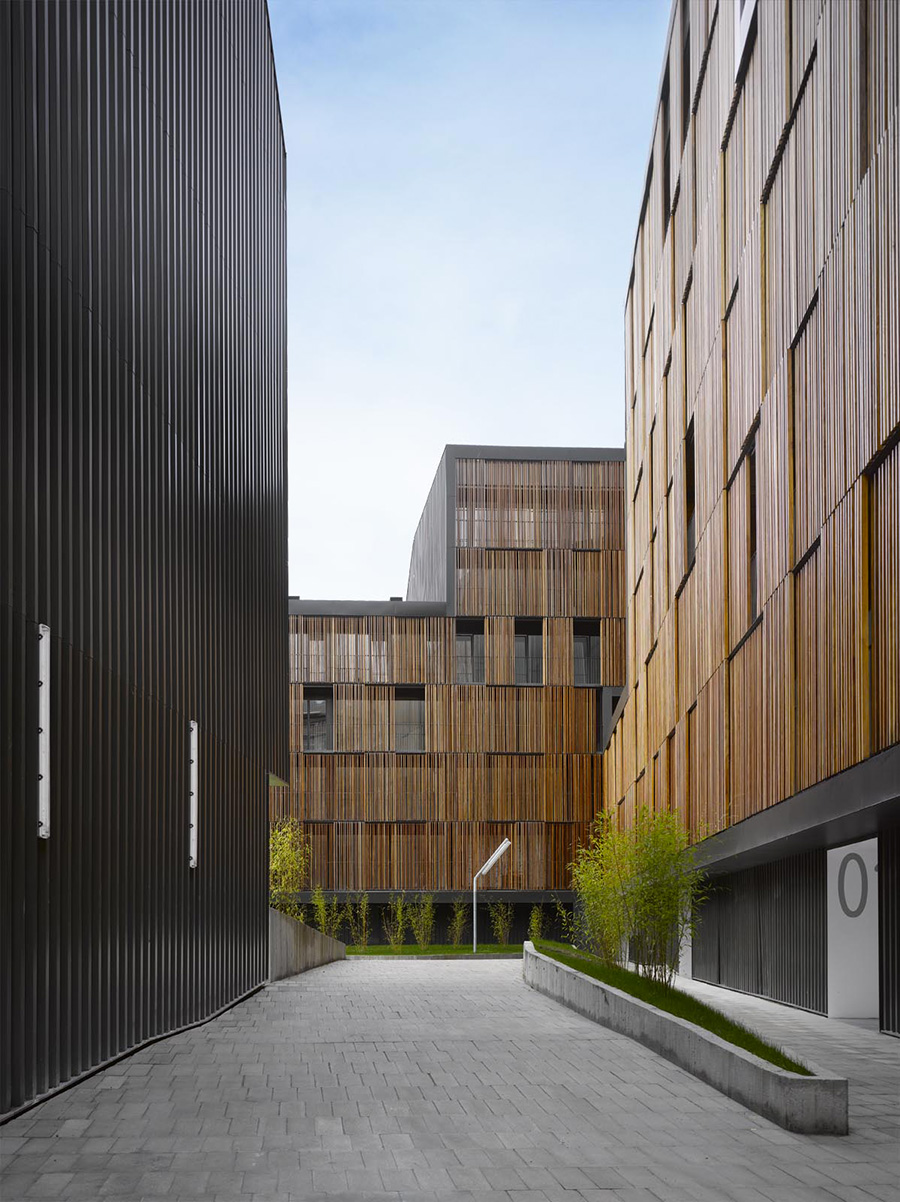 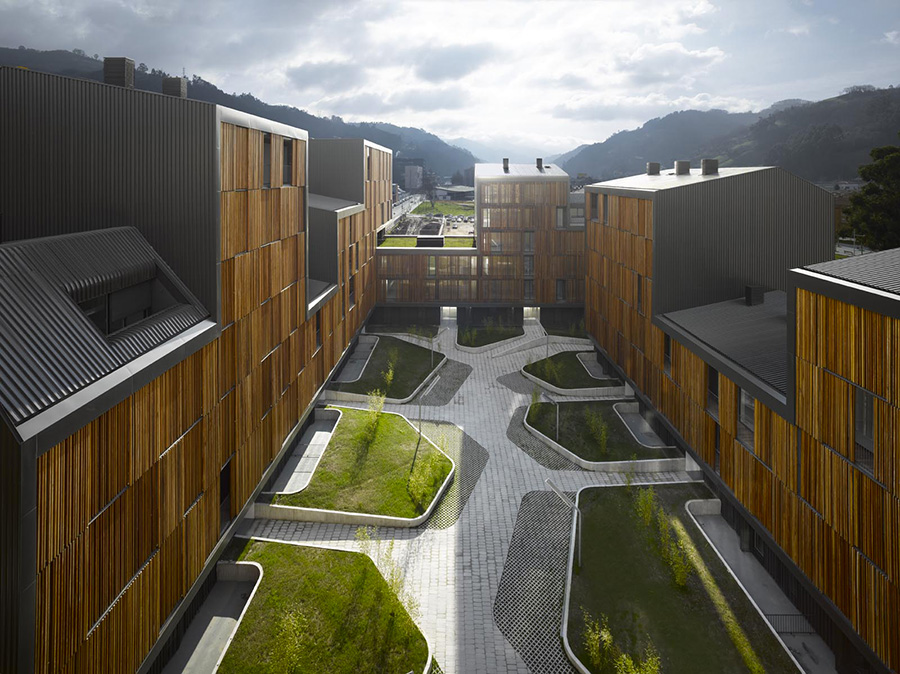 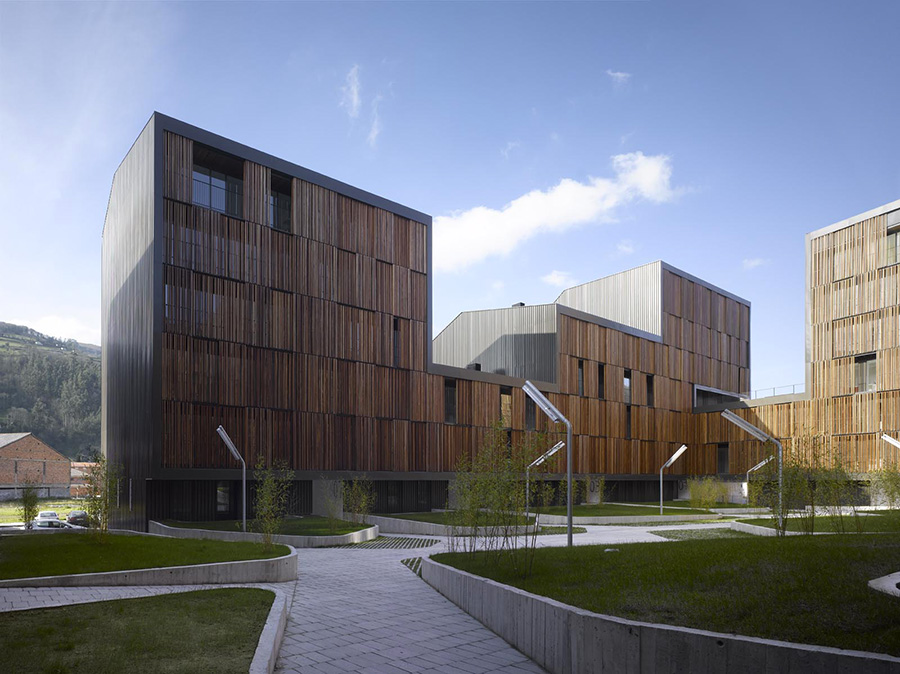 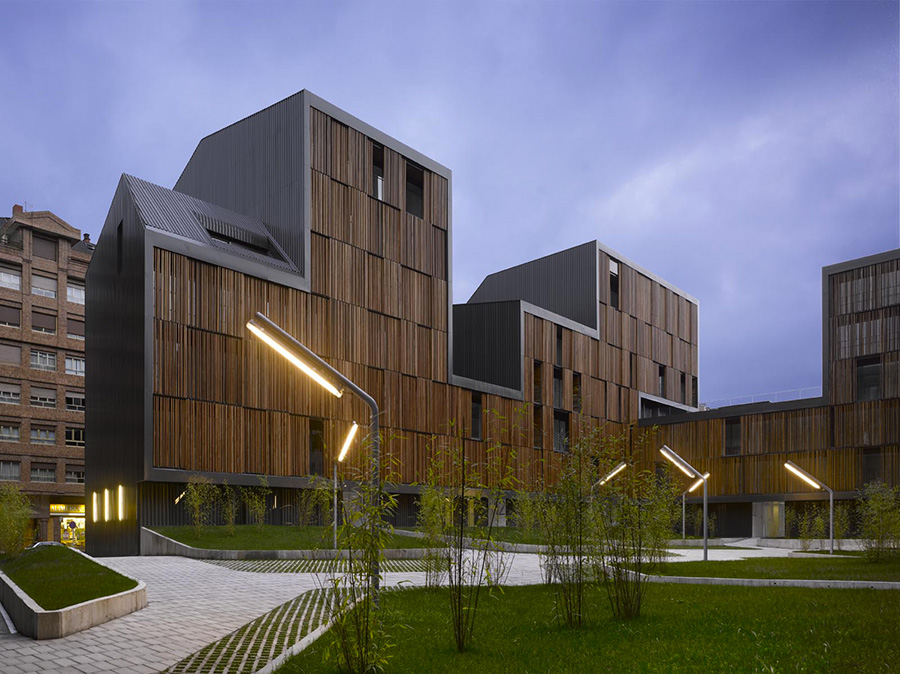 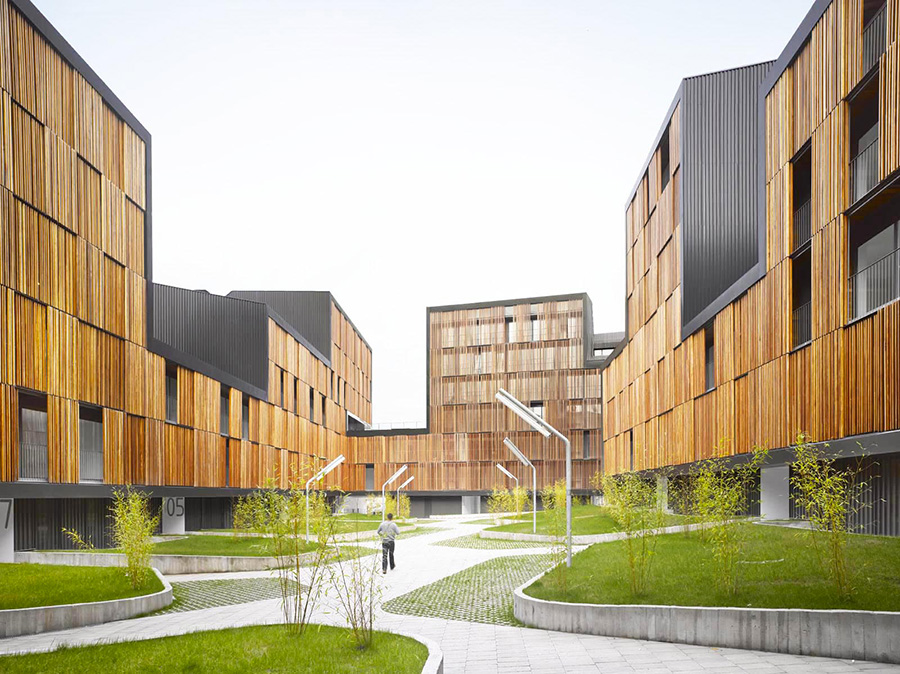 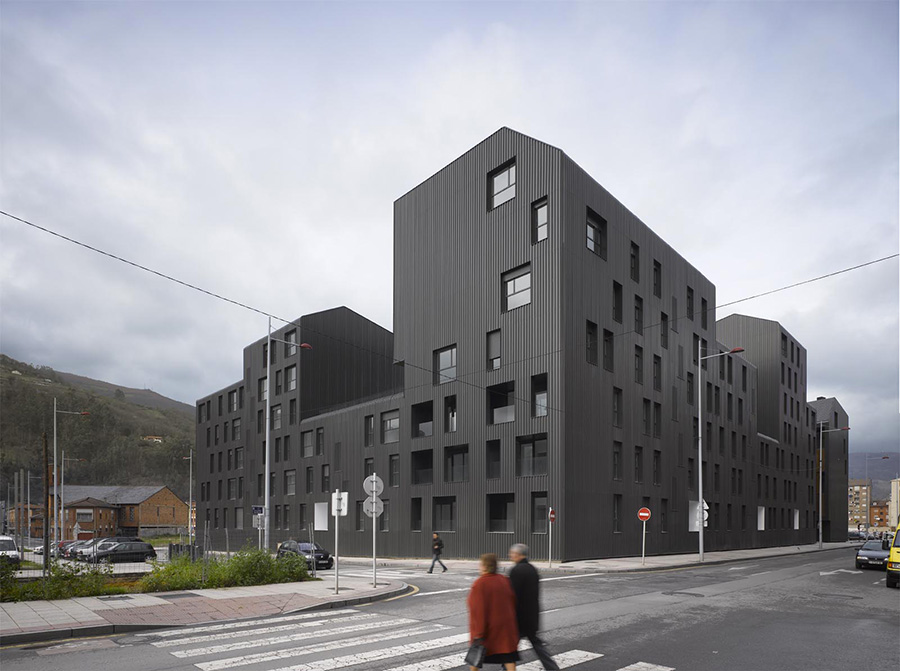 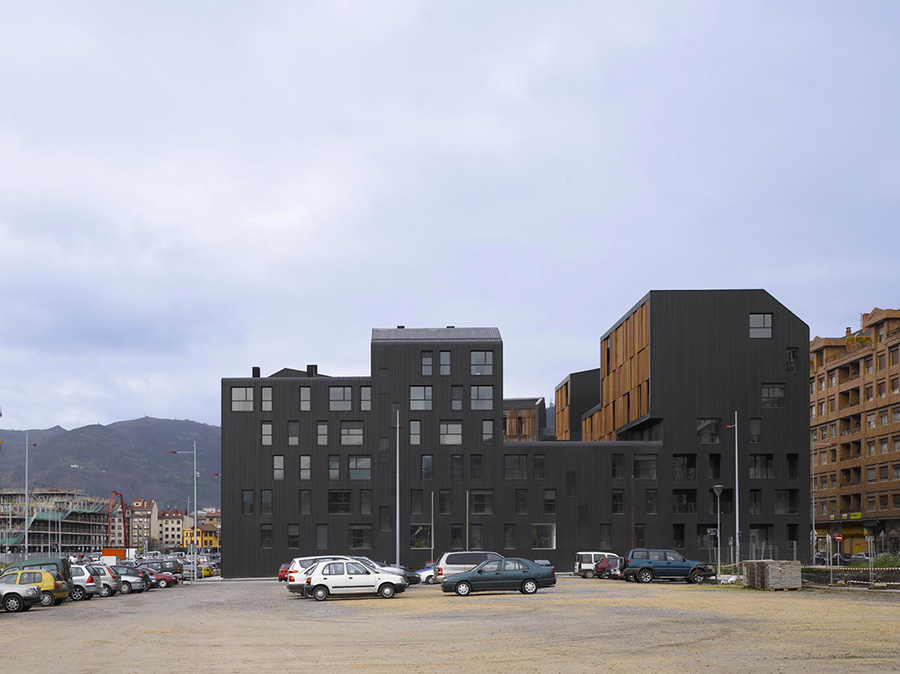 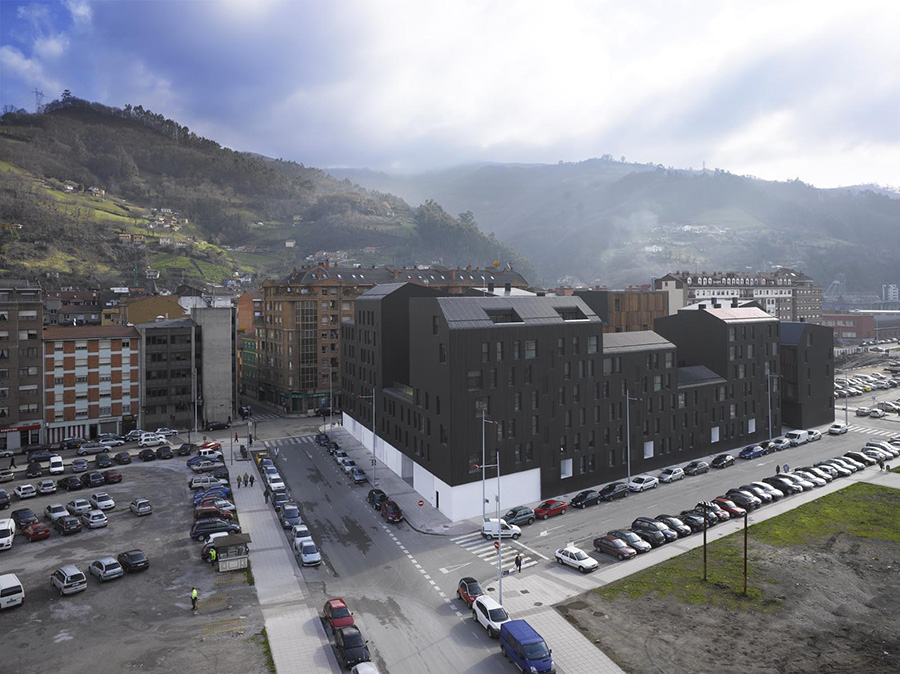 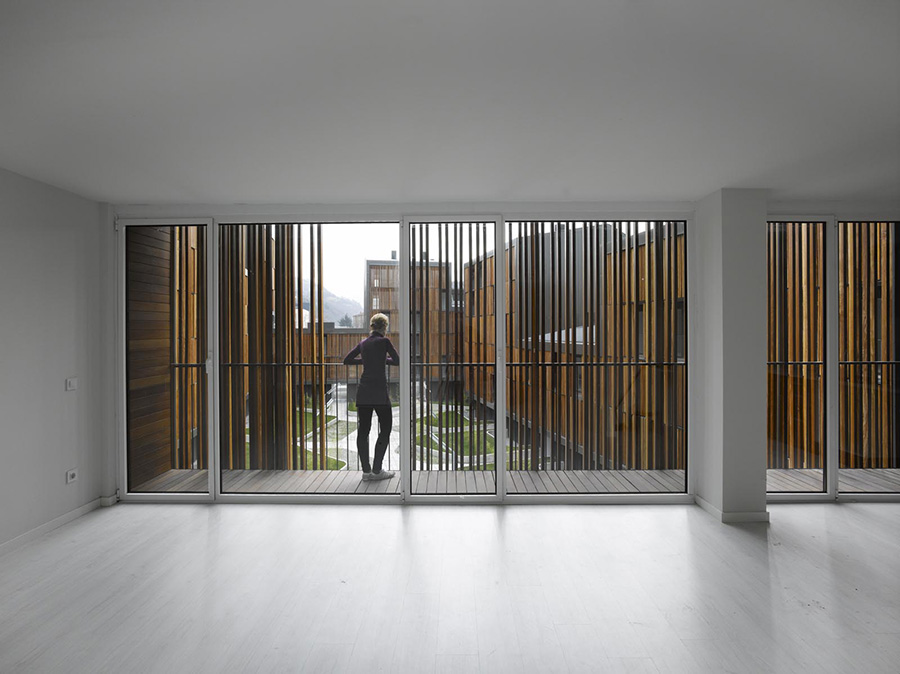 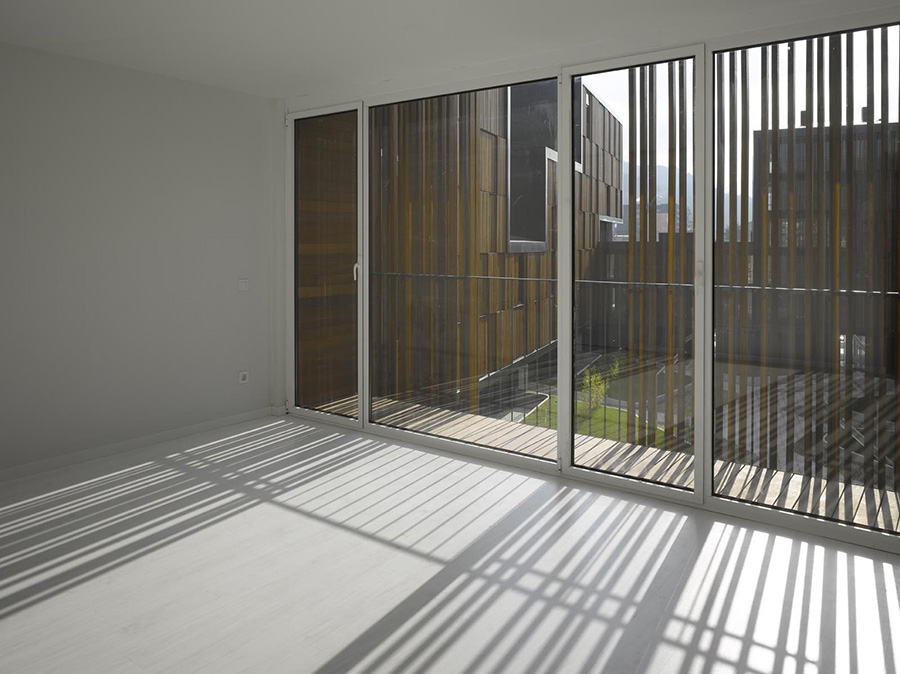 Capture the place, connect with the valley again.
One of the most interesting characteristics that you notice once you get to the place is that despite being in the middle of an urban building mass, you can find limited views of the fields and meadows in the valley located in the higher part of the surrounding mountains. Our first aim was to recover this double quality of the place, making the project urban and rural at the same time.
It was essential to re_model the rigid traditional urban block of seven different heights to end up building a new volume of variable heights (three to seven stories), containing the complete residential program required. The rest of the program (storage rooms, garage and facilities) was designed in a common underground basement.

We wanted the building to match the environment, voids and cuttings which allowed the view of the mountains in the empty spaces between the buildings, fragments of the Asturian landscape in the distance, enabling the sun and the air to enter the inner space at the same time.

An urban room. The inner plaza, a meeting place
We proposed a return to the origins of the site. An inner world that takes us back to the fields that could no longer be seen, an urban room with fragmented borders, attracting the inhabitants of Mieres through its doors, open to the city.
Opening the block was another of our priorities, and we managed to avoid turning the interior space into a forgotten back area, making it the center of the social meeting of its inhabitants as well as a place worth seeing. The day spaces of the apartments face the plaza, hence generating activity in its surrounding facades. The access was designed by breaking the block in two of its corners, creating diagonal space tension. The entrance to the apartments passes through this intermediate space, activating it and generating the necessary neighborhood relationship.

The plaza was designed with a slight slope that absorbs the natural inclination of the site and gently links all the levels of access and main entrances. The landscaped green areas are slightly higher, containing the spaces for the exclusive use of the ground floor apartments, separating them from the public circulation areas. The space is built with concrete blocks of varying porosity, low concrete walls, which serve both as a plant container and as a bench, and native grass and groups of bamboo plants.
Facades, dialogues with memory
The dual nature of the project results in a double material configuration. On the one hand the urban face materializes in steel and brings back the more industrial and mining image of Mieres, the former main economic engine of the city.
Once inside the building we looked for a rural reference, a return to nature and the origins of the site, the Asturian traditional porch, the use of wood, which reminds us, through its vertical rhythms, of the forests of the nearby mountains.
The outer skin serves as facade and cover at the same time. It is built with panels of dark gray steel corrugated sheets, and is treated as a protective shell and as a continuous rugged casing in which the edges are rounded.
The inside of the building has a double skin, a transparent one formed by large windows that define the inner space of the apartments, and another one composed of movable wooden shutters that characterize the terraces, allowing the user to control solar radiation and have the necessary degree of privacy at all times.
Housing Units
The housing units share the urban and rural vision of the project . They have double orientation enabling cross ventilation and view. The houses are organized by means of a central core of bathrooms that divides them into day and night spaces. The daytime areas face the inner plaza and have large windows to profit from the valuable sunlight in Asturias, while the night areas, with more controlled openings and equipped with blinds, face the city.

The housing units were generated adding up consecutive 2.60 meters modules, providing one, two, three and four bedroom units, thereby responding to the multiple types of apartments required.
The terrace, one meter deep, is presented as a visual and spatial extension of the apartment. It is intended to serve as an exterior gallery made of wooden planks bordering the entire inner perimeter of the building.
A radiant floor system with centralized heat production and individual distribution has been installed, completed with a simple home domotic system which, among other features, allows control of the facility. The building also captures solar energy through the panels installed on the flat roofs to support partly the production of hot water.
The structural underground system consists of a large slab of foundation and a structure of concrete walls and pillars. Above the ground the system is mixed, based on one-way concrete slabs on standardized tubular supports and steel bracings which allowed faster implementation, and greater economy and clearness of the space.