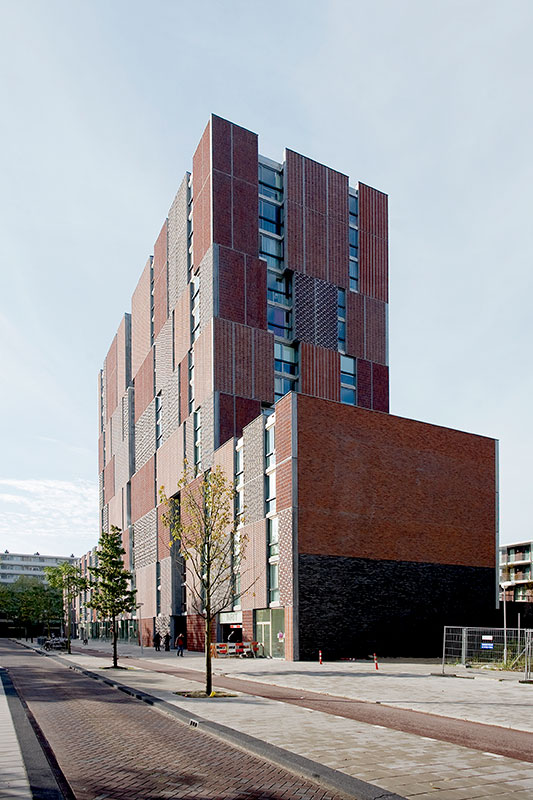 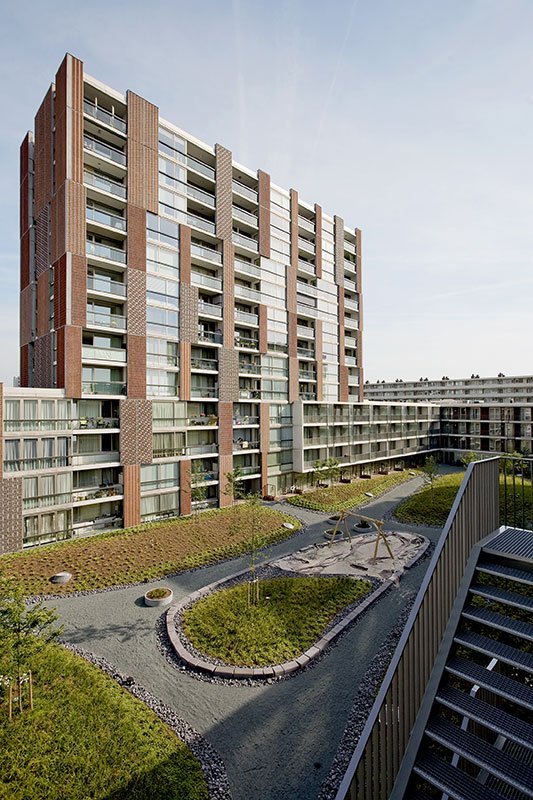 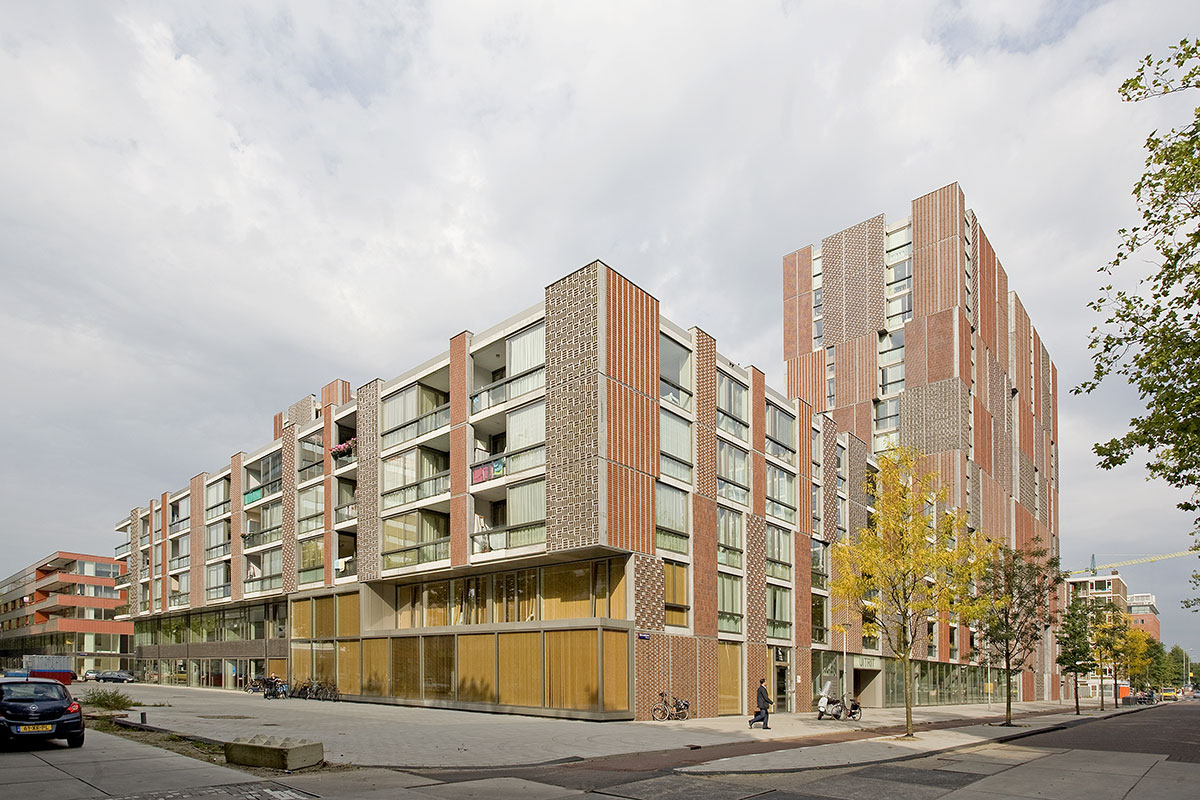 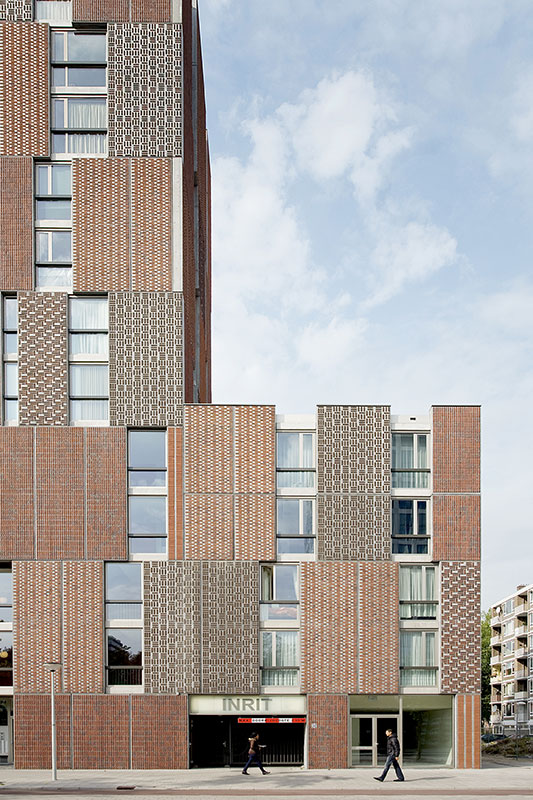 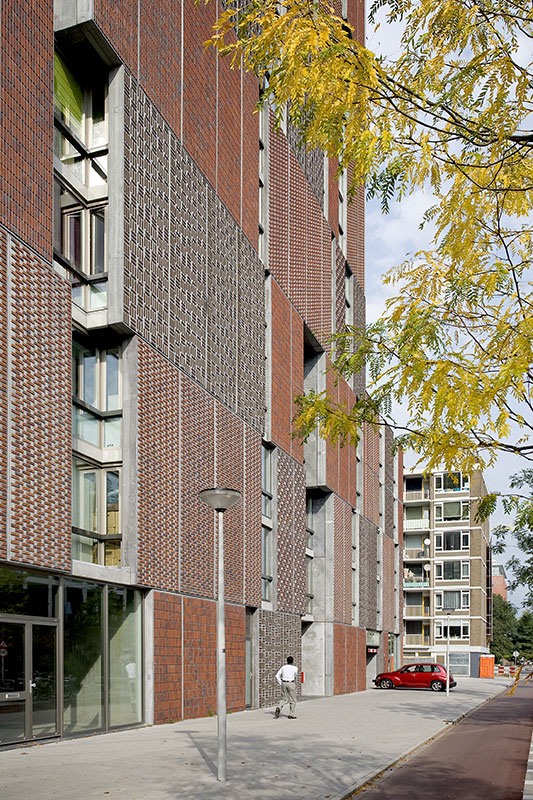 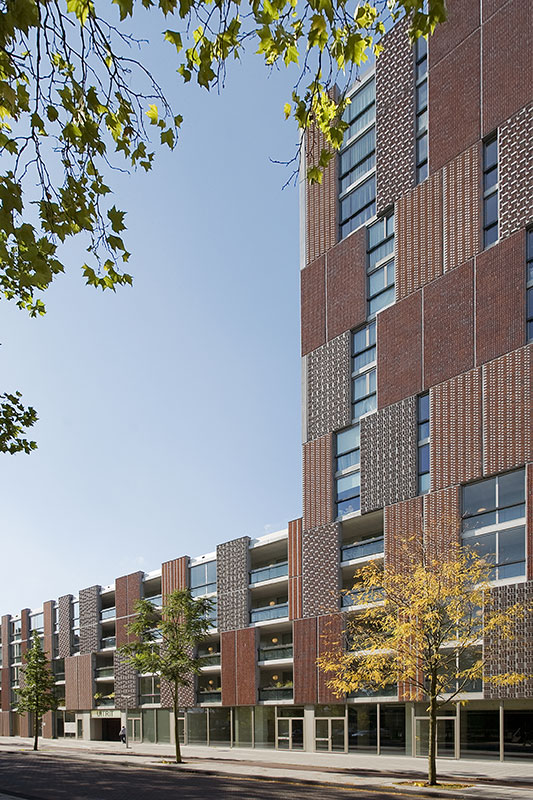 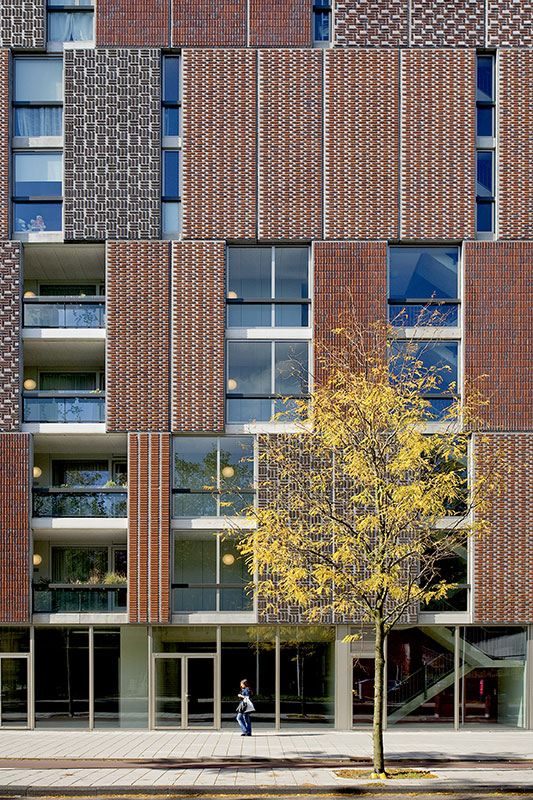 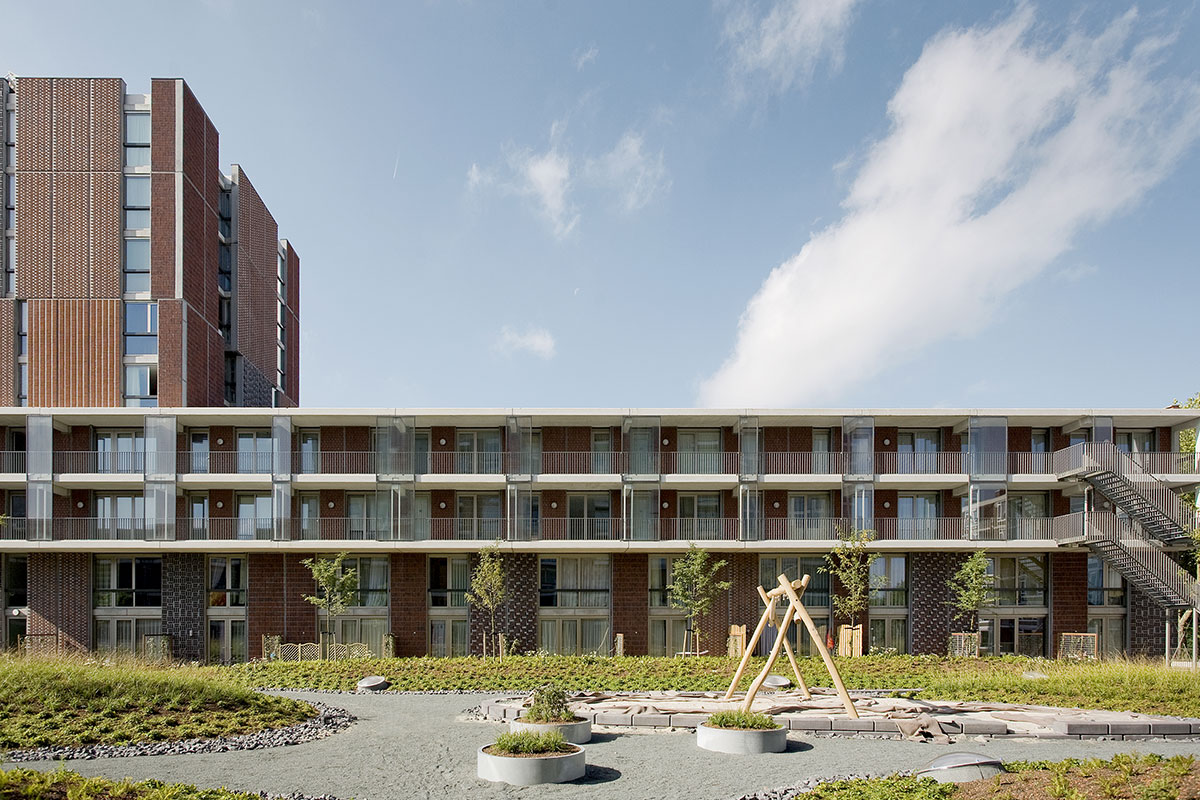 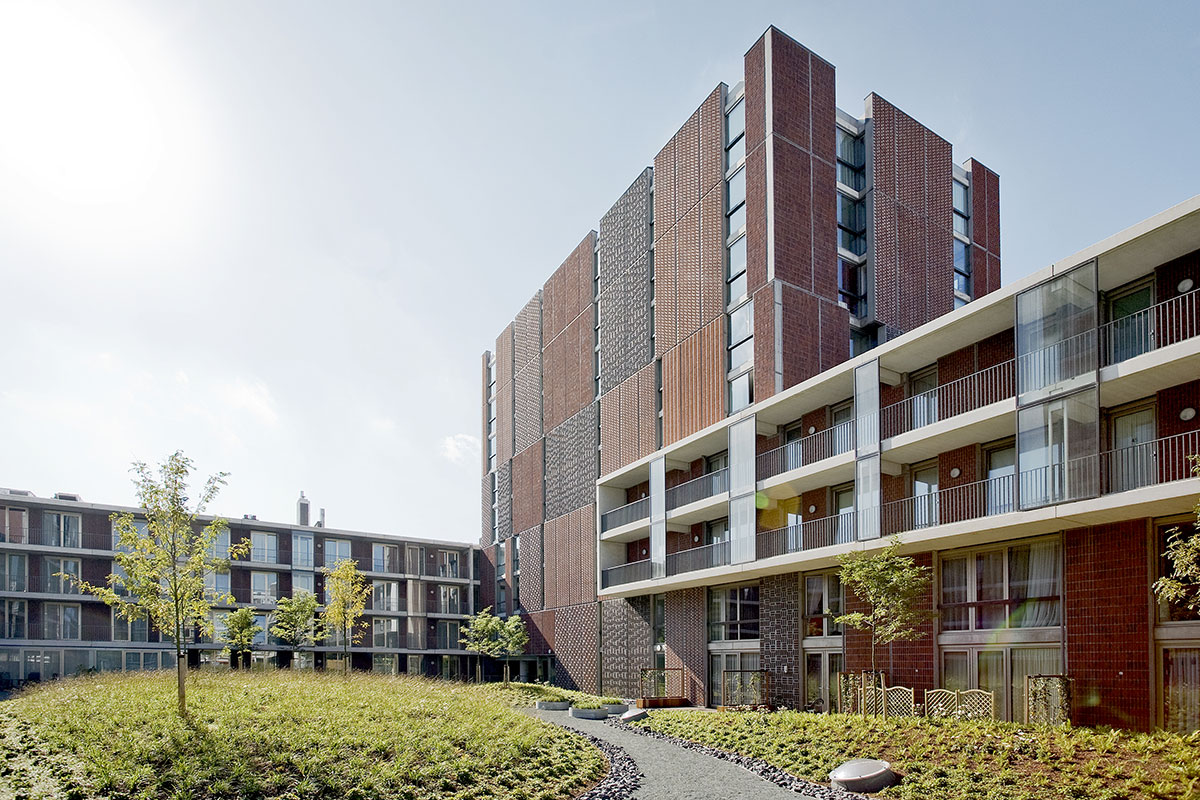 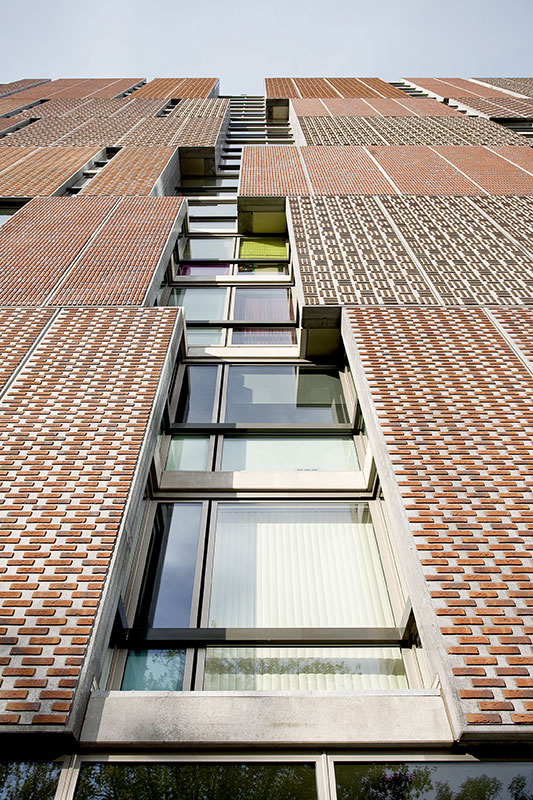 Of which residential: 90%
Public/communal areas: -%
Facilities for the public: 4%
Business/trade: -%
Offices: 6%

Block A is the first of three new blocks of buildings that are being built north of Delflandplein in the Amsterdam district of Slotervaart.

Maximum density was strived for in order to set a large-scale renovation of the Delflandplein neighbourhood into motion for the first new block of buildings: 170 social council dwellings, a day activity centre and business spaces will replace the original building, three strips of housing only several storeys high.

The largest possible variety of housing types and sizes were built in the block, ranging from small studios with common living rooms for people in need of care to relatively spacious six-room maisonettes and large five-room apartments. The trend towards reducing the programme for stacked dwellings to average three-room apartments of 90 m2 could thus be avoided. As a result, it was possible to build multiple types of residences in this block, and the original ideals of the western suburbs – a balanced differentiation of dwellings for the elderly, starters and families – have been restored here in an updated form.

An inner garden is being created on a car park in the heart of the building. Earthen hills make it possible to place large trees in the grass.

The considerable noise pollution from the nearby A10 Amsterdam ring road was the reason for this particular façade design. The two higher parts of the U-formed block have a very closed façade facing the ring road. The opposite west side, on the other hand, was made as open as possible with large frontages and outer areas.

The large prefab concrete façade panels, containing brickwork, allude to the original brick assembly technique used in Slotervaart, but at the same time attempt to break with the monotonous, repetitive appearance of traditional prefab façades.

By making the panels two storeys high, staggering the vertical seams and alternating the panels in the diagonal junctions, the building takes on a new, more sculptural and powerful appearance.

Due to the different tints of stone, as well as the alternating relation of the surface of the stones and the joints in the different brickwork patterns, a relatively colourful image emerges of woven carpets hanging next to and above each other.