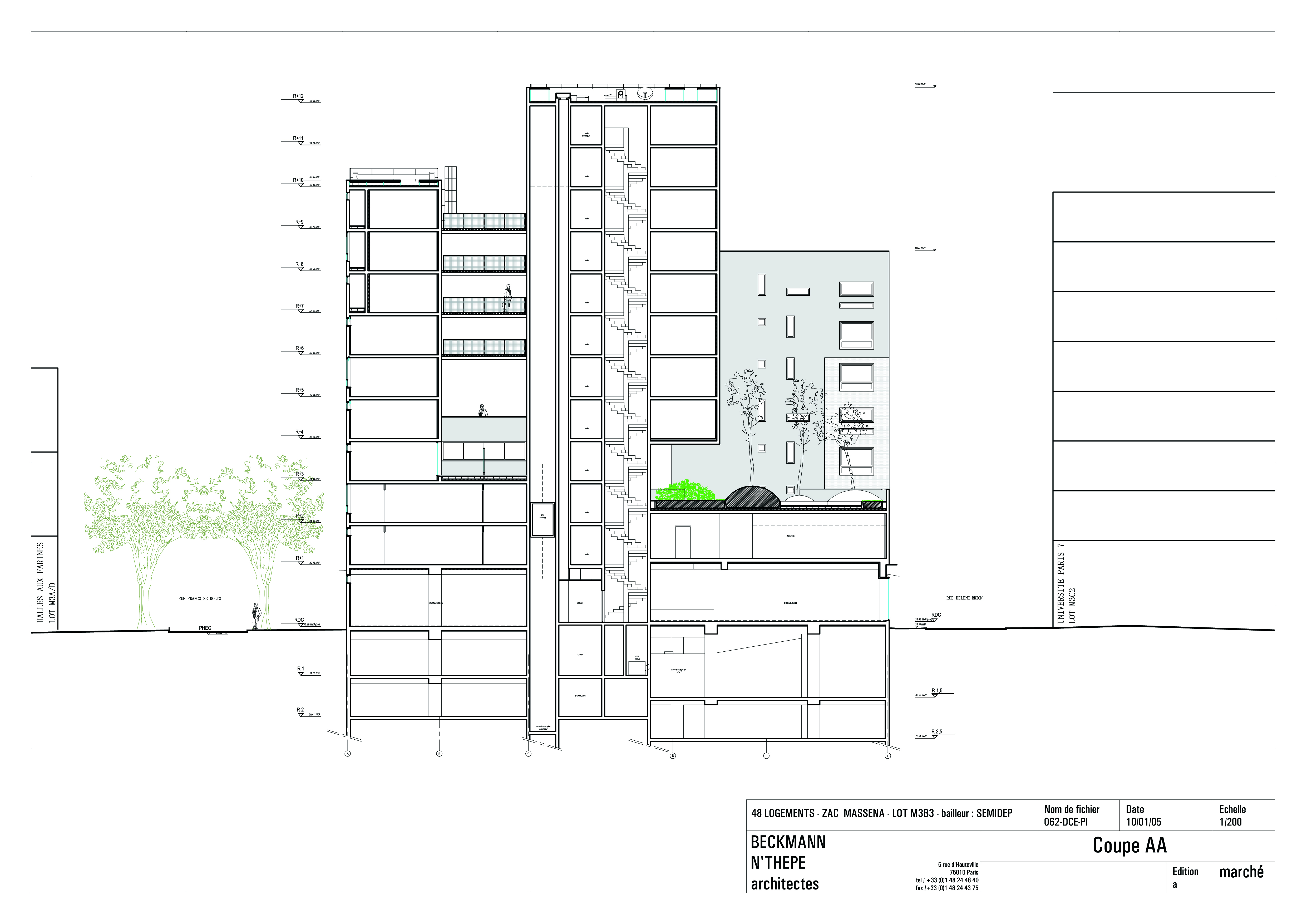 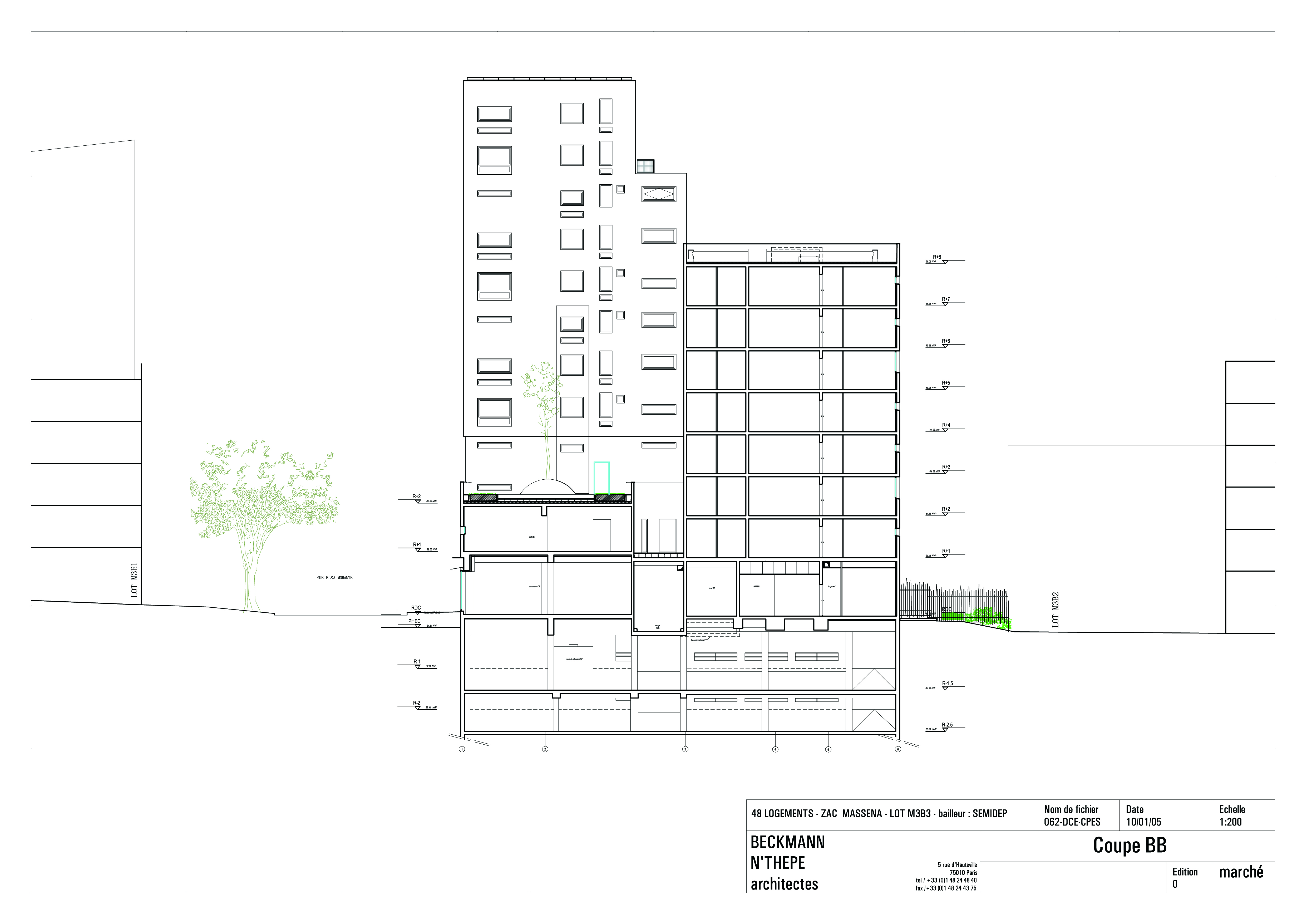 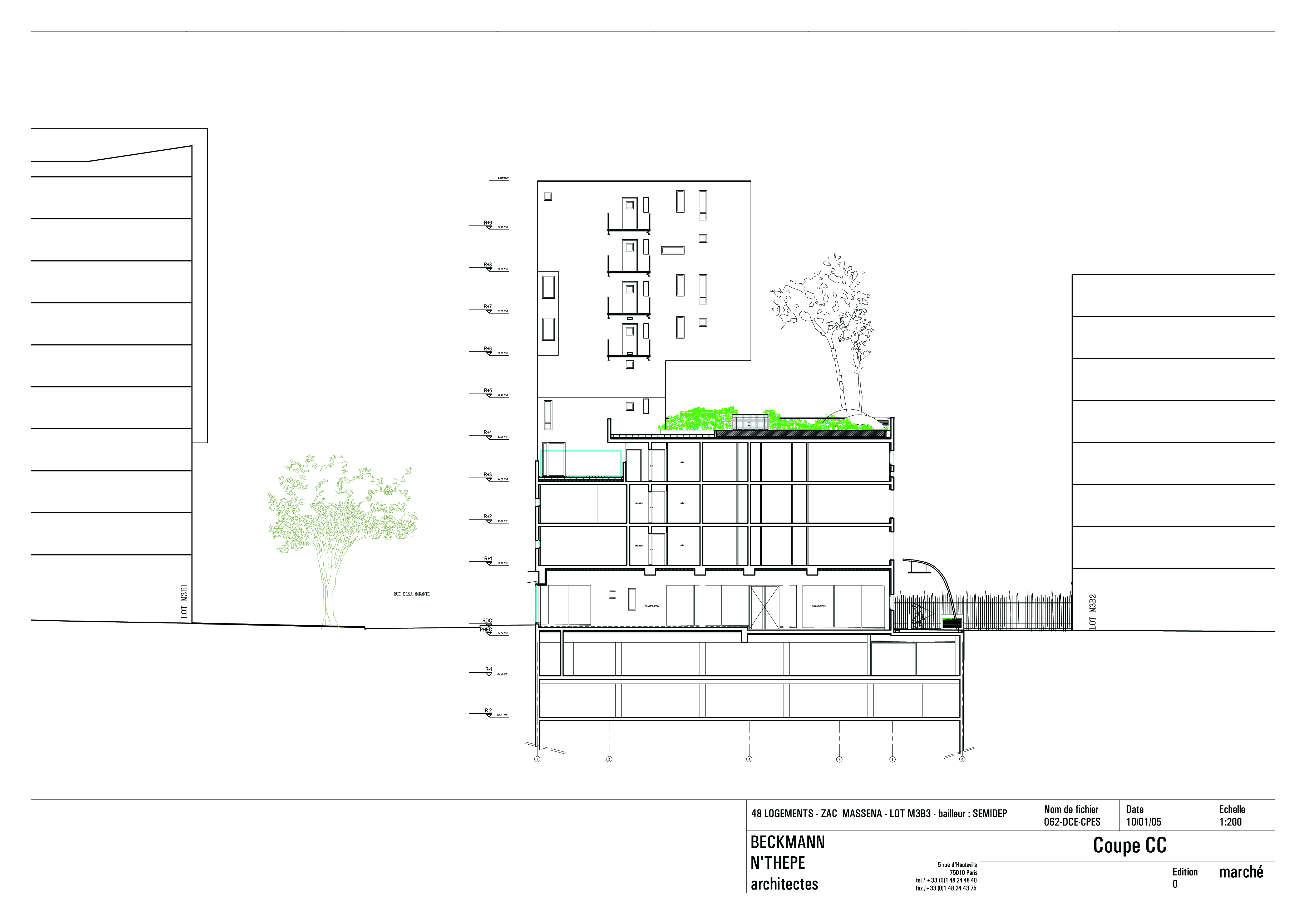 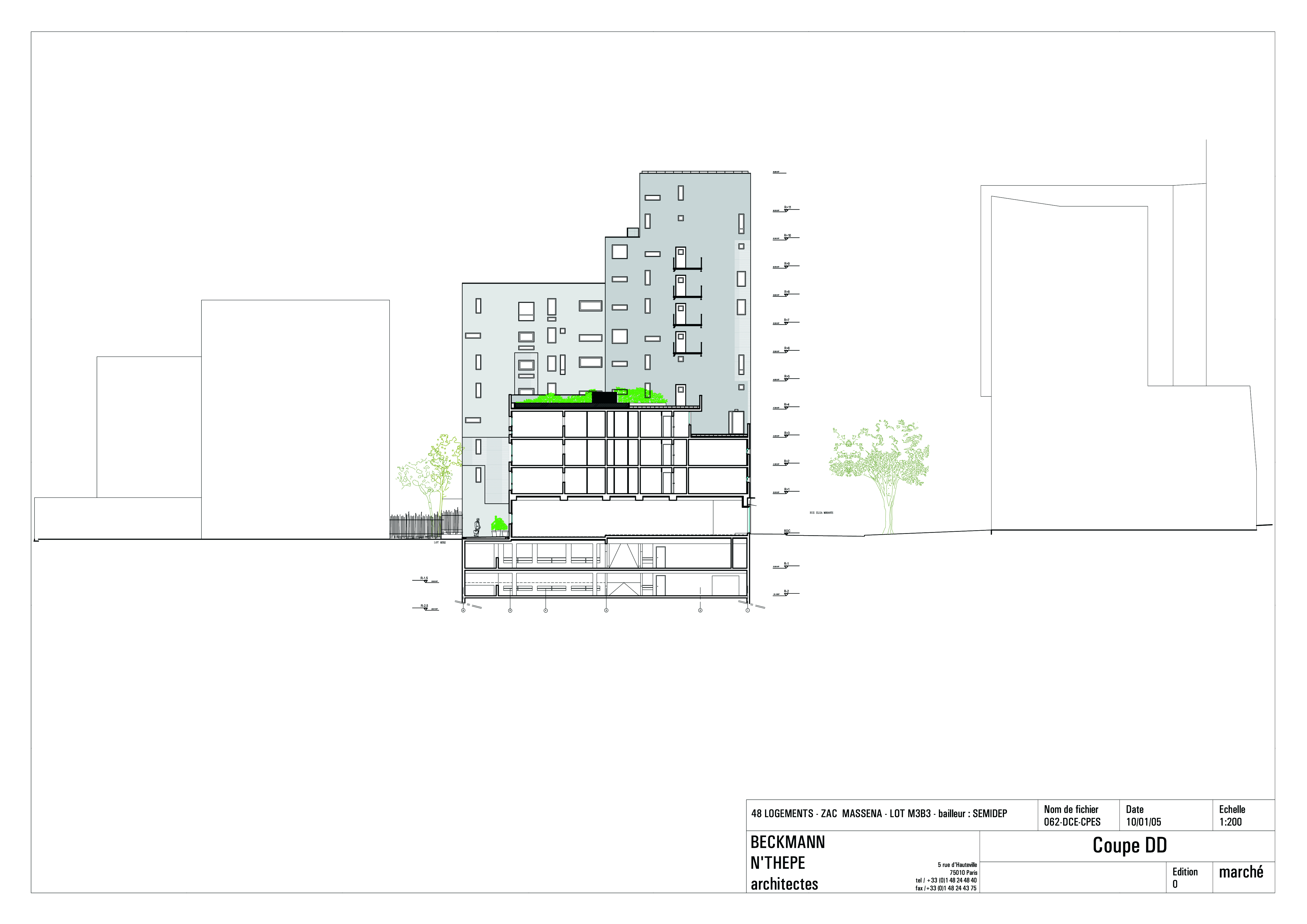 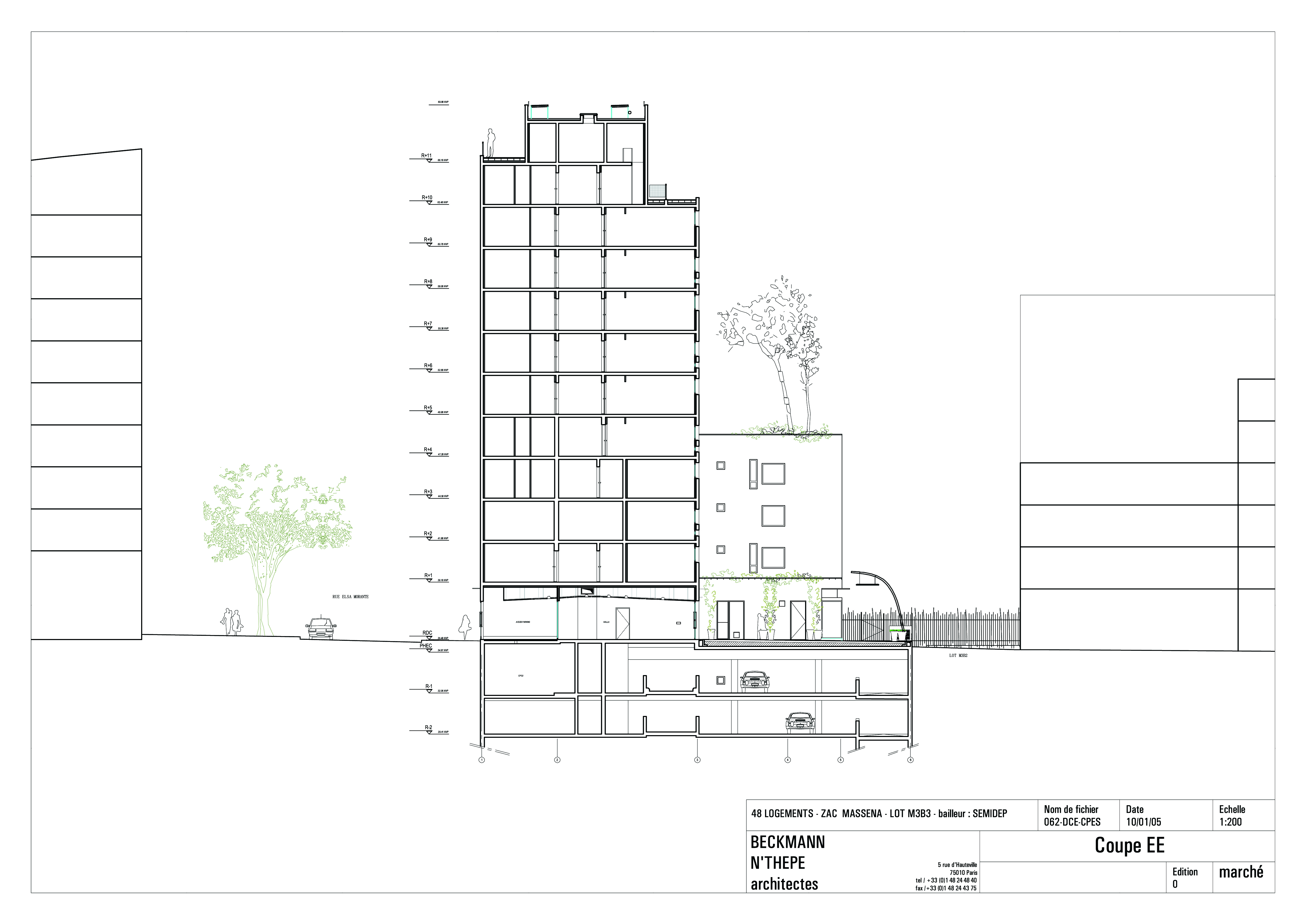 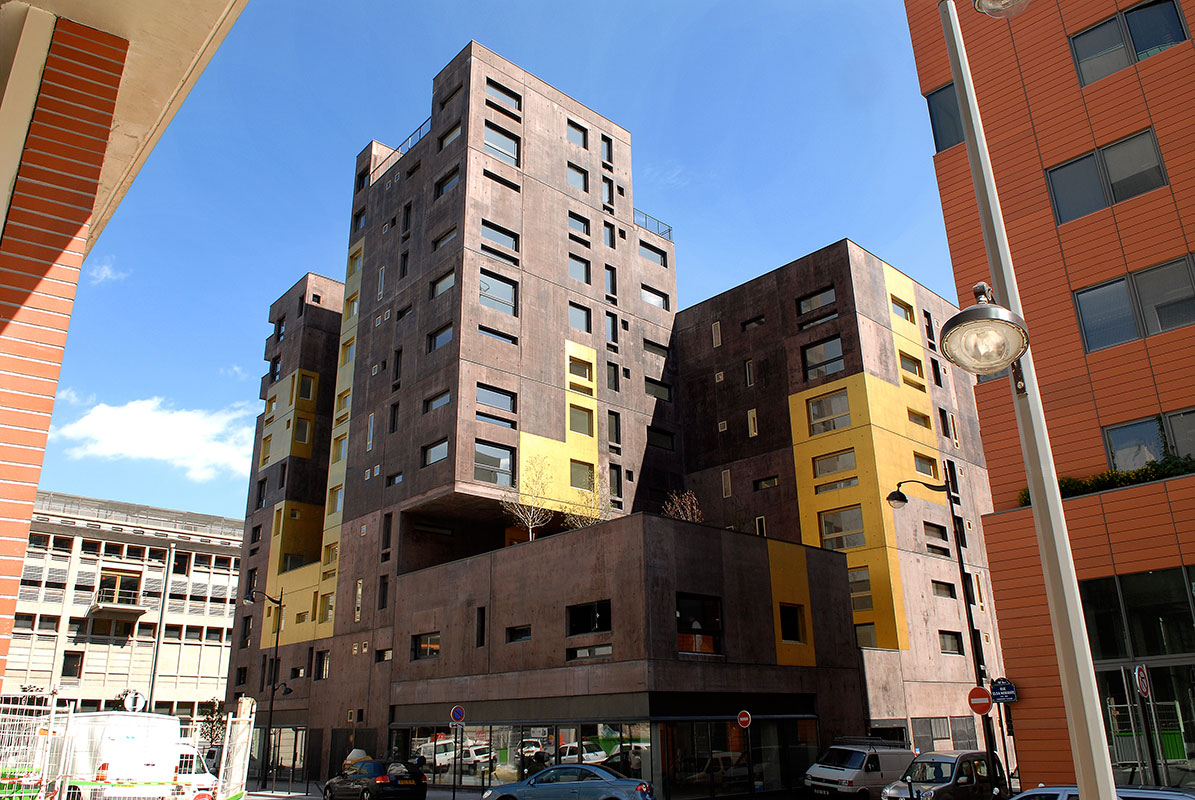 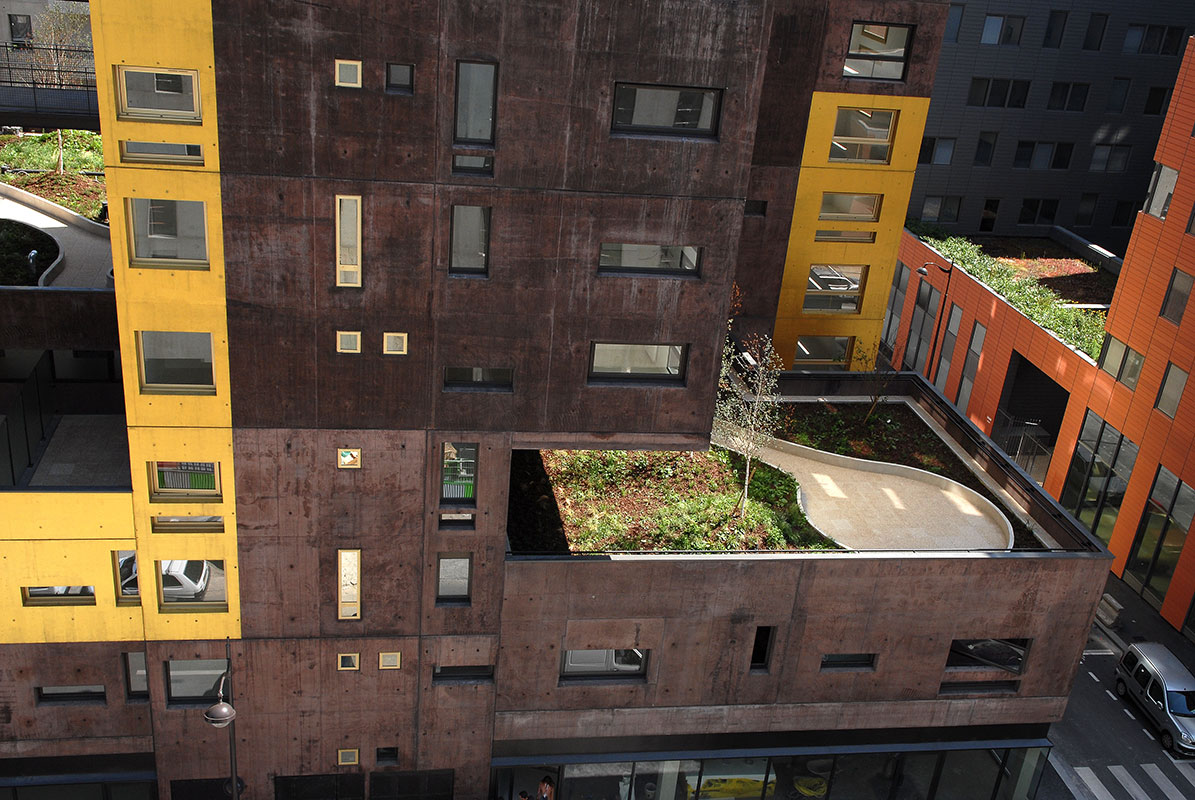 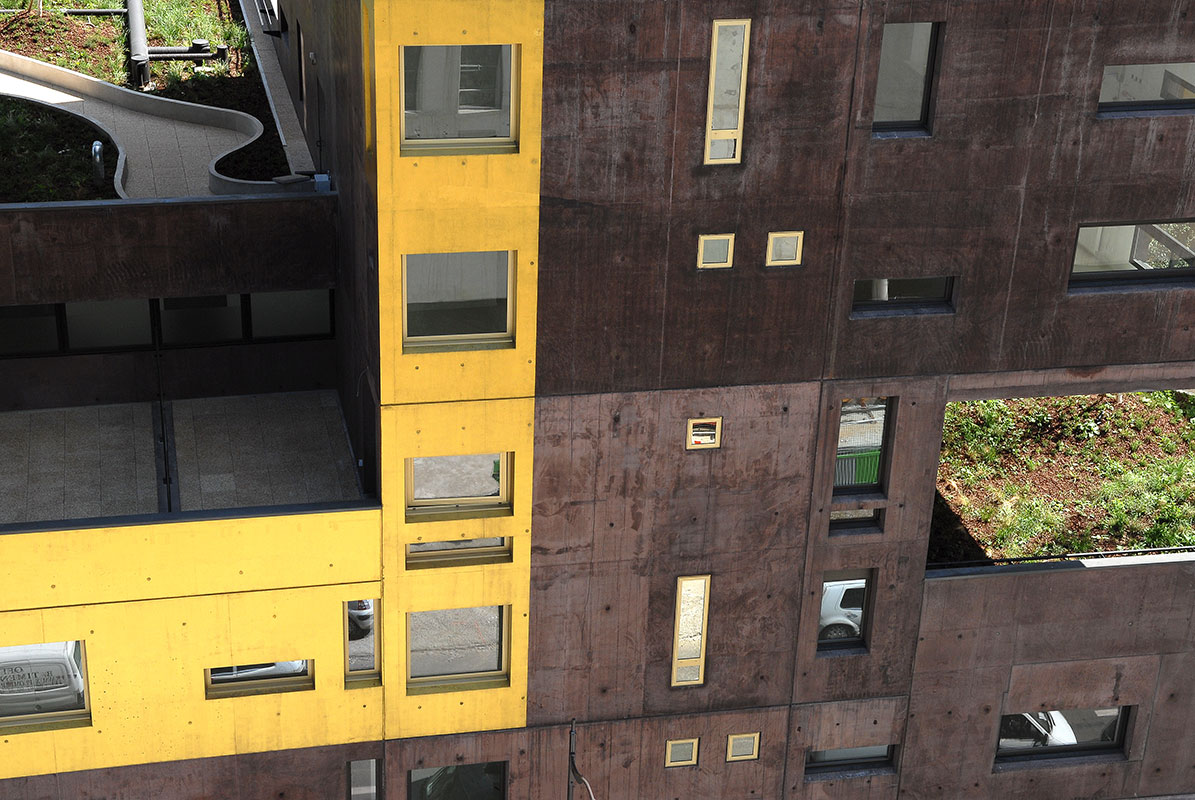 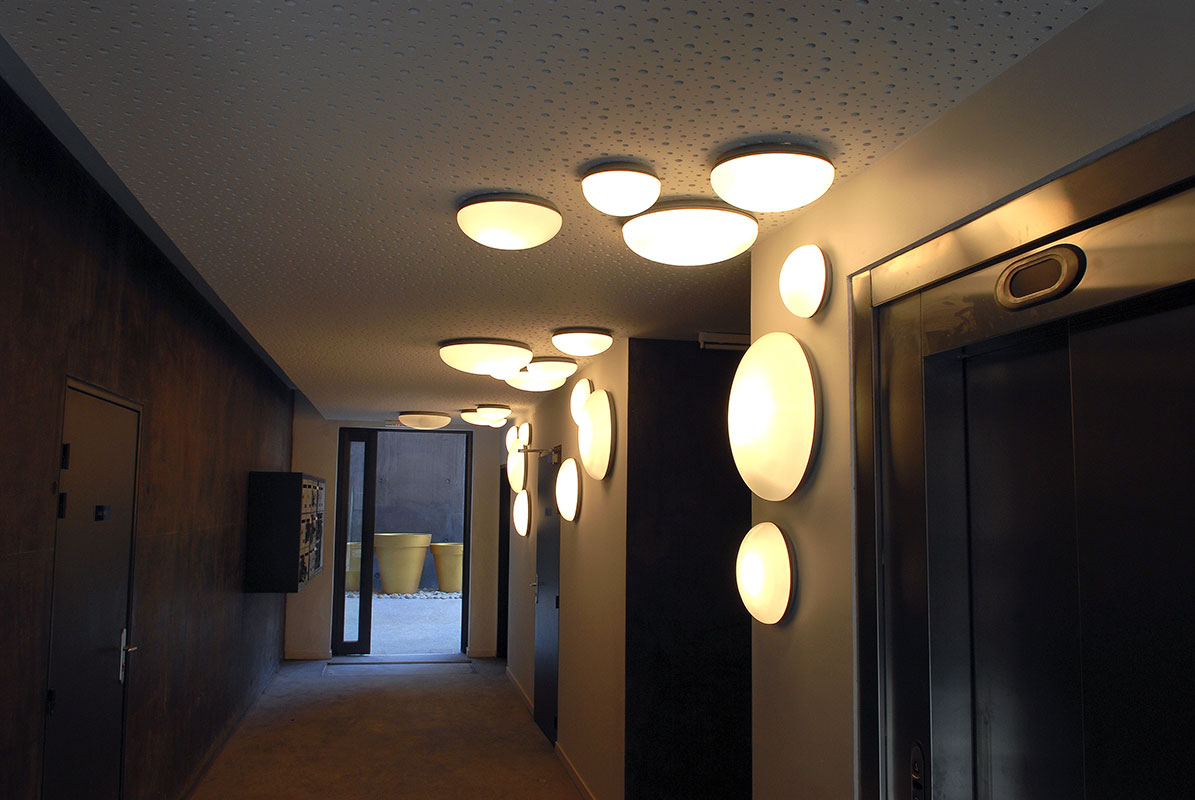 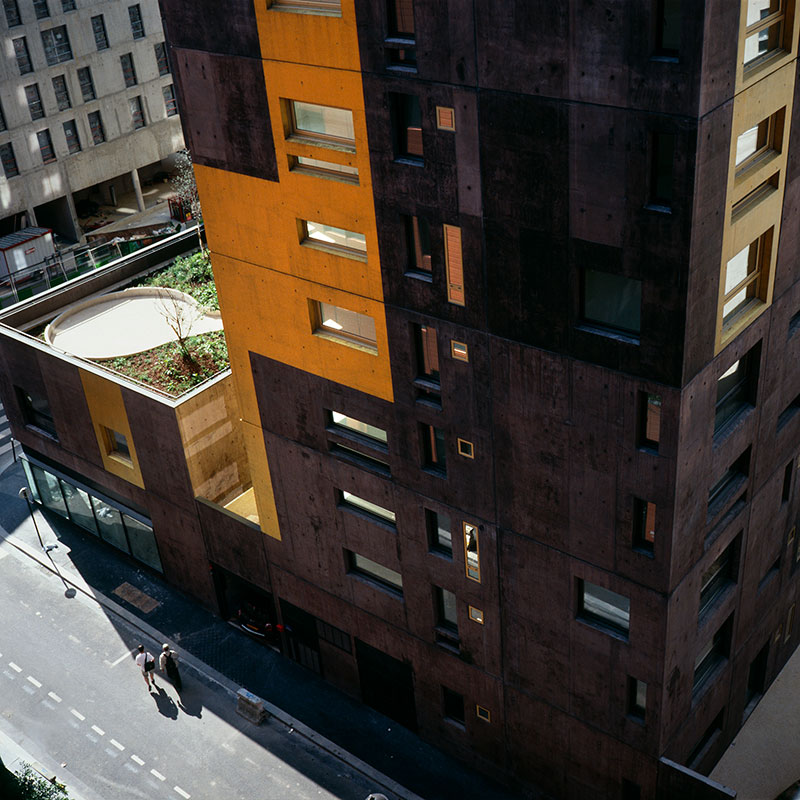 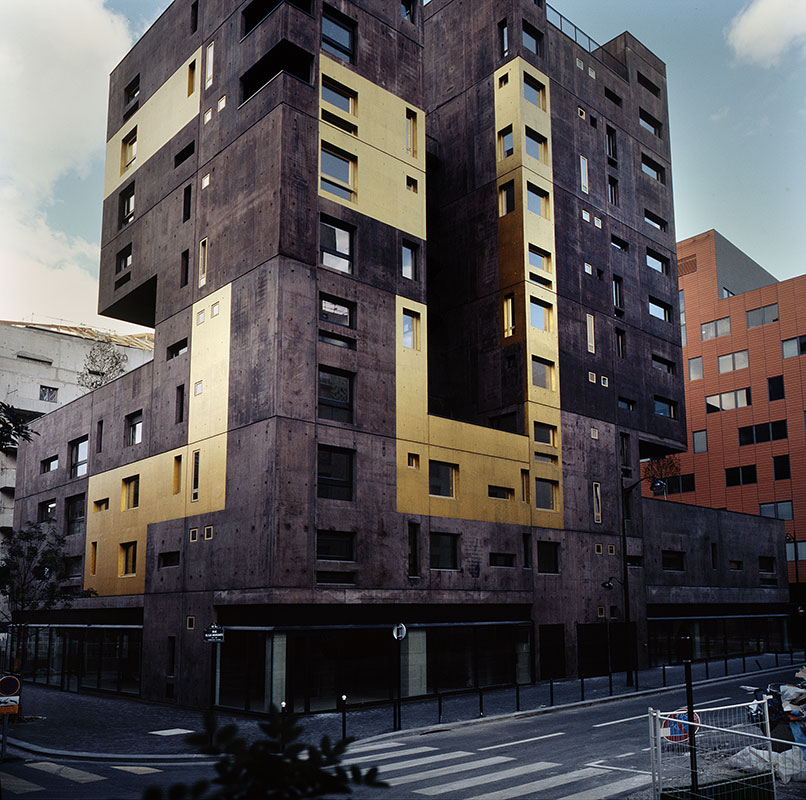 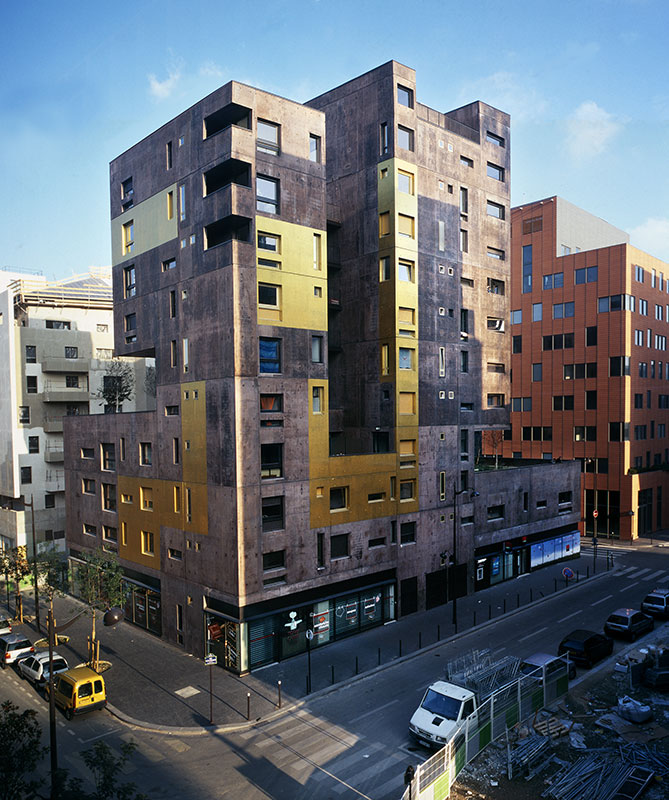 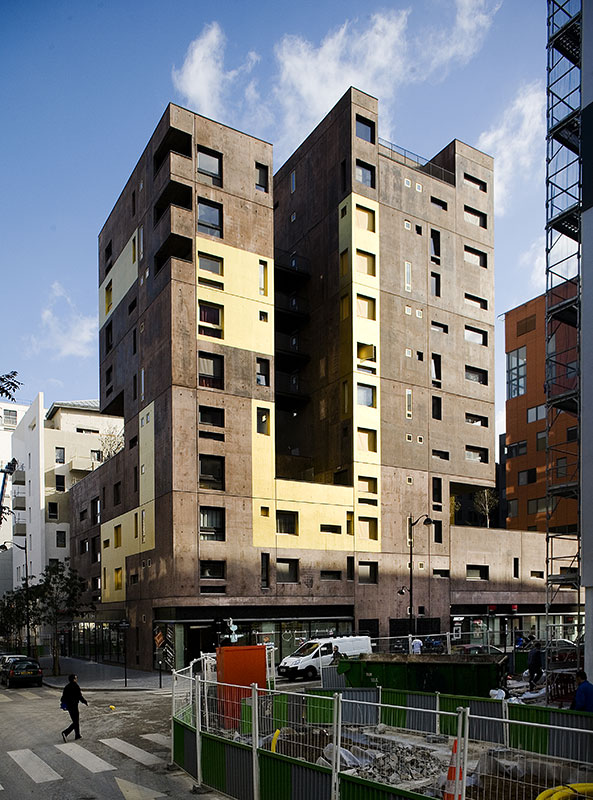 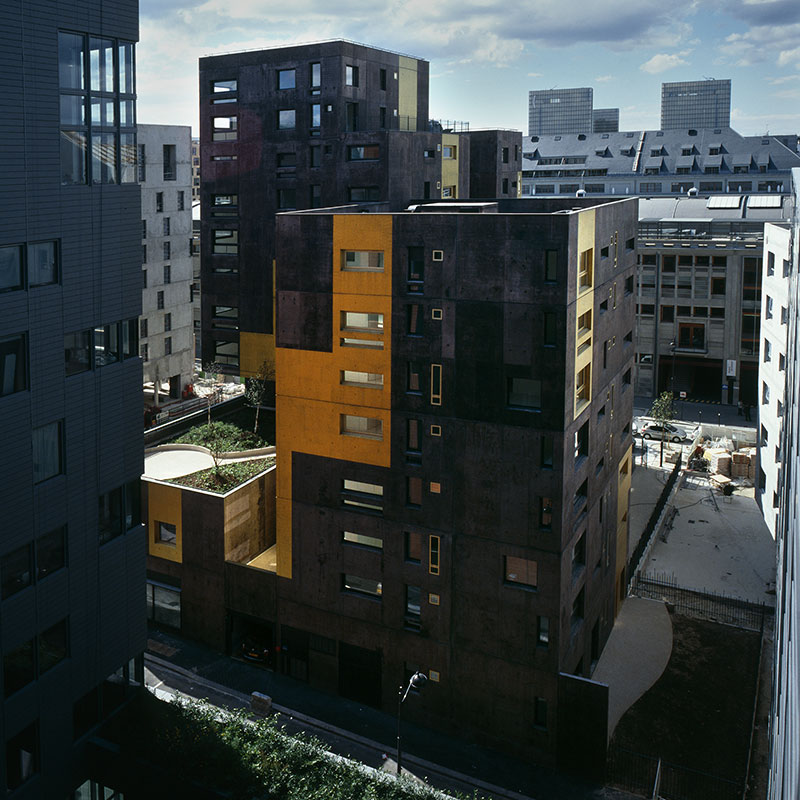 This project is not an isolated architectural mission, it contributes to the urban ambitions of the Masséna district in the 13th arrondissement of Paris. Each new construction is an additional milestone in the extension of this “3rd age” town.

Based on the principles designed by Christian de Portzamparc, the project emerges, develops, takes shape to enhance its simplicity with its own specific elegance.

The facade overlooking the street extends in strict alignment like a cheesewire. The overhangs, the recesses, the compositions of terraces and a crevasse structure the expression of the blocks forming this architectural complex, allowing the neighbouring buildings to benefit from the “open island hub” of the development plan.

At the crossroads of the various traffic axes, this minimal structure imposes its inertia through its deep and sombre bulk. Self-compacting coloured concrete adds a finishing touch to the corners, enhances the beauty of the canvas formed by the windows, the majesty of the design and its pure lines. The large glazed facades of the ground floor confer an impression of immateriality, the structure remains absent from this composition and a large hollow joint which accommodates the solar protection of the future occupants bestows a certain sense of levitation on the various volumes.

The facades unfold like a large graphic composition, generous and scaleless. The notion of floor levels is concealed, the rhythms of the openings are systematic and surprising. The inside is echoed by precise, nearby or far-off frames, profiting from the panoramas offered by eastern Paris.

As delicate as a butterfly wing, a metal tape running between the various volumes creates a special atmosphere catching the light, the reflections. The building is reflected and reflects a tone, a luminous spectrum. Time is on stage.

Ornamentation is banned and the omnipresent nature springs unexpectedly from the roofs of the various volumes, with an abundance of plants and trees.

Passers-by dream when looking up towards these accessible terraces which form this new “green” Paris, close to the river Seine and large cultural and educational infrastructures.

Rejecting the limitations of style and representation archetypes, this building suggests a critical architecture, whose modernity is essential for a new regulated urbanity in an open, generous, ecological and social metropolis.