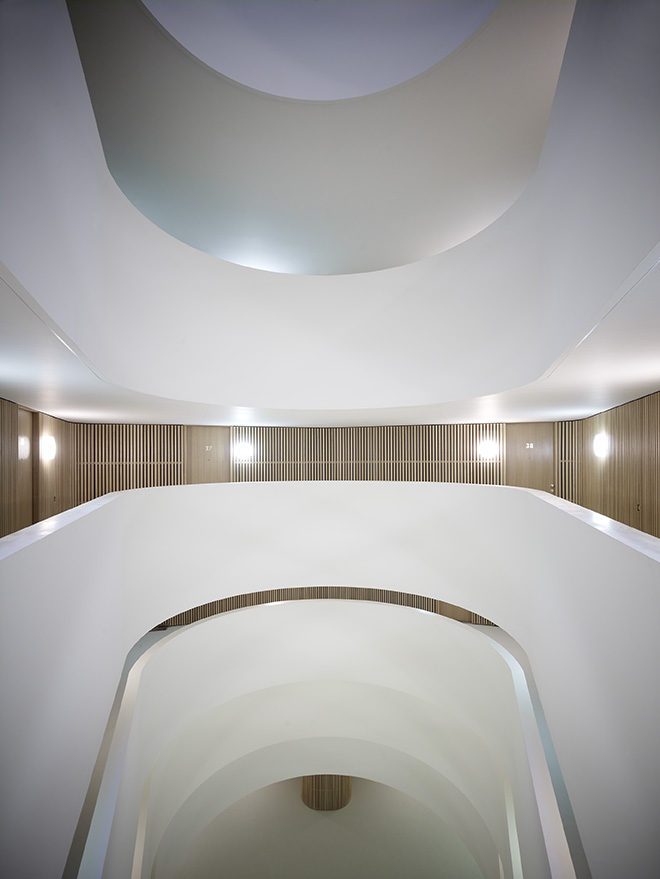 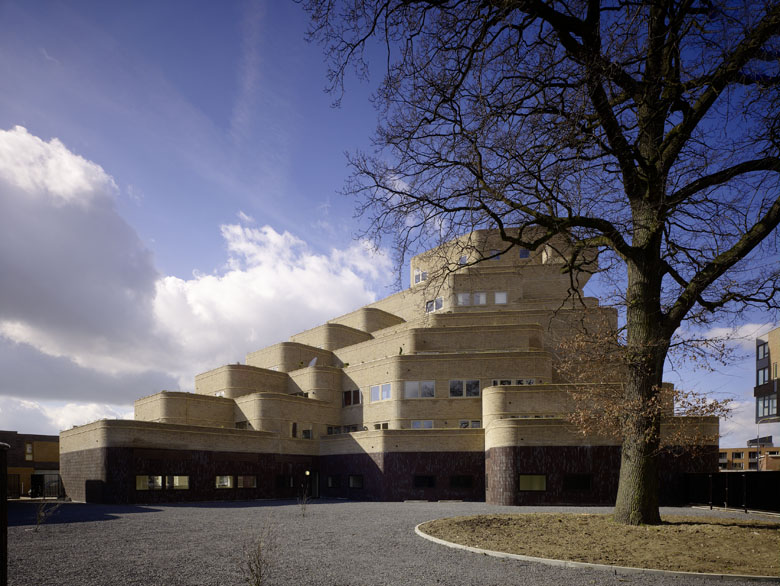 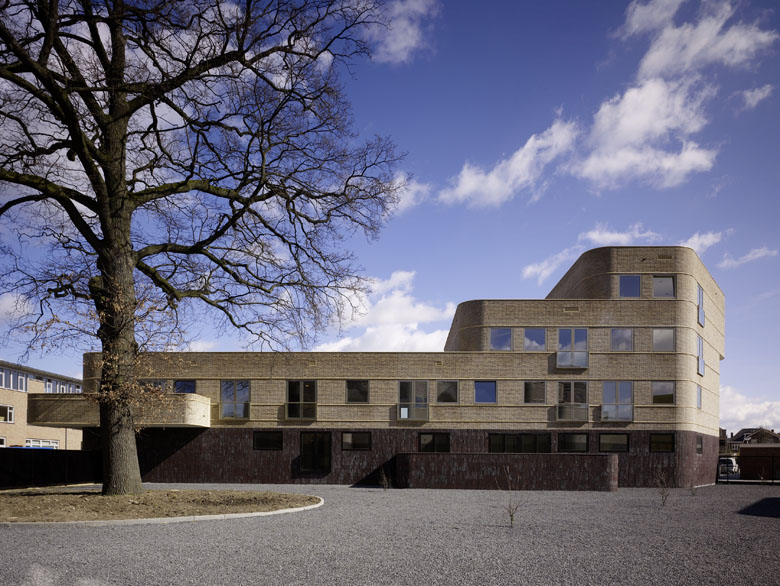 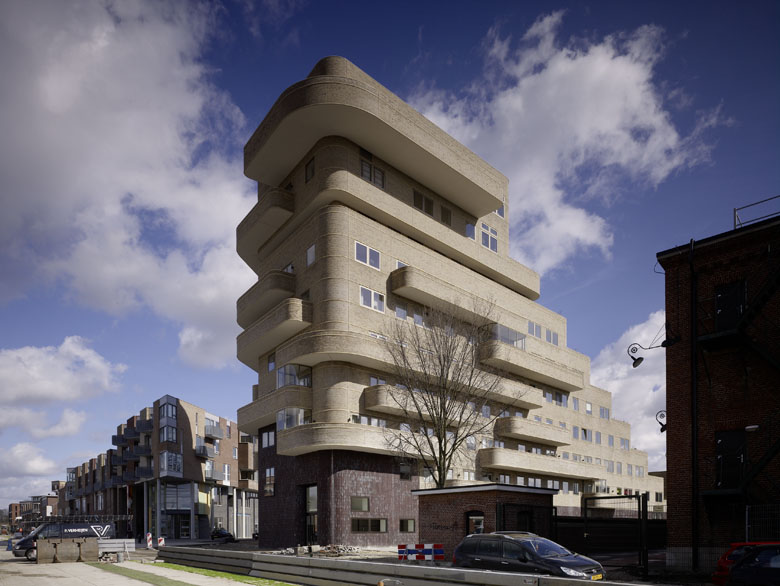 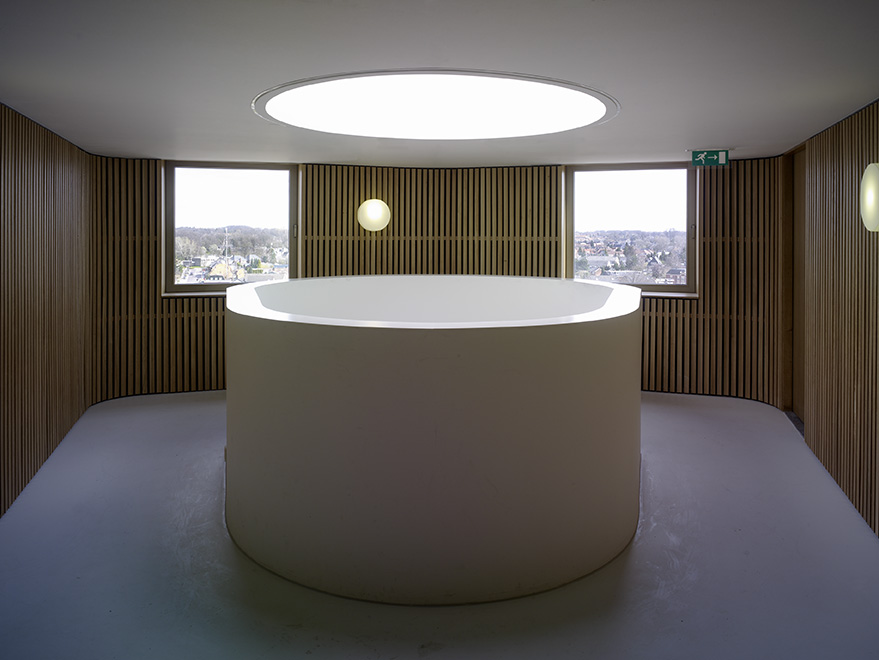 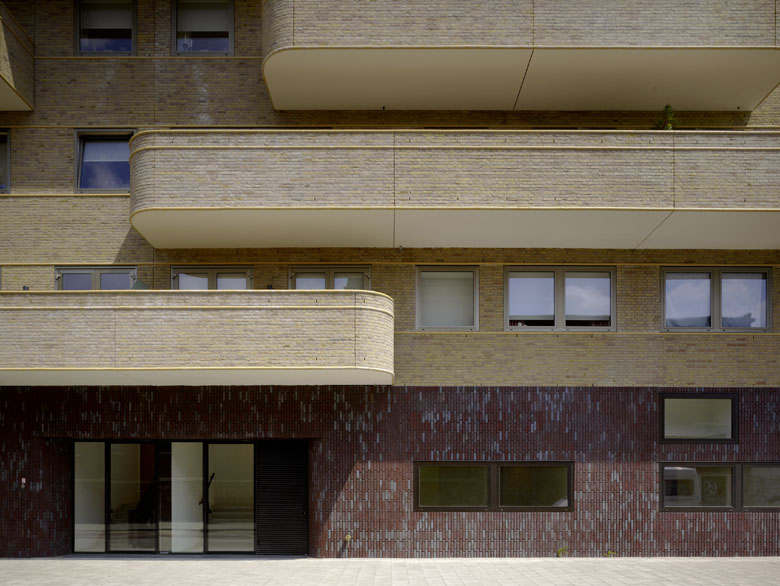 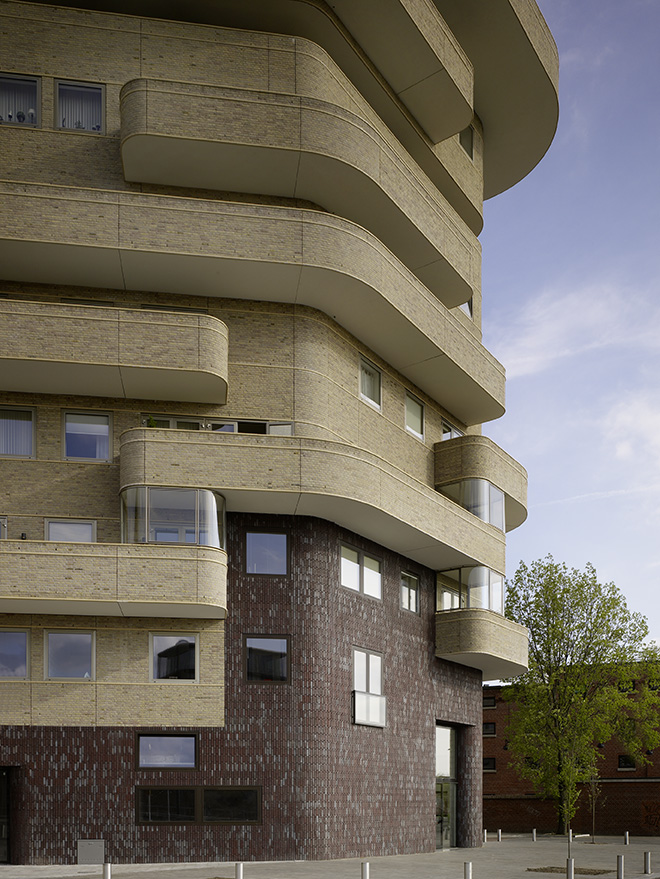 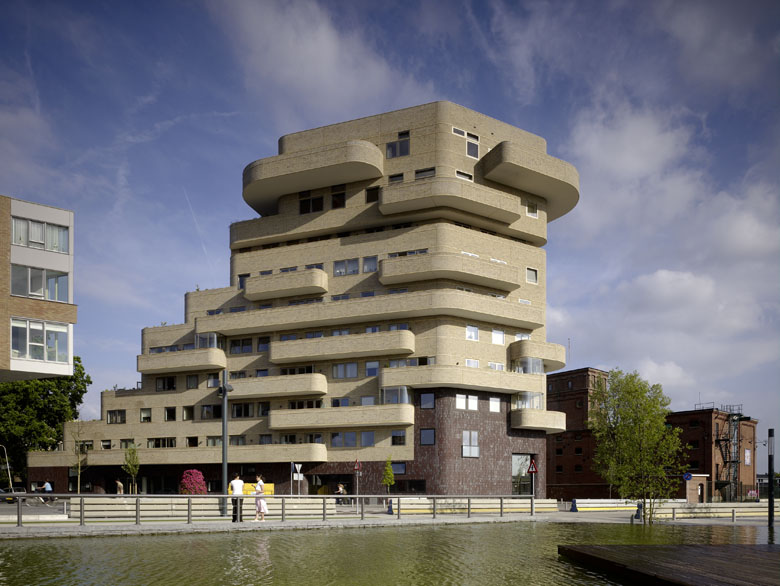 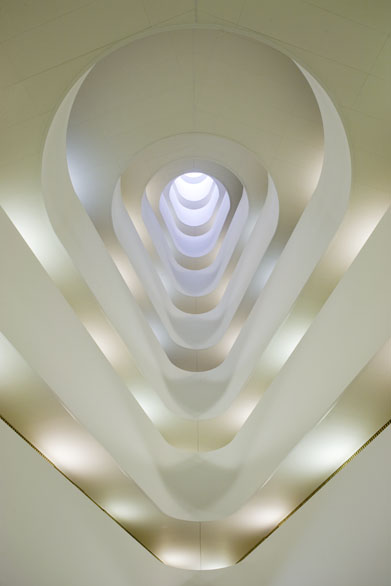 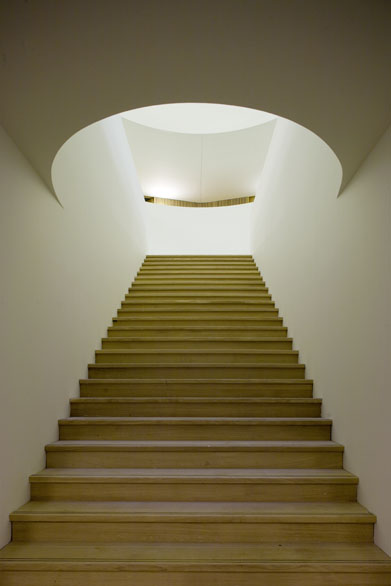 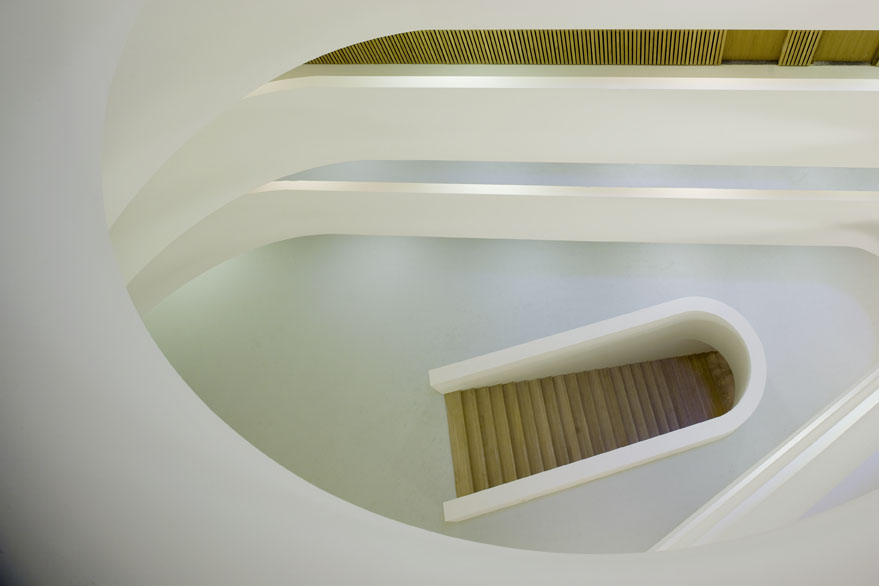 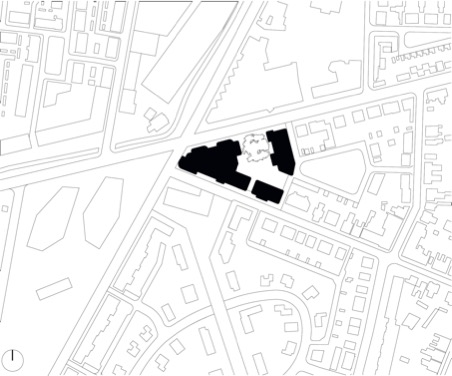 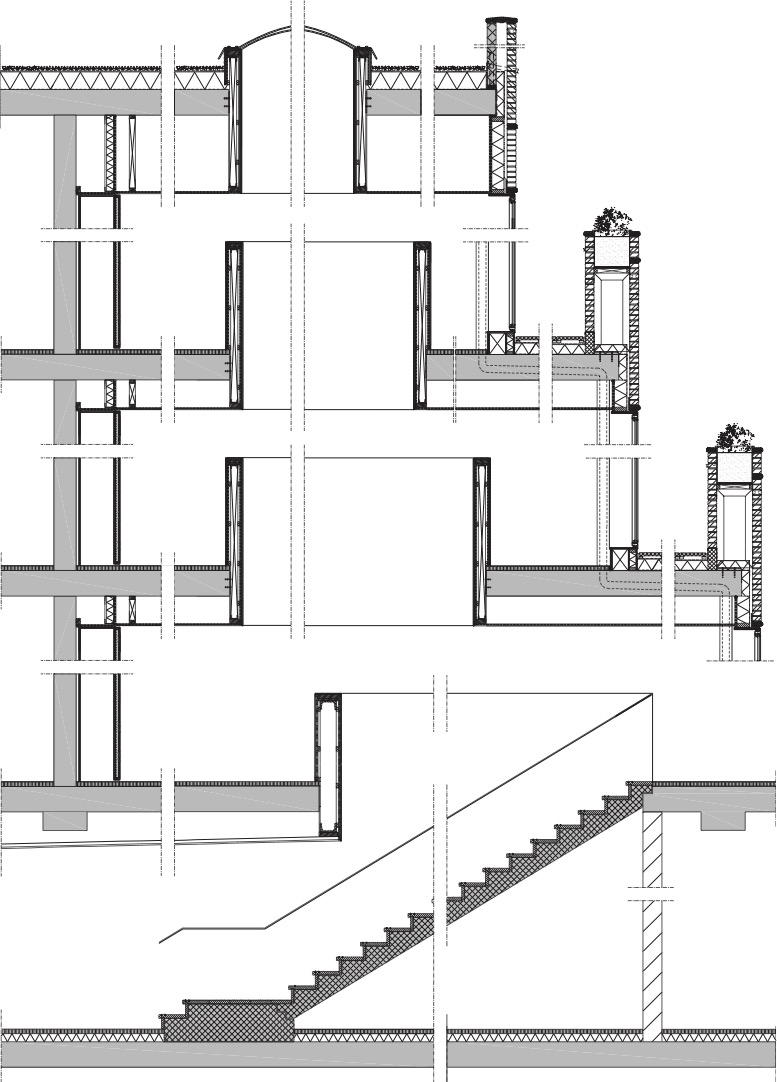 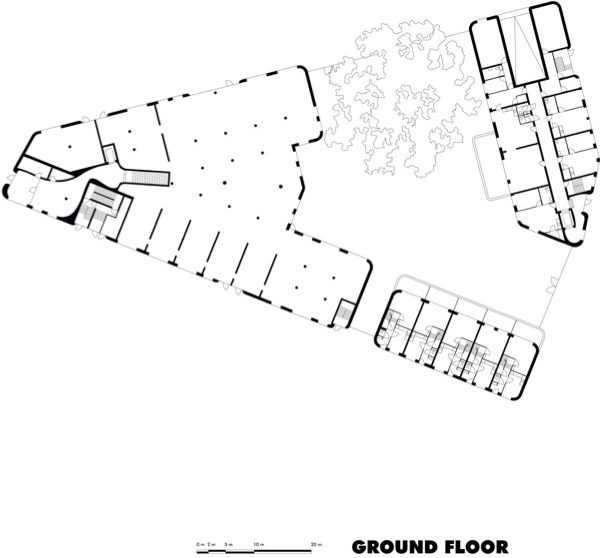 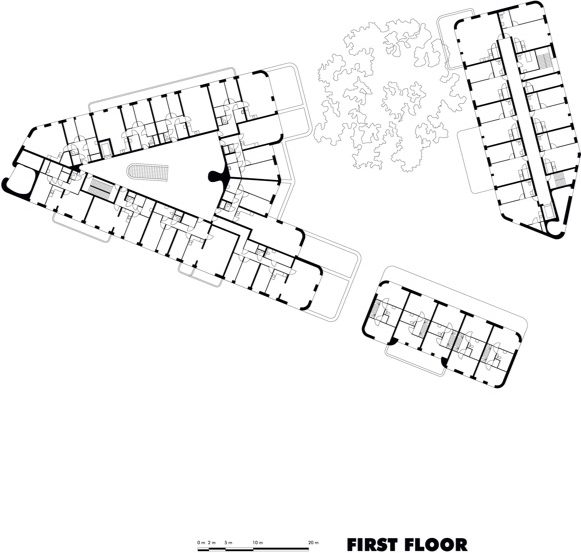 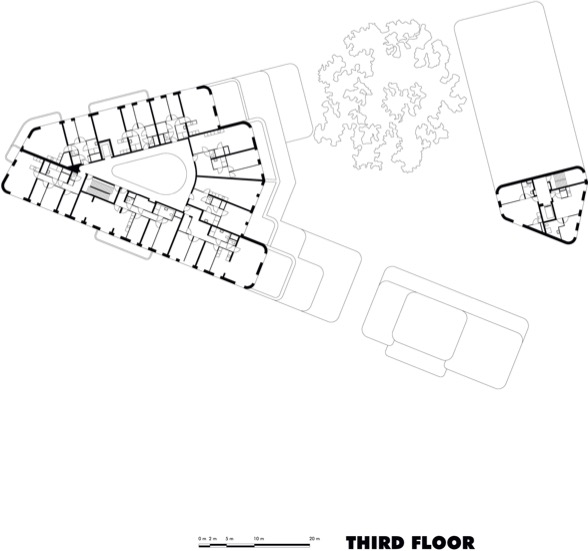 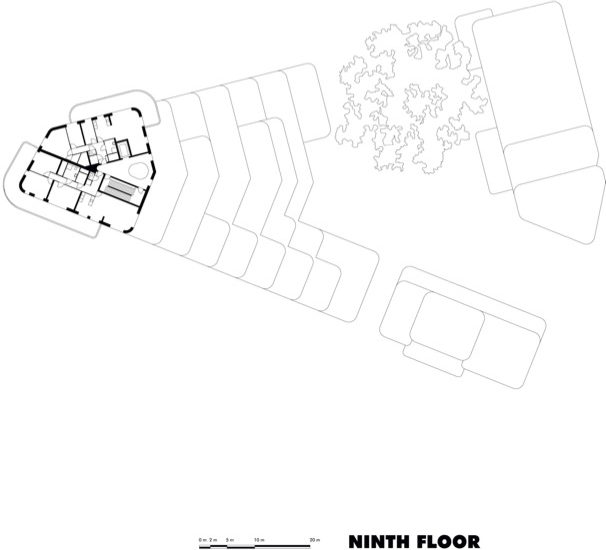 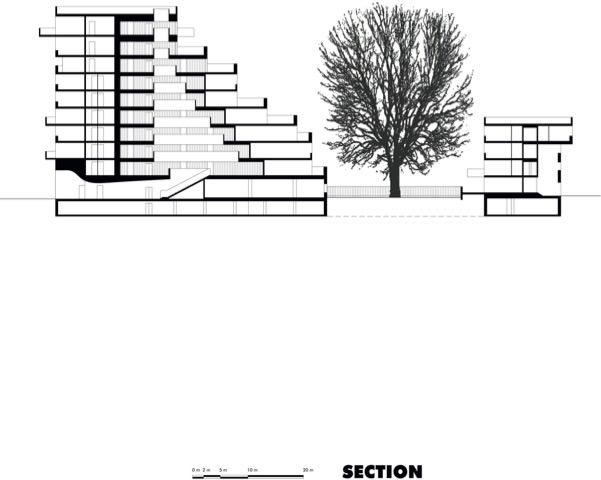 Since the completion of De Eekenhof Enschede is able to boast an exceptional new building. This new structure, a conspicuous architectural statement, is remarkable in many respects. Firstly thanks to its prominent position it is at the heart of Roombeek, a new residential district which has literally risen from the ashes of the area destroyed by the 2000 fireworks disaster (and which won the 2007 ‘Golden Pyramid’ award for excellence in architectural commissioning). Its unique character can be attributed to its specific location at the intersection of several important roads, pedestrian routes and lines of sight. The building is positioned at the junction of two key axes intersecting the district, Roomweg and the Lonnekerspoorlaan. When approached from the town centre on foot it stands in the line of sight of the pedestrianised Museumlaan, which is part of the new “cultural axis” being developed by the local municipality. Above all however, the building commands a great sense of presence due to its highly sculptured form.

Its expressive drama, misinterpreted by some as expressionism, results from a combination of three factors: movement, growth and dynamism.

The brick-built apartment complex, which is composed of three distinct sections, is situated on a triangular plot. The two longer sides of the plot are bounded by Roomweg and by Schurinksweg, the latter facing the historic Balengebouw (bale store), which was built in the 1950s for De Bamshoeve cotton mill and which will eventually house the Jan Cremer Museum. De Eekenhof itself, consists of a main building and two smaller ones, positioned in such a way as to preserve an old oak tree on the site. There are several advantages to dividing the project into three parts. Firstly, this division ensures that the inner courtyard is visible from the surrounding streets. Part of this courtyard is to be used by the health centre on the ground floor of the main building, whilst the rest is open to the public. Another advantage is that it prevents the complex from overwhelming the smaller houses opposite the shortest side of the triangular plot. The main building’s “stepped” facade on this side – like the dark vertical brickwork at ground level – illustrates how De Eekenhof has been designed in empathy with its surroundings and with respect for residents living in the adjacent homes.

This stepped facade, together with the long balconies running along the sides of the main building, give the design another of its essential qualities: dynamism. When approached from the east, along Roomweg or Schurinksweg, the “staircase” effect makes the building appear to grow slowly but surely towards a climax, which is clearly but harmoniously accentuated by the prominent projecting balcony on the top floor, a feature that has deliberately been oriented towards the heart of the reborn neighbourhood. The sense of movement is further stressed, and indeed guided, by the extended balconies on both of the building’s longer sides. Imposing when seen from the front, yet almost unassuming at the rear, it is actually a structure with two quite different faces.

This distinctive form is reminiscent of both a mountain and a wave, although it is the dynamism of the latter that provides the best comparison. The building is essentially a carefully composed, captured and petrified movement. The rhythmic pattern of the outer walls, their horizontal lines emphasised by ceramic tiles, taken together with the “constriction” between the seventh and eighth floors and the particularly prominent balcony at its crest, all contribute to the impression of a wave on the verge of breaking. But this dynamism is not confined to De Eekenhof’s external composition – it is reflected in other aspects of the design as well.

The design’s relationship with architectural history is certainly more active than passive. At first glance, it seems to owe much to the celebrated Amsterdam School, with rounded, projecting brick balconies and numerous bay windows that appear to be a clear tribute to such projects as the residential blocks built by Michiel de Klerk on Vrijheidslaan in Amsterdam. However, unlike much Neo-Traditional architecture, these references have not been included out of a desire to please, to garner instant recognition or to court popularity; this is anything but a case of lazy imitation. Rather, the decision to incorporate these elements has been founded upon careful analysis. The stylistic references have been included for their iconographic significance, specifically their proven effectiveness in adding figurative movement – and hence architectural dynamism – to the building. But these elements also have the ability to communicate with their immediate surroundings – not only does this edifice guide traffic along Roomweg, it also interacts directly with the adjacent buildings. In other words, it is the explicit result of a dynamic and outward-looking concept.

That same dynamism extends, in a totally natural way, into the interior. Leading on from the main entrance, a corridor meanders past the lift and up a staircase to a central foyer on the first floor. Above, open all the way up to the ninth floor, is a flowing, organic space. This space, which narrows at each storey, culminates in a skylight that provides partial illumination down into the void. The visual effect here is reinforced by the white plastering of the balustrades and the application of vertical oak slats to the walls. Simultaneously expressing upward movement, both literally and figuratively, this is a space that simply has to be experienced, regardless of any actual utility.

All in all, then, De Eekenhof is an example of coherent and intelligent design derived from the three key elements referred to above: movement, growth and dynamism. Moreover, the design applies them in a manner that is entirely consistent with the successfully accomplished, overiding vision for the reconstruction of the Roombeek district, based on an urban development concept devised by Pi de Bruijn. Not only is De Eekenhof a significant and remarkable building on the strength of its own inherent qualities, but it is also set to become a landmark that both recalls this area’s troubled past and proclaims its future promise.