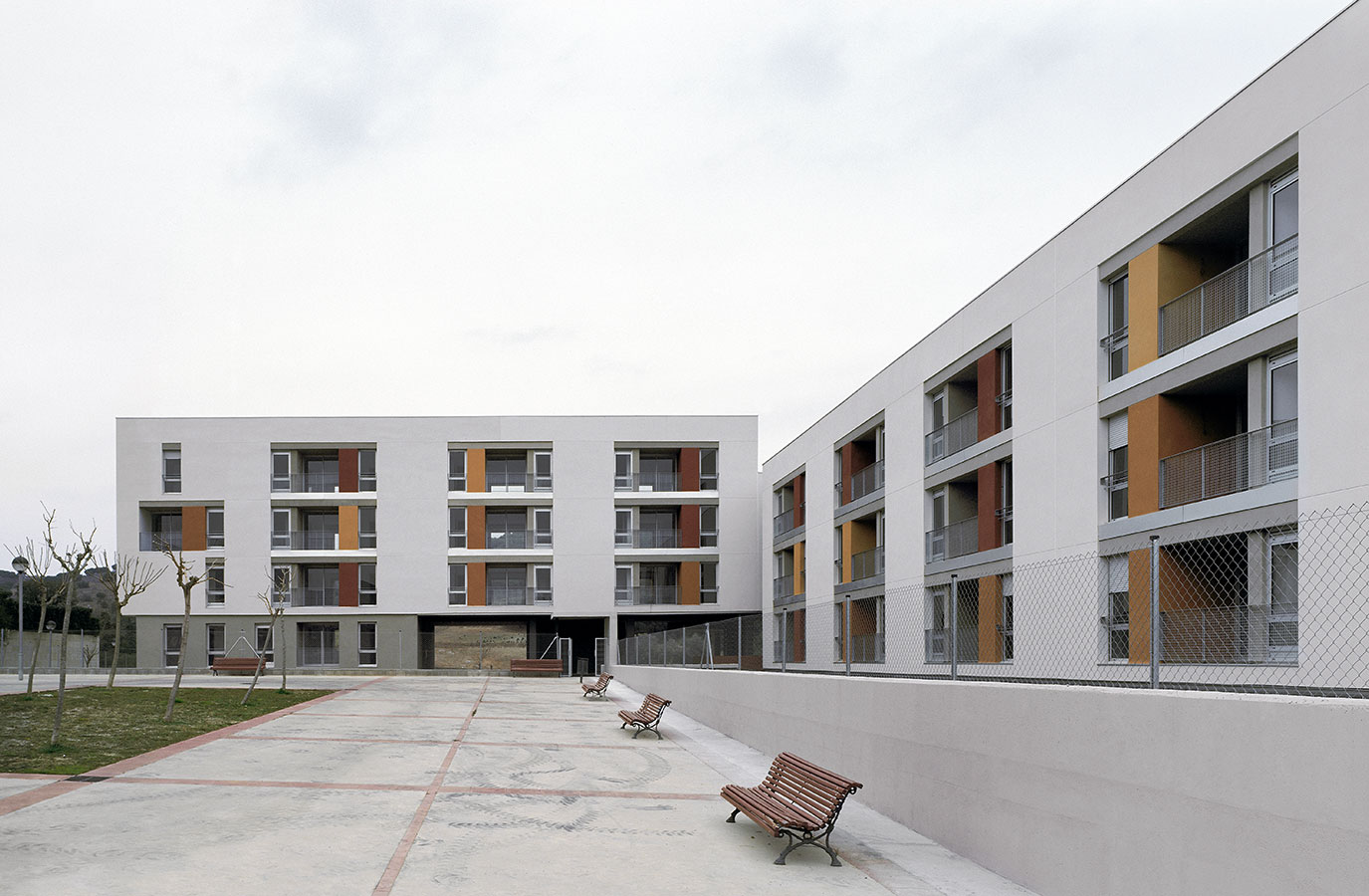 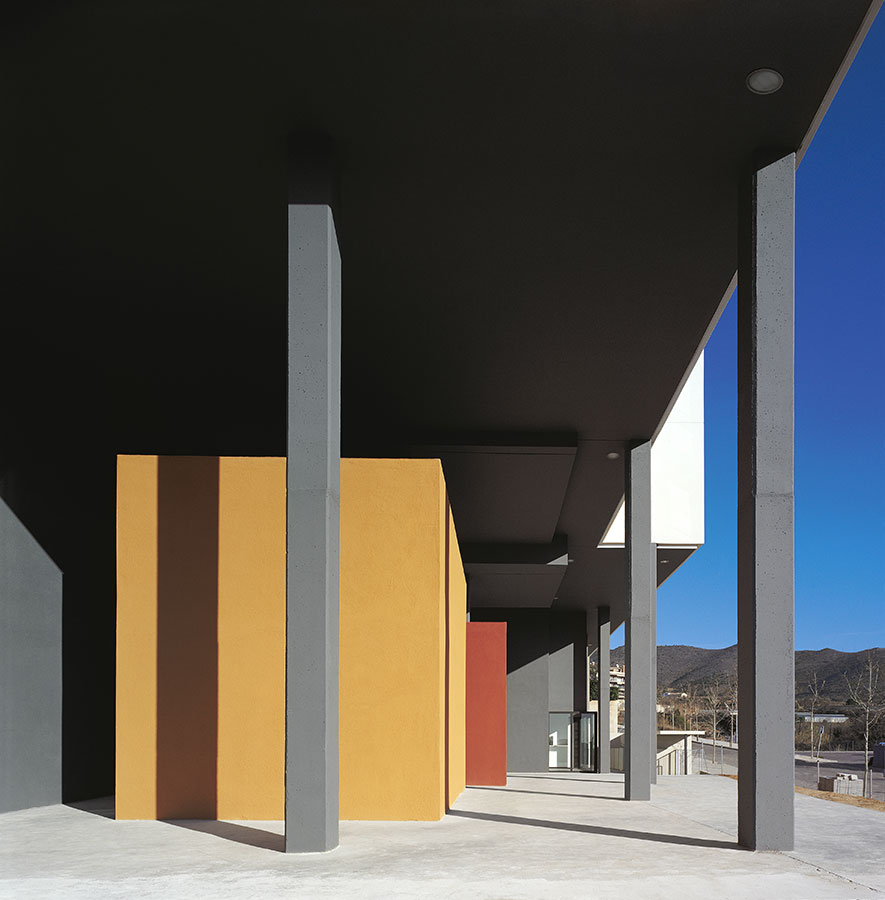 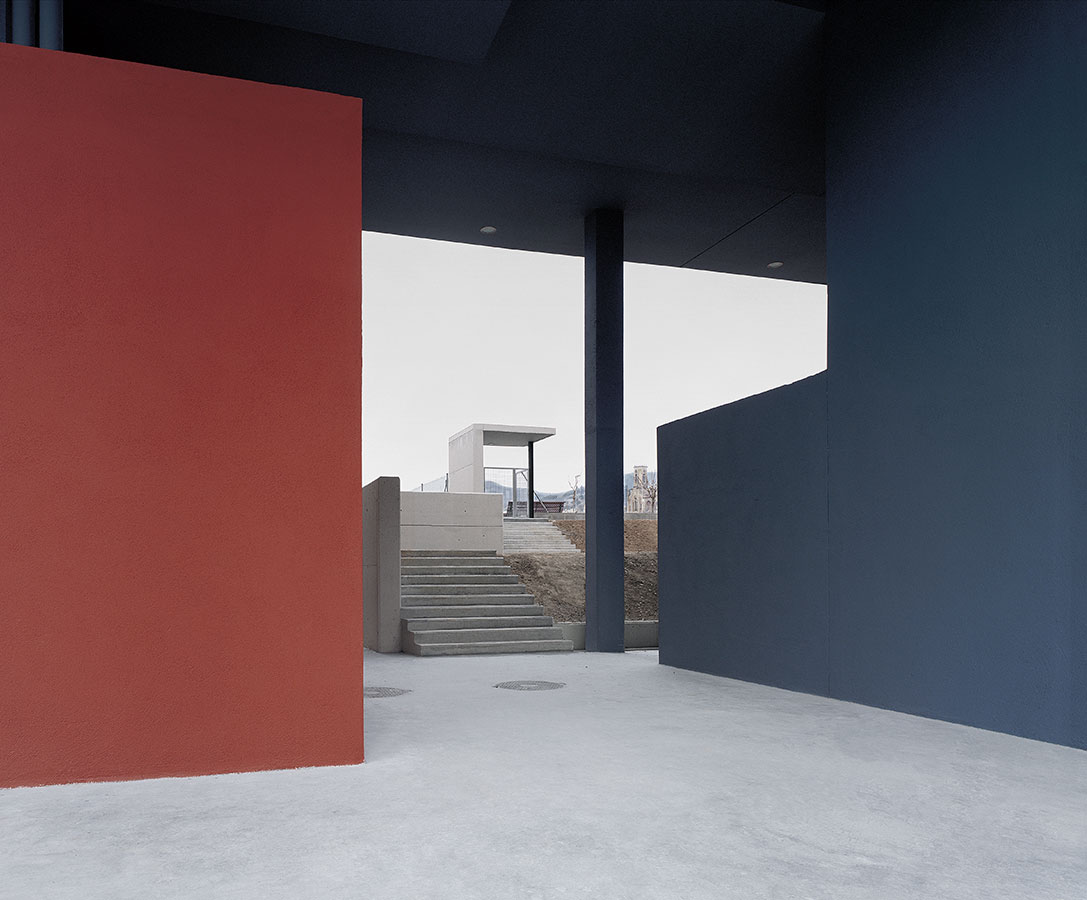 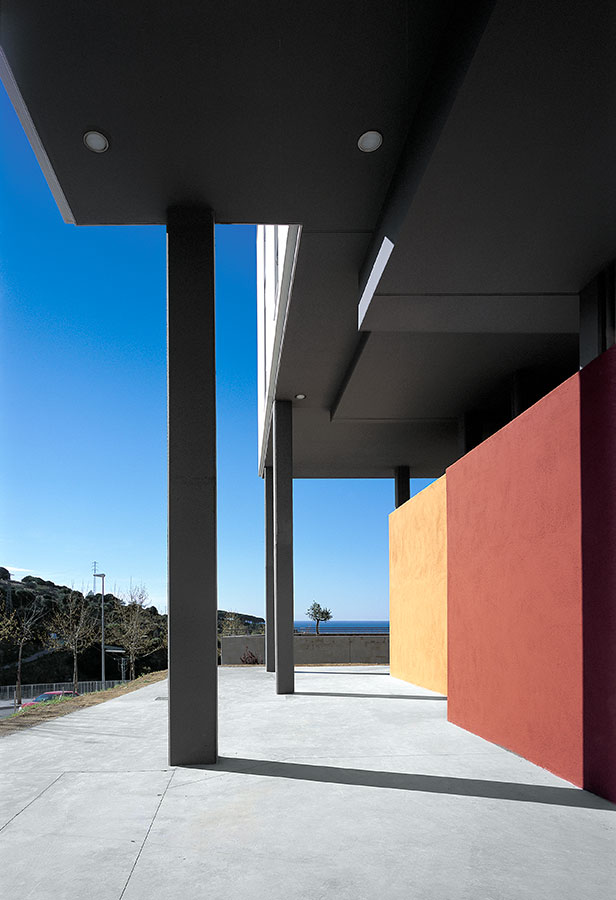 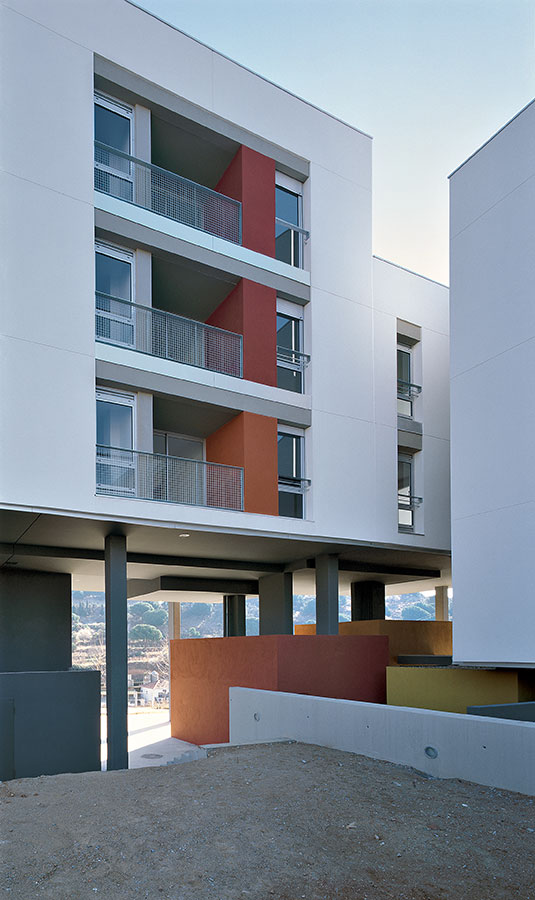 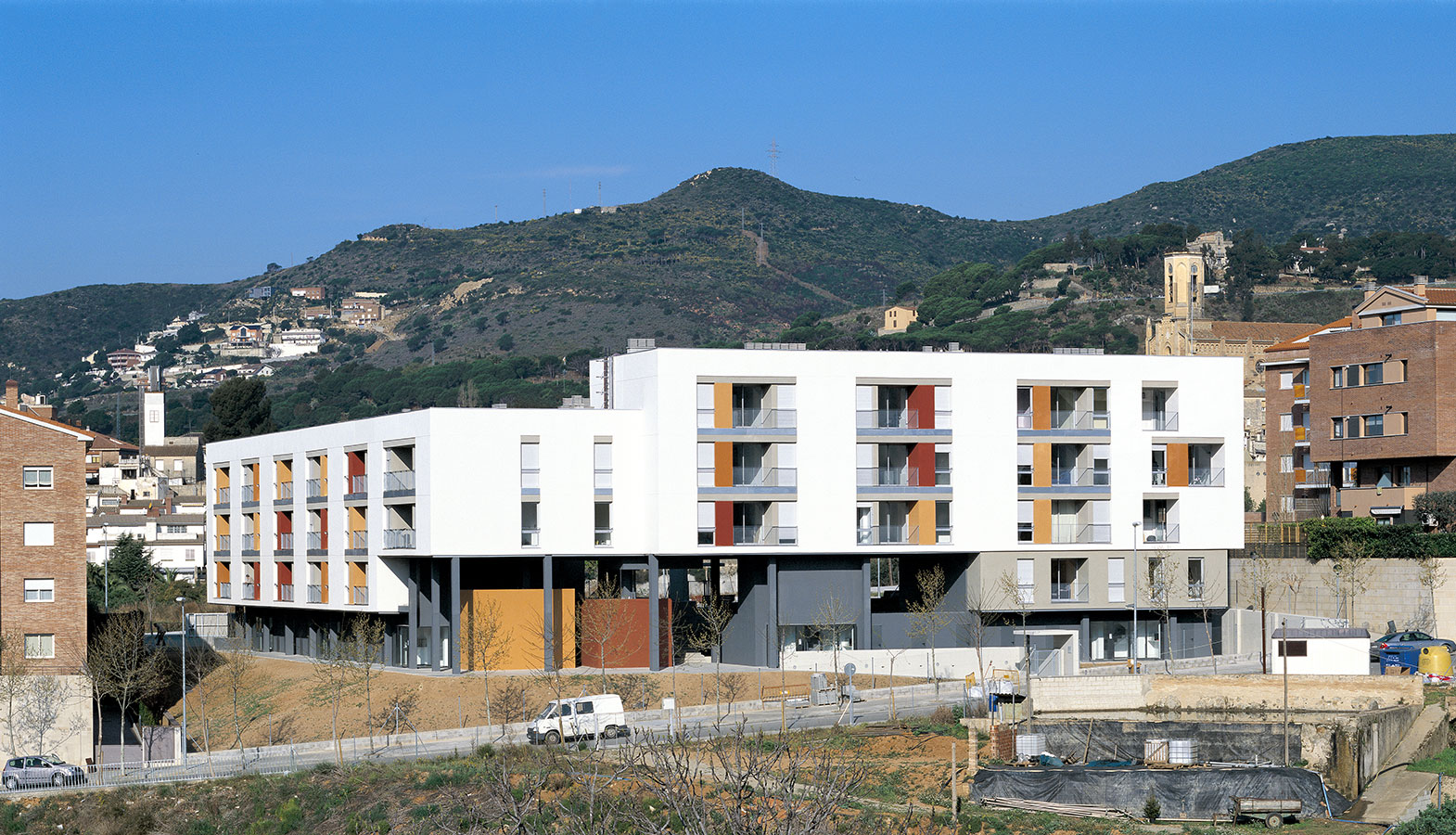 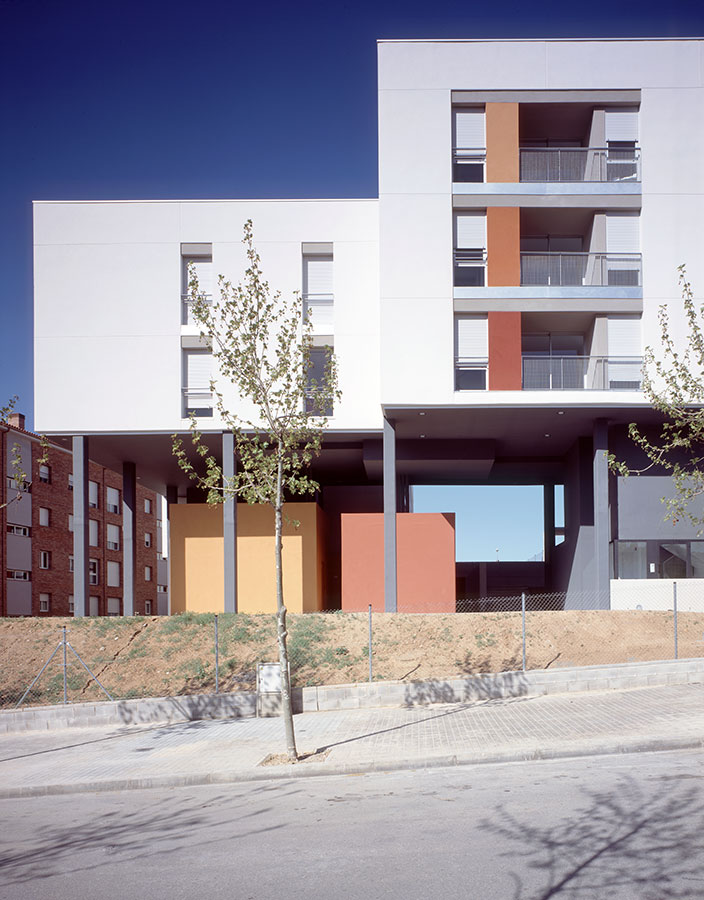 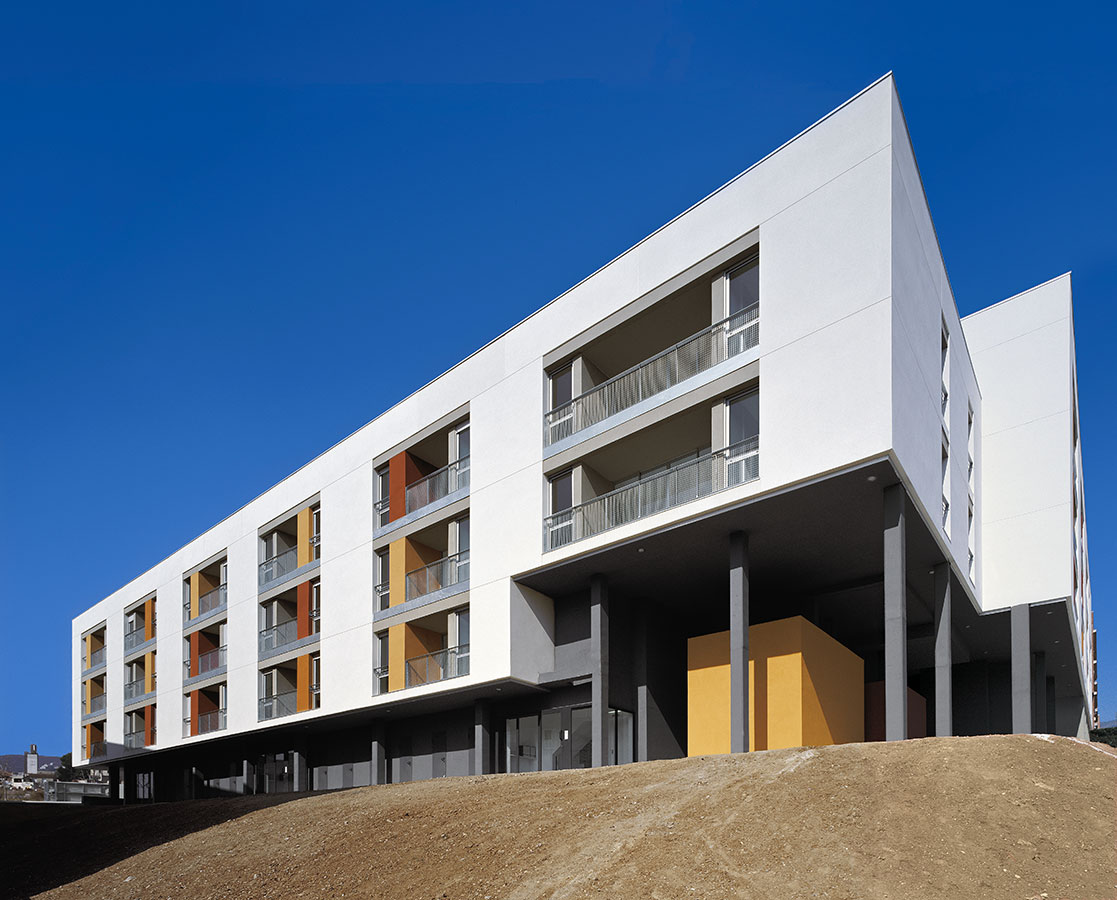 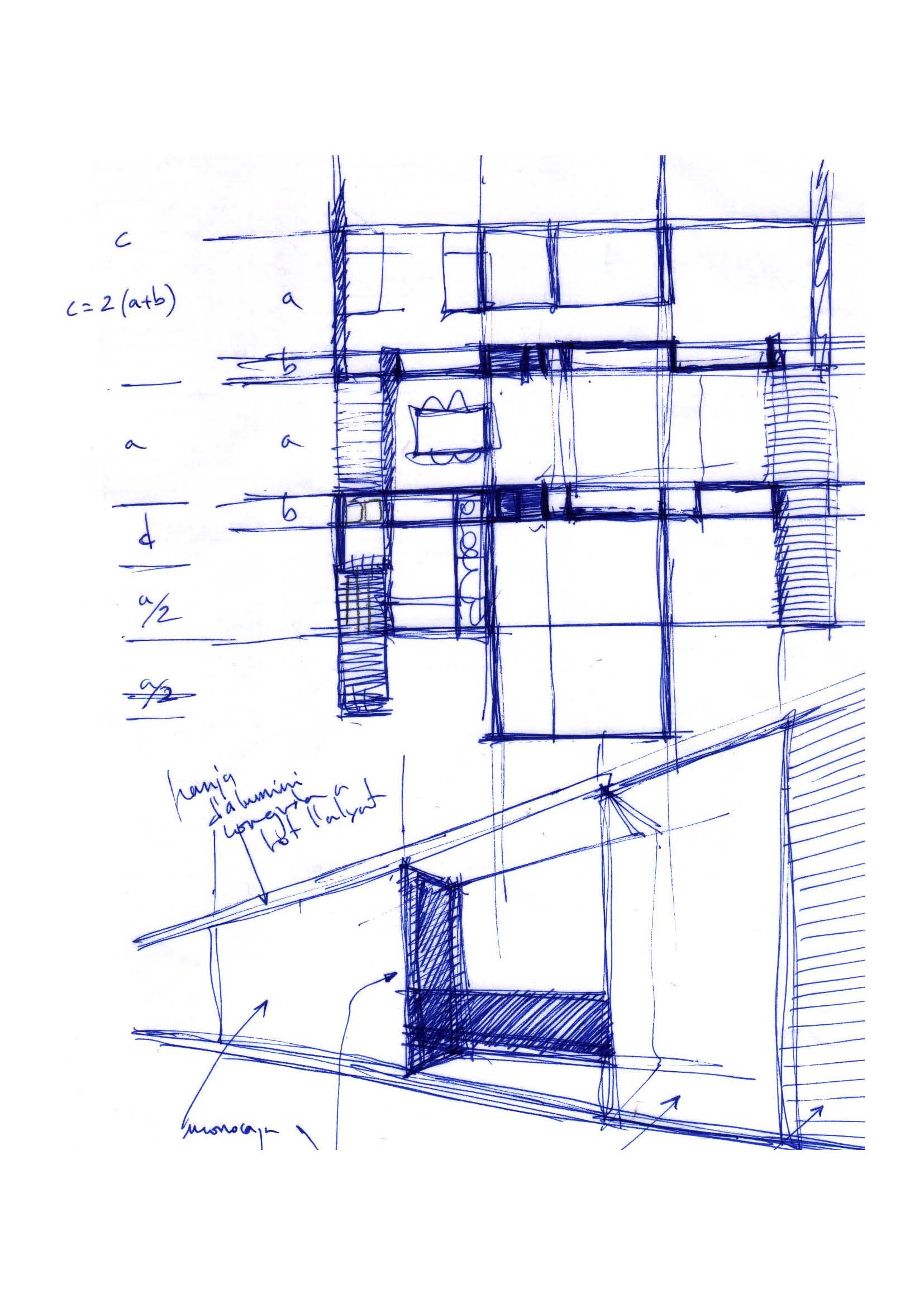 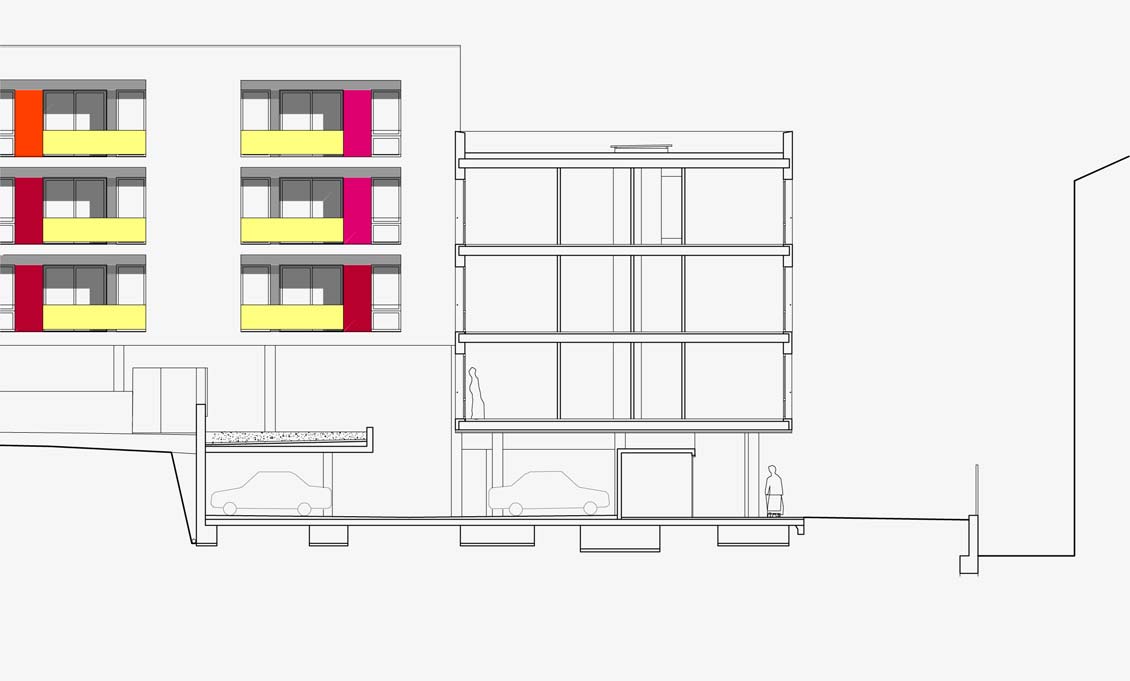 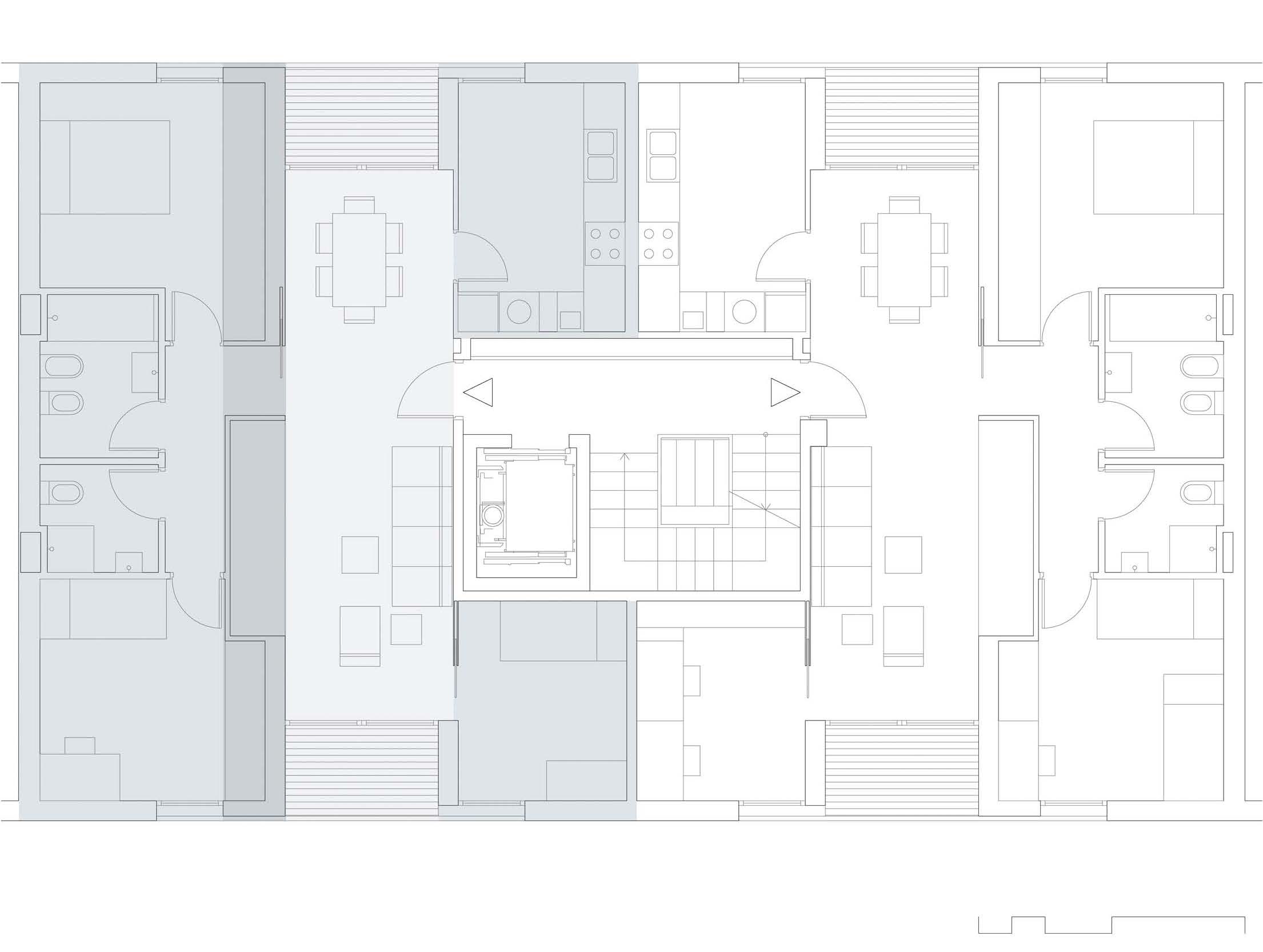 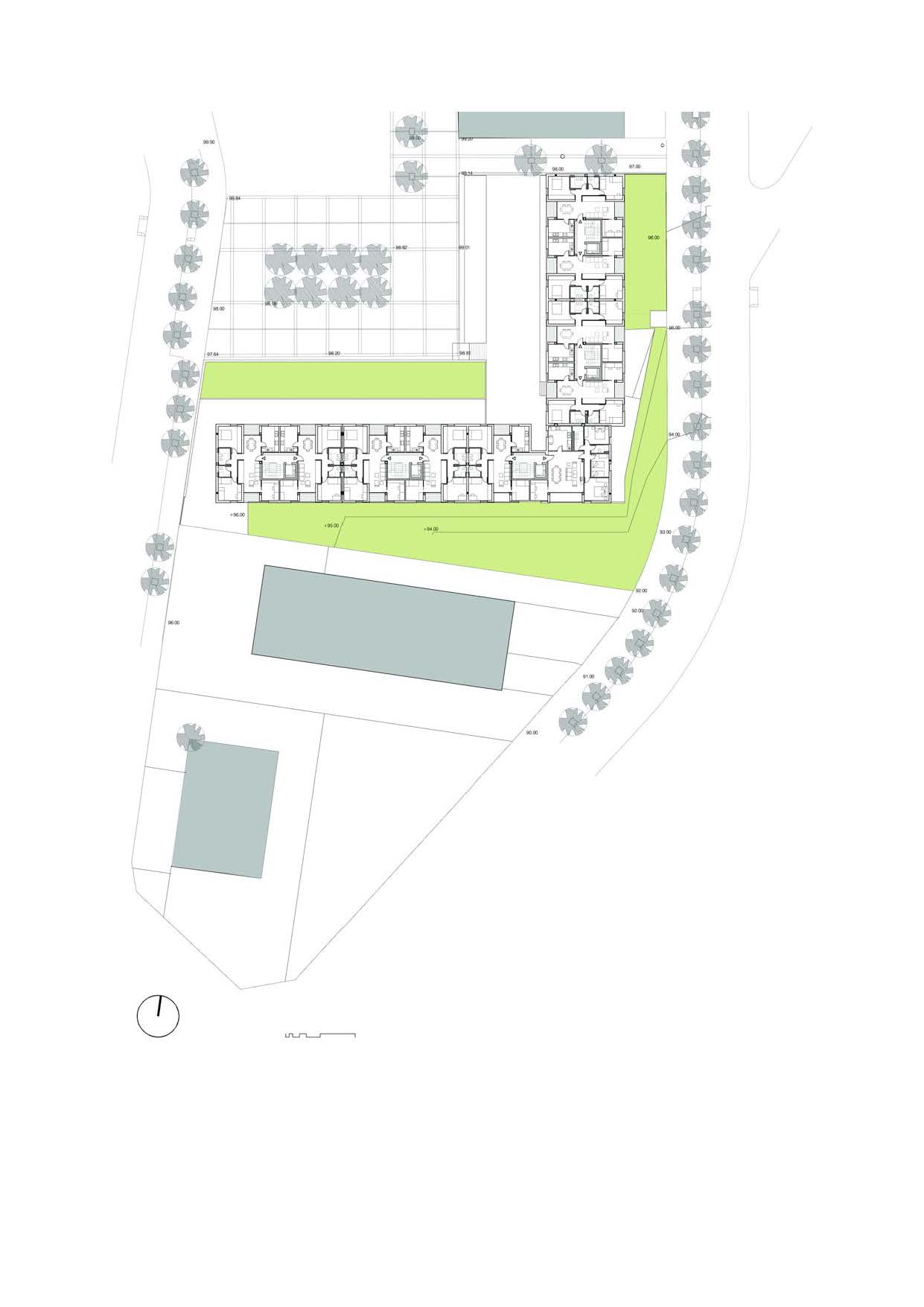 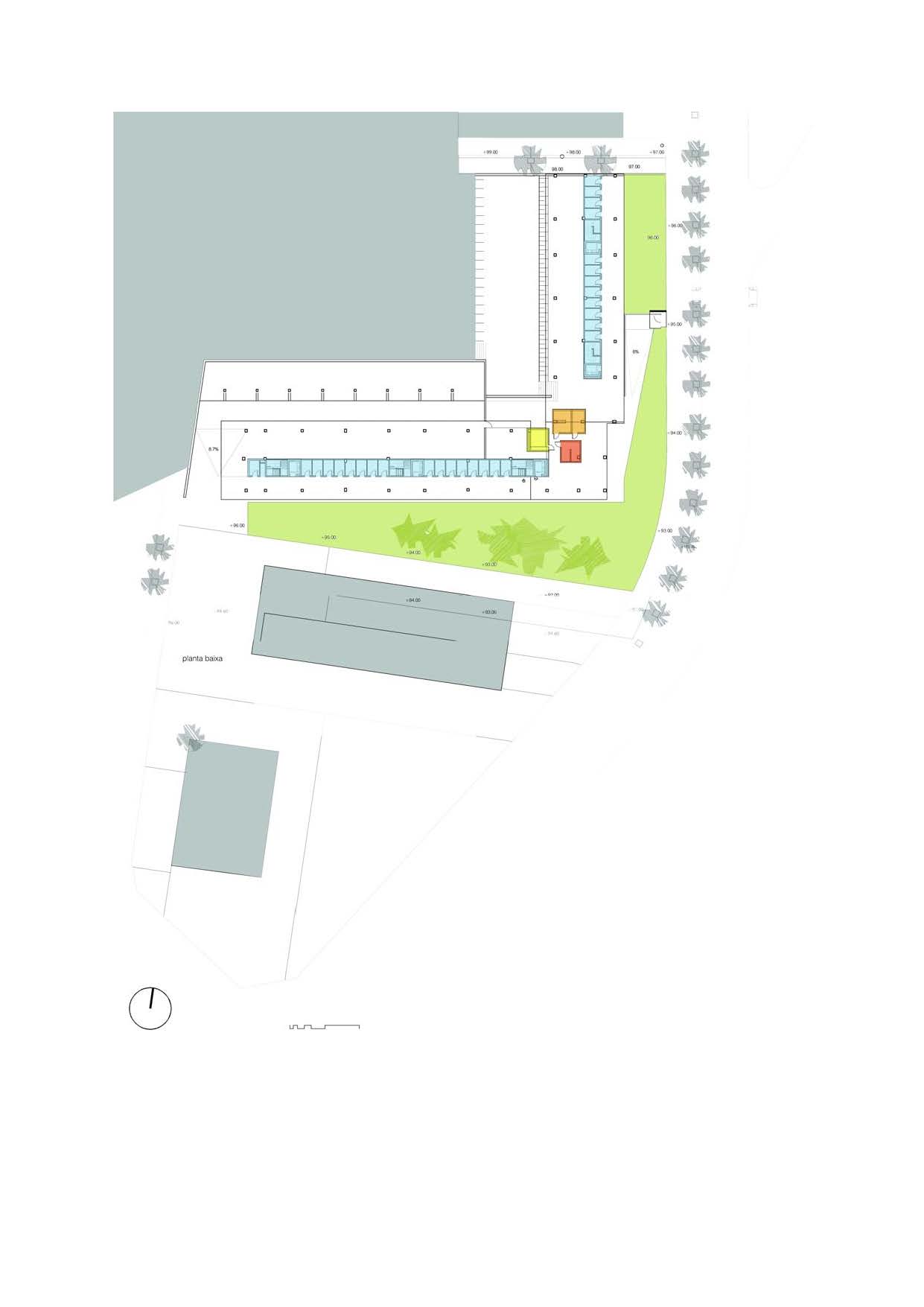 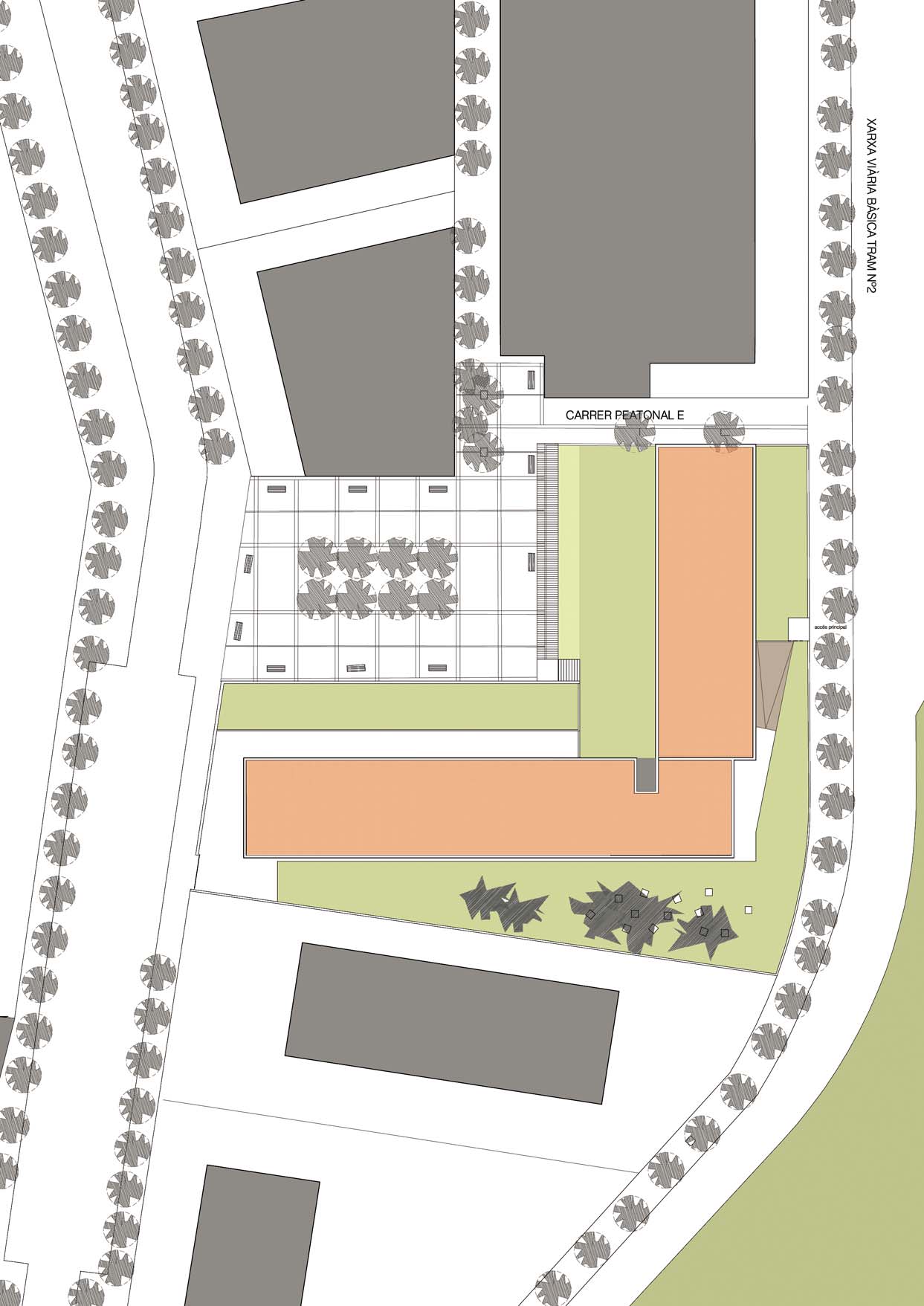 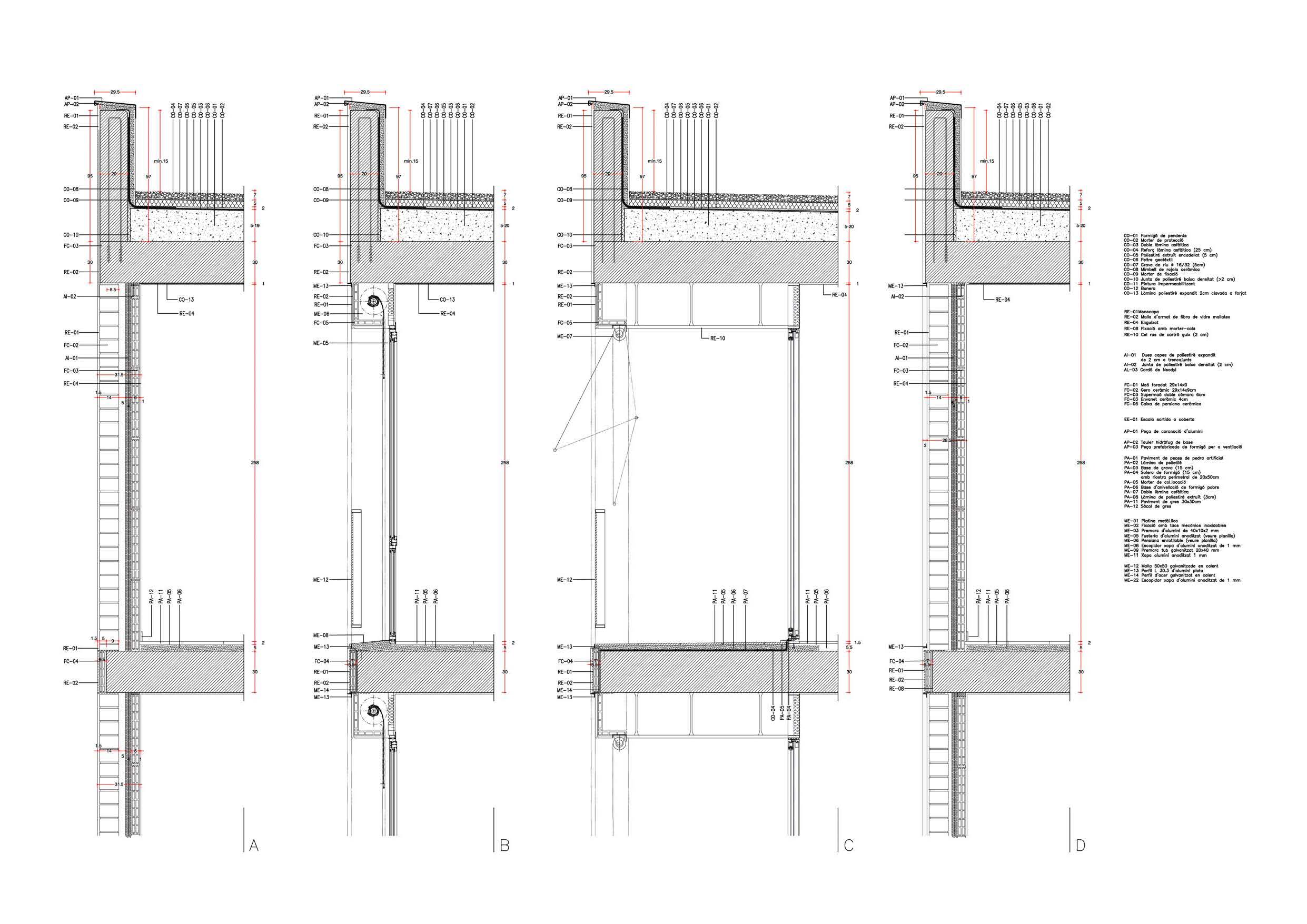 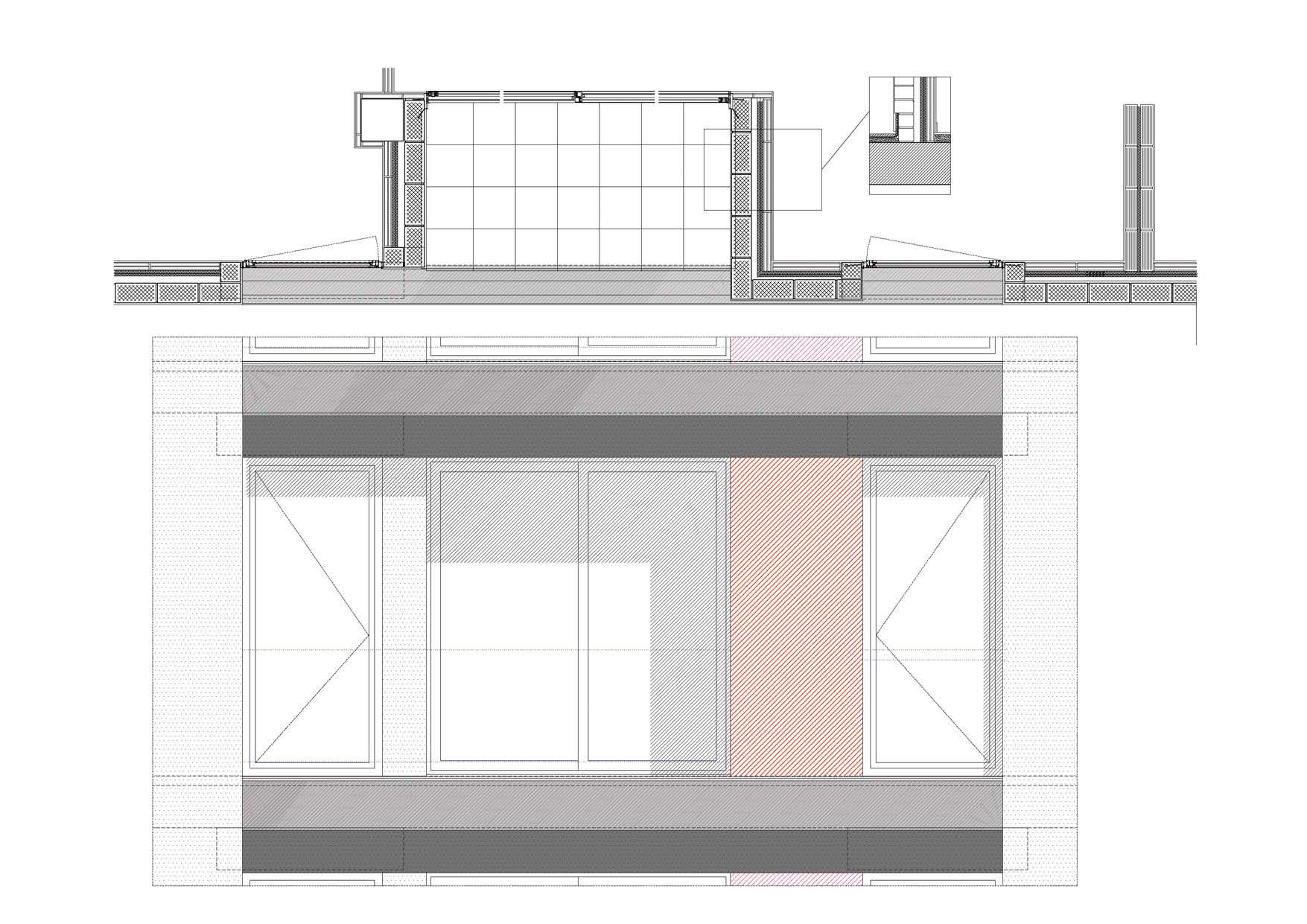 Number of residential units: 29
Typology of users: families, students, other

The lot allocated for this building has an L-shaped plan, opening onto a public square in a recently-constructed area consisting of isolated buildings, which are compact and have relatively small volumes. The natural setting presents views towards the sea, the forest, and the old centre of Tiana, which is on the other side of the valley. The initial idea for the design concept was to enhance this characteristic of the landscape to the highest degree possible, preserving all the views from the lot. Another significant factor consisted of the volumes of the existing buildings, and a façade consistent with this part of the context was designed.

According to the applicable building regulations, the ground floor had to be dedicated to shops, but this was a specification that had no real justification, considering the peripheral, suburban location of the building lot. Once it had been established that it was not necessary to use the ground floor volumes, they were simply left open, in order to give the building as light an appearance as possible, and to open the view to the landscape. No excavations were performed for car parking facilities, which were in part located under one of the blocks forming the project. The only volumes on the ground floor were utility meter rooms, service spaces, and storage areas assigned to the apartments.

The other important decision for the design was to work on a single, standardized scheme for both the blocks in the project. This system was useful for both north-south and east-west alignment. The plan is developed around a spacious, continuous central hall, opening on two opposite façades, with a terrace at each end. The rest of the design is located on the two sides of this central space. This rectangular, modular scheme also enhances the building’s transparency: in other words, it offers a sight line running along its entire length. It is also an efficient method of ensuring effective intersecting ventilation. This building layout makes it possible to exploit the two axes in different ways at different times of year, making use of the areas of shade or sun as appropriate.

As regards materials and construction techniques, these were chosen in such a way as to ensure good spatial and construction quality, achieving satisfactory economy in building costs, while also ensuring a satisfactory energy-saving performance. Conventional systems and techniques are optimized for these objectives, and they have proved to be competitive, cheaper than other more recent or industrialized systems, while using non-contaminated building materials.

The budget for this project did not comprise the application of passive energy-saving systems, even though today they are becoming compulsory for public building projects in Catalonia. The energy performance and sustainability of any building, considered over the whole period of its useful life, as in the case of this project in Tiana, depends primarily on decisions regarding the basic structure and the type of building, and not on the gadgets that may be added. A medium-term consideration for such a project regards the enhancement of the natural surroundings, which are unfortunately deteriorating far too rapidly at the present time.