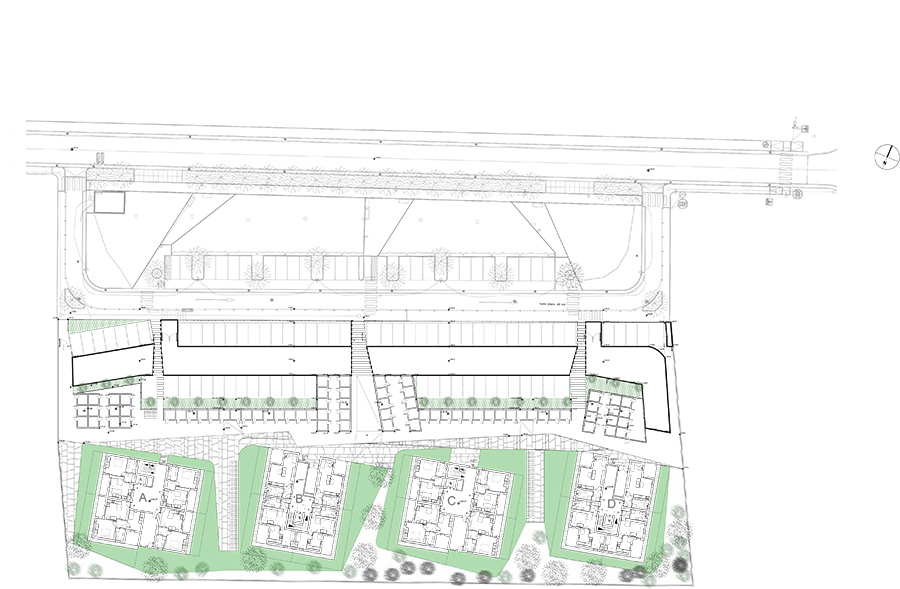 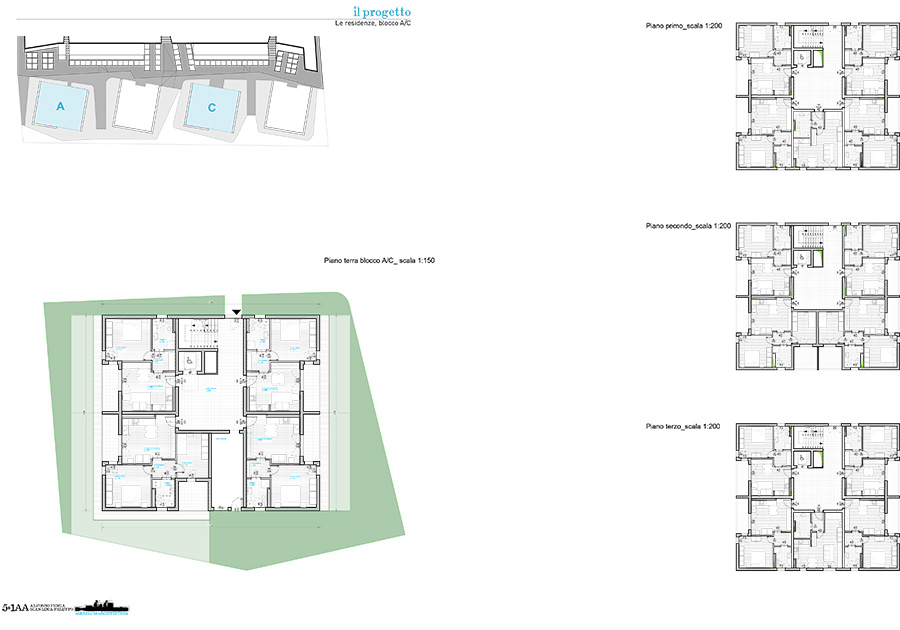 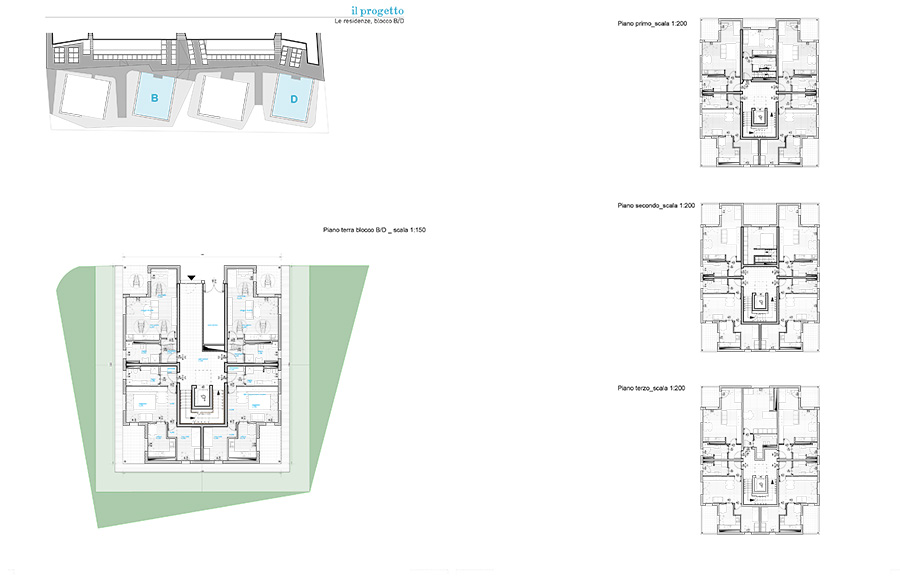 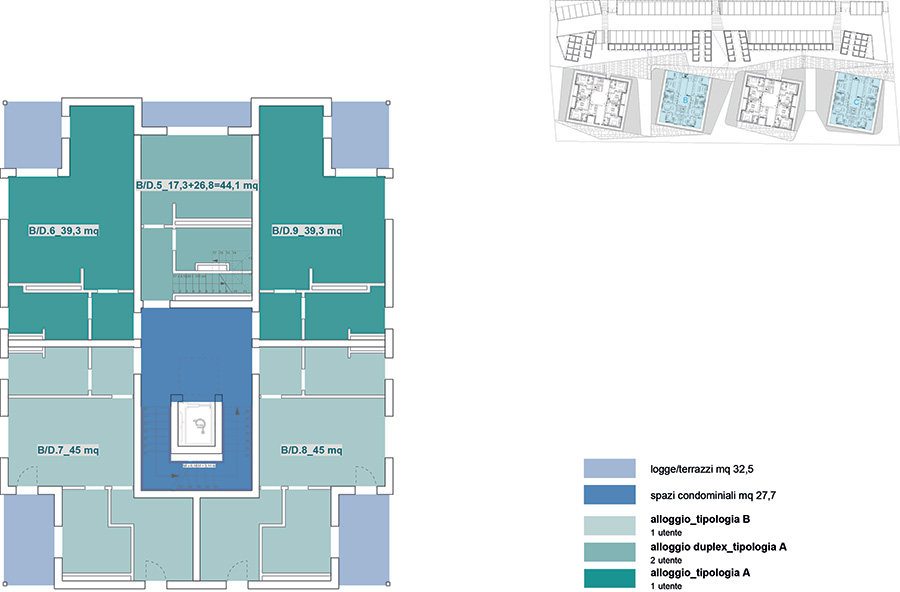 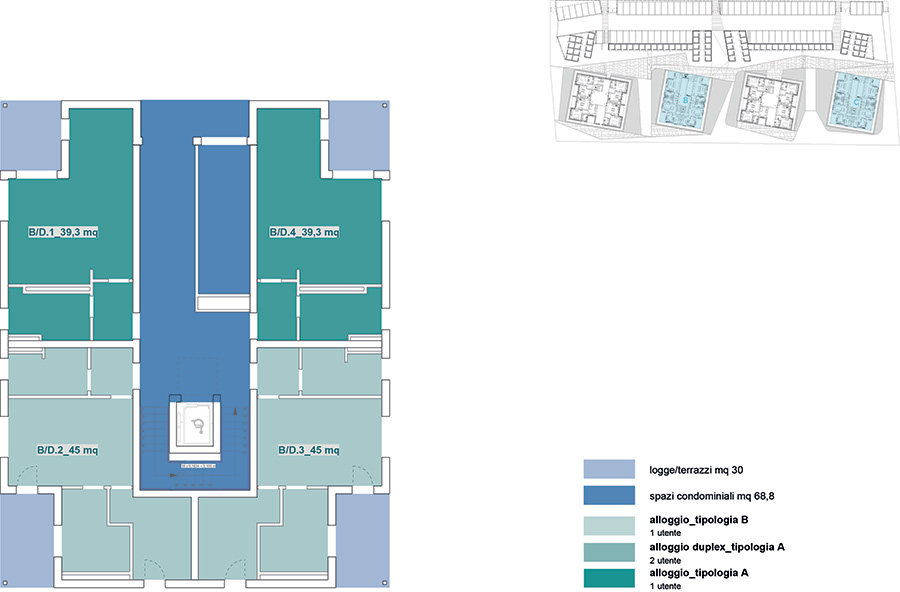 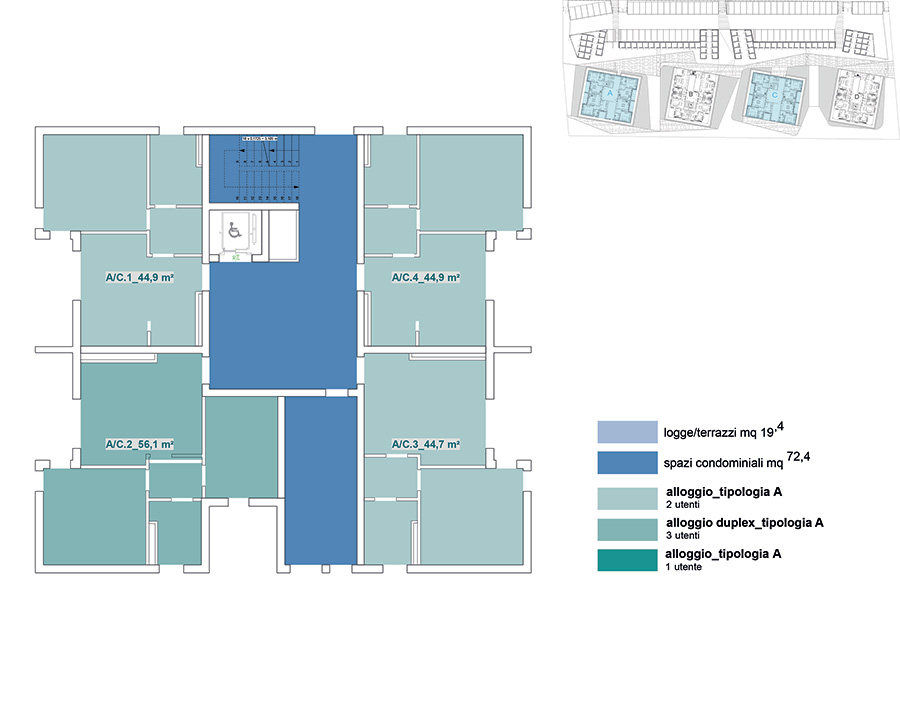 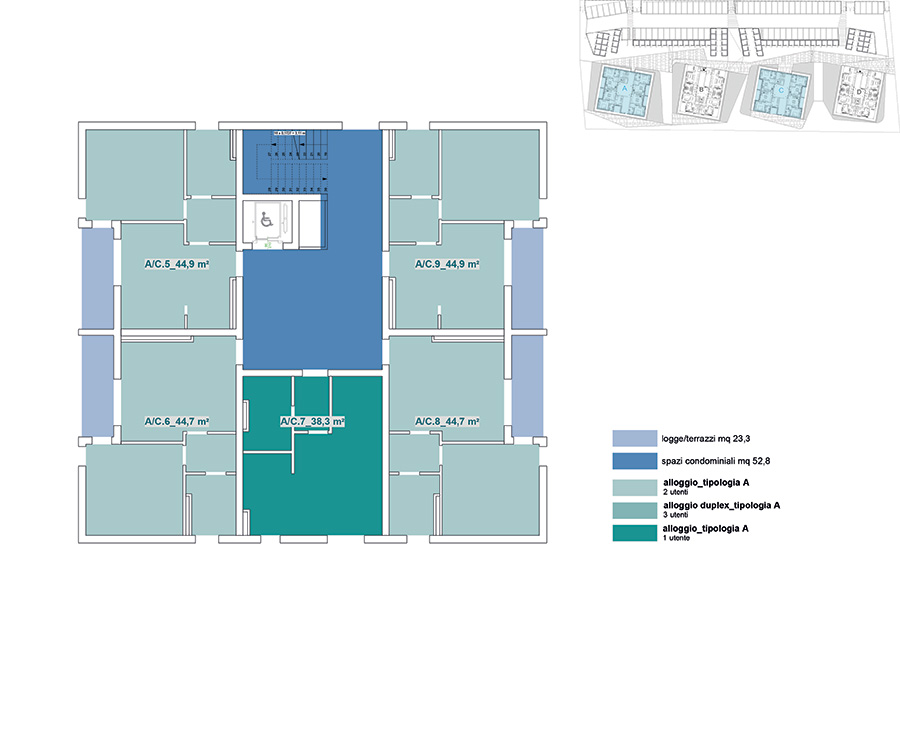 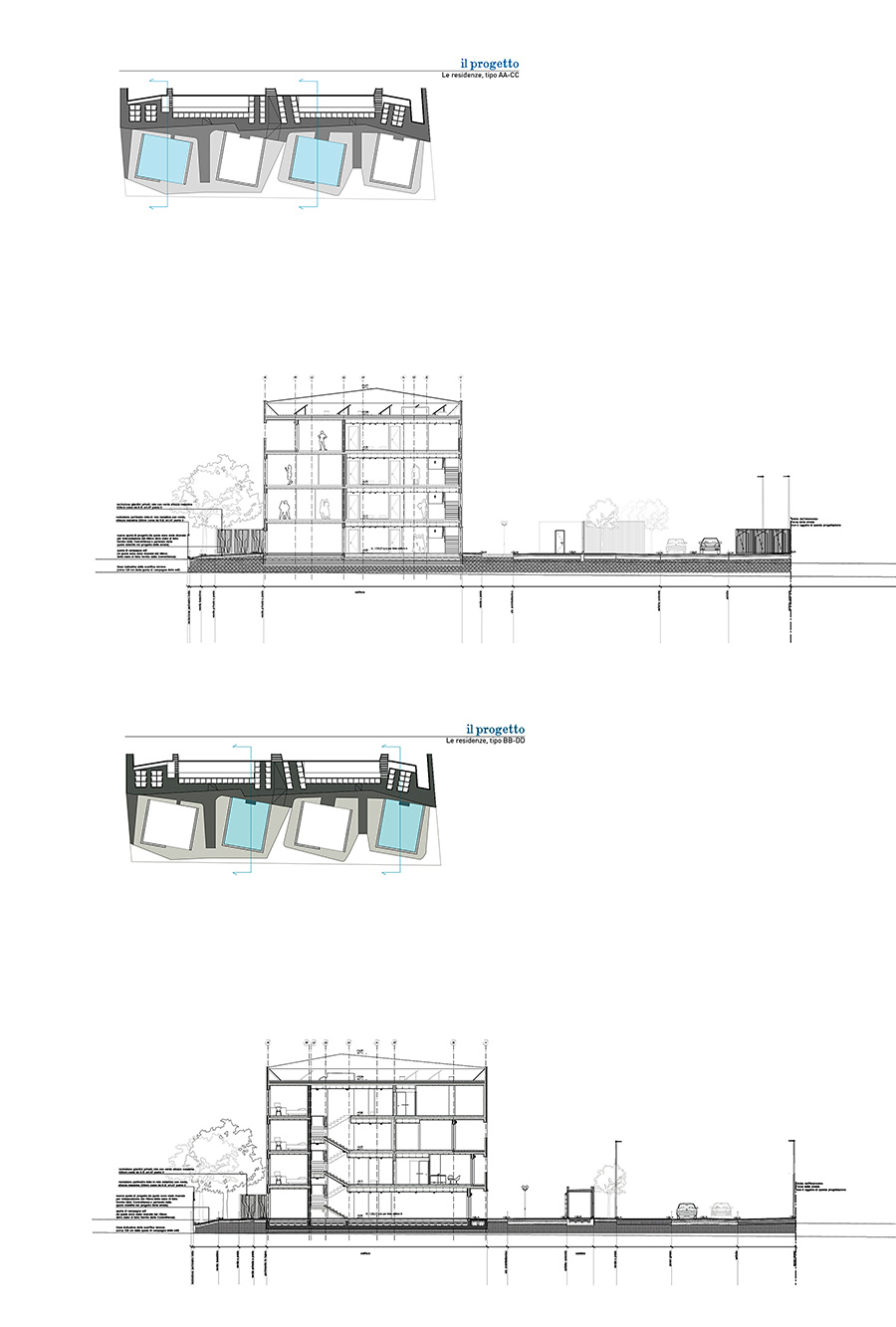 Recommending party
The project has been submitted by: Alfonso Femia

The connection to the site, a visual journey. The project idea comes from the explicit willingness to work to the site and the surrounding landscape. The development of the project, its divisions into separate and successive blocks produced a succession of levels differentially interacting with the environment.

The whole idea is to define an integrated landscape design; variations allow a constant dialogue between the observer and the surrounding nature.

Sometimes static, often changing, the eye follows perceptual sequences differentiated according viewing angles and viewing position. Thus, the place created by the project provides multiple views of the same site and its landscape.

This particular attention to the apprehension of the premises by the look is operated in several directions: use of transparent materials, succession of full and empty spaces, implementation of devices capable of translating in a natural way the hierarchy of spaces, that from individuals become public.

The project then is read by flipping the views in succession, walking on the various ambients, going from the street and the parking area to the base of the cellars, and the pavement treated in a specialized way, the private gardens and the park.

With a classical distribution (base, elevation, crown) the intervention takes on character and specifi city and develops within a unitary design the three elements that structure the project as a whole: the basement-cellars, the elevation-buildings, the crown-profi le covering. The relationship with the street is created using five openings: two mixed use, both vehicular and pedestrian, and three dedicated solely to pedestrians, one positioned centrally with respect to the boundary line and the other two laterally. The demarcation between street and the area of intervention is marked with a light metal fence, whose vertical structure has a transparency that allows both the setting of a limit, and to provide breath to the site that it contains; it is a tangible example of how to mark a limit without needing to insert a visual barrier between the two places.

Relationship with the context, a visual journey.The idea for the project was born from the express desire to create a relationship with the context and the surrounding landscape. In a series of different levels that form the relationships with the landscape, the external arrangements, the subdivision and succession is aimed at building a design that seeks to be inserted into the landscape and dialogue with it sometimes in a unitary way to the eyes of the observer, sometimes according to perceptual sequences designed to make the vision of the place and its landscape always different.Therefore a great deal of attention was paid to the use of transparencies and successions of solids and voids, devices capable of allowing the perception of a hierarchy in a natural way of the spaces that move from the public to the private.The project is to be read taking in the views in succession, wandering, going from the street to the parking area beneath the cellars, to the flooring treated in a specialised way, to the private gardens, to the park.

With a classical distribution (base, elevation, crown) the intervention takes on character and speciﬁcity and develops within a unitary design the three elements that structure the project as a whole: the basement-cellars, the elevation-buildings, the crown-proﬁle covering. The relationship with the street is created using ﬁve openings: two mixed use, both vehicular and pedestrian, and three dedicated solely to pedestrians, one positioned centrally with respect to the boundary line and the other two laterally. The demarcation between street and the area of intervention is marked with a light metal fence, whose vertical structure has a transparency that allows both the setting of a limit, and to provide breath to the site that it contains; it is a tangible example of how to mark a limit without needing to insert a visual barrier between the two places.

THE OUTDOOR SPACES
the element of path just after the entrance, between the parking spaces and those vested in cellars, is characterized by a bright asphalt pavement.
The cellar block is located on the ground floor is a volume, a socket, which precedes the four buildings behind. The structural solution choice for the cellars starts from a multi-layer panel, in order to meet the need to bring the same system of construction of buildings and is complemented by an internal frame, to get the best climatic performances.
This choice of construction is directly derived from a 2-storey building above ground, which characteristics are therefore of high value. The skin of the cellars is made on laminated colored vertical wood, the realization of the block provides a technology similar to that of the buildings, the blades follow a steady rhythm in the positioning of the axes, unlike the variable rhythm that occurs in the color that fades or vibrates.

The sides of this volume are cut according to several directions, creating different perspectives and visual cones that hint the look at what it will be offered by the landscape. Continuing, the flooring is characterized according to two separated figures; one made in wood and the other in architectural concrete, both will address residents to the main entrances of the residential buildings, identifying different path to “territories”: the “public”, the shared and the intimate one.

THE PRIVATE GREEN
Throughout the entire design process, we made attention to the theme of spaces and the layout of the internal green. The south elevation of the buildings overlooking a garden designed in a way which leads to having an allergy free green with ornamental species and species that do not cause allergies.

The usability of these spaces will be provided without limitation. The problem of allergies is increasing, allergies limit the enjoyment of green space designed mostly to be considered only ornamental. For us it is rather important the use and not only the aesthetics, for this reason we believe that this issue should be considered in designing the landscape for the enjoyment of green spaces by those who will use it.
The logic of “allergy free”process is used not only in the design of the park, but also for the second green system, the one dedicated to the ground floor of each building. Looking at the building plans it is clear that the system dedicates a side entrance and to the three other sides, a private gardens with its park, which seeks, between a building and the other, the relationship with the environment inside the lot.

THE RELATIONSHIP WITH NATURE AND THE ENVIRONMENT
The design theme of the contact with nature and the surrounding context of the lot is also reported in the study of elevations: every element of the system is designed in accordance with indigenous materials and colours of the surrounding landscape.

The plaster of facades, burgundy coloured as shades of the earth, is combined with laminated wood elements that make up a game of movements aimed at creating a drawing on all sides of the buildings.

THE ELEVATION OF BUILDINGS

The wood applied to the front, through the dark-light combination projected on the building, gives intensity to a volume that would otherwise be flat. The final of the four volumes has been modified by reprising the background marked by the Maddalena Mountain situated behind the complex, so that the slopes of the roofs watches the prospects in succession, mark among them a broken movement, a line of different heights, the new relationship between building and background.

The use of wood as energy and comfort device, is making always different each apartment and its relationship to the outside. It features the four buildings in a different way, eliminating the indifference of repetitiveness. Each resident will identify himself with his apartment, with his new place to live.

Thanks to the Building construction materials, implants and the use of a solar panels system on the roof, this project is in A Class Energy rating.