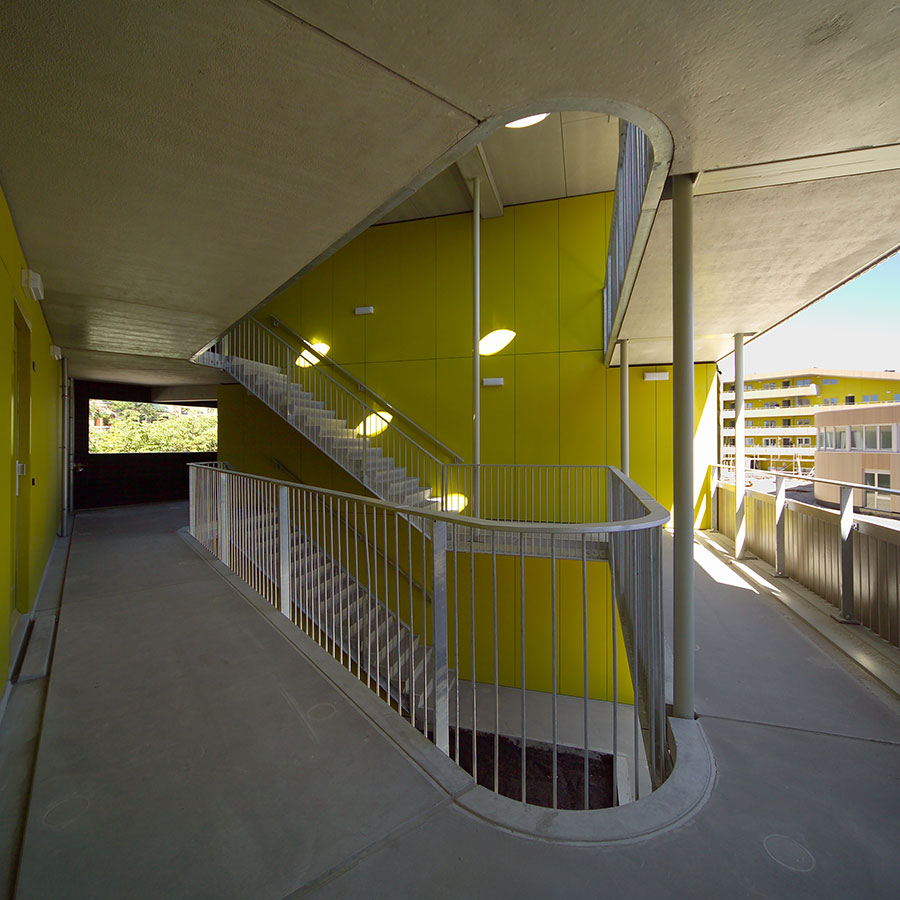 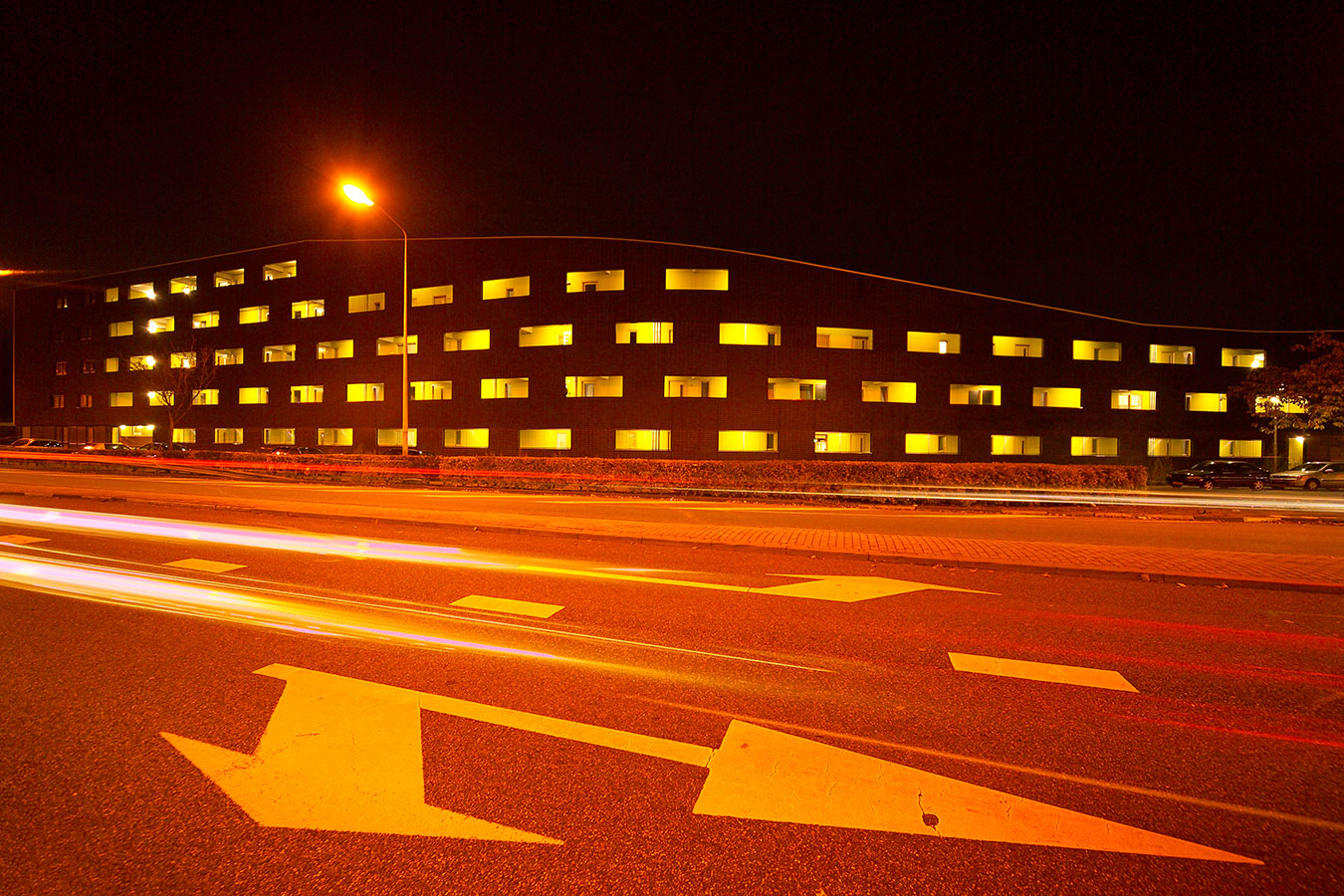 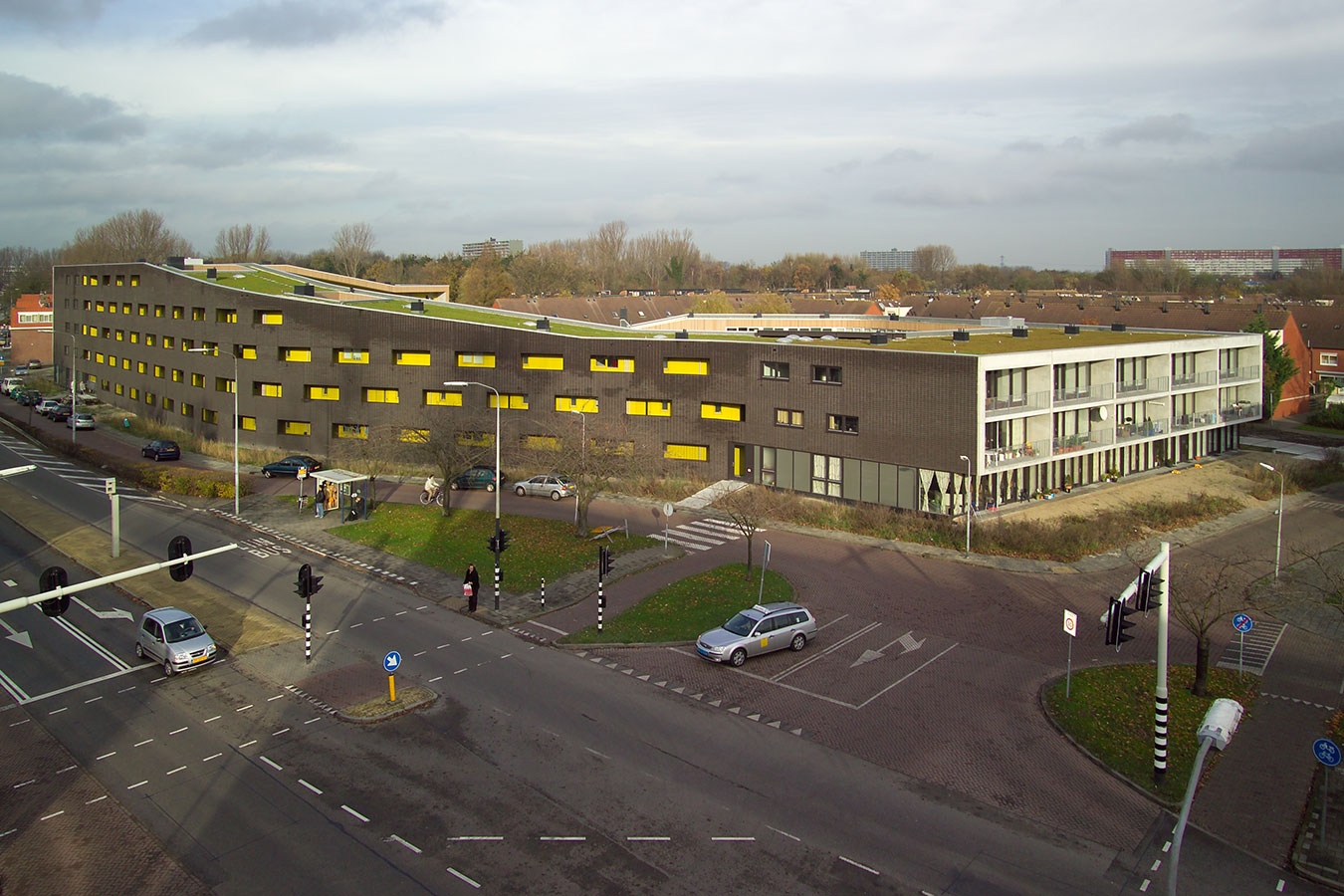 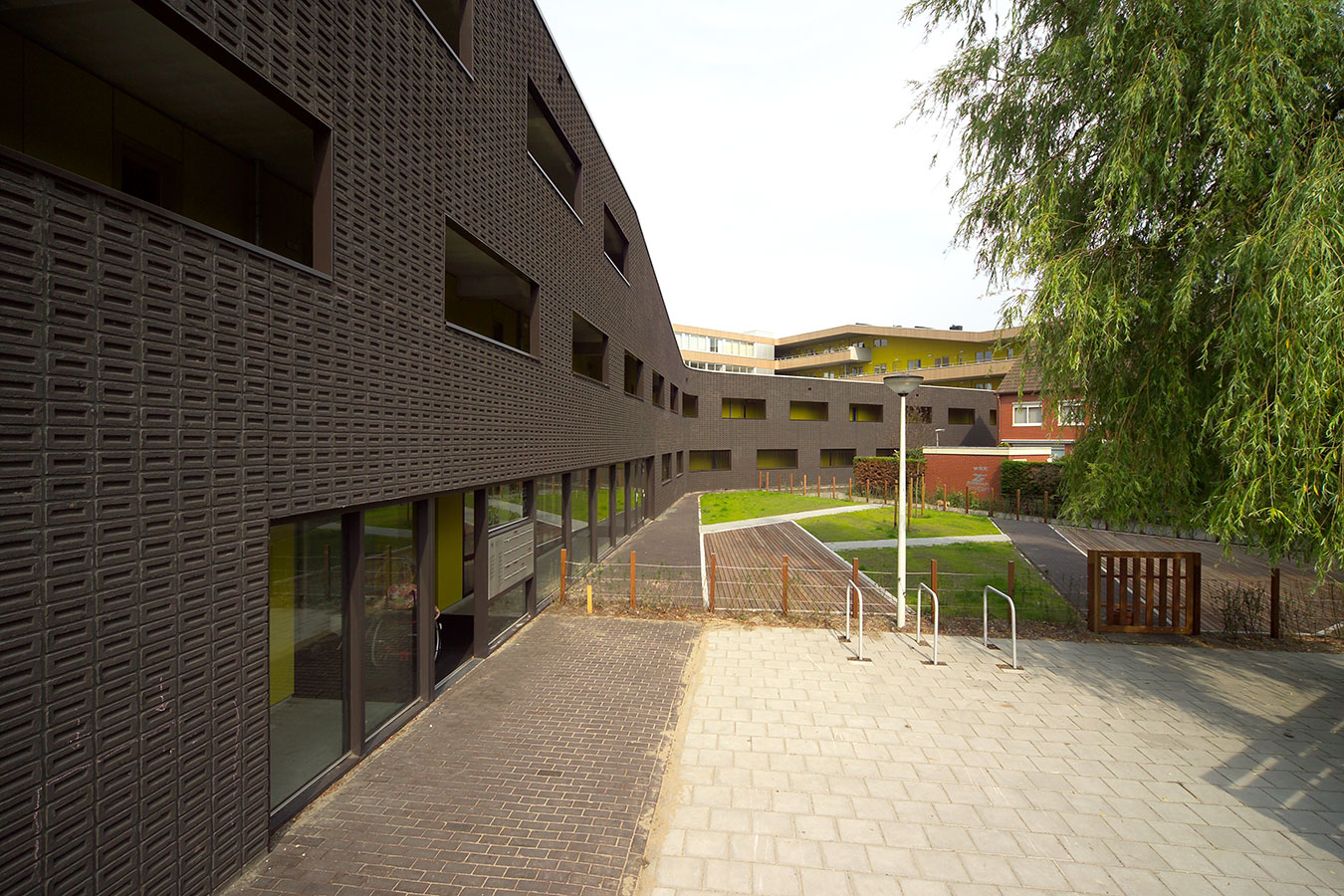 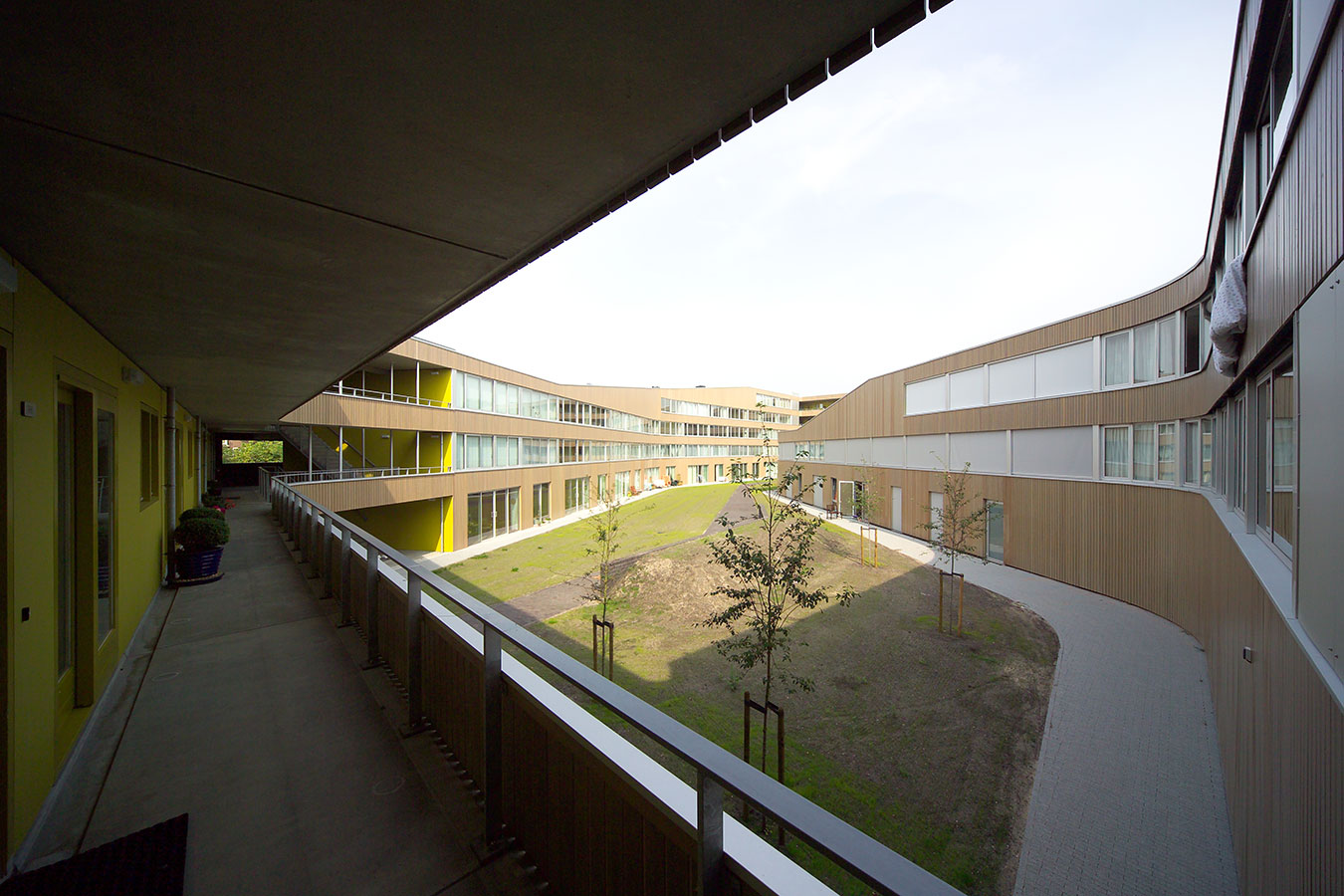 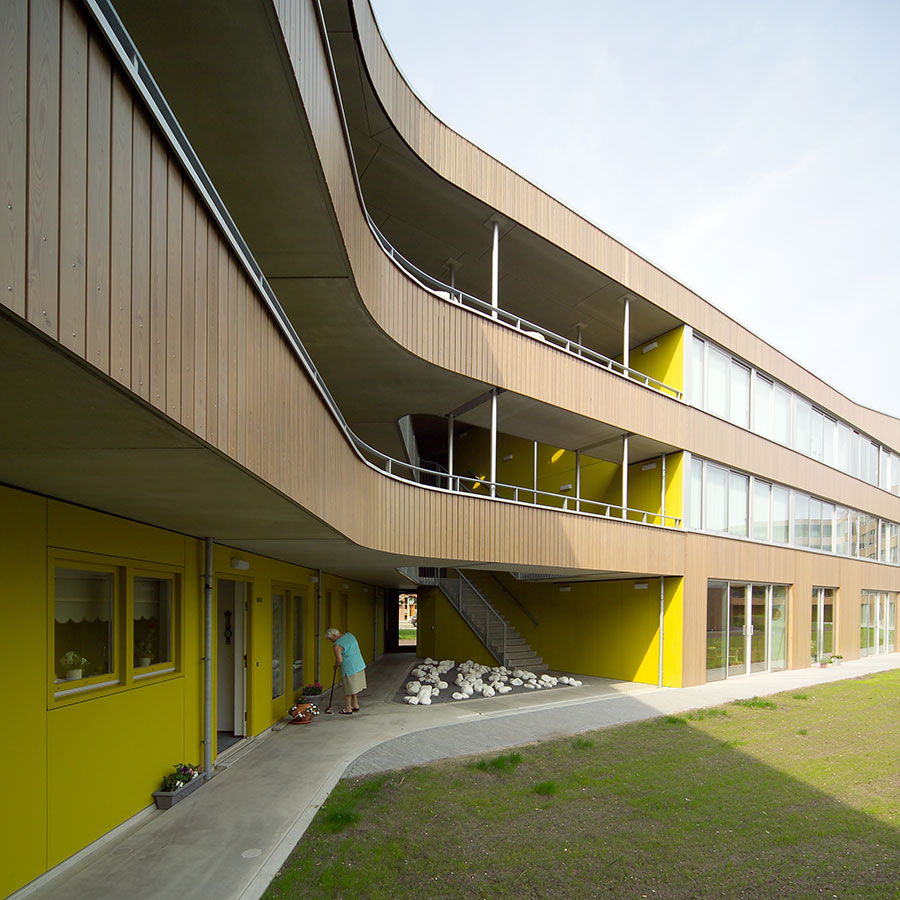 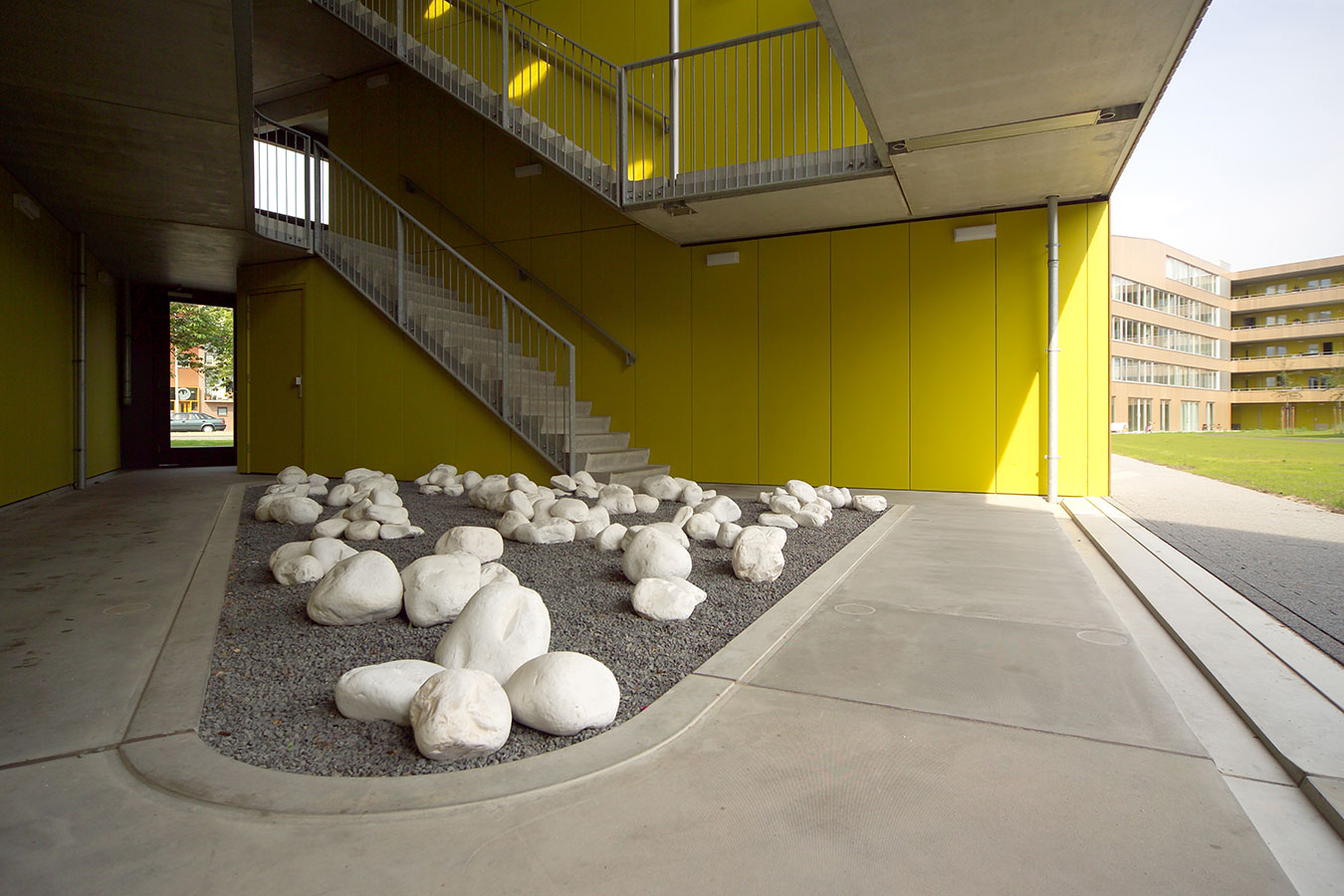 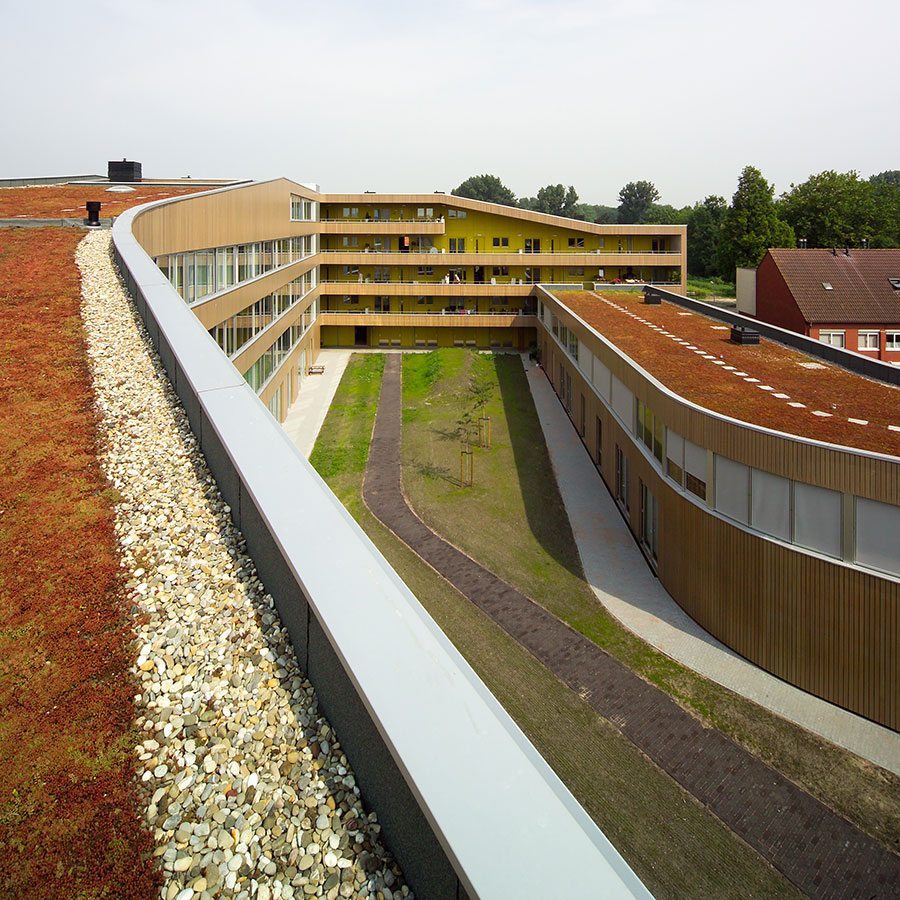 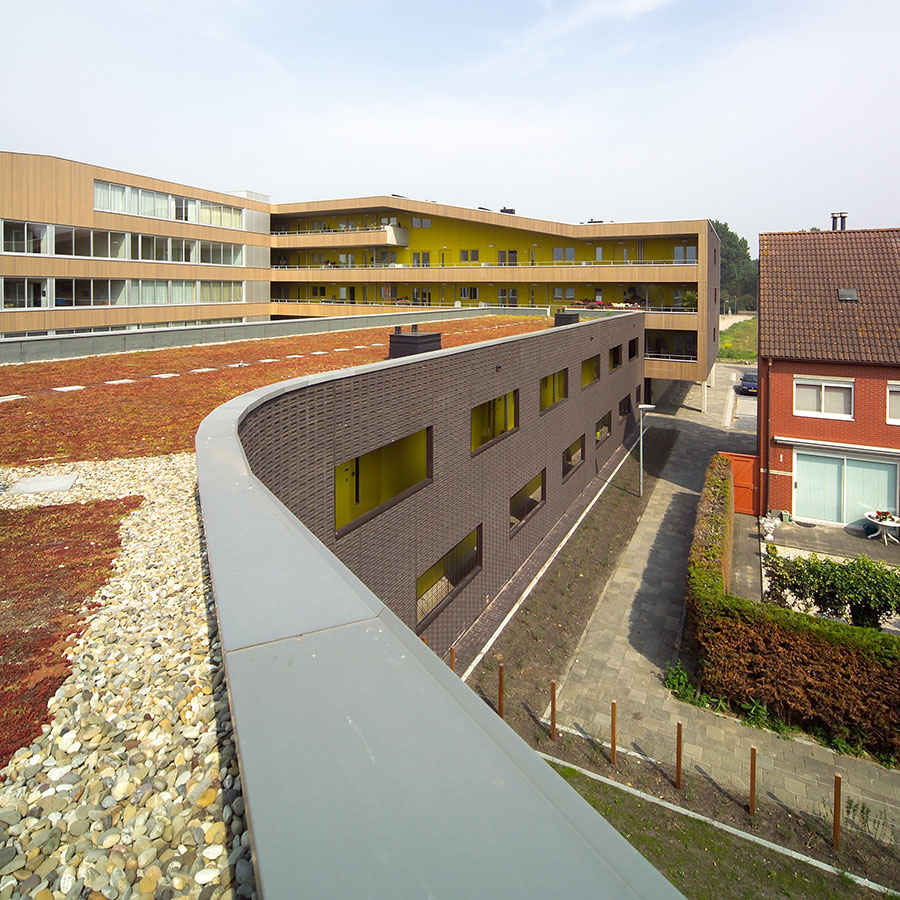 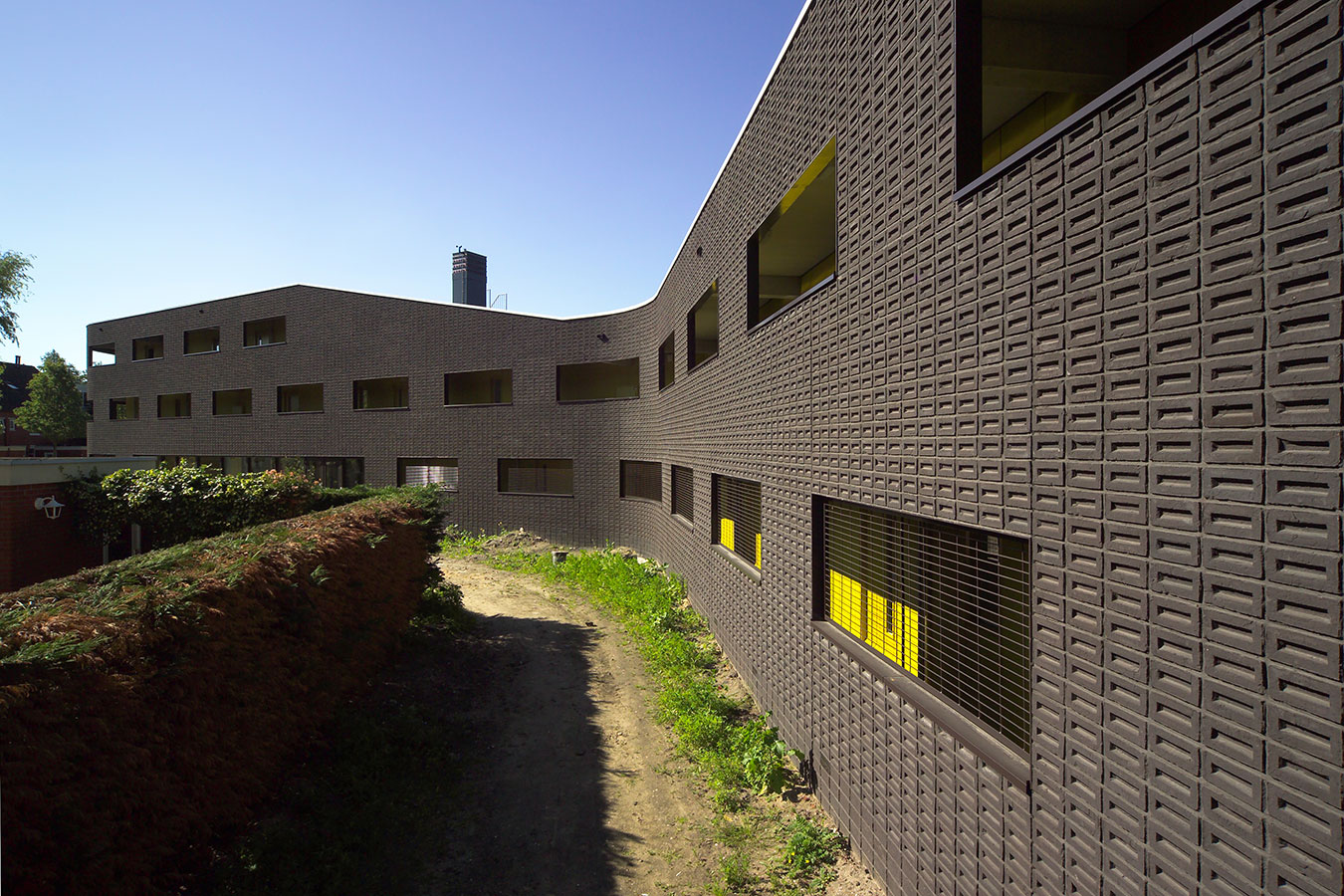 The housing block with 79 apartments in Zaandam nestles itself into its surroundings like a snake into its basket. The block contains rental apartments for the free and the social housing sector as well as 14 service apartments and collective facilities for handicapped juveniles.

The characteristically inclined roofline reacts to its context: a neighbourhood with small row houses on the one side and multi-storey housing slabs on the other side. In order to avoid that the row houses lie in the shadow of the new building a low construction was needed. Nevertheless this didn’t match the amount of required apartments. Therefore we opted for a volume which follows the irregular perimeter of the plot whilst spiralling upwards in height in order to adapt to the neighbouring buildings. Simultaneously this folding of the building volume encloses quiet courtyard.

Since it is situated next to a busy road, the typical Dutch concrete bay structure of the housing block is wrapped with a rough skin of black bricks. These bricks laid on their side expose their dented surface, emphasizing their tactile quality which reflects the sculptural character of the building on a smaller scale. The actual thinness of the outer skin, visible in the openings of the facade, makes a surprising contrast to its robust appearance.

Behind the brick skin yellow-green clad walls run along the galleries which give access to the apartments. The latter are mainly orientated to the quiet courtyard which gives a warm and inviting appearance due to the wooden cladding and its soft curves – according to the motto “rough shell, soft core”. Only at its narrow ends the block is stripped off its brick skin revealing its domestic contents to the passers-by. Here the apartments either dispose of outwards orientated balconies or of extra large galleries along the inner courtyard that also act as balconies. This way the best is made of the north-south orientation.

The courtyard is designed as a collective garden which is accessible to all residents. For the handicapped apartments there is a small additional garden eastern perimeter the block. Furthermore the inclined roofscape is covered with moss plants in order to give the upper apartments an attractive view.

Thanks to the inclined roof and the curvy forms on the in- and outside three the housing block not only contains a lot of different apartment types – partially with roof terraces ore extra ceiling heights – , but also displays a different appearance from all perspectives. For its perception time and movement are key factors: in order to understand the building as a whole you have to move trough and around it. The block received its name “Salamander” due to the yellow cladding along the galleries which – especially at night – are illuminated brightly behind the opening of the outer black skin.

These juxtapositions constitute the “Leitmotiv” of the sculptural building where robust elements contrast with soft, dark with colourful, industrial with handcrafted and sober with playful ones.